Daytona Beach PD will use VICTORY Motorcycles this fall 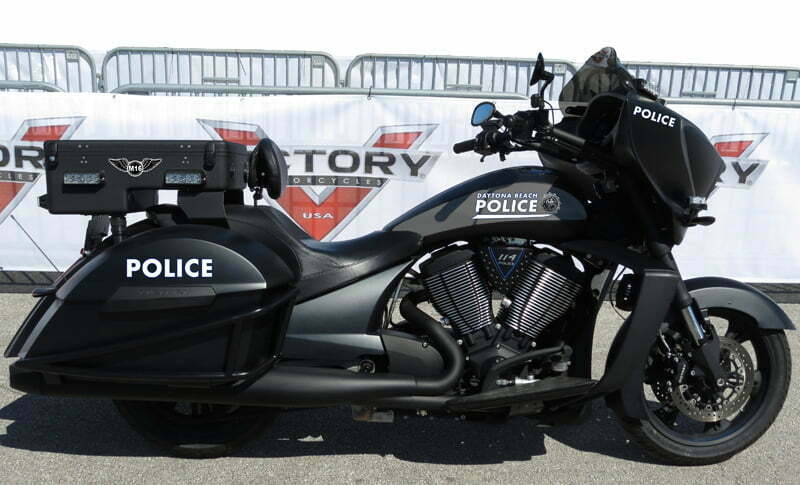 The Daytona Beach Police Department, an agency that protects and serves in a city that plays host to major events such as Speed Week, the Daytona 500, Spring Break, and Bike Week, will begin patrolling on Victory Police Motorcycles starting this fall.

The Daytona Beach City Commission voted unanimously in May to support the recommendation of Police Chief Michael Chitwood and approve the switch to Victory Police Motorcycles starting Oct. 1, 2014. The police department’s motor officers will be patrolling on a fleet of 12 Commander I VPM models, which are based on the Victory Cross Country
.
The department is switching to Victory Police Motorcycles after its current lease to use Harley-Davidson motorcycles expires. “Every other year our agency ordered new motorcycles, and we were at the mercy of whatever new advances were made to the bike itself, which usually wasn’t much,” said highly decorated DBPD Traffic Unit Officer Jason Kilker. “By contrast, Victory Police Motorcycles provided a two-page checklist of law enforcement-only options that were available for our officers to select what suited them best. These options included, but were not limited to, full-size AR-15 rifle racks, heated grips, and a mind-blowing LED light package that no one can match.”

A growing number of law enforcement agencies across the United States and Canada are switching to Victory Police Motorcycles because of the motorcycles’ outstanding performance, reliability, and long-riding comfort. American-made Victory Motorcycles deliver an unmatched combination of power, maneuverability, cargo capacity, low maintenance costs, and ergonomics that suit officers spending long hours on the job.

“Victory Police Motorcycles focuses exclusively on the law enforcement industry with officer safety being Priority One,” said Victory Police Motorcycles CEO Nita Buckner. “Our continual introduction of new safety enhancements is a testament to this commitment to safety.”
Victory Police Motorcycles is a Tucson, Arizona-based company that acquires motorcycles from Victory and equips them to suit the specific needs of individual agencies. The VPM staff typically equips a Victory Cross Country, Cross Roads, or Victory Vision with equipment such as lights, radio, and siren, a secondary battery to power that electronic equipment, and custom paint that features the agency’s logo. Additional accessories can include tip-over protection, a skid plate, firearms and radar gun holsters, alternate windshield styles, and more.
Because every Victory Motorcycle delivers industry-leading power, braking, and handling, VPM does not need to make any performance or handling modifications to the motorcycles it provides to law enforcement agencies.

“We admire the great work of the Daytona Beach Police Department and are excited that they will soon enjoy the numerous competitive advantages the Victory Motorcycles provide,” said Steve Menneto, VP Motorcycles for Polaris. “It’s rewarding to have such a world-class department choose Victory Police Motorcycles. The Daytona Beach Police Department (DBPD) will lease a fleet of 12 Commander I models, each of which equipped with LED lights, a radio box, and a siren, and they will feature the department’s striking custom paint scheme and famous logo. Volusia Motorsports, the Victory dealership in New Smyrna Beach, Florida, will provide service and regular maintenance for the fleet.

The Daytona Beach Police Department serves a city that is located on the Atlantic Coast with the “World’s Most Famous Beach,” a city that is a year-round vacation destination for visitors from around the world. The department is especially busy during several major events held in Daytona Beach each year. Daytona International Speedway is the site of several weeks of car and motorcycle racing activity each year, as well as numerous non-racing activities. Plus, the city has long been host to multiple Bike Weeks and Spring Break celebrations that attract tens of thousands of visitors each spring.
Starting in October, famous routes in the city such as Main Street, Beach Street, International Speedway Boulevard, Route A1A, and more will be patrolled by DBPD motor officers on Victory Police Motorcycles.

Victory Police Motorcycles is a Tucson, Arizona-based supplier of Victory motorcycles equipped for use by law enforcement agencies. Each VPM vehicle is equipped to meet an individual agency’s specific needs and provide officers and agencies with the legendary Victory performance, reliability, low cost of ownership, cargo capacity, and comfort. Learn more at VictoryPoliceMotorcycles.com

Harley-Davidson just dropped off the latest Hot Bike test machine at our offices, the Dyna Low Rider FXDL . We […]

We all know baggers are the big deal right now, right? Well, nowhere was this more evident than at the […]