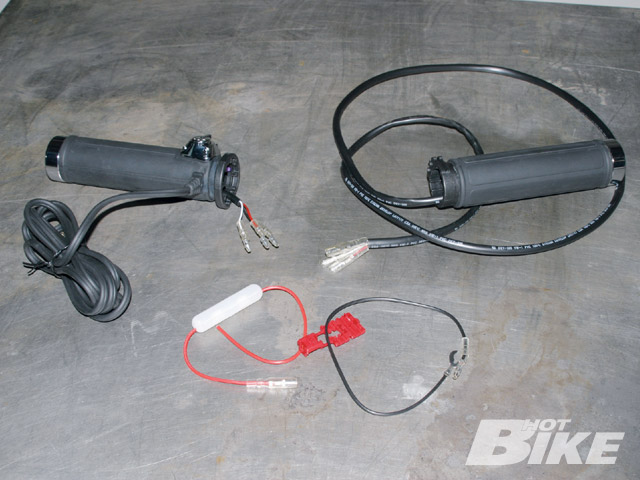 1. Drag Specialties Heated Grips ($149.90) come with everything necessary to install on practically any bike from ’73-’08 (except for ’08 dressers and bikes with air assisted forks). The grips slip onto 1-inch bars and feature a rubber gripping area with chrome tips. As you can see each grip has a wiring lead attached to it (clutch side on left, throttle side on right). 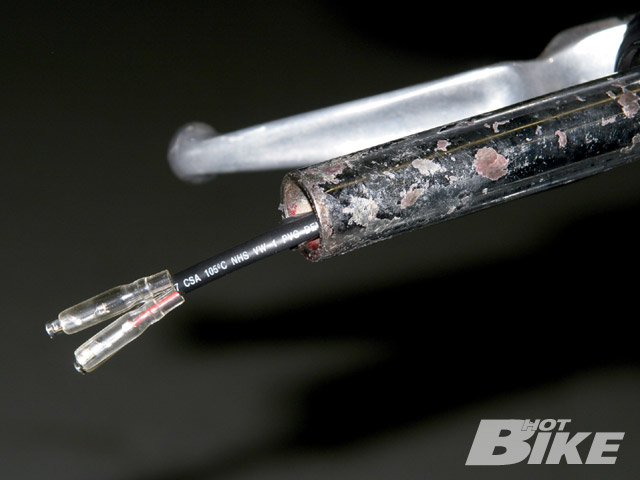 2. Installation was pretty quick and easy. To begin, we loosened the throttle and idle cables and removed the stock right side (throttle) grip as well as the stock left side grip. The Drag Specialties throttle grip has a wire lead that needs to be fished internally through the bars to the left side. We used a long piece of wire to guide the lead to the other side. Then we cleaned up the adhesive from the stock grip. 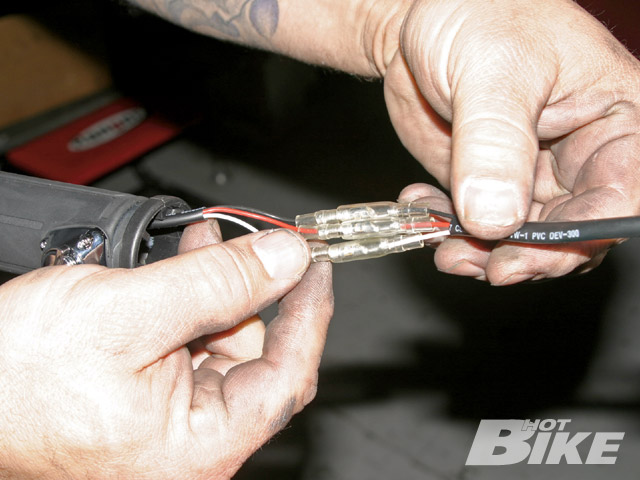 3. The left side grip has a wire lead that plugs into the right side. There are three wires for each lead (red, white, and black) we simply connected the color coordinated wires and then slipped the excess wire back into the bar as we slid the left grip onto the bar. As you can see each wire connection has a clear cover to keep the wires from arcing. 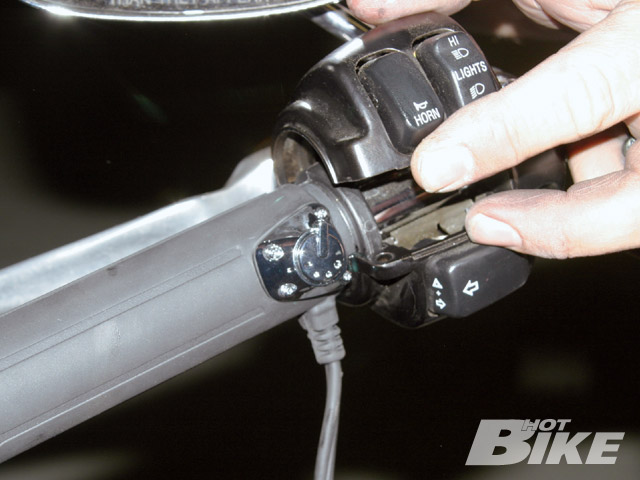 4. The left grip was then slid into the control housing, and then we tightened up the left and right side control housings. The left side grip has an external wire lead (main harness) that was routed along the handlebars and down to the tank. The lead was then fed underneath the tank to the battery box. 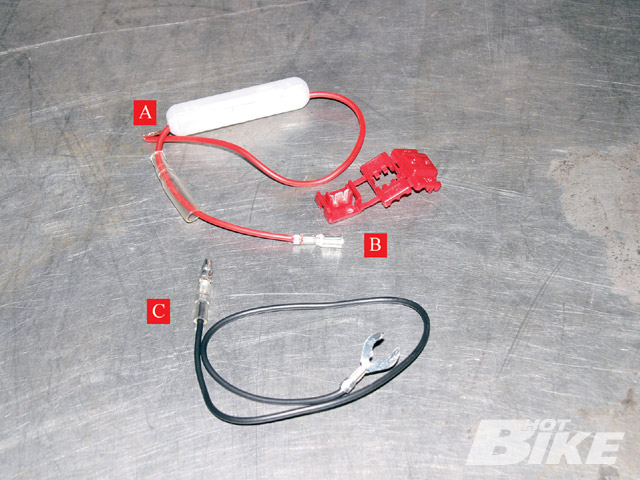 5. After removing the seat we disconnected the negative battery terminal. Depending on your specific setup the final wiring may vary. The instructions directed us to attach the supplied red extension wire with the inline fuse box (A) to the red wire of the main harness. Then use the supplied connector (B) to fasten the red extension wire to the 12v accessory wire. Then to ground, we attached the black extension wire (C) to the black wire of the main harness and then fastened the terminal to the negative battery post. 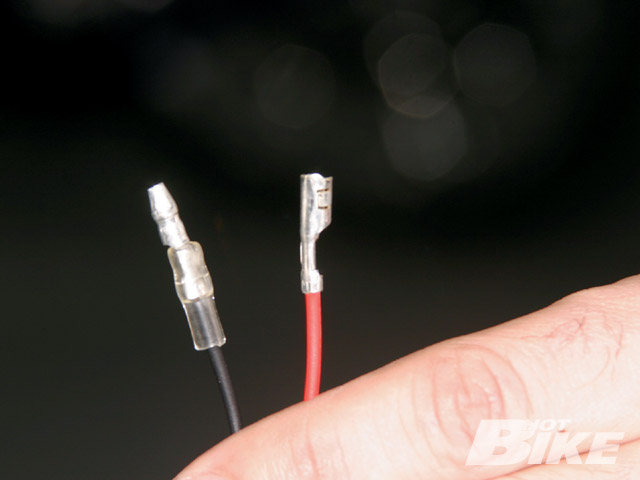 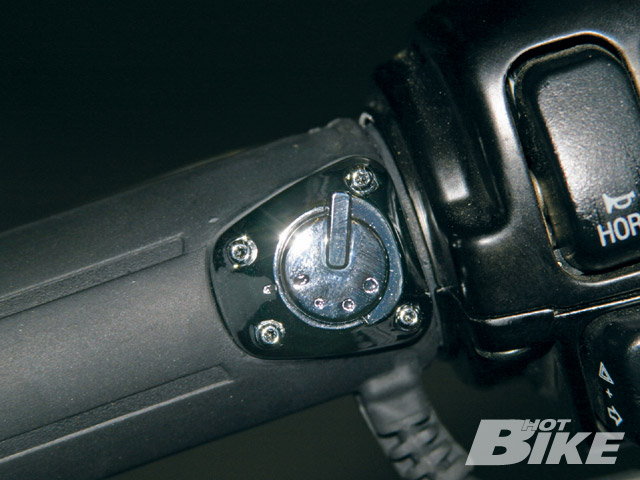 7. The left side has the controller to operate the grips. There are four settings on the dial. The dial turns clockwise. The first setting is the off position (seen here), next is the low setting, then medium heat, and finally the highest heat setting. 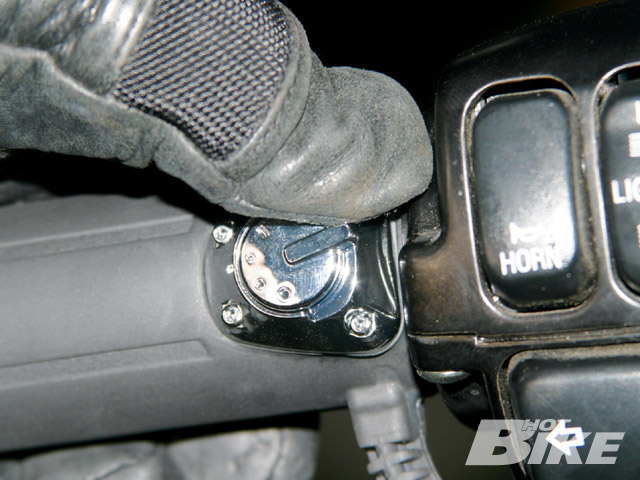 8. As you can see, the dial has a slightly raised tab so that you can easily operate the system with gloves on. 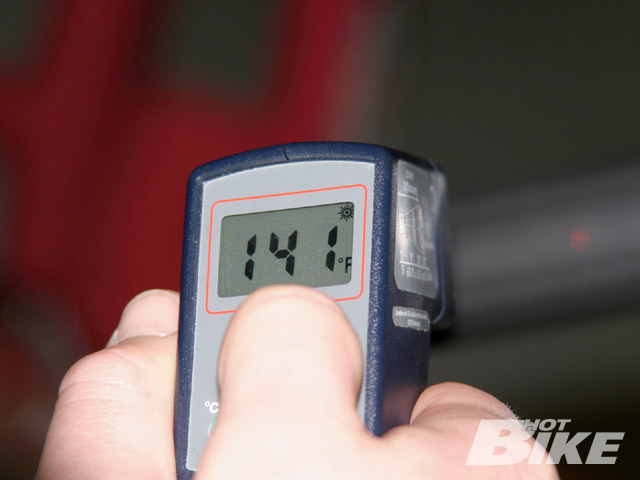 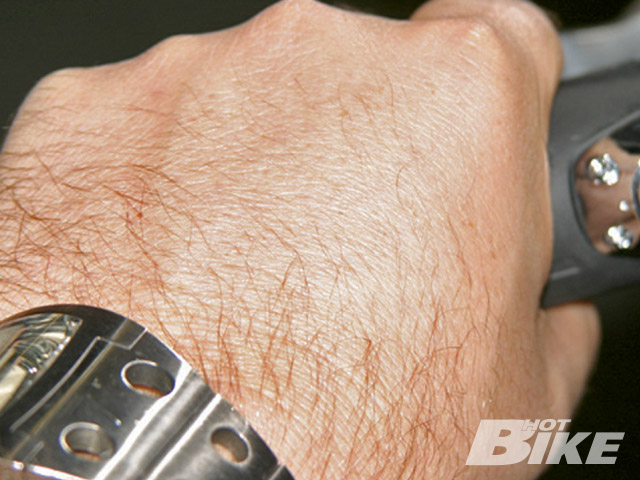 11. However, with gloves on, we could feel how the highest setting would be beneficial once we were actually riding in the freezing temps, especially when we factored in the wind-chill of cruising at 60-plus mph.

There’s nothing like getting up before first light, slipping out of bed without disturbing the wife (or whoever you may have snuck home the night before), and tip toeing into the garage for a peaceful solo ride as you watch the sun emerge from the eastern horizon. With no one else on the road, the gold and red glow of the sun reflecting off the roadway lights your path to what seems like oblivion. The only sounds you hear are the thump of the motor and the growl of your pipes as you imagine yourself accelerating into eternal bliss. You feel like you could ride forever.

But then, five minutes into the ride, pins and needles start to jam themselves into every fraction of an inch of your fingers. A minute later you realize your hands have turned to large lumps of ice that would shatter into a million pieces with the slightest bump from the tiniest insect. Even while wearing your favorite gloves, your fingers, wrists, and arms essentially become paralyzed from the cold wind-chill, so much so that you can’t even let off the throttle to pull over and warm up. You have a few options; keep riding and hope that the temps eventually pick up and thaw your spindly ice cubed fingers, or ride till you run out of gas.

There is another option, install a set of heated grips. While the scenario above may be a little over exaggerated, just think how many times you’ve set out on what seems like beautiful day ride, only to get caught in some freak rainstorm. Or worse, you or your riding buddy broke down and it wasn’t until well after a mid-March sunset that you were finally able to make that 150 mile trek back home.

We almost always ride with gloves on, yet still have run into numerous occasions where we could have definitely used a set of heated grips to make the journey much more enjoyable. Well, this winter, we finally broke down and bought a set that we found in the Drag Specialties catalog.

[email protected] A while back I was spacing out watching TV when something caught my attention. At the bottom of my […]

Speed’s Spotlight | Service With A Smile!