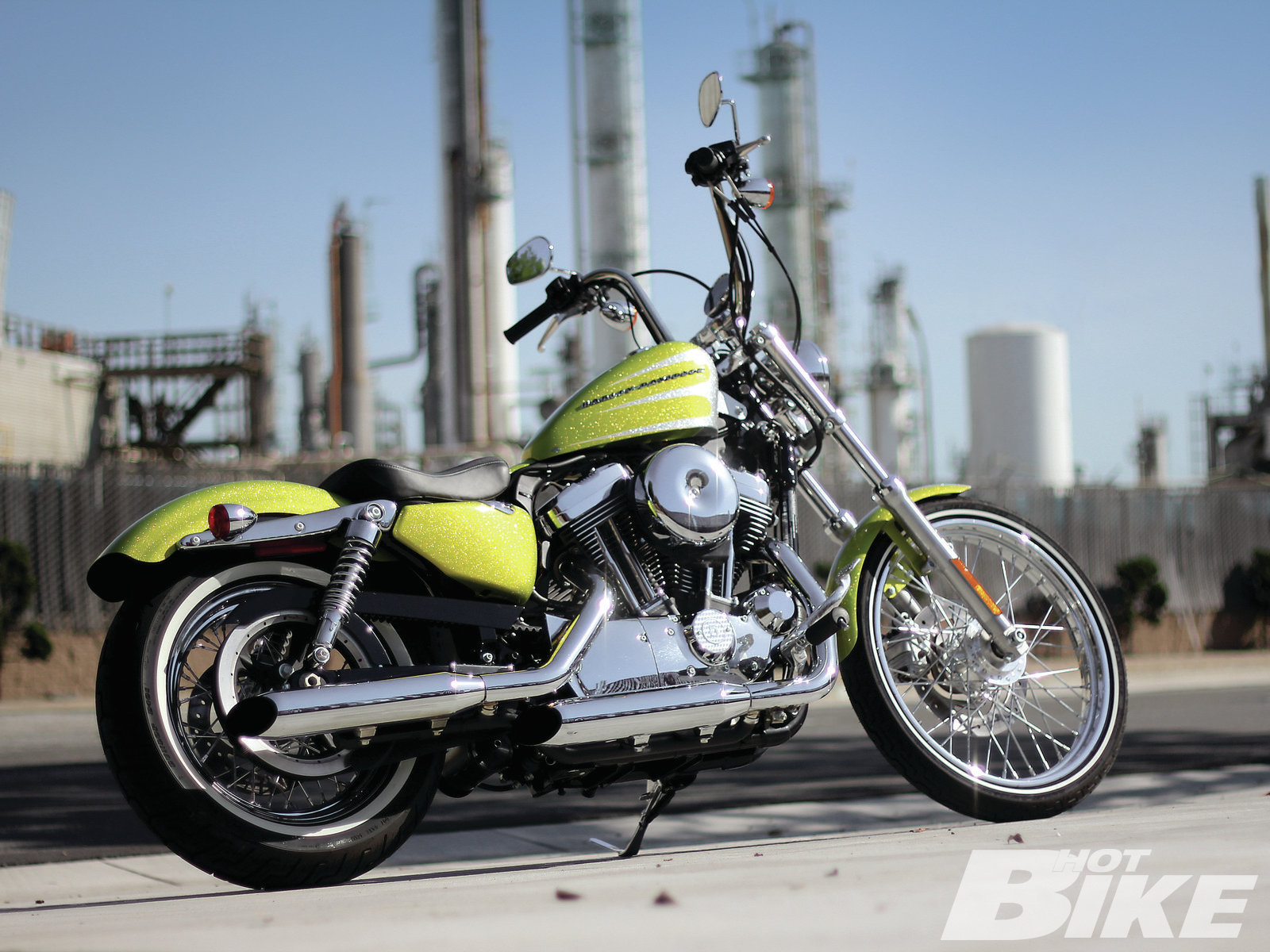 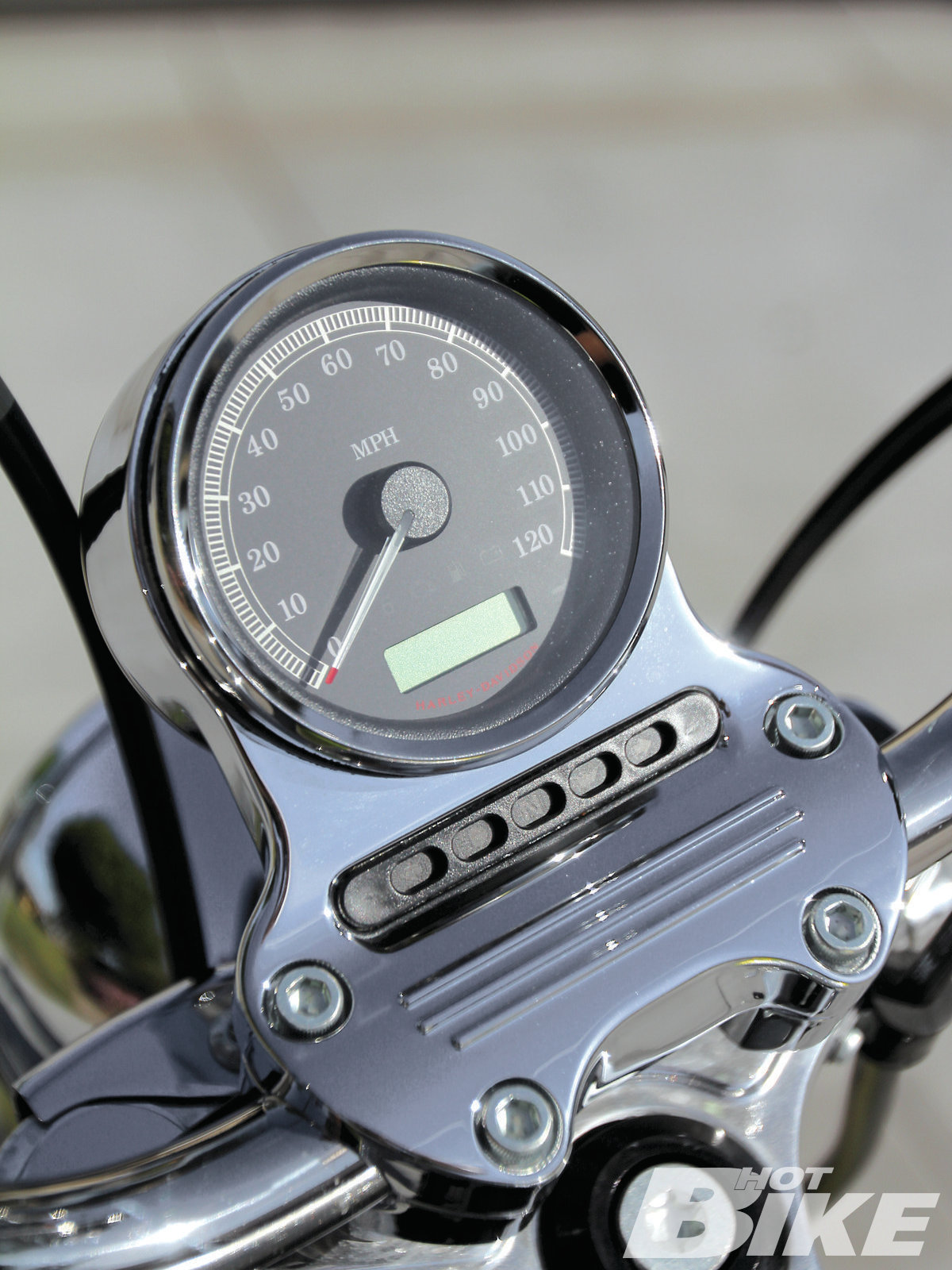 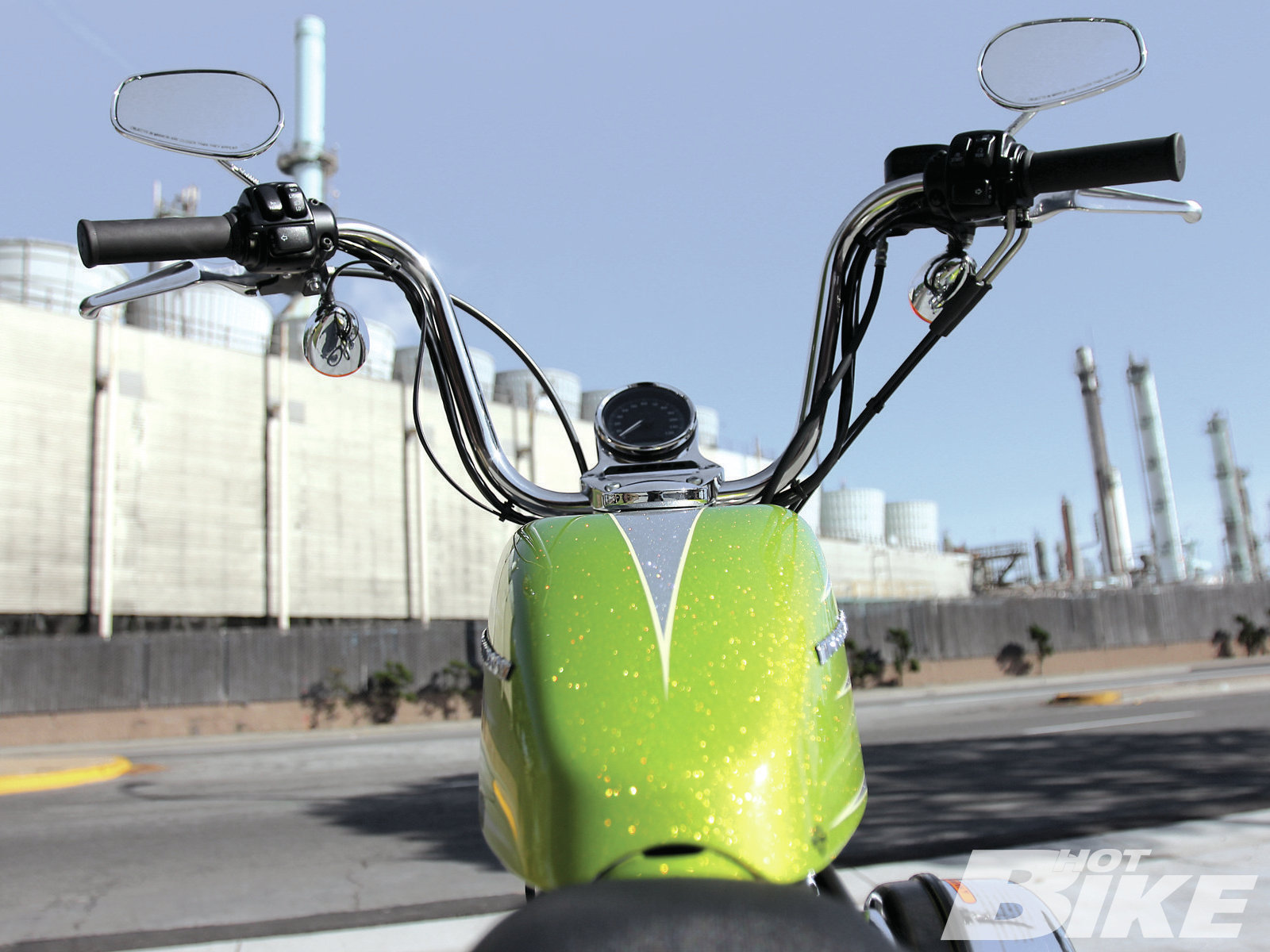 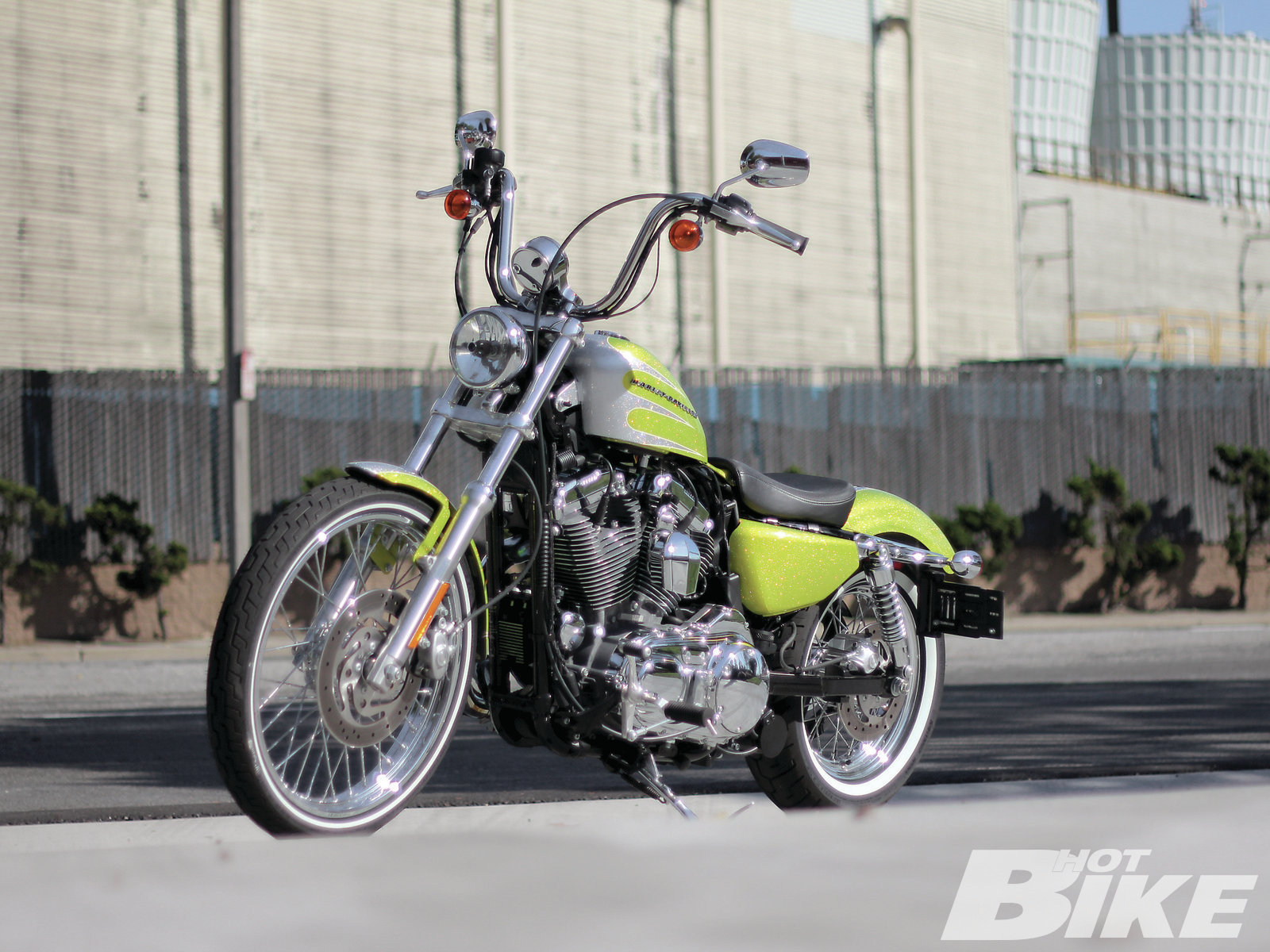 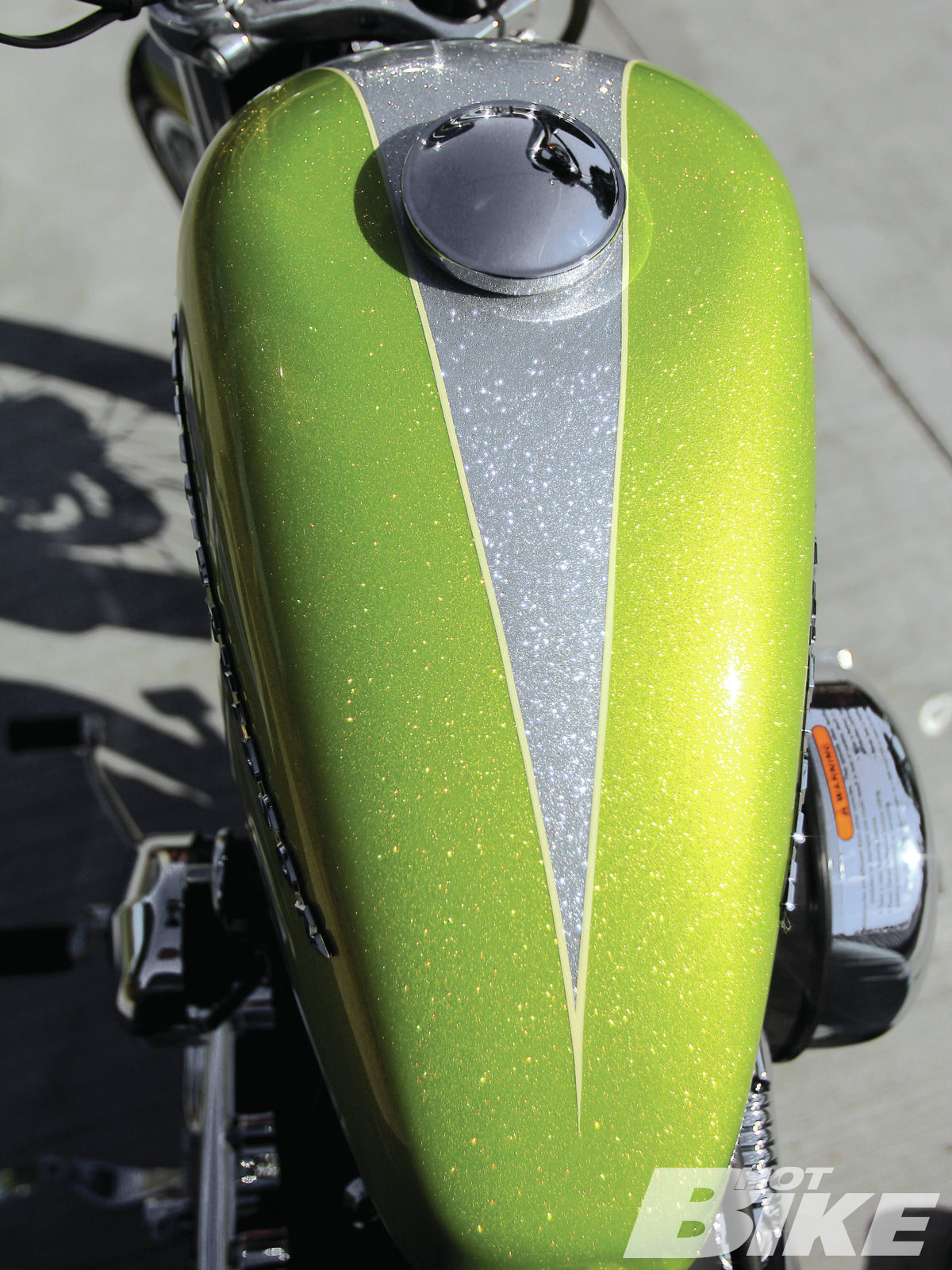 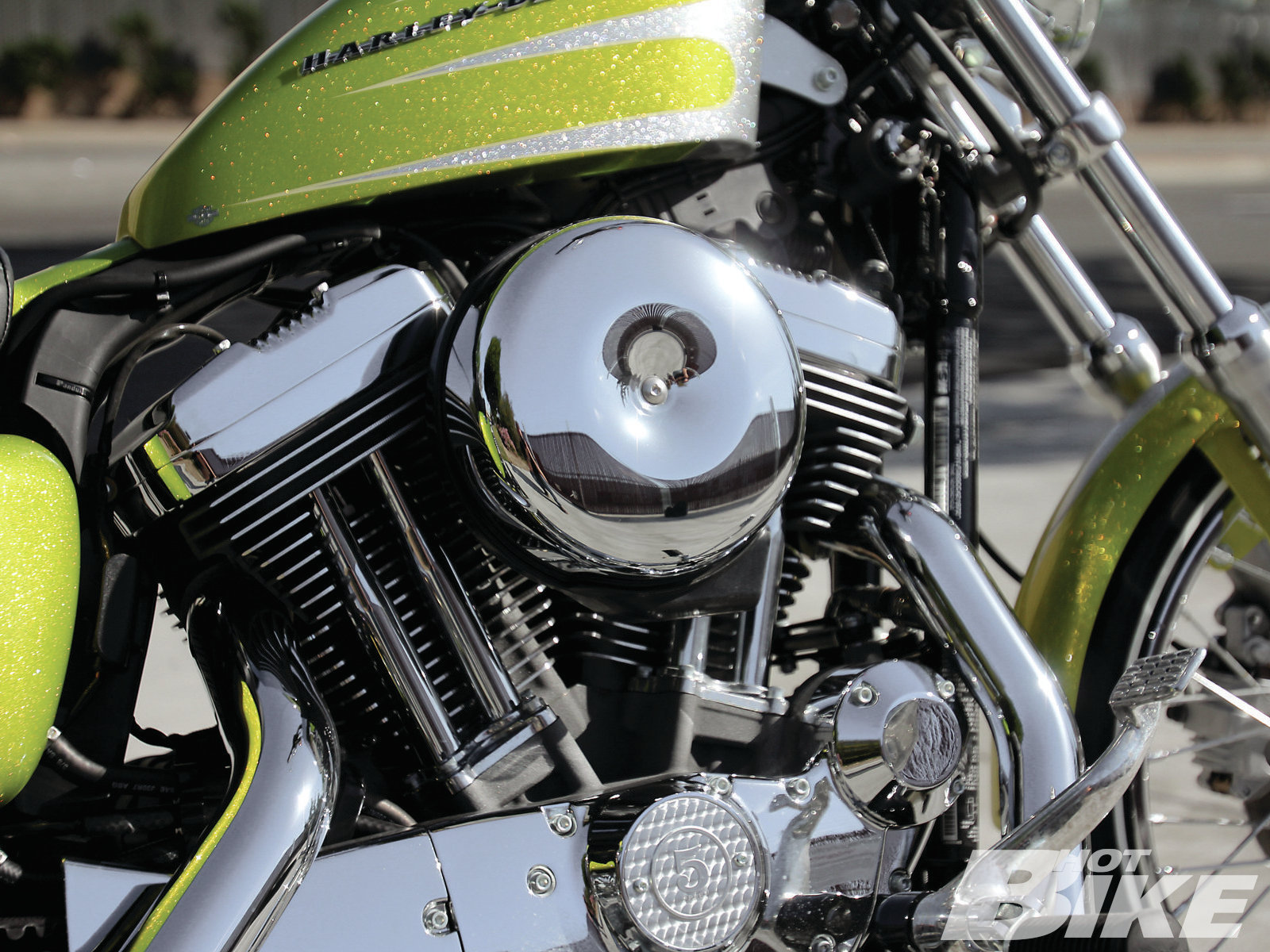 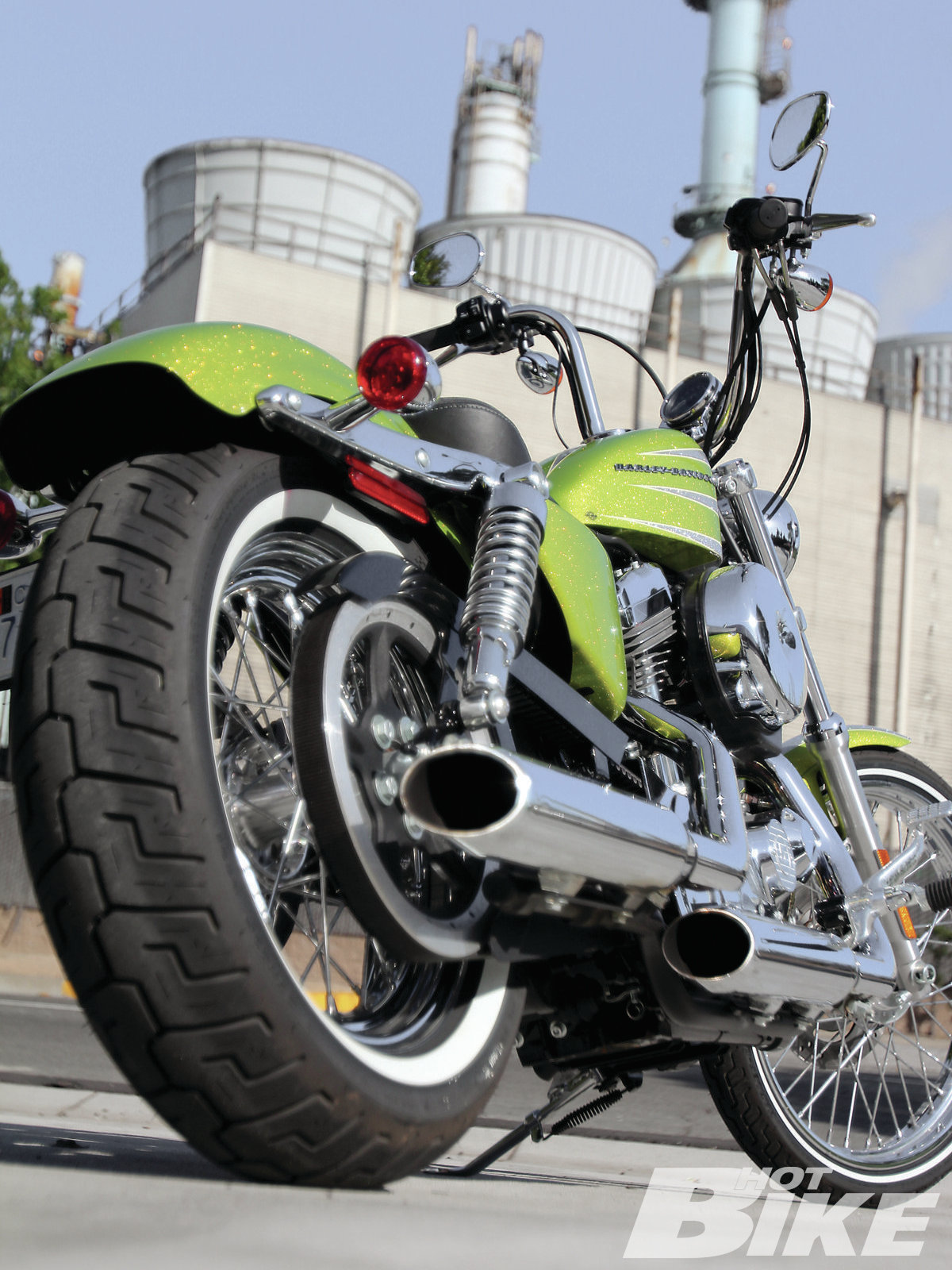 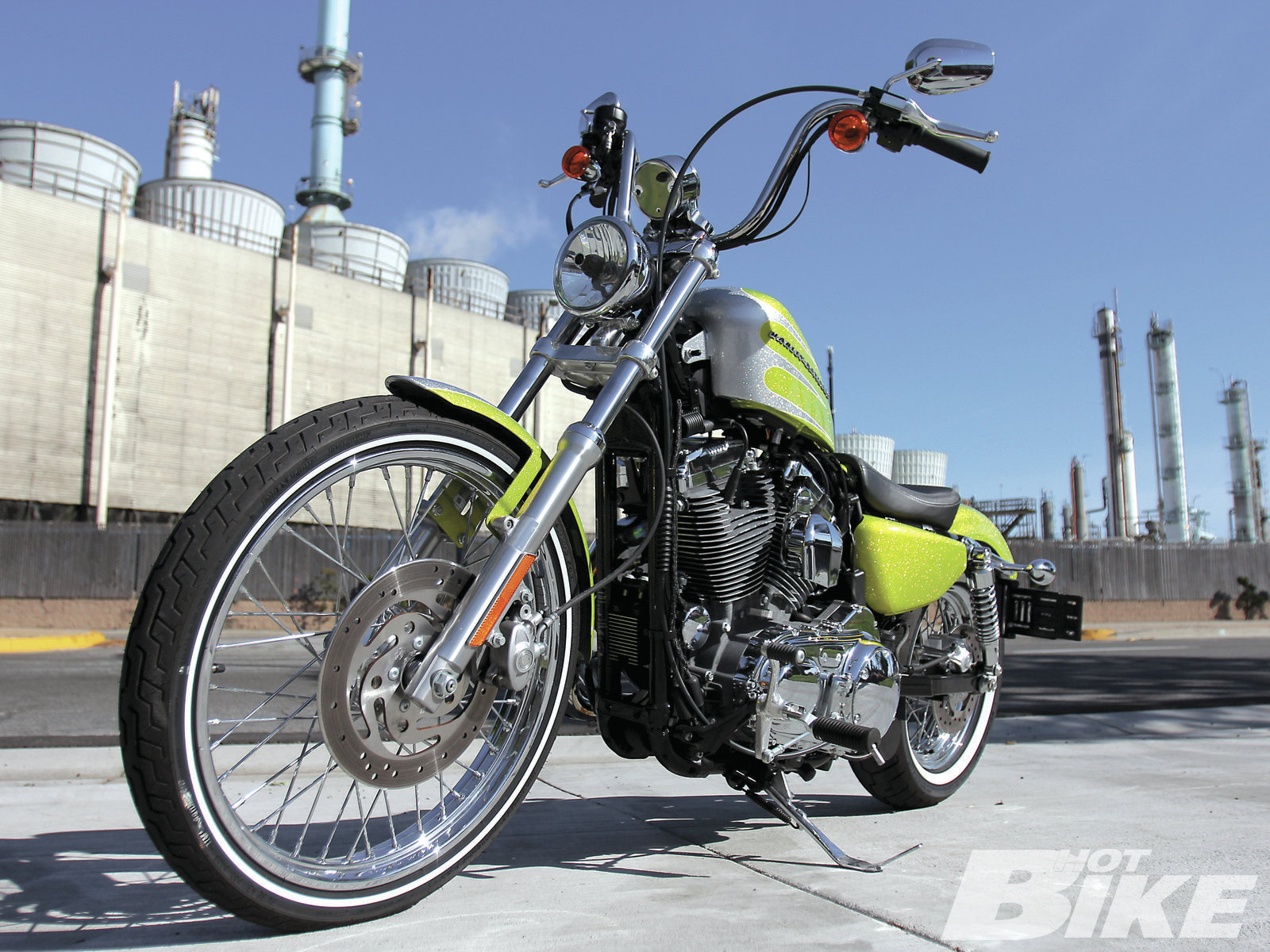 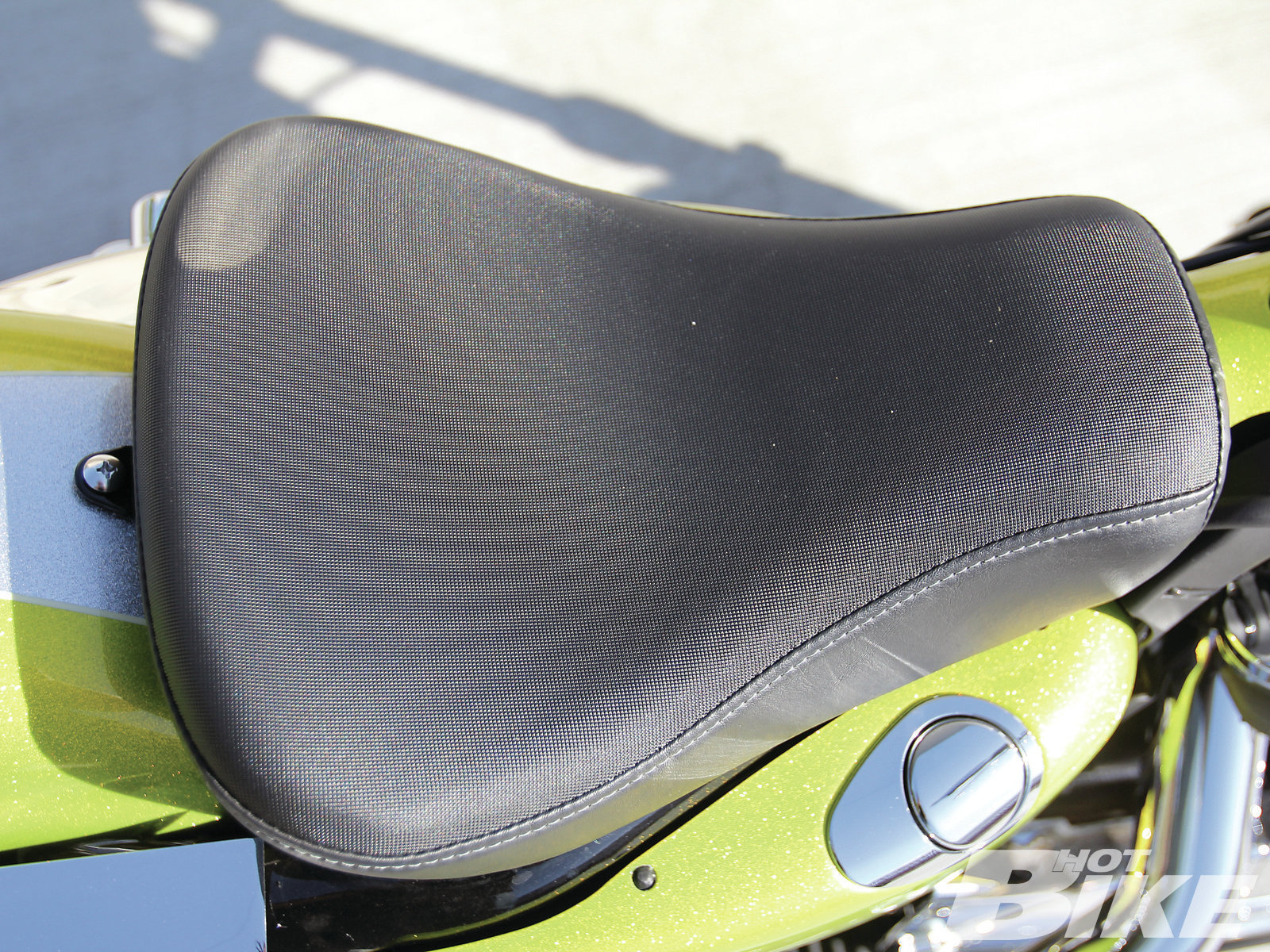 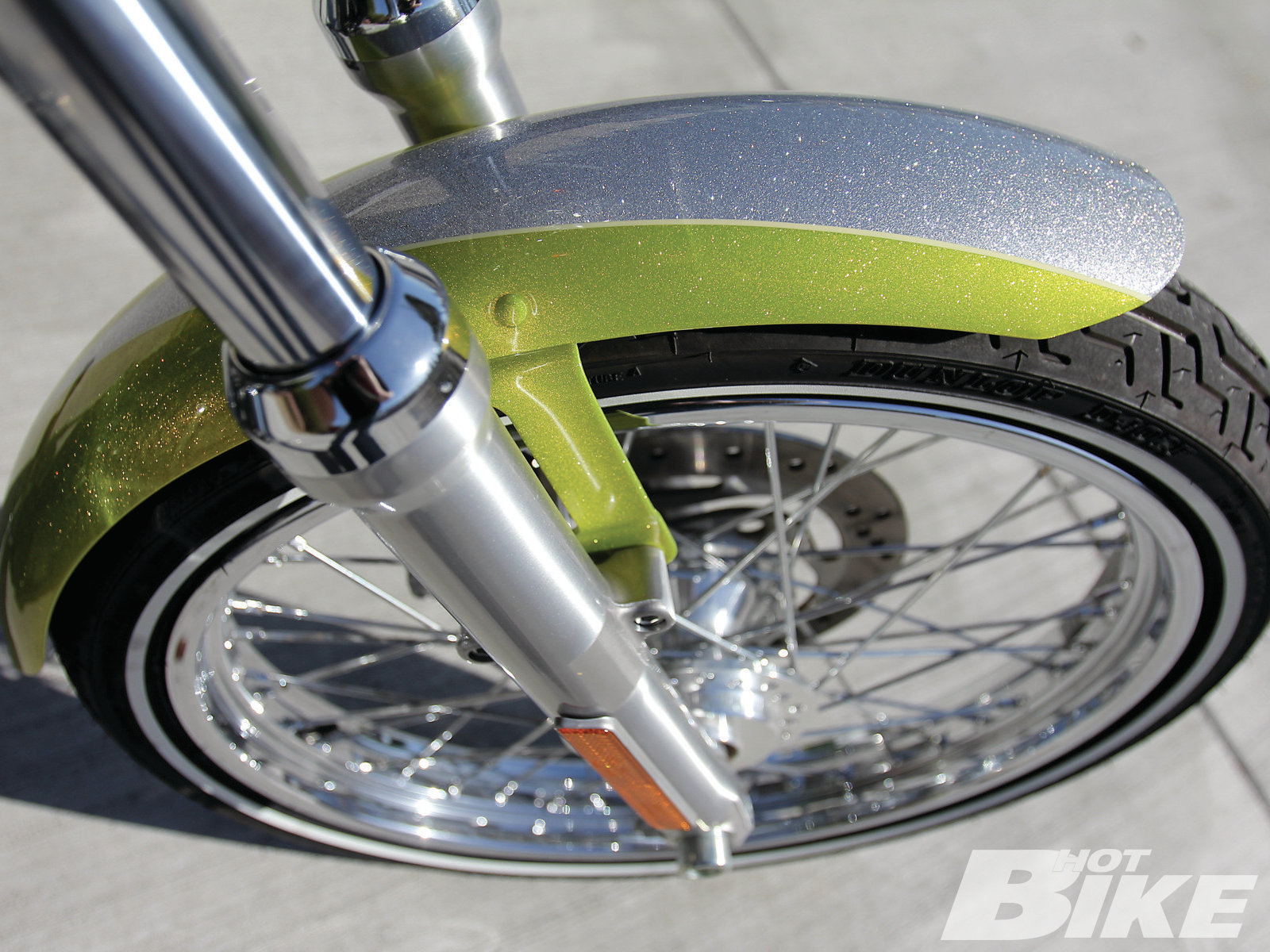 Removing unnecessary parts from factory Harleys in the ’40s and ’50s was done out of necessity. Riders needed to trim the fat for one reason: going faster. Any parts that didn’t contribute to a bike getting off the line quicker were stripped off and sent to the take-off parts bin for use at a later date. In the ’60s and ’70s, chopping bikes became the norm but it was done for achieving something more stylistically pleasing. As a result, guys realized how much cooler their bikes looked with a more exposed exoskeleton and a raked-out frontend. The simplicity behind that ideology sparked a revolution, and in a grander scheme, an entire culture.

Harley-Davidson seems to have its finger on the pulse of the fact that its younger demographic wants the less-is-more motorcycle, most notably with the Sportster lineup. Since Harley reinvigorated the quad-cam lineup with the debut of the Nightster in 2007 its success led to the release of similarly styled bikes as a result (Iron 883, Forty-Eight). Harley-Davidson’s latest iteration, the Seventy-Two, is the newest offering in the stripped-down Sportster category.

The Sporty is named after iconic Route 72 in East Los Angeles, a popular cruising hot spot during the ’70s where gearheads gathered next to their raked-out choppers positioned in a neatly parked row along Whittier Boulevard.

“In creating the Seventy-Two, we were also inspired by the vibe of the early chopper era, Those bikes were colorful and chromed, but also narrow and stripped down to the essentials.”

“In creating the Seventy-Two, we were also inspired by the vibe of the early chopper era,” says Frank Savage, Harley-Davidson Manager of Industrial Design. “Those bikes were colorful and chromed, but also narrow and stripped down to the essentials. You look at period examples and they are almost as simple as a bicycle. It’s a custom style that’s very particular to America and that California scene.”

Being fans of Sportsters in general—their nimble nature and handling characteristics coupled with the lightweight and peppy 1,200cc motor—HOT BIKE always looks forward to road-test time when a new model is released. The Seventy-Two is a tribute to the choppers from the past: drenched in chrome with whitewall tires, a tall ape-hanger handlebar, and an optional eye-popping metalflake paint scheme (shown here).

From the front of the 21-inch Dunlop whitewall tire and 12-inch-tall bar setup (10-inch bars with 2-inch risers) to the very minimal bobbed rear fender and the side-mount license plate, the Seventy-Two’s stance is reminiscent to the old choppers from yesteryear. Chrome and metalflake were pretty much the norm back then so of course, chrome is featured throughout the chassis and powertrain (pipes, round air cleaner, frontend, gauge mount, rear shocks, fender strut covers, primary cover, horn cover, forward controls, and turn signals). Paint options vary from Black Denim, Big Blue Pearl, or our favorite, Hard Candy Big Red Flake (add $700 to the base price). We asked Harley to deliver our Seventy-Two with its new Core Series – Hard Candy Custom Flake Lime/Silver paint scheme (pictured), which is available through your dealership. Other color combinations are also available, and the Core Series paint scheme is also available for other models.

“Seat-of-the-pants power is definitely noticeable in the lower rpm range but stays pretty consistent throughout the top end.”

Every motorcycle serves a purpose (some serve more than one) and it’s obvious that the Seventy-Two isn’t meant for touring long distances. The small, one-piece Sportster solo saddle with black textured vinyl cover isn’t the most comfortable; however, since the 2.1-gallon peanut tank yields approximately 75 miles per tank, it really doesn’t have to be since gas stops are more frequent. Harley claims a 48-mpg range, but after more than a enough fill-ups, we averaged about 70 miles per tank (10 of those with the fuel indicator on). The rubber-mounted 1,200cc Evolution V-twin mill boasts a torque output of 73 lb-ft at 3,500 rpm. Seat-of-the-pants power is definitely noticeable in the lower rpm range but stays pretty consistent throughout the top end. Expelling the fumes from the power plant are dual chrome, staggered shorty exhaust pipes with slash-cut mufflers. Simple is a good thing, and the pipes embody this adjective well. After all, Harley is billing this bike as a chopper.

The Seventy-Two features a pretty low stance, but the footpegs don’t touch down as easily as on other Sportsters we’ve tested. The 26.6-inch seat height isn’t the lowest Harley has released and cornering clearances aren’t as restricted. Ground clearance is at 4.7 inches with a left lean angle of 28.6 degrees and right lean angle of 29.8 degrees. Suspension travel up front is a claimed 5.69 inches; in the rear 2.12 inches. Overall, the bike rides pretty comfortably being that we’re used to riding ape-hanger-equipped choppers. The seat isn’t the best, but the ergonomics trifecta of the bar, seat, and forward control setup is pretty rider-friendly, especially for our 5-foot-10-inch frame.

The Seventy-Two should do well among the younger hipsters out there, as well as chopper aficionados looking for the bar-hopper-style bike. That is until the Motor Company releases another hotter Sportster that the folks out there can really sink their teeth into. HB

Number of hours in three days

The Rule of 72 (in financial terms it calculates how long to double your money/debt based on a given fixed interest rate, assuming interest is compounded)

1. The Rocker-C with stock exhaust system. 2. The Bassani Road Rage 2-into-1 system is known for its low-end torque […]

Slices of toast on a plate. Manki Kim/Unsplash No matter how big your kitchen is, counter space is always at […]