From Street Bike to Street Glide

While coming back from Myrtle Beach, North Carolina, Bill Luciano was passed by a red Road Glide with at least a 26-inch big-spoke wheel up front floating over white LEDs. He found this look to be on another level, since he was tripling the speed limit on his crotch rocket and needed to slow things down. It was around this stage of life that he was ready to focus on doing the right things, as his career in the military was coming to an end.

Bill hit the internet looking at styles, options, and other ideas to complete the Street Glide to which he quickly grew fond of the 26-inch over the 30-inch wheels. When he discovered the Glenndyne G2 5 spoke wheel, he knew it was time to start saving money to fund the project.

Bill found a 2008 Street Glide painted stock Black Pearl with less than 5,000 miles on it. At this point Bill had one more year before leaving the military. The bike ended up being the one constant he needed as he separated active duty, moved, and started a new career, turning a dream into a reality amongst the chaos. Karma! 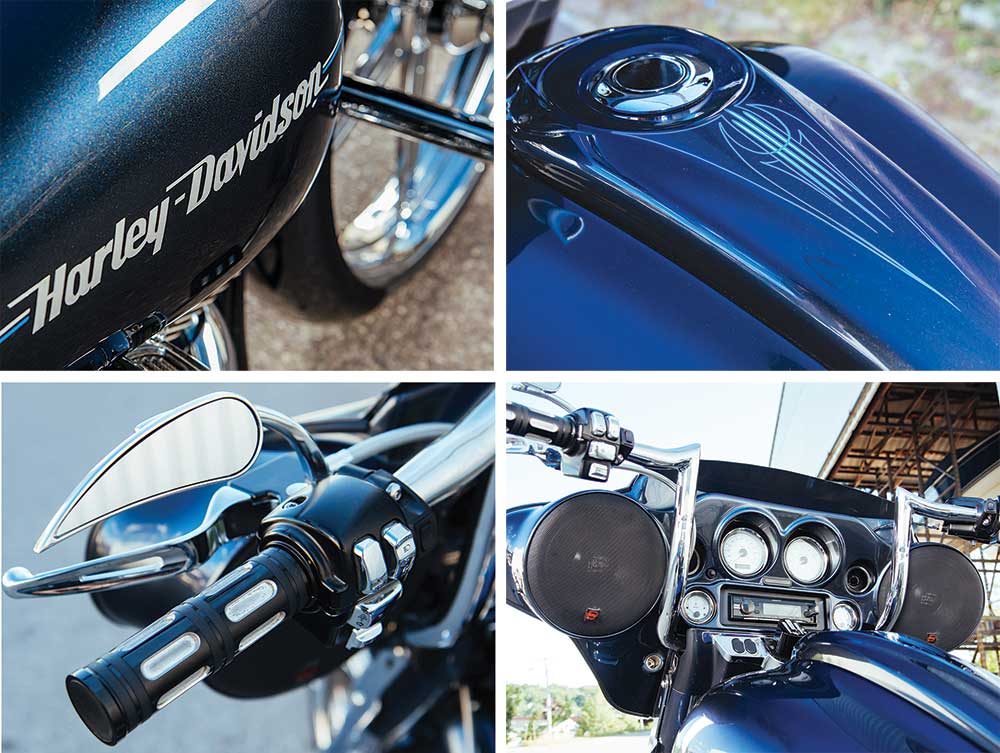 A lot of thought and attention to detail was being planned into the build from the classic five-spoke wheel up front, down to the planned paint scheme.

It wasn’t long before the mods would come along and he’d reach out to Crazy Beavers Customs to have the neck prepped for the new wheel using an American Suspension short weld kit. Once the dust settled, he reached out to Low Life Industries and Justin at Infocus Mobile Audio (IMA) due to their high-end audio installations and part of the FKM line. With winter on the horizon, Justin picked up the bike to take back to Windham, New Hampshire. The only parts Bill had to provide were the matching rotor and caliper, as it still had the dual rotors and would be changed to a single-side 13, so the rest was on IMA.

Angled bags were added to allow better cornering. The audio system was optimized to work off the stock charging system and one battery with no amplifiers taking up space in the bags. 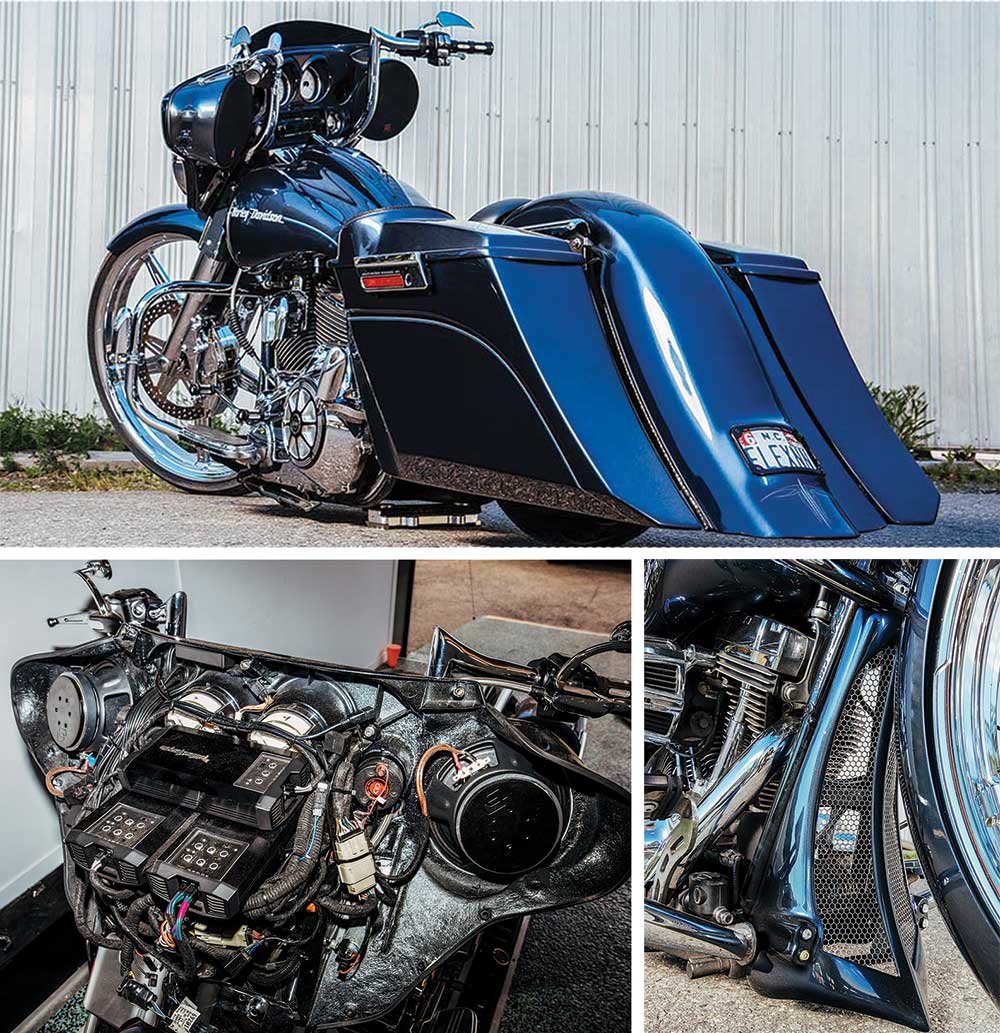 It’s not exactly Bill’s old crotch rocket by any means.

IMA then set to dissembling the bike and started to provide a raked FKM outer fairing and inner fairing holding DD VO-CCX8s with a one off windshield complementing the 13-inch Prime Apes bars from LA Choppers with American Suspension triple trees. Under the fairing IMA installed a custom-fabricated rack to hold two RF four-channel and one RF monoblock amplifiers. A RWD front fender was placed over the 26, accommodating the matching rotor with an oversize six-piston caliper Bill had, and IMA shaved the unused mount for a cleaner look. A Camtech tank shroud with a molded recessed dash was used matching the rider’s seat, backrest, and suction cup seat upholstered to match by VonStitch.

IMA then molded FKM side covers to the bags and placed DD Redline 8-inch subs in the lids. Next, the bike was bagged using an FKM-designed aluminum foot instead of the typical motorized centerstand, as the bike sat too low while aired out, allowing a 1-inch clearance from the ground. Titanium rails were added so it will shoot sparks while dragging if so desired. The motor had just the cam, intake, and exhaust upgraded at this time.

The bike was then ready for paint and was supposed to have Black Pearl with just a little blue in the clear coat. However, while mixing up the sample a little too much blue was added and they all fell in love with the resulting color. At this point Jeff Gates put the paint on while Ronnie Hatem pinstriped, complementing the classy style of the bike down to the motor’s contrast-cut parts. The Harley-Davidson badging was painted on the tank, making it clear what this custom was.

The bike now has nearly 4,000 more miles on it, and Bill is loving every bit of it, as he is now cruising the asphalt on a classic, timeless-looking Harley with new-school ride quality, styling, and big audio.

With the bike ready seven months later, it debuted at Laconia Bike Week where Bill picked it up in person after hitchhiking with Low Life Industries to get there.

Bill was in shock when he saw the bike in person and sat on it for 20 minutes before he was willing to ride it. He had to get used to the big wheel and air ride but that didn’t take long.

The first in a four-part series on converting to chain drive. Words and Photos: John Zamora If your riding primarily […]

West Bend, WI, November 14, 2011: Discount Ramps.com announces the release of the hottest, most versatile loading ramp in the […]

The word “voodoo” usually conjures up images of sacrificial poultry and tiny dolls with needles sticking in them, not chopped […]