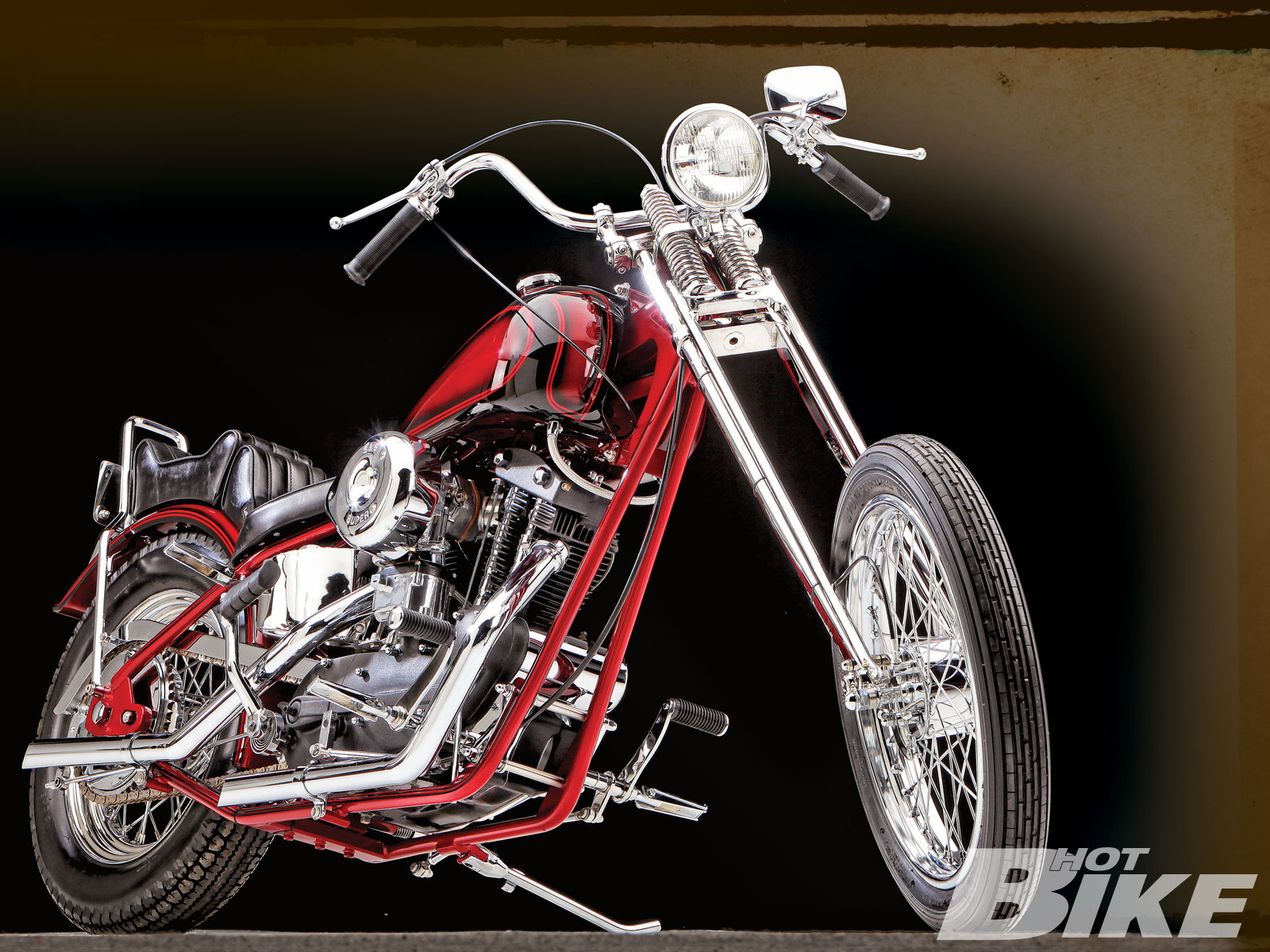 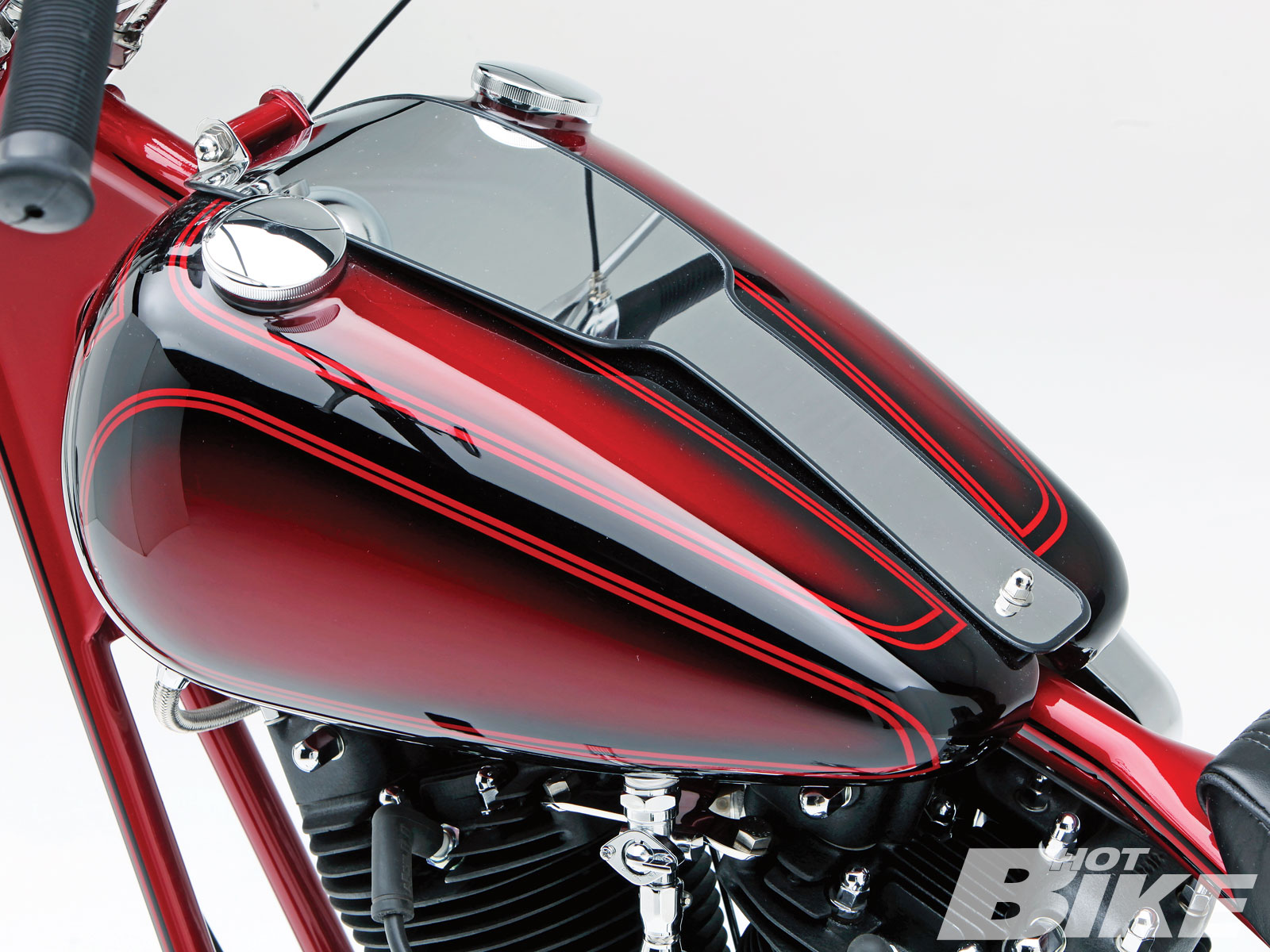 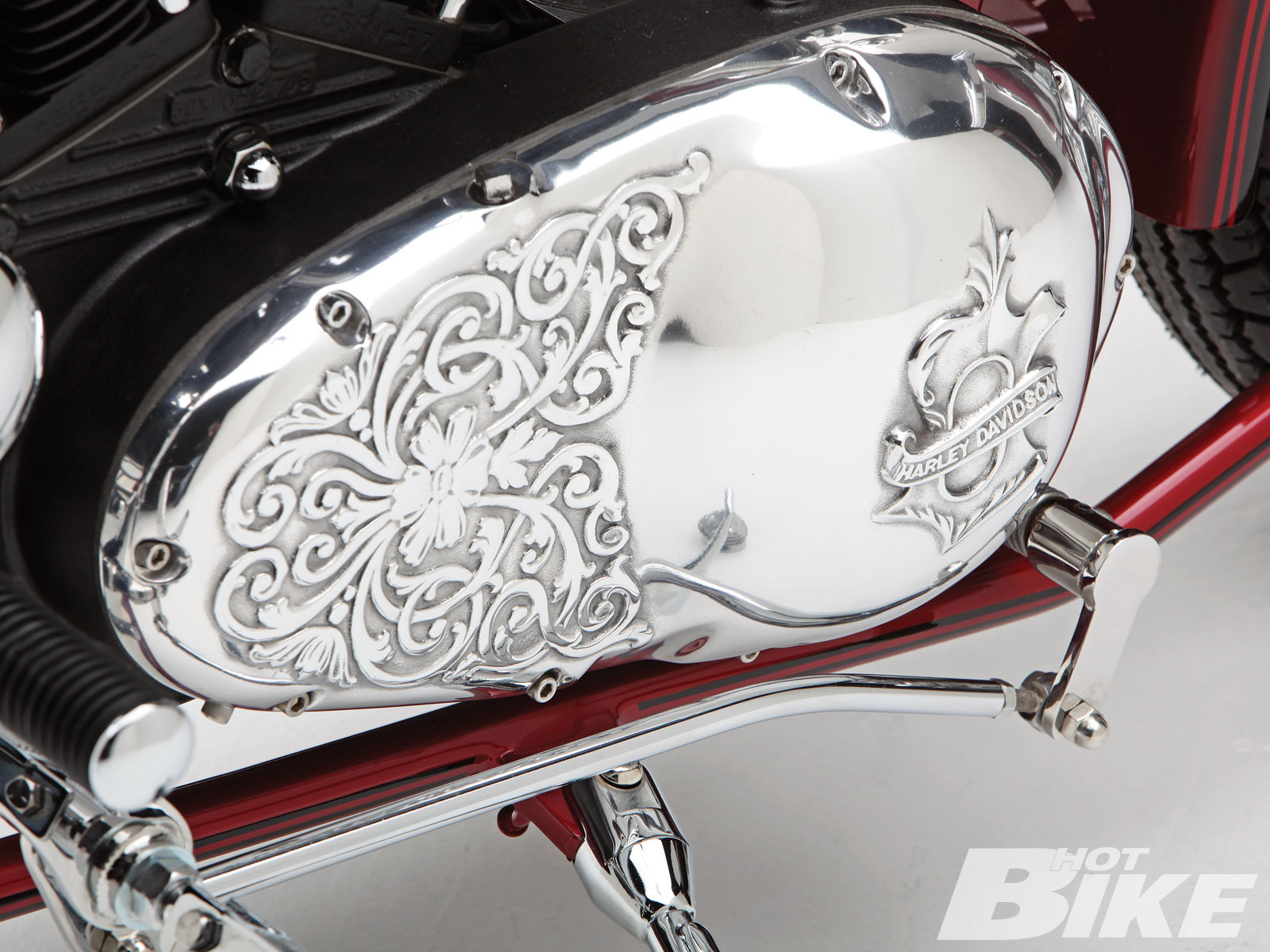 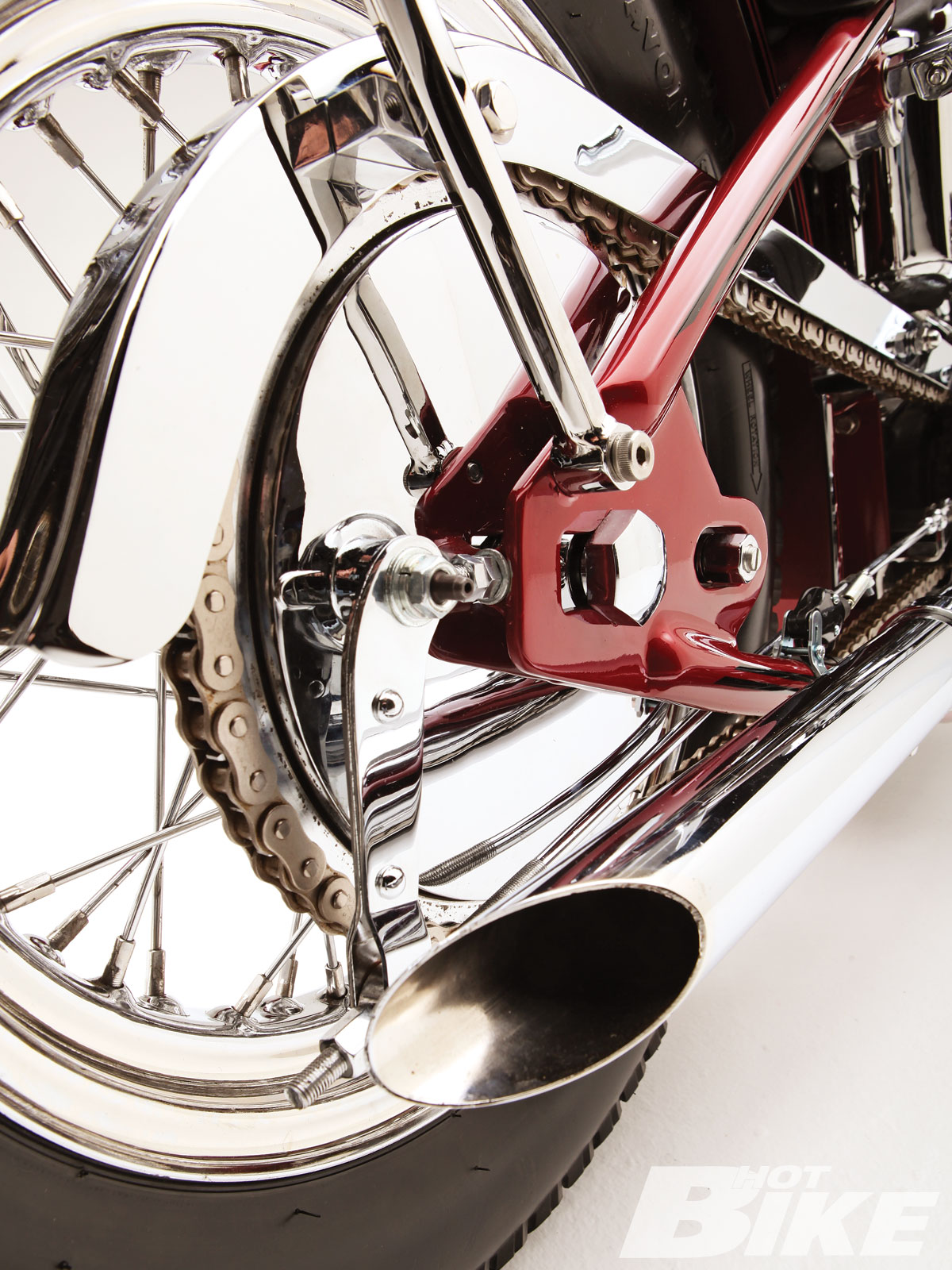 “Over time the bike was restored nearly exactly to the way I had always remembered it.” 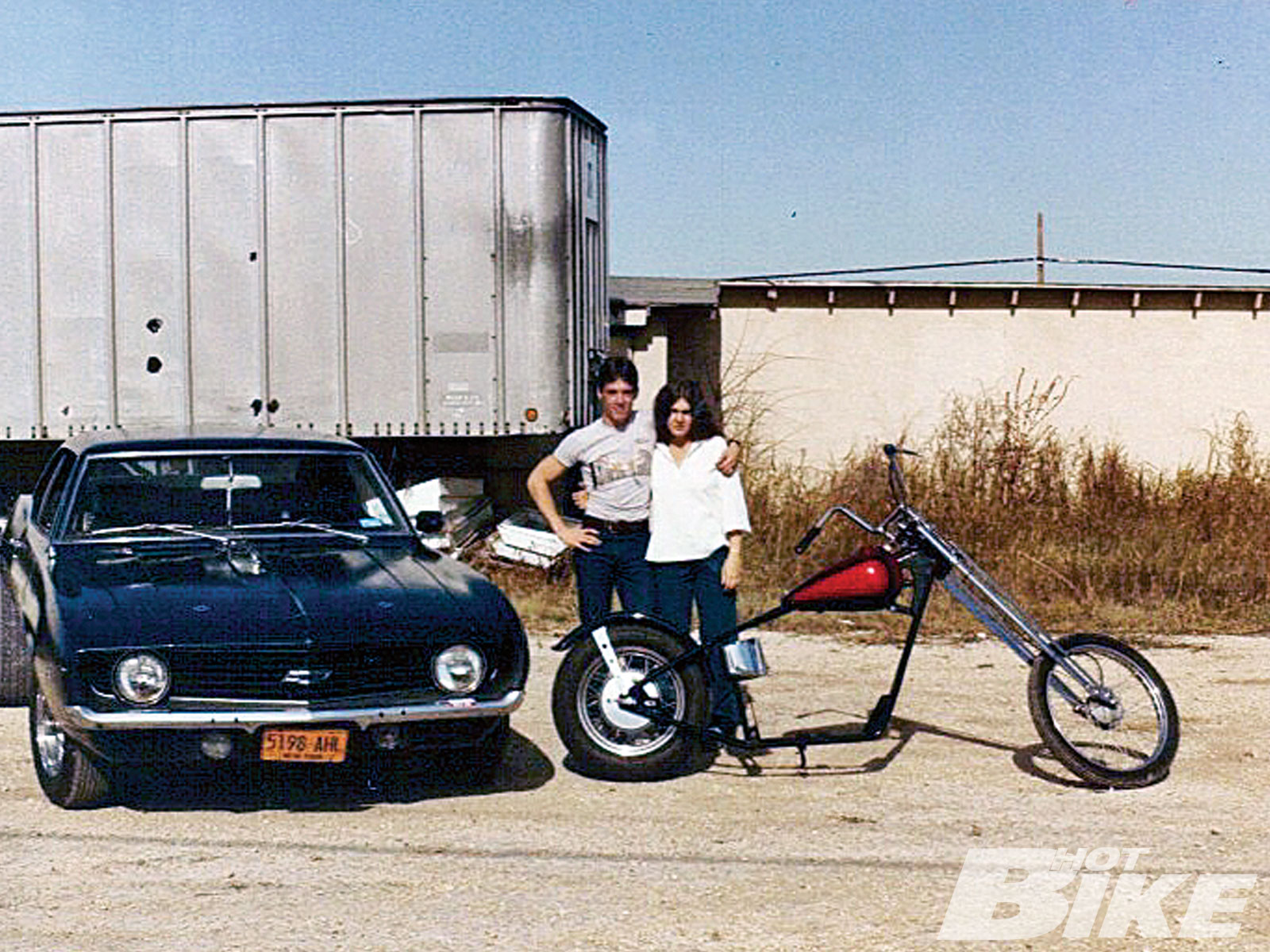 This was the rolling chassis that Bob found for sale in Northtown Cycles for $900. 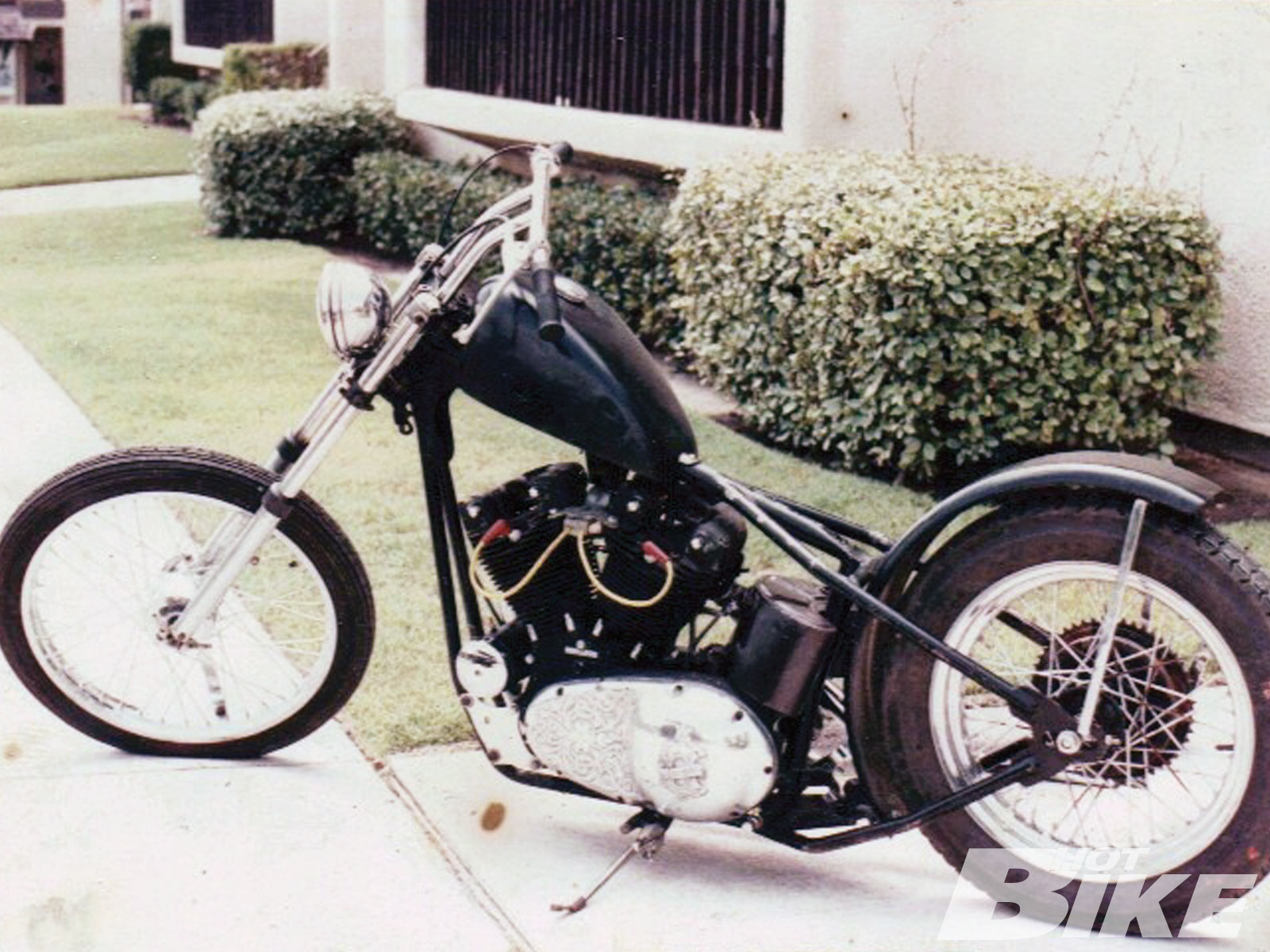 This is the ’59 project Sporty project that Bob found in the San Antonio newspaper for $1,000. 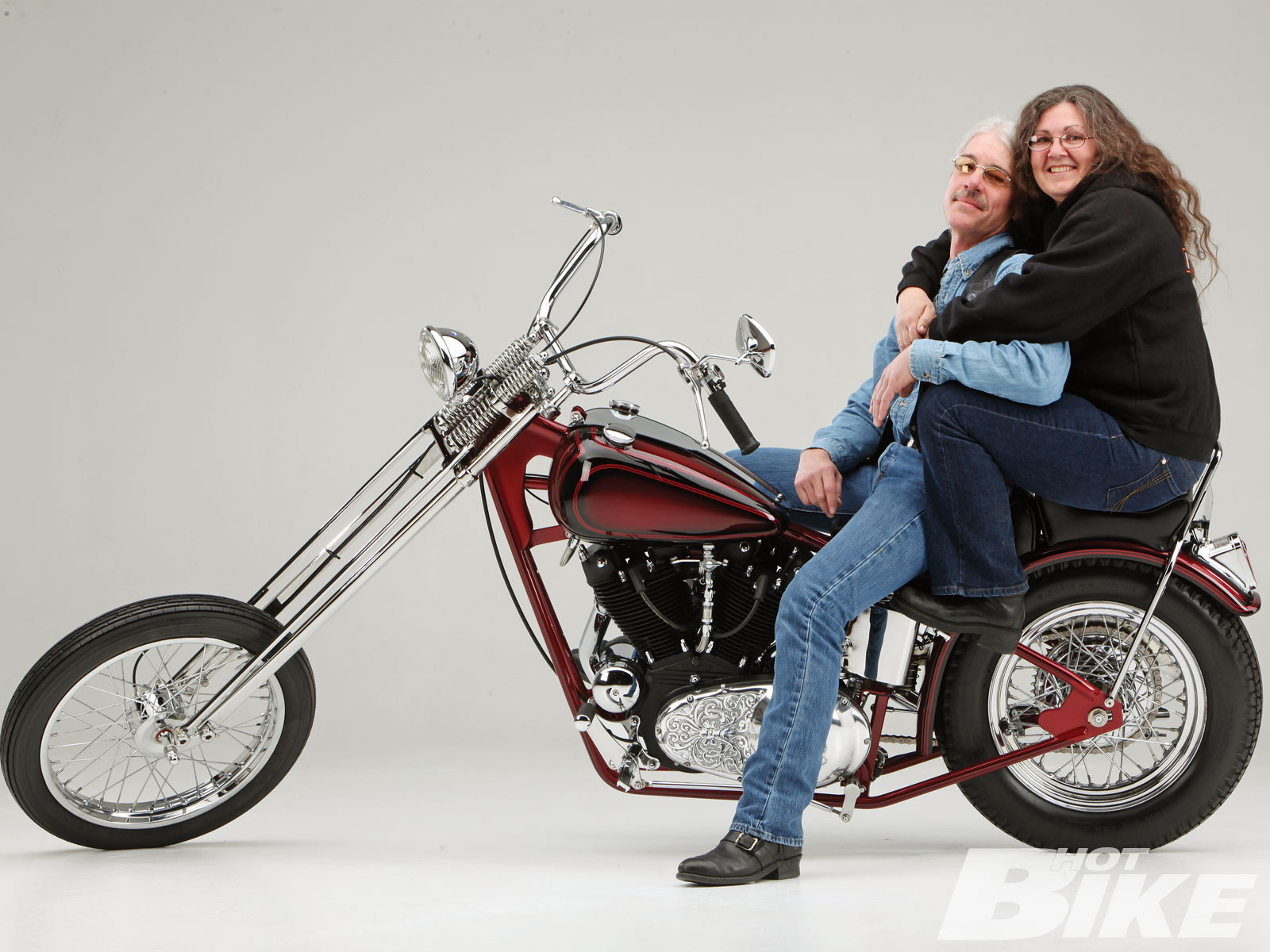 Just like mom and dad used to run the streets back in the day.

This is how the 59′ drivetrain and rolling chassis looked once they were combined. Jake looks pleased with his future ride.

In the group photo above (far right kneeling down) is Ray Jr. He and his father have been long time friends of the Smith family. Ray Sr. was a big custom motorcycle enthusiast as well, particularly the speed aspect as evidenced by the inset cover shot of him from the July 1984 issue of HOT BIKE. Since Ray Sr.’s passing, Bob has taken Ray Jr. under his wing showing him the ropes as he knows Ray Sr. would have done. They are currently working on Ray Jr.’s bike, a basket case Sporty.

My father (Bob Smith) started building this bike at the same time my mom was still pregnant with me. The bike was built in memory of his father, an avid motorcyclist, and was promised to me before I was born. While stationed at San Antonio’s Kelly AFB in 1982, my dad saw an ad in the local auto trader for a ’60 basket case Sportster engine for $400. He bought it and went to Northtown Cycles to get the engine heli-arc repaired and glass-beaded. In the shop, the owner had a Sportster rolling chassis for sale and wanted $900 for it. After a lengthy discussion, my dad was able to convince my mom it was a good deal and got the money for the roller on top of the money he already owed the guy for the machine shop services.

Later that next year, there was another ad in the paper for a ’59 Sporty project with a freshly rebuilt engine. My dad was already on thin ice for the $1,500 he’d spent and was pushing his luck convincing my mom to get a loan for the $1,000 asking price of the ’59 project Sporty. My dad wanted it badly because he was born in 1959. He told my mom he could pull the ’59 engine and put it in the rolling chassis he bought from Northtown Cycles and then turn around and sell the other engine and frame to recoup some of the loan money. My mom agreed and the purchase was made and my dad found a buyer for the other engine and frame, and was feeling pretty good about only being out about $1,500 on the entire deal.

A little while later, my dad met a guy named John Haga, owner of a little shop called John’s. John took a liking to my dad and his ’59 Sporty project, and offered my dad the use of his shop to complete the build. John and my dad rode side by side for a couple years, winning a few bike shows along the way. In 1985 my dad left the military and returned to his hometown in New York to raise me around family. He rode the chopper for four more years in New York, occasionally putting it in the Syracuse Super Swap show. In 1991 my dad took the bike apart and put it up in the attic to save for me.

I returned home from a five-year stint with the Marine Corps and late in 2007 my dad got the chopper down from the attic as a winter project. He spoke of Hillside Cycles, Browns Plating, and Sumax as the best in performance and show bikes. Parts left the garage, my mom and dad worked a lot, and slowly it all started coming back to the garage for assembly. My dad was always open to my friends wanting to learn about building bikes and helping out, and he would always say, “You guys remember, what you learn, you pass on.” Over time the bike was restored nearly exactly to the way I had always remembered it. I received the title on the Christmas tree in December of 2009. The bike has a nickname, Rooster, and it’s a cherished heirloom. By the way, don’t worry about my dad, in 2008 I bought him a ’59 FLH that he’s been wanting for nearly two decades, but that’s another story.

5 Cool Saddles For Your Bagger

Whether you’re a lone wolf or choose to travel with a partner in crime, there’s a perfect seat out there […]

Recipients of 2015’s scholarships: Sidney May and Arianna Nelson. Courtesy of The Buffalo Chip The Sturgis Buffalo Chip has kicked […]

2007 Thunder Chopper – Spring Back In Time