This 1996 Harley-Davidson Softail custom from Hell Bent Custom Cycles takes coloring with crayons inside the lines into a whole new dimension. Builder Jere Booher is the guy who created the Sharpiee bike, so I’m not all that surprised; Brad H Designs, which does all of Jere’s high-end graphic work, killed it with both machines, and part of me really wants to see what Brad would do with finger paint.

“We made that Sharpiee bike a few years back,” Jere says, “This is the same principle but done in Crayola paraffin pencil. Lots of time went into it with messing up, redoing it, over and over to get it right. I’m glad it wasn’t a bagger or we’d still be working on it. I mean, if you’re going to elevate art supplies from Staples like this, you might as well explore the whole palette, right?”

Built for Lethal Threat, from what was once a stock Fat Boy, this Softail packs a stance best described as pissed off. Given the graphic work put into it, you might call it the world’s angriest coloring book, in a sense. Between the flat black and gray, short fenders, and no-BS attitude it oozes, the motorcycle is a very badass machine. “I’ve had a bunch of bikes in magazines,” Jere continues, “but this one looked cool just sitting there.” The bike’s also a touch tricky. That front wheel sneaks up on you; it’s obviously larger than stock but it’s a 23-incher, not a 21-incher.

Hell Bent Customs changed over to right-side drive to keep the fat tire balanced rather than offsetting the final drive with spacers on the left-hand side.

Lacework on the leather solo saddle, not colored in with crayon. All the artistry comes together in pieces like the gas tank. Look at the hand-drawn work in the pistons and bones. It’s like a black-and-white horror comic in motorcycle form. Like Yoda said, “I sense much anger in him…” 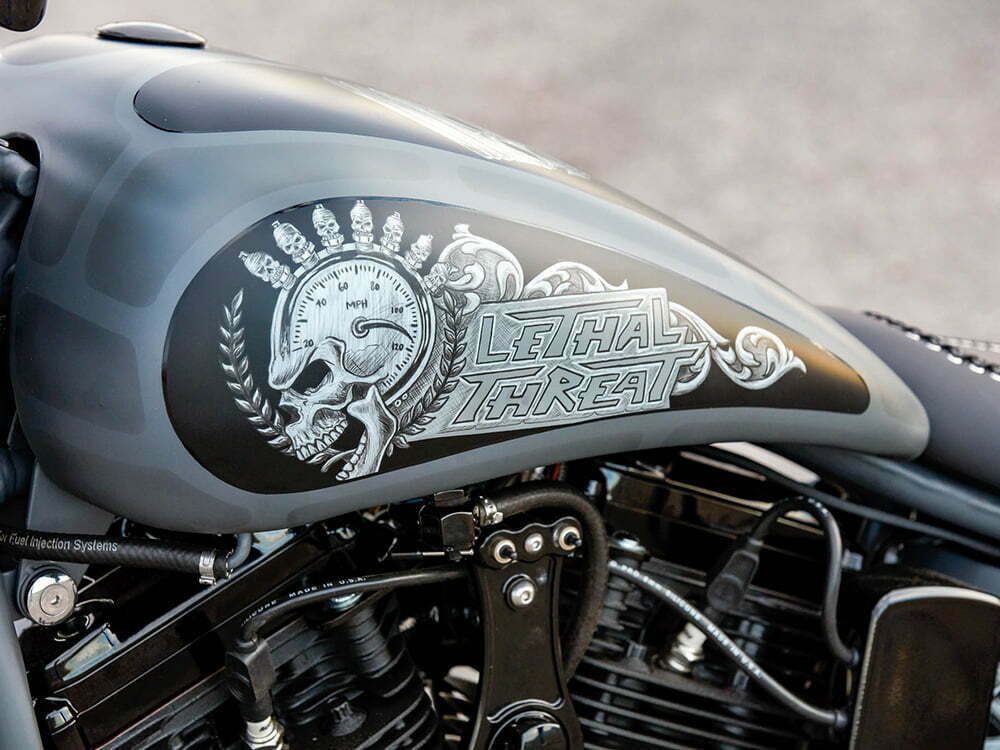 Great, now I want a speedo set in an actual skull of my own. Thanks, guys. Flat finishes on the open primary pull the look of the motor together on that side. There isn’t much of a rear fender but what fender there is looks awesome. The belt leaves no doubt as to whose bike this is.

“This was a really big win for us,” said Krawiec. “We showed the rest of the field that we have […]

Joker Machine on lockdown. Courtesy of Joker Machine Give your Harley-Davidson bagger a personalized look by replacing the saddlebag latch […]

Dress up the back of your Harley-Davidson® with a chrome radius license plate mount. Drag Specialties partnered with Don Hotop, […]