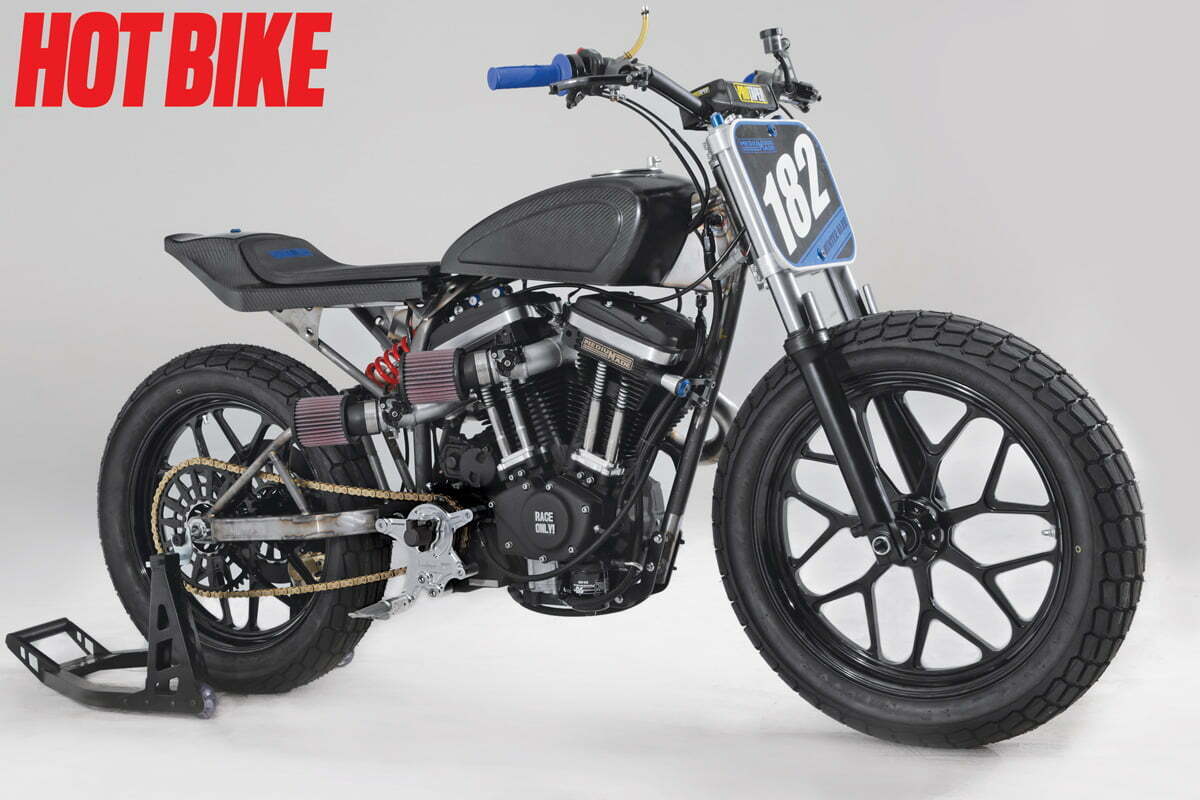 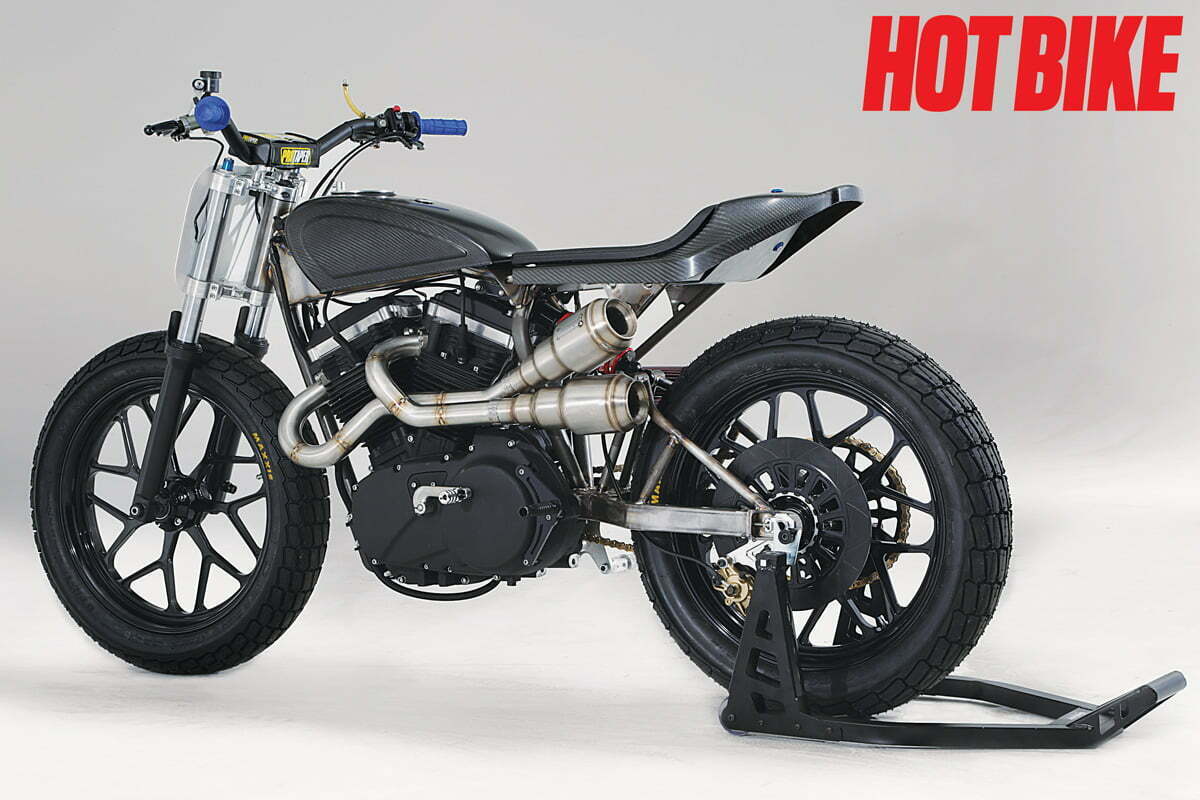 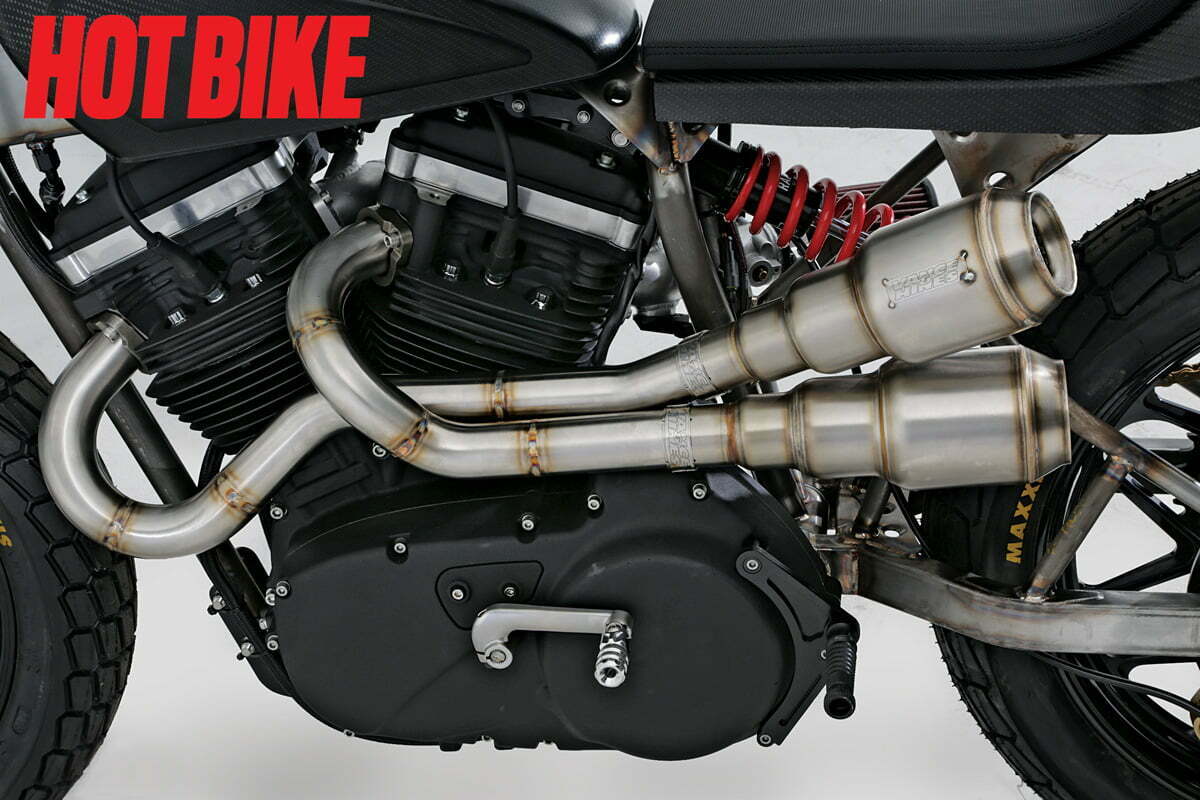 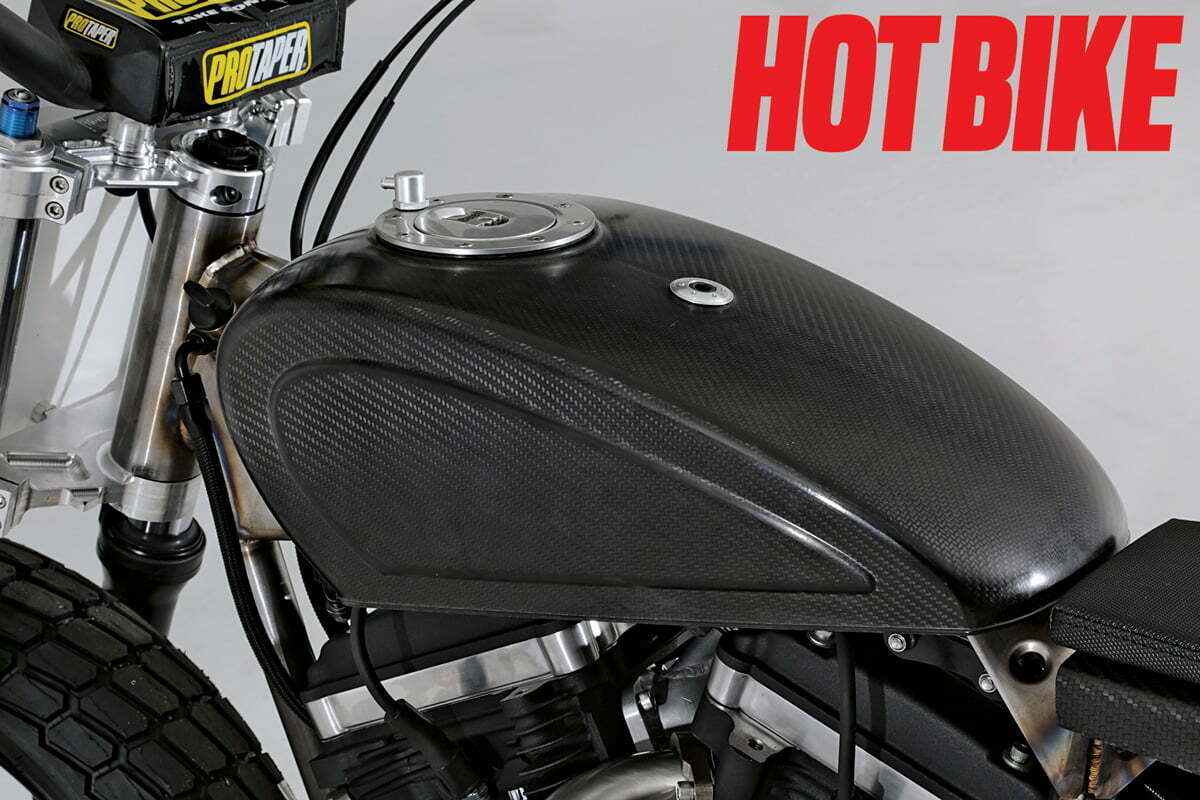 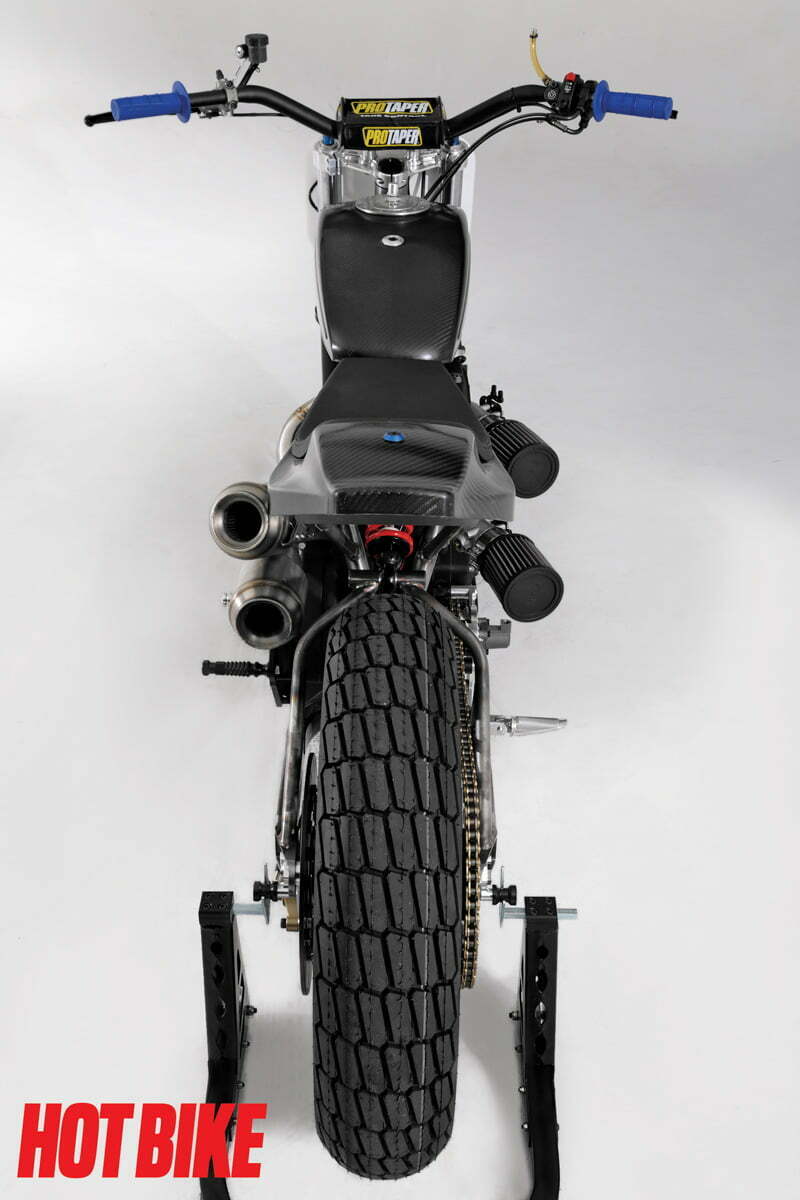 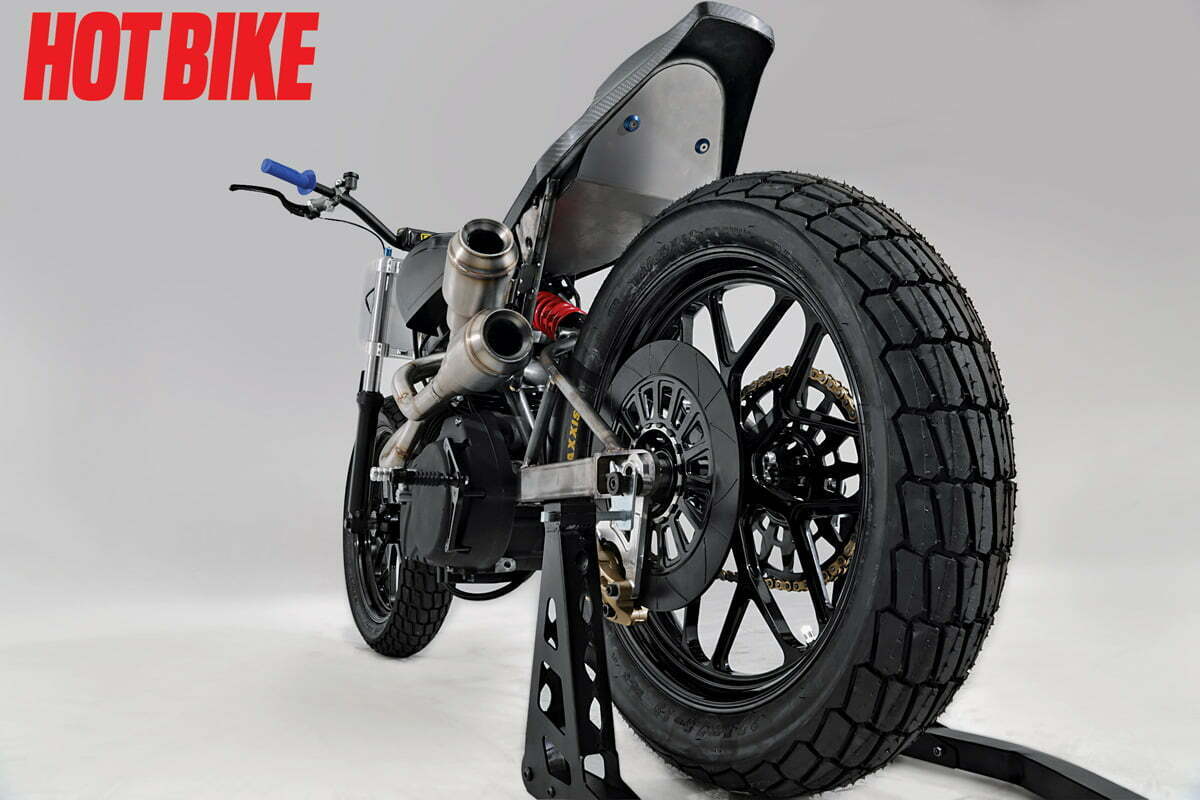 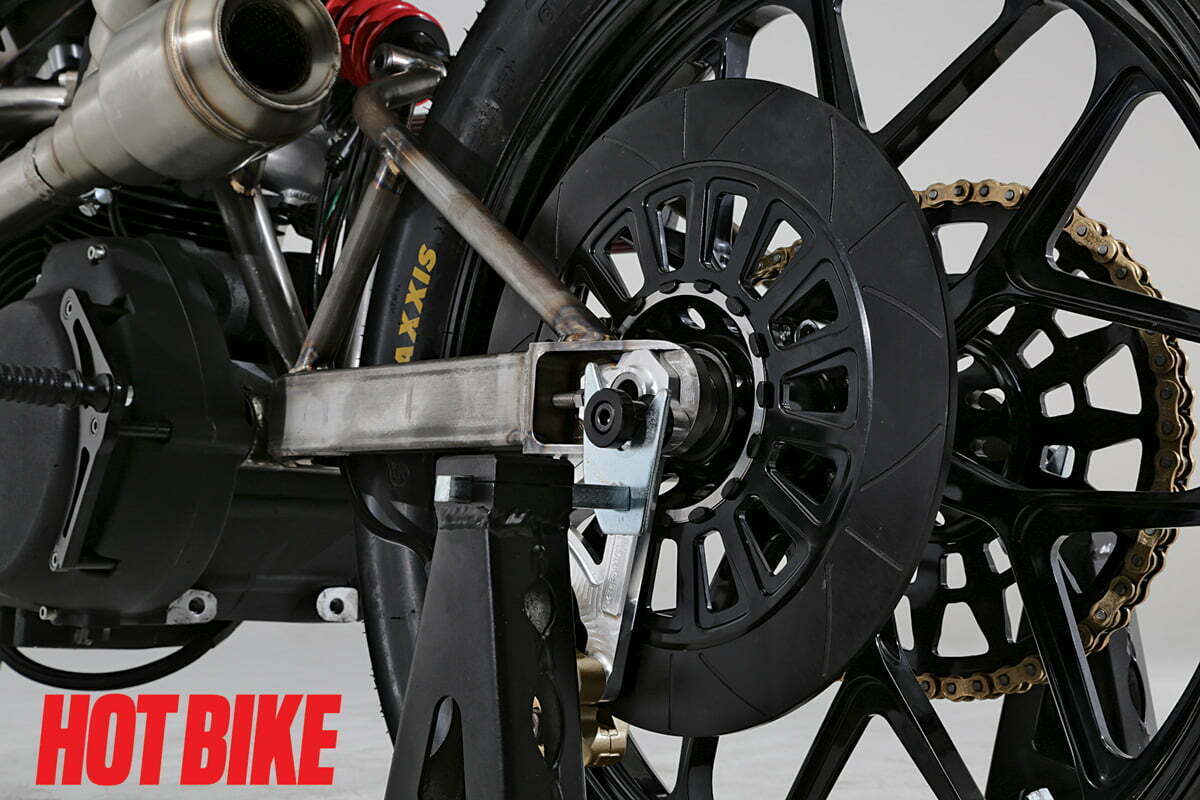 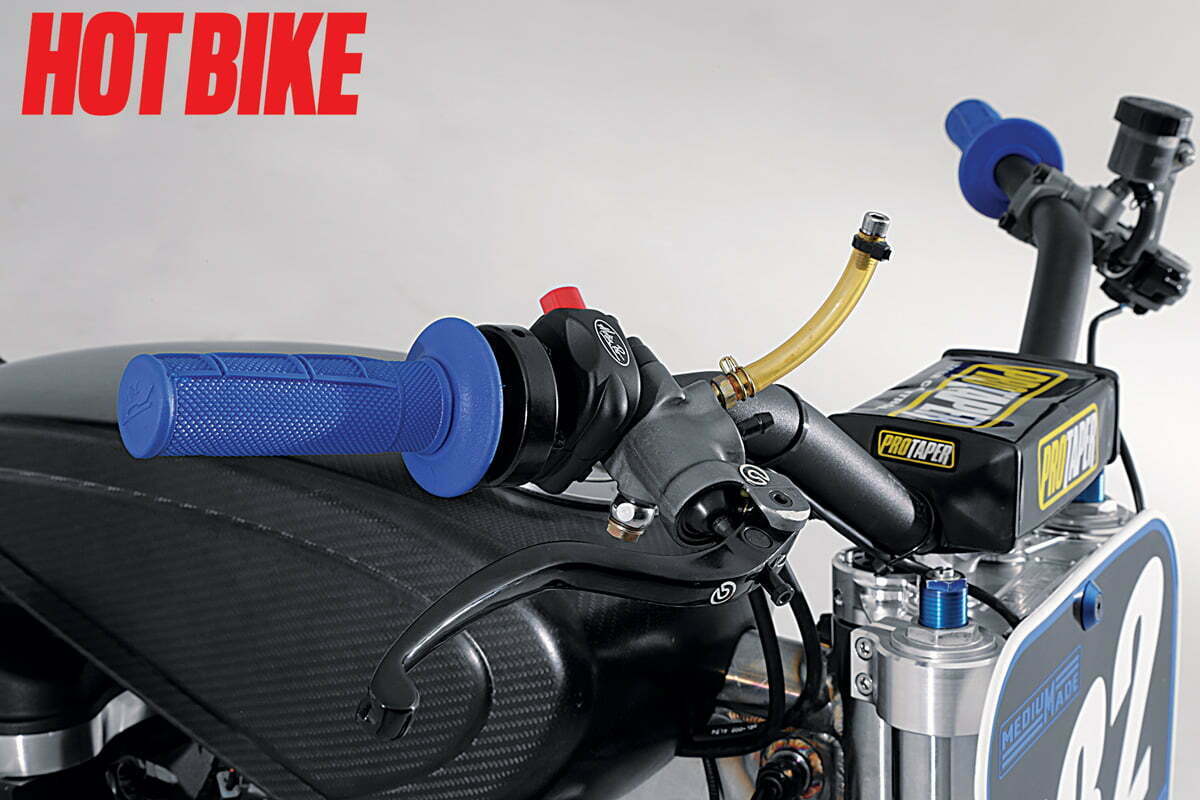 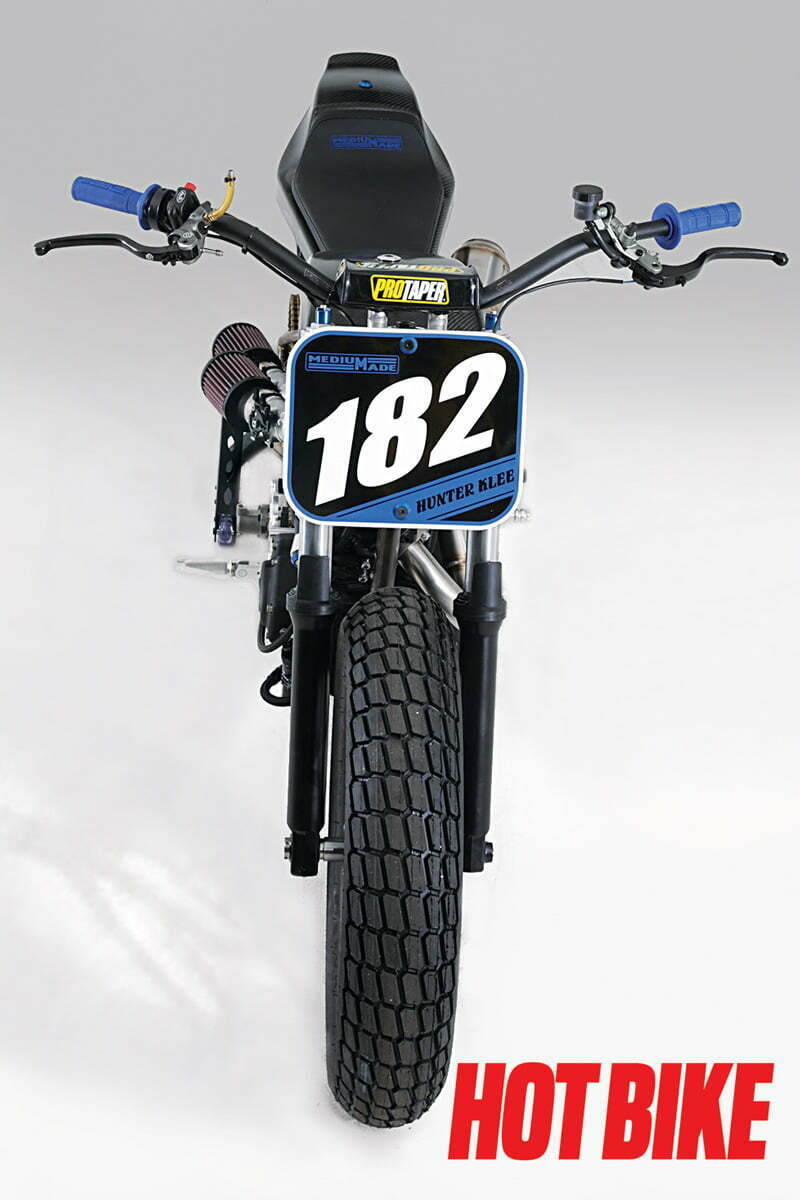 The story behind the bike is very simple: I wanted to build a flat-track racebike that could compete at the highest level of competition. All racebikes are show bikes, but show bikes are rarely racebikes.
I am lucky to work in the R&D department at one of the greatest companies in the world, Vance & Hines. The entire company supported me throughout this build, and there is no way I could ever say thank you enough. Tucker Rocky and Biker’s Choice stepped up big to support me with parts that most people wouldn’t even realize are needed for building a bike.

The carbon-fiber bodywork was probably the most difficult and time-consuming parts on the bike—from designing the parts in 3-D CAD, to machining the molds from pieces of aluminum that we could barely lift into the machine, and to polishing the molds to a perfect scratch-free finish. The most innovative parts on the bike are probably the pieces in the rear wheel and the fuel-injection system.
STD Development made me a set of one-off XR750-style heads that basically the entire bike is built around. For the fuel injection, Todd Canavan and I wanted to convert an older motor to the newer Delphi CAN bus ECU. This involved fitting the cases with a crank position sensor and installing a newer XR1200 crankshaft, as well as all of the other sensors that go along with that… Fuel and spark are now controlled by the Vance & Hines FP3, which has the ability to tweak every aspect of the ECU so I can get the bike running properly.
Paul Kittrell from Lyndall Brakes/Ride Shop had a concept of using his patented Lug Drive system for both the sprocket side and the brake side. That way we could quickly flip the wheel around at the track for a fresh side of tire and not have to worry about needing tools to do it. I did the design for the parts in 3-D CAD, and Paul and Marc Susman both made it happen in real life. Lyndall Brakes also took my rotor designs and ran them into reality with its CNC machines.
The folks at Orient Express got me set up with K-Tech. They built me a custom shock and hooked up my R6 forks with a piston kit, and the bike rolls like a dream no matter what the dirt or pavement is underneath it.

the bike rolls like a dream no matter what the dirt or pavement is underneath it.

Chopper Dave’s Casting Company made me some cool parts for this bike that most wouldn’t even know are there because everything blended in so well. He’s also the main reason that anybody would know who the hell I am. We built his turbo bike together, and he’s been my guide (for better or worse) ever since. He has always been there to help me.
In addition to the companies, there was a group of people who came together to help me with this build. Whether you are capable of doing the work or not, it’s impossible to do everything on your own with compressed timelines. Anyone who says they did it all on their own either took a long time to do it or is completely full of shit.

Anyone who says they did it all on their own either took a long time to do it or is completely full of shit.

There are so many people to thank that it’s hard to know where the list starts and stops. Lacee, Ryder, and MacKenzie. My wife and kids are at the top of the list for sure since all three were basically abandoned for weeks on end while this build was taking place. Love you guys!

Editor’s note: Due to the timing of the release of Harley’s new models and our print schedule, in this issue […]

John Siroonian’s Custom Isn’t A Bad Boy, But Boy, Is It Bad!

Not bad for John Siroonian’s first custom Harley effort. Kirk Willis This article was originally published in the Spring 1996 […]

Stock Here at HOT BIKE, we get a lot of rides-Harleys, hogs, whatever you want to call them-submitted by our […]