John Shope and Charmin both know how to make a Dirtytail look clean. Shope’s version looks a lot cooler, smells better, and leaves its skid marks on pavement where they belong. All toilet paper humor aside, the three-time Tour champion’s entry for the 2018 GEICO Hot Bike Tour is a damn bitchin’ ride that’s a pretty far cry from the 2015 Harley-Davidson Softail it was born as in the factory.

The idea behind it was to improve the looks and ride of a Softail. Much of the credit for the ride upgrade goes to Dirty Bird Concepts’ in-house Dirtytail suspension conversion, with its custom swingarm and shocks. John’s shop matched the back suspension with its own inverted fork mated to Hawg Halters triple trees. Both ends roll on Ride Wright wheels bristling with spokes. And now we know where the name Dirty Bird came from…

Sideshow’s Cycles constructed the 103-inch Harley-Davidson V-twin that resides inside the frame. It’s a beauty to look at that sports John’s own El Jefe fishtails and a Performance Machine airbox.

All of this forms the foundation for John Shope’s Tour contender but it’s a far cry from a finished machine. You also need little things like gas tanks, handlebars, and seats unless you really want to up the difficulty factor in riding a motorcycle. He tossed the stock fenders and swapped in his own which were cleaner and more in line with his plan. The old handlebar found itself in the discard pile too, replaced with a set of apes from Khrome Werks. After mock-up, LiquidLuvStudio and Metro Plating took over, laying down red with silver flake paint and sweet, shiny chrome, respectively.

Once the seat from Guys Upholstery was in place, John’s Dirtytail was Tour-ready and off to see and be seen. Which it was, winning John Shope his fourth Tour ring in the process. 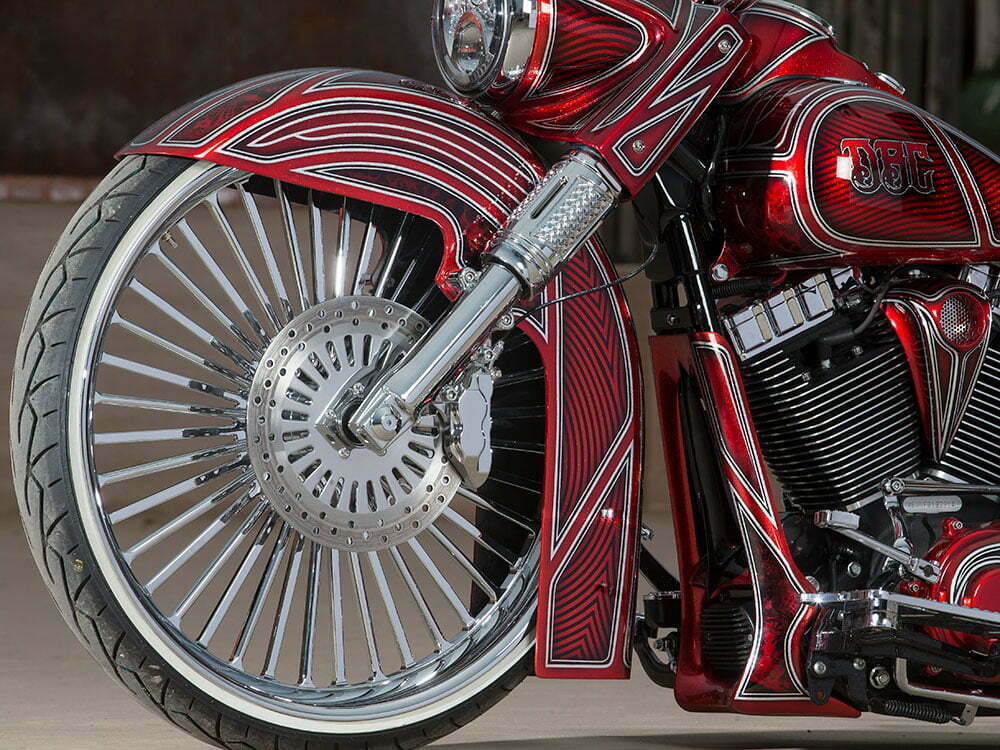 Shope didn’t go small on the front wheel. The big hoop measures in at 26 inches in diameter. 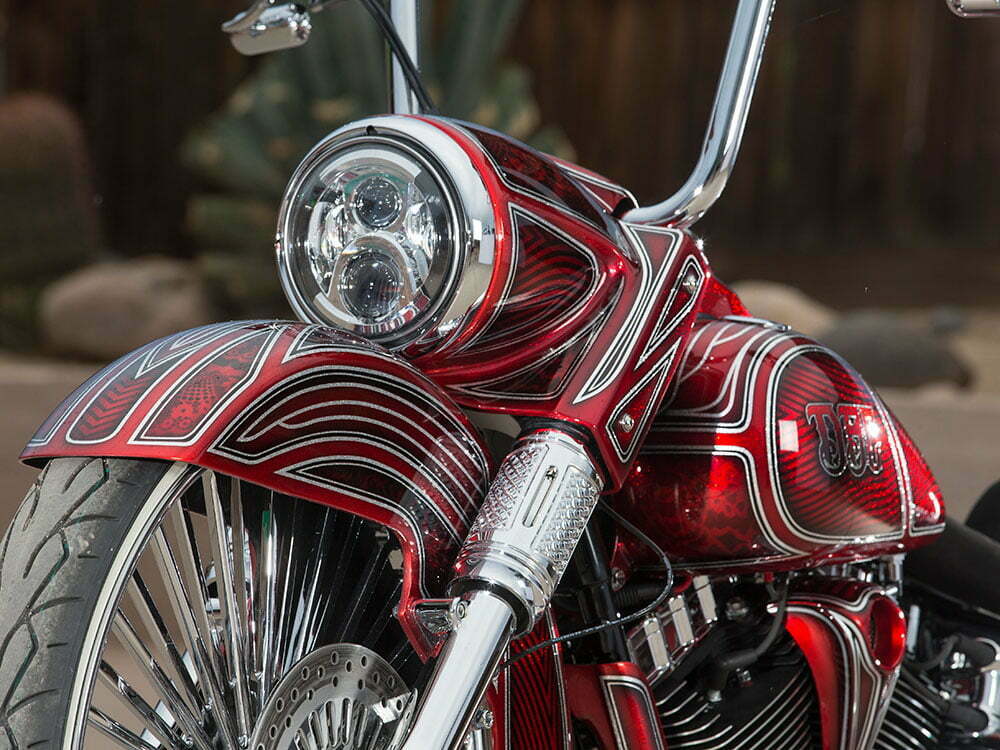 Dirty Bird Concepts’ headlight and nacelle lookin’ all sexy and whatnot. 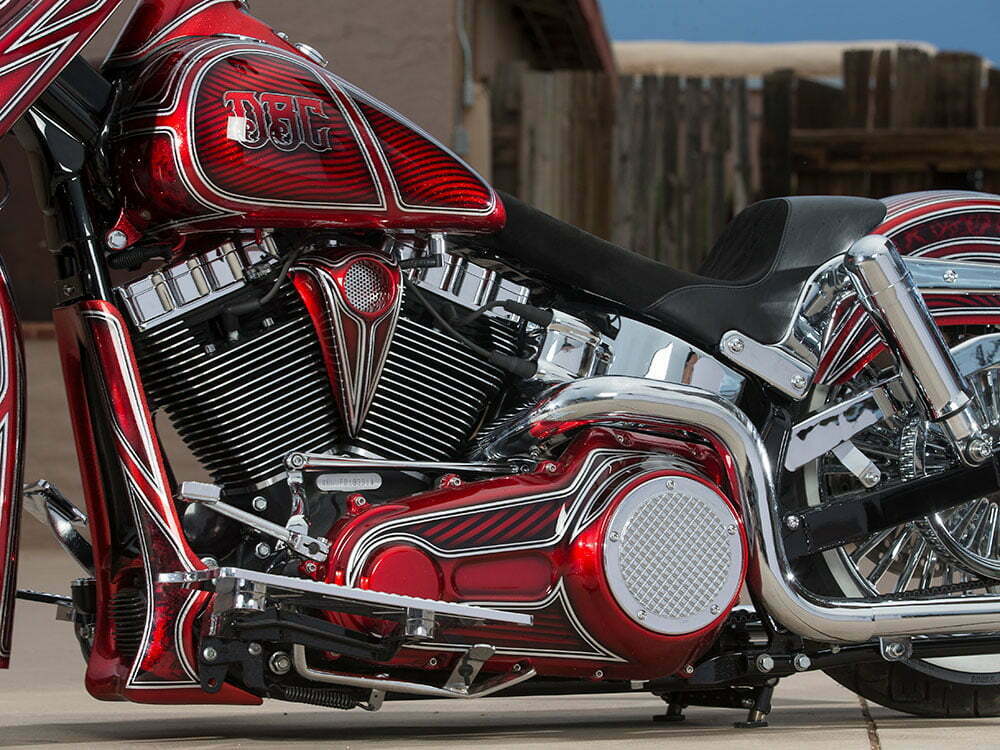 I normally don’t call out horn covers for looking good, but I’m making an exception here. This one fills the barrel gap nicely, looks good, and adds style to the primary side of the engine. The shocks and swingarm comprising the Dirtytail are about as far from a stock Softy rear suspension as it gets. 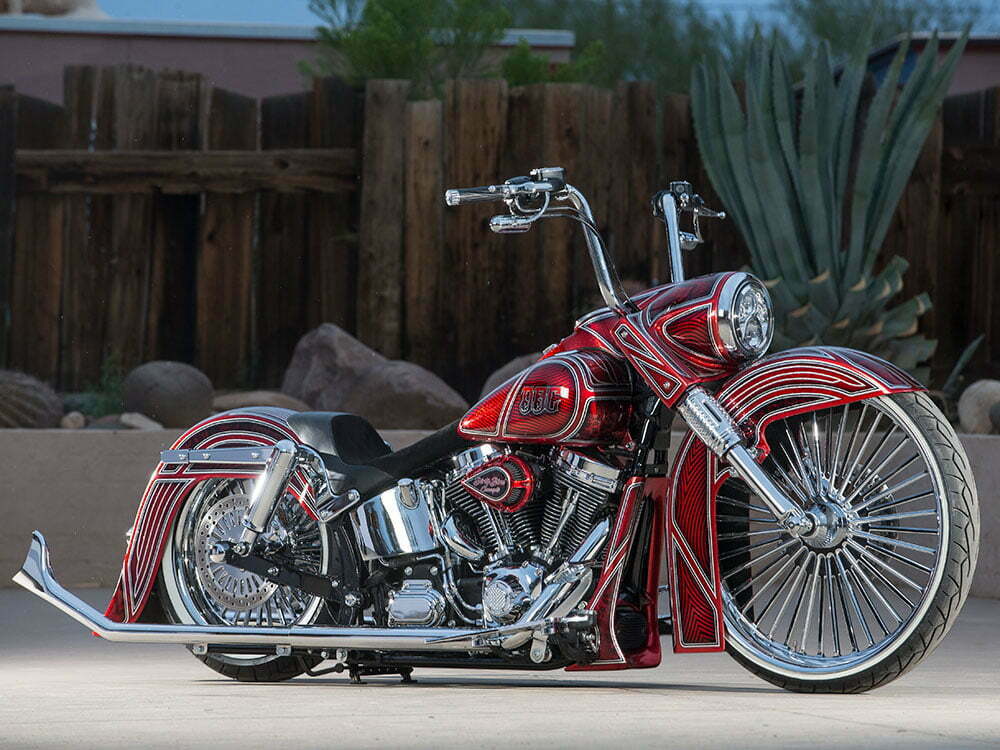 Between the generous metal flake and gobs of chrome, Shope’s vicla-inspired Dirtytail gets plenty of notice. 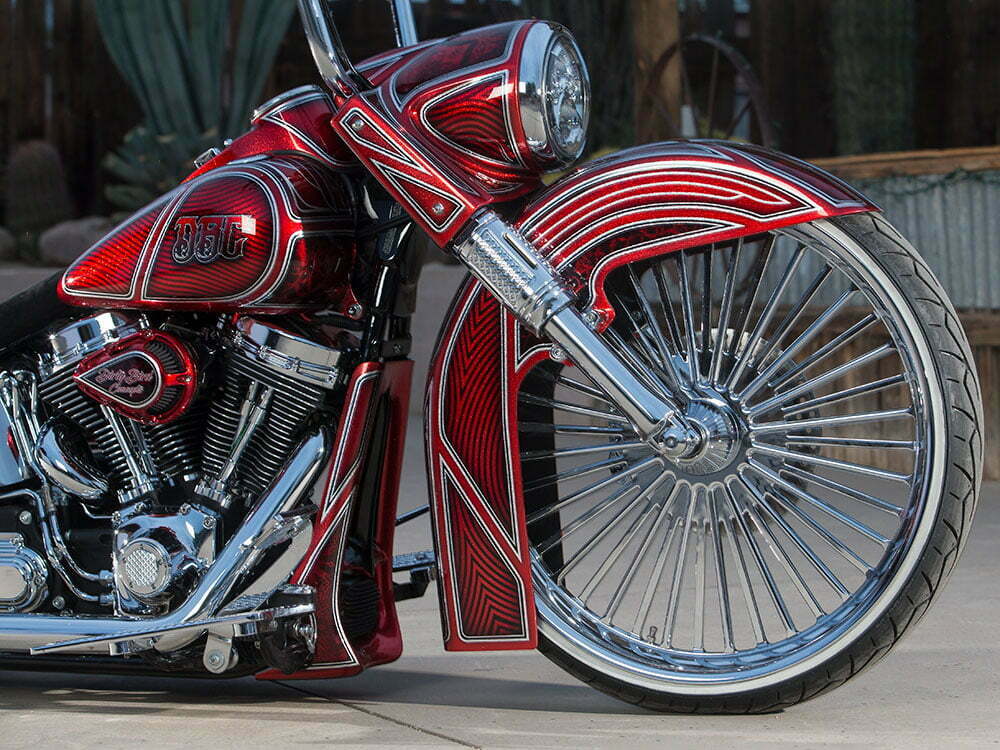 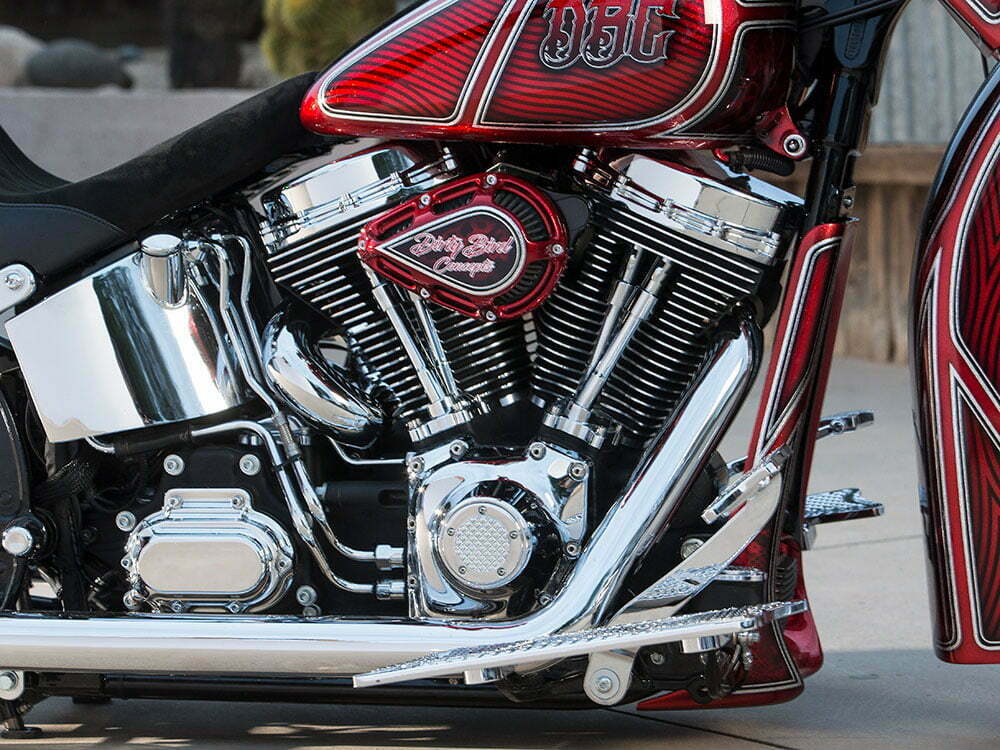 Sideshow’s Cycles did a bang-up job dressing up the powerplant. 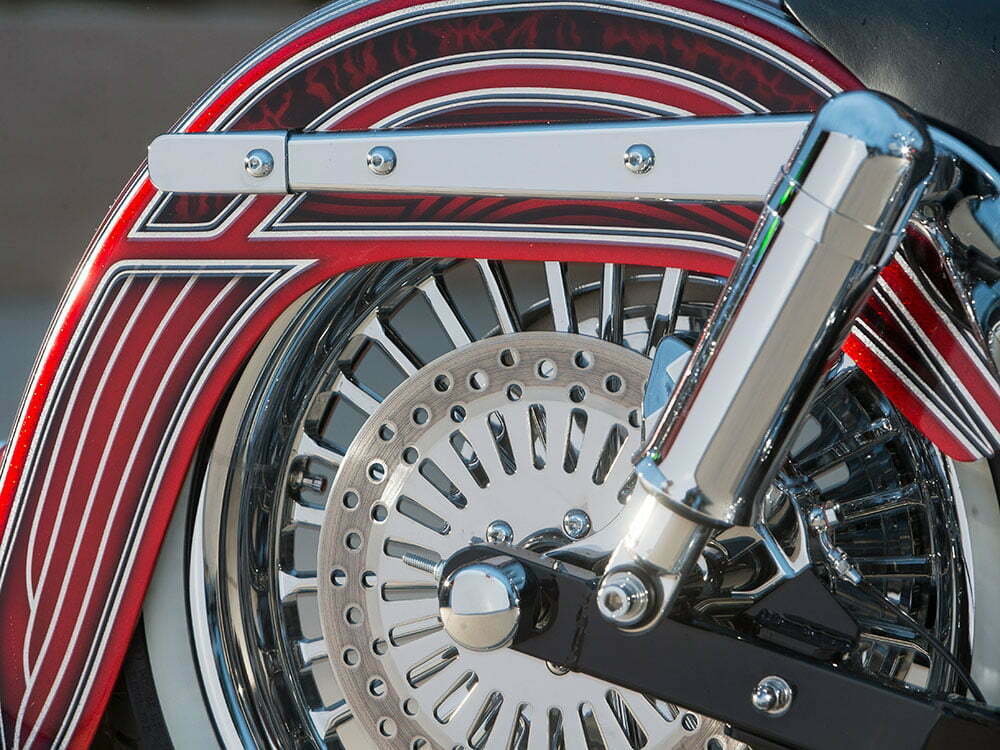 The Dirtytail’s shocks bolt to the rear of the bike much like you’d find on a Sportster or Dyna. 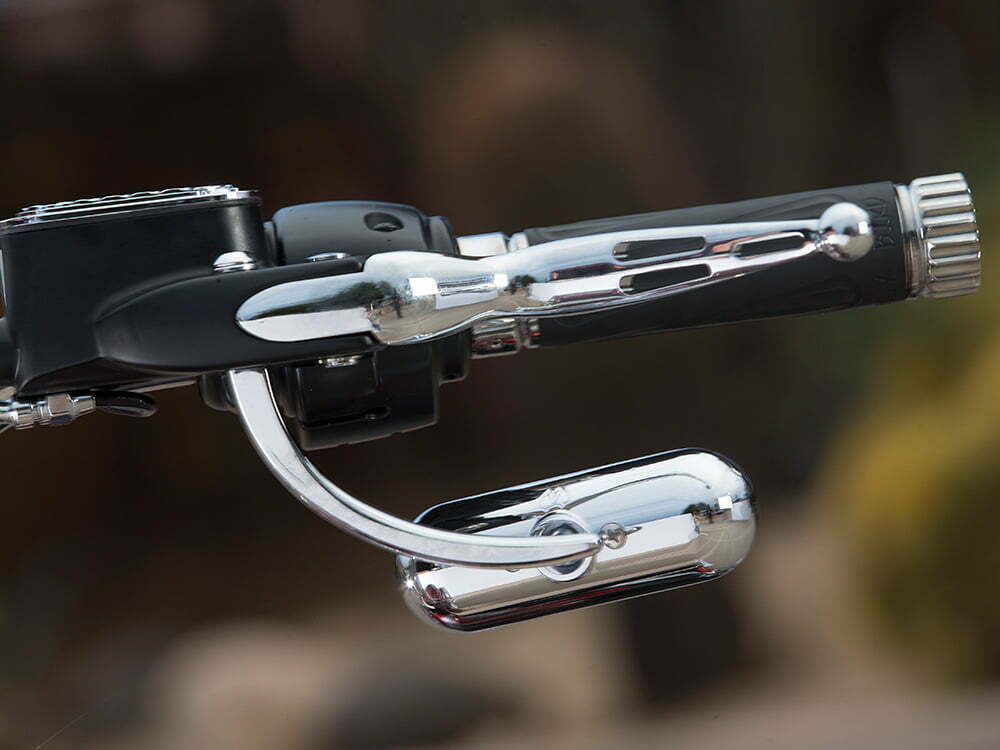 Willie G. Hot Bike Staff Each year the Sturgis Motorcycle Museum & Hall of Fame has the perfect excuse for […]