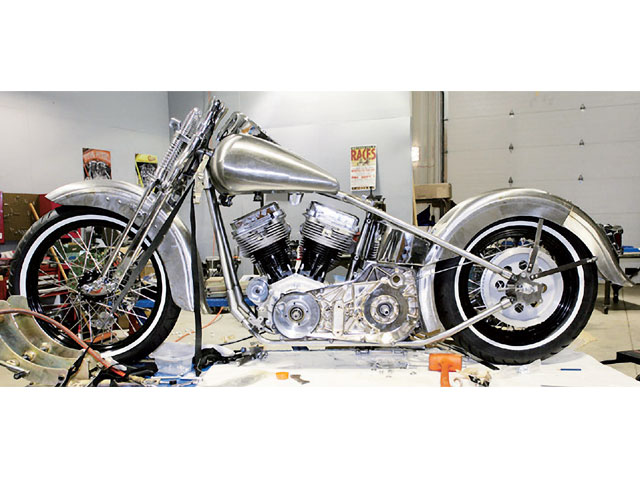 Last time we saw the J&P; raffle bike for the National Motorcycle Museum, it looked like this. Here’s a quick refresher on some of the parts and modifications on this project. 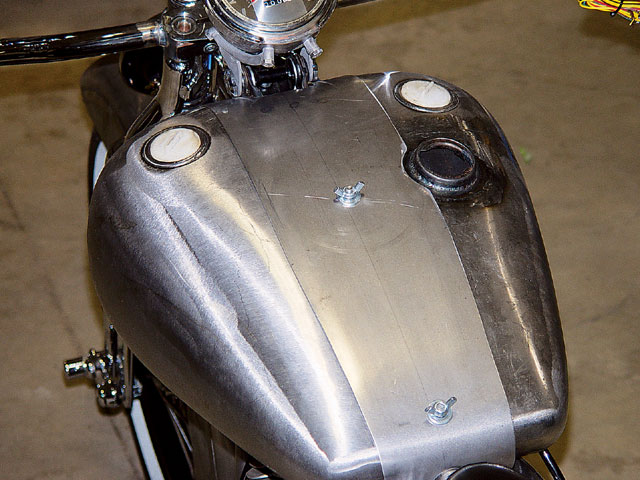 For that retro look and function, Underground Art Studios took a set of J&P; Cycles flat-side Fat Bob tanks and welded an oil tank into the rear of the right-side tank. 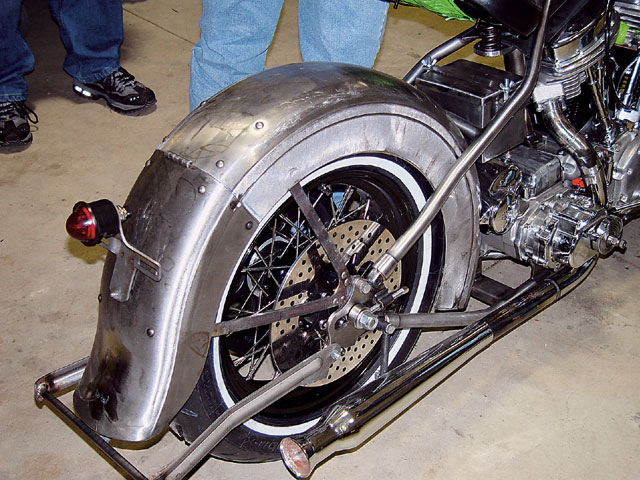 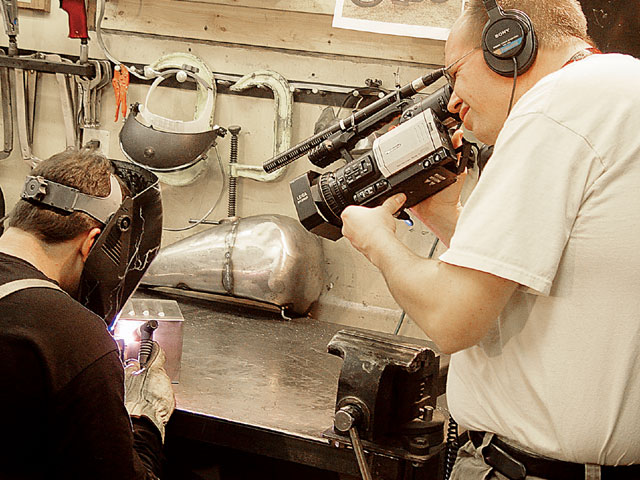 The entire time the bike was being built, the Corbin’s Ride On video crew was hanging out, filming the process for future episodes of the ’06 season. 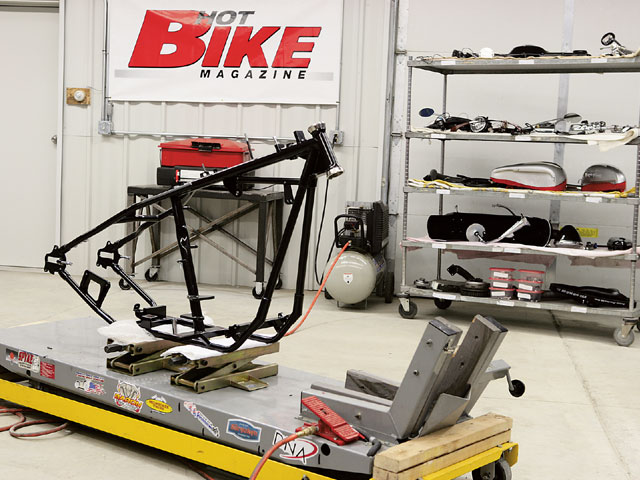 Once the Chopper Guys Fat Guy rigid custom bobber frame was doused in a fresh coat of black, it was time for final assembly. 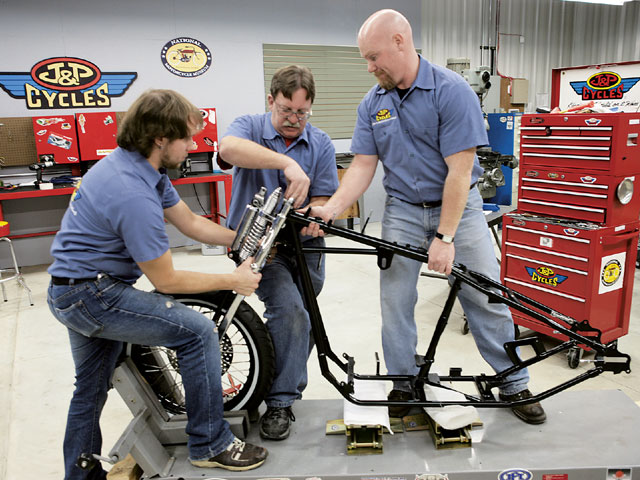 The J&P; crew started things off by bolting on a Paughco Wide Springer frontend with a Performance Machine custom Springer two-piston caliper to the neck. Between the legs they used a DNA 40-spoke wheel with a Russell stainless-steel rotor. 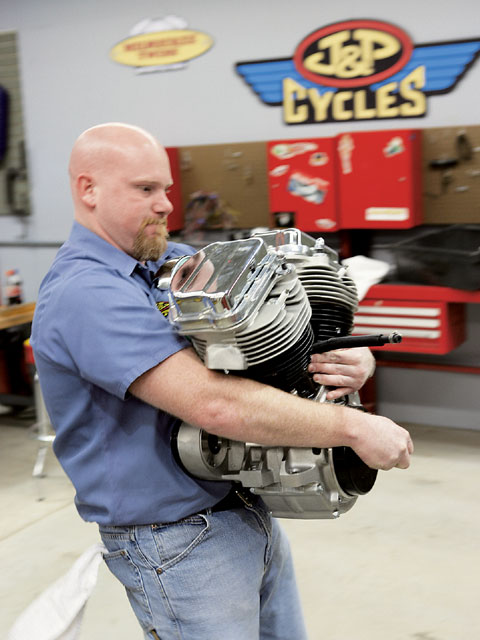 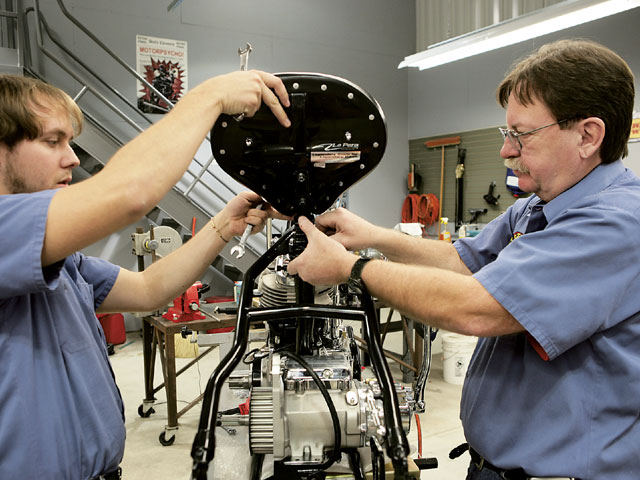 For a custom look, the J&P; team utilized an upside-down valve and valvespring from a big-block Chevy motor for the seat spring. 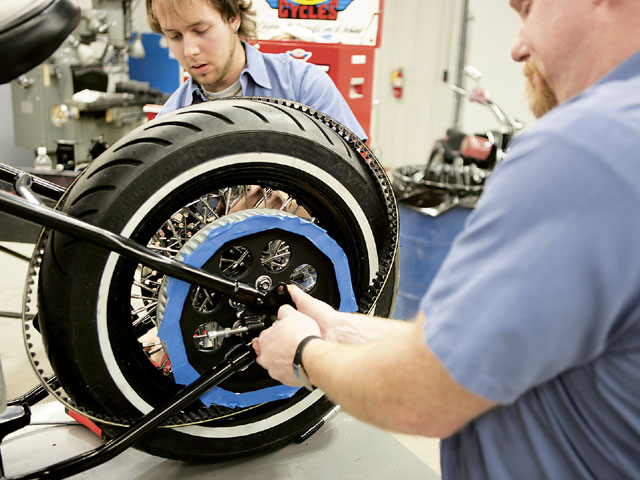 To hold up the rear of the bike, another DNA 40-spoke wheel and Avon whitewall was used. 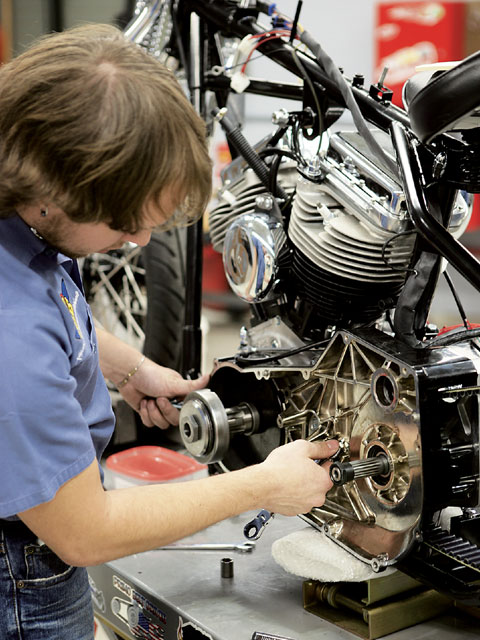 Finishing off the driveline, J&P; bolted on a Primo Rivera chain-drive primary and pro clutch.

One of Spyke’s Stealth starters was also installed.

J&P; 1-3/4-inch trumpet mufflers were used so that the pipes would run the length of each side of the bike.

While the J&P; crew was assembling the bike, Scott Takes of Underground Art Studios was busy working on a paint scheme for the sheetmetal.

One of the most important parts of the painting process was incorporating the National Motorcycle Museum logo into the project.

After covering the sheetmetal with a silver base with red paneling, Scott taped off the tank so he could paint the museum logos in the center of either side of the tanks.

Rather than using gold paint for the eagle section of the logo, Scott kicked things up by utilizing his old-school skills to lay down some gold leaf to represent the eagle.

Then he used a stencil he’d cut out to airbrush the bike section of the logo onto the tank.

After duplicating the logo on the other side, the tank was sprayed with a couple coats of clear to protect the delicate details and bring it all to a high luster.

Then it was back to the J&P; shop, where the guys installed the tank, J&P; Cycles’ FL-style speedometer, teardrop headlight, and modified burly bikini bars.

Down below, a set of J&P; oval floorboards and Milwaukee Twins chrome and polished forward controls were installed.

If you recall, last month we started covering a custom build project involving J&P; and the National Motorcycle Museum and Hall of Fame. If you missed that article, here’s a quick recap. For the past couple of years, HOT BIKE and J&P; have teamed up and given away a ground-up custom built with parts found in J&P;’s huge parts catalog. Well, the man behind J&P;, John Parham, is a motorcycle fanatic and has a special penchant for older bikes. In fact, for quite some time now John has been heavily involved with the National Motorcycle Museum and Hall of Fame, often offering up his collection of rare bikes for the museum’s use.

The goal of the National Motorcycle Museum and Hall of Fame is to continue the passion of those who built the groundwork for what motorcycling has become through documentation, preservation, and education. Every year, to help support its mission and raise money, the museum raffles off a motorcycle. This year, however, J&P; decided to jump on board and help out the museum by offering up its parts and services to build the raffle bike. Raffle tickets are sold for $5 a piece or six for $25, and the raffle concludes with the drawing of the winner at the end of the year. Tickets are available at the museum, J&P; Cycles, and events J&P; attends, along with the J&P; Cycles and National Motorcycle Museum websites (www.jpcycles.com or www.nationalmcmuseum.org, respectively). The build project will also become a six-segment series for J&P; Cycles running in the ’06 season of Corbin’s Ride On. J&P; will be building the bike over the six segments that will run in the early part of the season starting in late February and then again during the fall rerun season.

Knowing John’s attraction for motorcycles of yesteryear, it only makes sense that the J&P; crew decided to build a retro-style rigid. Last month we watched as the J&P; crew assembled the rolling chassis and then began some modifications to make this bike a real retro standout. To say the J&P; build team moves quickly would be an understatement-by the time we caught up with them for this installment, they were in the process of finishing up the paint and final assembly.

By the time we had to leave, the bike was almost finished. There were only a few more details to be buttoned up, and then the retro ride would be ready for its first cruise. Check back next issue, when we’ll give the bike a full feature and get you a closer look at all the custom details. Don’t forget to check out the J&P; website (www.jpcycles.com) or the National Motorcycle Museum website (www.nationalmcmuseum.org) to find out where you can see this bike in person and how you can get your hands on some raffle tickets.

There’s no denying that the return of the FXR is in full swing. Love it or hate it, what was […]

The Race Of Gentlemen Heads To Santa Barbara

Hot on the heels of the smashingly successful Bradford Beach Brawl, The Race of Gentlemen (TROG) announced it will be […]

The American V-Twin industry is ever-changing; fads come and go, fashions cycle through on a semi-regular basis, and the type […]

Photo Gallery: The Bikes of the Mama Tried Show