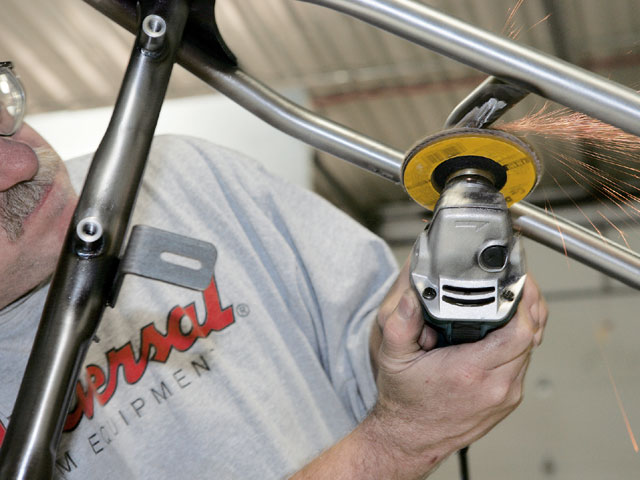 For this project, the frame has a stock rake and no stretch in the backbone or downtubes. Jeff Wiley was given the task of cleaning the frame of all unnecessary tabs and brackets. 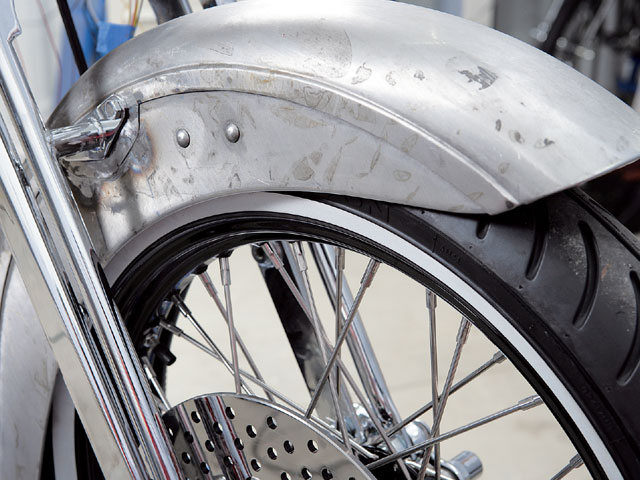 We stepped out for a quick cup of coffee, and before we knew it the crew had a rolling chassis together. They even had the 88ci V-Twin Panhead motor with STD heads and S&S; crankcases and a Milwaukee Twins trans mounted in the frame. For that classic look, a Paughco wide Springer with a mono shock was bolted to the frontend, along with a J&P; Ducktail front fender. 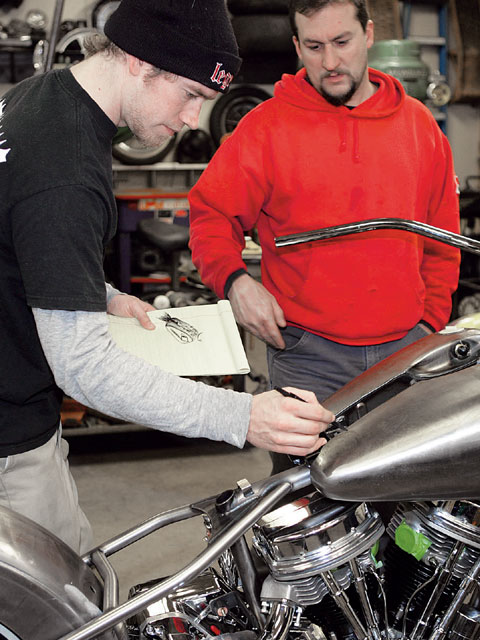 J&P; decided to cut up the right side of the J&P; Flatside Fat Bob gas tank and weld in an oil tank in the back, similar to the design on old Indians and Harley 45s. First, Scott Takes, owner of Underground Art Studios, studied the stock tanks as he planned how he intended on cutting and welding. 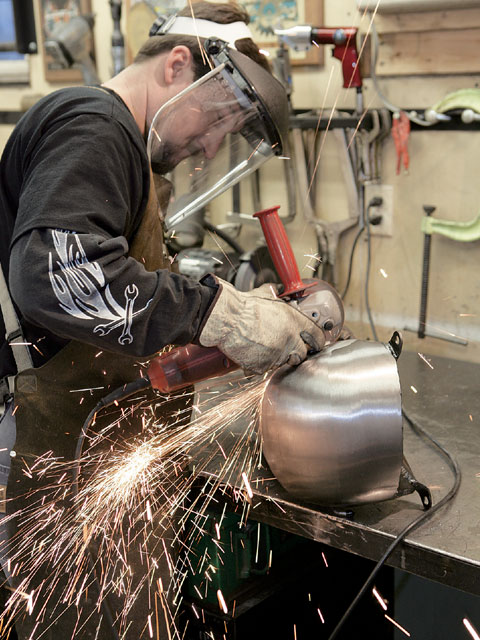 With the plan in place, out came the cutting wheel. The sparks began to fly as they cut up the right-side tank. 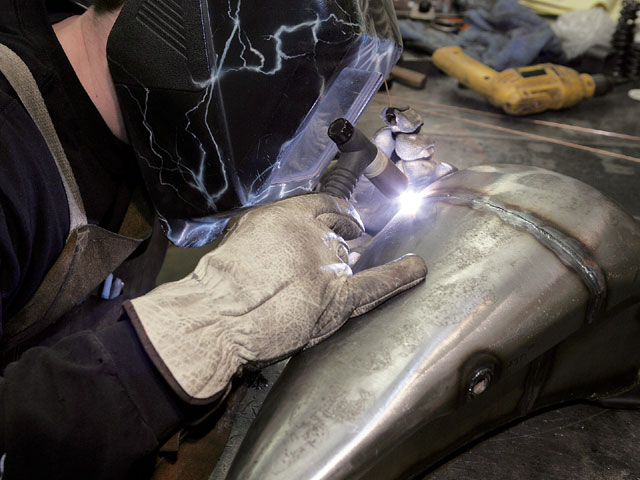 Once the tank was opened up, they welded in a wall to separate the oil and fuel. Then the gas tank was welded back together. 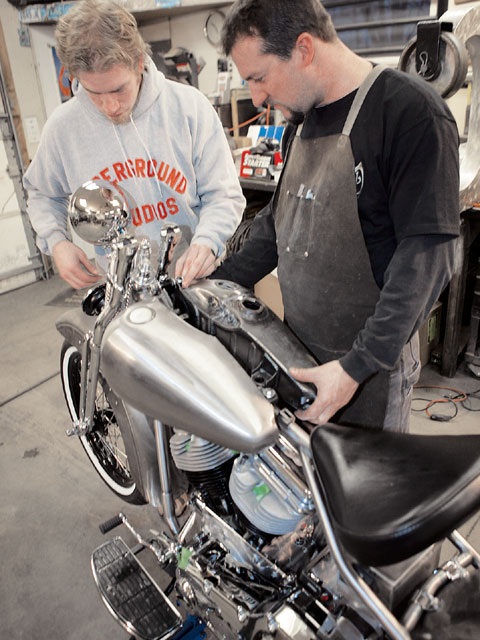 The tank was then set back on the frame so the J&P; crew could see how it looked, as well as to make sure everything lined up correctly. 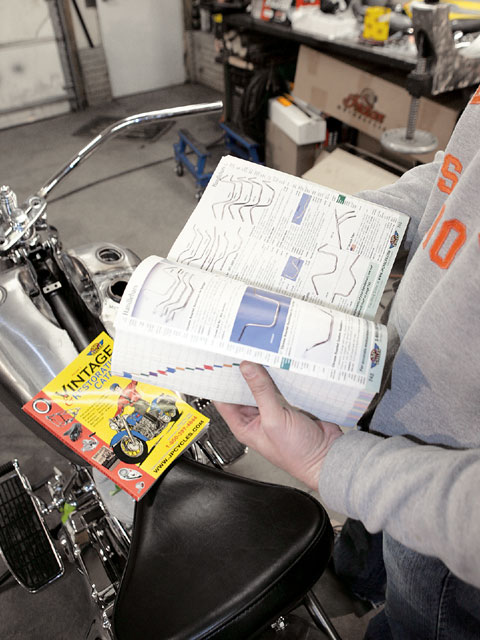 With two J&P; parts catalogs to look through (a Harley book and a Vintage book), it was easy for the build team to find all the parts they needed to bolt right on or use as a basis for modification. 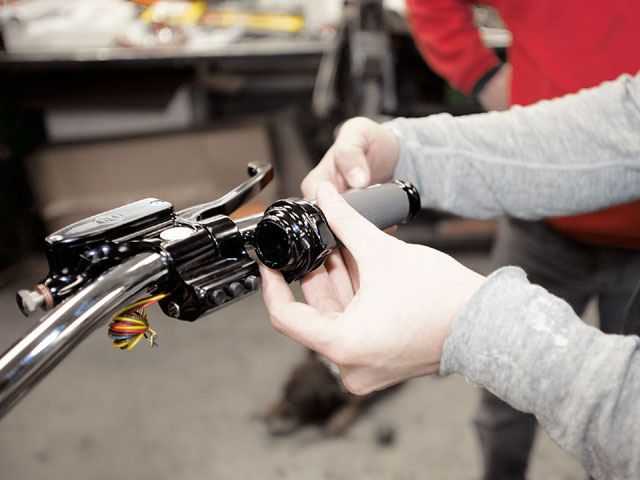 A set of bikini beach bars was modified with the center section cut out and each bar welded directly to the top triple-tree clamp to follow the lines of the board track-era bikes. After the bars were modified, a set of black Performance Machine grips and controls was mounted to the bars. 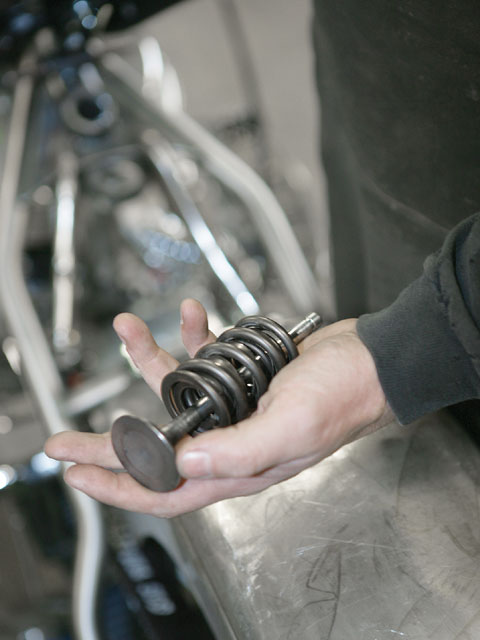 Originally, the build crew was going to use a leaf spring for the seat, but they decided that even the seat spring needed a custom look. Their fabricator, Aaron Franck, came up with a unique spring system for the seat: an upside-down valve and valvespring from a big-block Chevy motor. 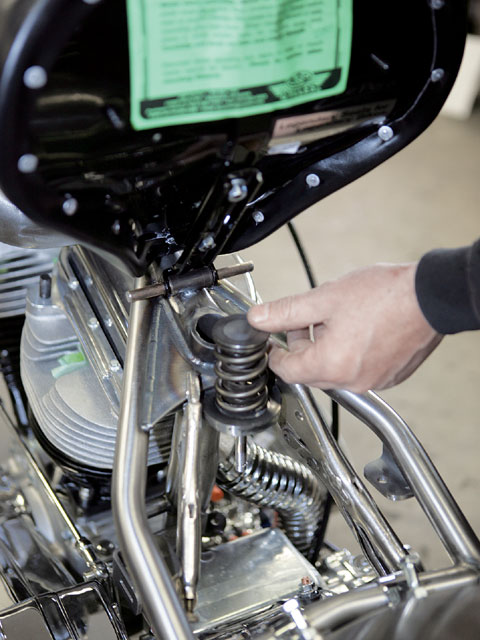 The front of the LePera solo seat was mounted on a hinge, and then the valve and spring were welded to a bracket in the seat-pan area of the frame.

Keeping the bike upright is a pair of 40-spoke wheels from DNA. The rear wheel is wrapped in a 16-inch Avon Venom X whitewall tire.

J&P; wanted a dual-exhaust look with Trumpet mufflers coming out each side.

This required the assistance of some old pipe bends Aaron had lying around his shop; it was just a matter of figuring out which ones would work best.

Once again, J&P; went with style and function with the addition of a V-Twin early-style taillight mounted to the hinged rear fender and a Bugle horn, also from V-Twin.

A custom dash with a key switch and indicator lights was fabricated and mounted to the Fat Bob tanks.

Traditionally, J&P; Cycles, HOT BIKE, Street Chopper, and Hot Rod’s Bike Works have collaborated annually on a sweepstakes bike-build project that was won by one lucky contestant. This year, the contest helps support the National Motorcycle Museum in Anamosa, IA. Founded in 1989, the National Motorcycle Museum strives to preserve and provide a continuously evolving historical account of how the motorcycle has evolved from a spindly bicycle frame and motor to an iconic mode of transportation. The museum pays homage to the inventors, visionaries, designers, builders, mechanics, modifiers, racers, riders, risk-takers, dreamers, and doers who embraced motorcycling as more than just a hobby but also as a way of life.

Also located in Anamosa, J&P; Cycles, founded by John Parham and his wife Jill, has been supporting the motorcycle industry since 1979. From the beginning, J&P; Cycles has sought to provide motorcycle enthusiasts with a wide selection of the best parts and accessories through its free mail-order (for U.S. and Canadian customers) catalogs and website (www.jpcycles.com). As an avid motorcycle collector, John has been heavily involved with the National Motorcycle Museum since its inception.

Each year the National Motorcycle Museum raffles off a bike to raise funds. This year, J&P; Cycles has decided to provide the bike for the raffle by building a bobber with parts carefully selected from its catalogs. Starting in January 2006, raffle tickets will be sold at $5 a piece or six for $25, concluding with the drawing of the winner at the end of the year. The museum is a non-profit corporation and is entirely funded by donations from corporations and individuals. Tickets will be available at the museum, J&P; Cycles, and events J&P; attends, as well as at the J&P; Cycles and National Motorcycle Museum websites (www.jpcycles.com and www.nationalmcmuseum.org, respectively).

The bobber bike-build project will also become a six-segment series for J&P; Cycles running in the 2006 season of Corbin’s Ride On. J&P; will be building the bike over the six segments that will run in the early part of the season, starting in late February and then again during the fall rerun season.

After spending several days poring through the J&P; catalog for the components to produce the desired bobber look, the crew at J&P; decided that a Chopper Guys Fat Guy rigid custom bobber frame, V-Twin panhead motor, Paughco Springer frontend, Rivera/Primo primary with a pro clutch, and the new Spyke Stealth starter would be a good basis for their retro ride. J&P; designer Scott Takes simply states, “The plan is to build a bike that makes us remember where we started from-history tells the story.”

With most of the mockup and fabrication completed, the “J” and “P” behind J&P;, John Parham, showed up to see how things were going and give his approval. As a fan of classic and antique bikes, John appreciated this collaboration of retro looks and modern technology and gave his nod of approval. Follow along next time as we finish up the build with paint and final assembly. Don’t forget to check out the National Motorcycle Museum, or visit J&P; Cycles on the road or online to learn how you can get your raffle tickets to win this bad bobber.

01. Here is a tank I was in the process of making for a customer. The pieces have all been […]

Wyman Wins King of the Baggers at Road Atlanta