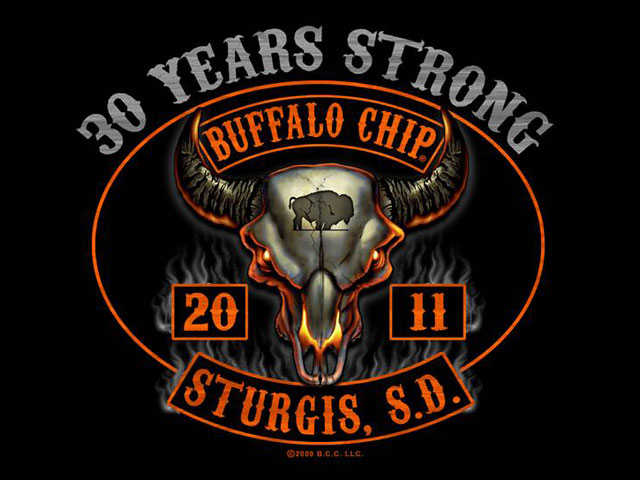 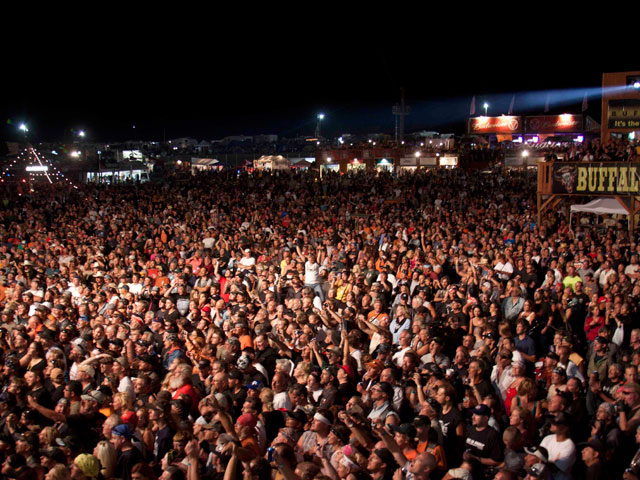 **BUFFALO CHIP CAMPGROUND, SD (April 11, 2011) **- The epic grounds of the Legendary Buffalo Chip have witnessed a raucous and remarkable array of world-class rockers and musical acts. From Ozzy Osbourne to Kid Rock, Bob Dylan to Motley Crue, the Chip has quickly become the home of the summer’s largest and most authentic biker music festival.

This year as Sturgis’ premier entertainment venue and motorcycle travel destination celebrates its 30th anniversary; they are going to great lengths to provide guests with an illustrious music lineup guaranteed to strike a chord with bikers around the world. The Legendary Buffalo Chip is proud to once again heat up this year’s Rally Week festivities with a selection of big name acts including Alice Cooper, Toby Keith, Def Leppard, Styx, Lynyrd Skynyrd, George Thorogood, Leon Russell and Bachman & Turner. This is only a partial list with several big names still to be announced.

Guaranteed to rock and shock the Chip’s celebrated outdoor amphitheatre for what’s sure to be a once-in-a-lifetime performance on Saturday, August 6 is the world’s most beloved heavy metal entertainer, Alice Cooper. American rock singer, songwriter and musician whose career spans more than five decades, Cooper is a multi-platinum artist with hit singles that include “I’m Eighteen,” “School’s Out,” “Under My Wheels,” “No More Mr. Nice Guy,” Billion Dollar Babies,” “Only Women Bleed,” “Welcome to My Nightmare,” “Poison,” and “Muscle of Love”. Cooper invented his own breed of theatrical rock and is infamous for his riveting and bizarre stage shows. With a garage rock heavy metal fusion sound that is all his own and performances often described as a cross between a horror movie and a vaudeville show, Cooper is sure to shock and entertain. That same night Detroit rockers Pop Evil will take the stage.

Also performing on Saturday, August 6 is American Rock Band, Pop Evil. Hailing from Grand Rapids, MI, Pop Evil’s debut studio album, Lipstick on the Mirror, was released in 2008 and features several radio favorites including “Somebody Like You”, and “Stepping Stone”. They have toured the country with hard rock superstars such as Puddle of Mudd, Tesla, P.O.D, and Saliva.

The Legendary Buffalo Chip welcomes Canadian rock group, Bachman & Turner Sunday, August 7. Randy Bachman and C.F. “Fred” Turner, co-founders of 70’s rock quartet Bachman-Turner Overdrive, have reunited after more than 20 years apart and will be bringing their long list of hits to a packed house of rowdy Chipsters. With a staggering 120 platinum, gold and silver discs, Bachman & Turner’s stripped down blue-collar rock ‘n’ roll is a perfect fit for the hoards of motorcycle-riding music lovers who will be congregating at the Legendary Buffalo Chip for the iconic biker campground’s 30th anniversary. One of the biggest hit machines of the 1970s with classics such as “Takin’ Care of Business”, “You Ain’t Seen Nothin’ Yet”, “Roll On Down The Highway”, “Let It Ride”, “Hey You”, “Not Fragile” and “Four Wheel Drive”, many of Bachman & Turner’s songs have become anthems for the motorcycling community.

Monday night, August 8 will be buzzing with excitement and electricity as Def Leppard takes the stage to celebrate Sturgis Rally Week’s official opening day. What many describe as the real British invasion, the iconic English heavy-metal rock band was formed in 1977. Def Leppard emerged from Sheffield as part of the New Wave of British Heavy Metal movement in the late 70’s and later went on to create their own unique sound with hits such as ‘Rock of Ages’ and ‘Photographs’. Def Leppard has sold more than 65 million albums worldwide, and is one of only five rock bands with two original studio albums selling over 10 million copies in the U.S. With a slew of hits including “Billy’s Got a Gun”, “Women”, “Animal”, “Pour Some Sugar on Me”, and “Hysteria”, you can be sure that Def Leppard will be pouring some of their proverbial sugar on a giant swarm of ecstatic bikers opening night.

A Buffalo Chip favorite, Toby Keith will be serving up good times and good music on Tuesday, August 9. Unapologetic, undeterred and unbelievable on stage, Toby Keith represents the pride of American Country music with a style that bleeds red, white, and blue. Chipsters will be treated to an array of hits from more than two decades of successful music making, including those from his new album, “Bullets in the Gun”. An American country music singer-songwriter and record producer, Toby Keith has proven himself as an exceptional musician and champion of the working class American. With more than 70 million career radio air spins and hits such as “Should’ve Been a Cowboy”, “How Do You Like Me Now?!”, “Wish I Didn’t Know Now”, “Who’s Your Daddy?” , and “American Soldier”, few others have attained the level of success and recognition that Keith has. Sturgis music fans expect the very best from the Legendary Buffalo Chip and Toby Keith delivers.

On Wednesday, August 10, Chipsters are in for a treat with Southern Rock luminaries, Lynyrd Skynyrd. Ripping it up onstage since 1964, Lynyrd Skynyrd is one of America’s paramount live bands. The term Southern rock may have never been coined if not for Skynyrd and their unique, bluesy trademark sound with ripping guitar licks and knack for lyrical detail. The guitar-heavy Jacksonville group embodies the Southern Rock lifestyle and consistently tears it up onstage unlike any other. With such legendary hits as “Sweet Home Alabama”, “Free Bird”, “That Smell”, “Gimme Three Steps”, “They Call Me the Breeze”, “I Know a Little”, and “Smokestack Lightning”, Skynyrd has provided motorcycle enthusiasts with an impressive string of biker anthems. The band was inducted into the Rock ‘n’ Roll Hall of Fame in 2006 and has also been voted as one of the top 100 greatest artists of all time by Rolling Stone Magazine and VH1.

Also gracing the renowned stage of the Legendary Buffalo Chip is celebrated artist, George Thorogood and the Destroyers. On Saturday night, August 13, Delaware Destroyer, George Thorogood is a multi-platinum artist who has successfully blended blues with a rock attitude and virtuosity on his trusty slide guitar that is unequaled in rock. Described as one of the hardest working men in rock and roll, with sixteen studio albums and five live albums he also boasts several hits including “Move It On Over”, “Who Do You Love?”, “Madison Blues”, “Bad to the Bone”, “One Bourbon, One Scotch, One Beer”, “The Sky Is Crying”, “Who Do You Love”, “I Drink Alone”, and “Get A Haircut”.

For thirty years the Legendary Buffalo Chip has proven itself as the heart of Sturgis Rally Week. Poised and ready to once again offer their visitors the complete biker experience, the Legendary Buffalo Chip has rounded up an enormous selection of biker-centric fun and festivities in addition to offering the summer’s biggest and most authentic music experience of Rally Week. More music announcements are forthcoming and reservations for multi-day passes or daily admissions are available online at BuffaloChip.com or by calling 605-347-9000 between 8 a.m. and 5 p.m. (MST) Monday through Friday.

The SuperTrapp exhaust comes with everything you need for a quick install. Once the old exhaust was removed, Eric Bennett […]

If you were in the Los Angeles area during the first weekend of June, we hope you got to experience […]