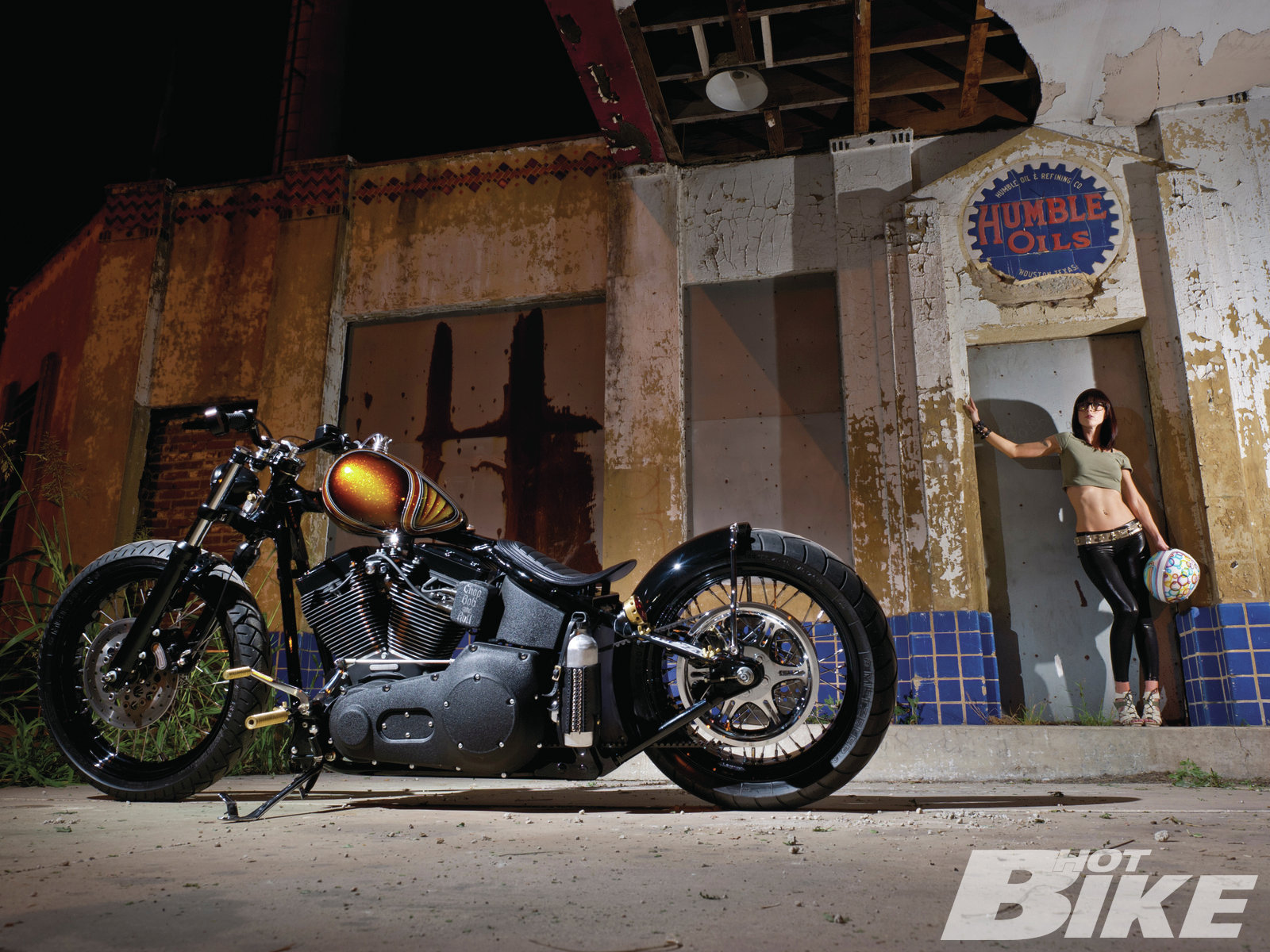 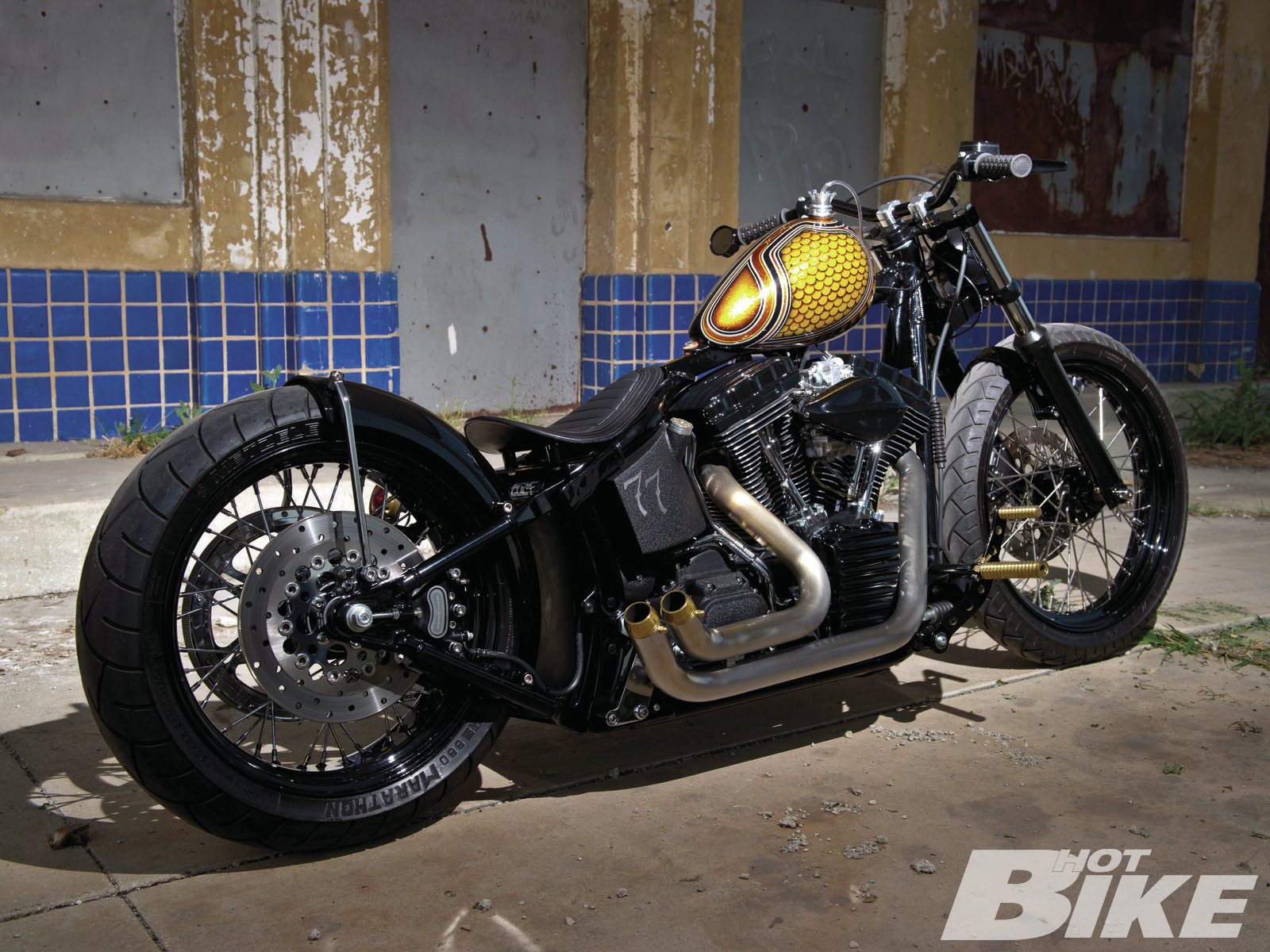 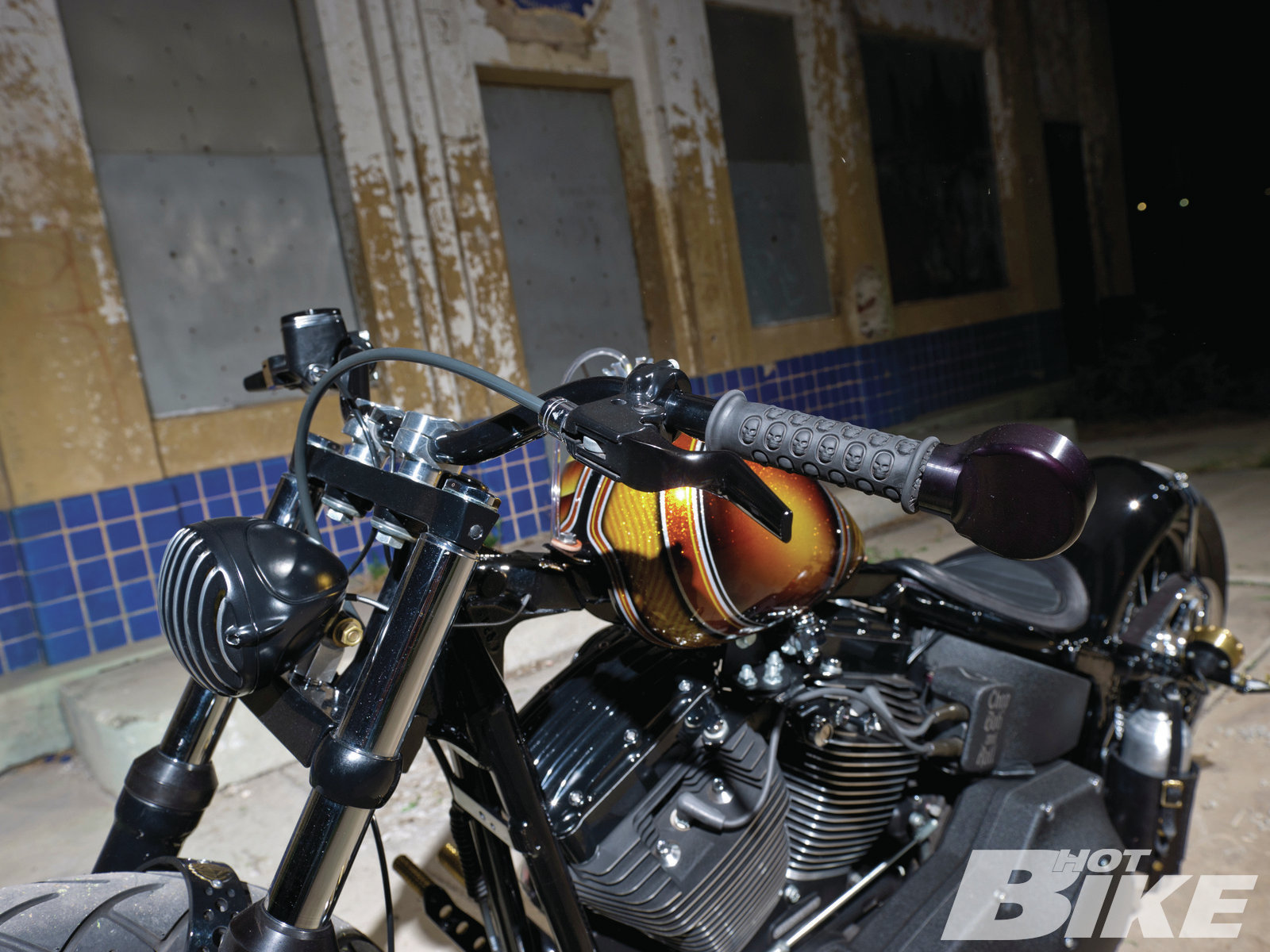 Scott cut the ends off the stock H-D levers for a sleeker appearance, then ditched the stock switches and added a Joker Machine bar end mirror on the left side of the handlebar. 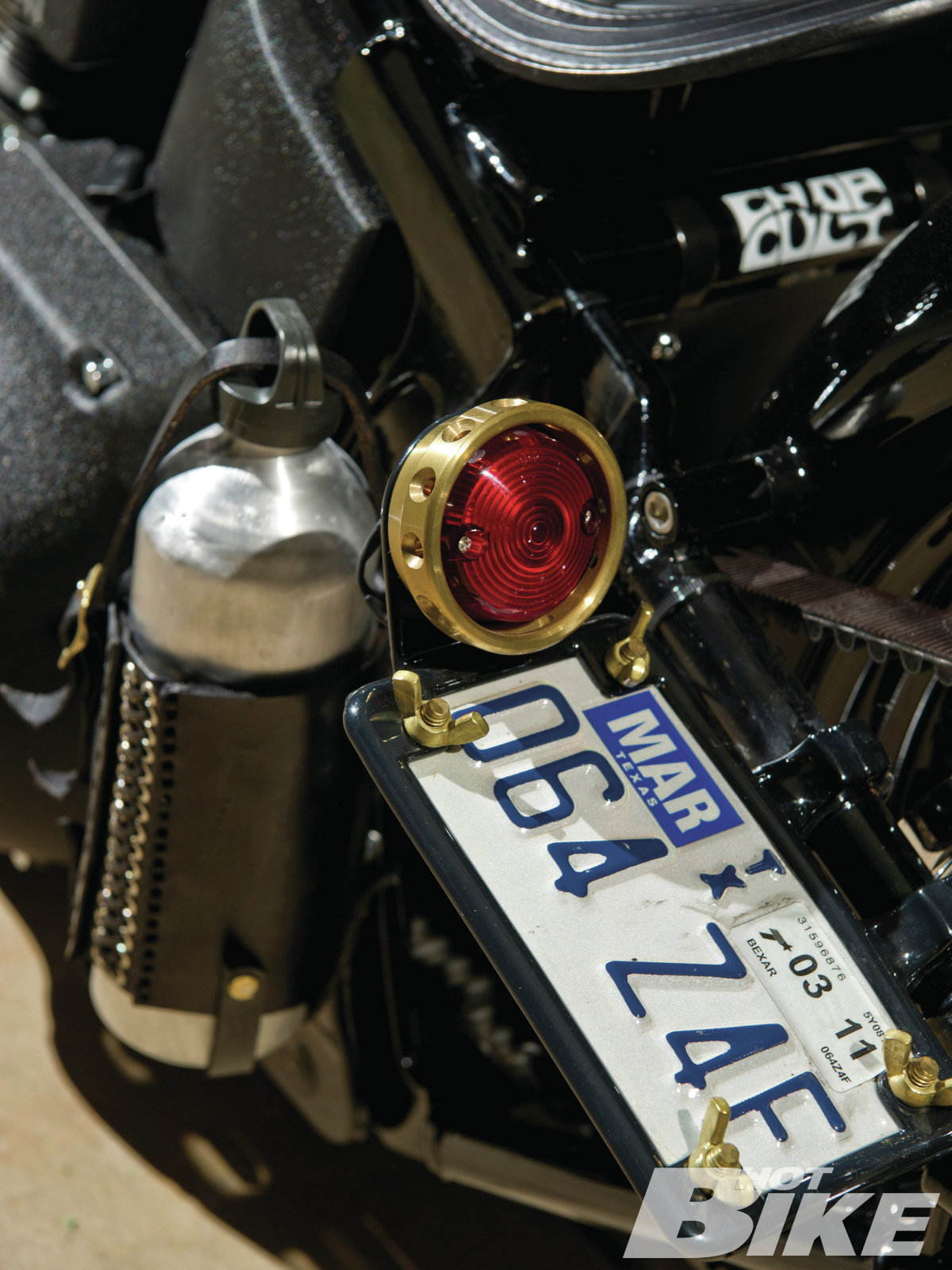 To make up for the small 2.1-gallon capacity of the Low Brow Alien tank, Scott stripped the exterior off a gas canister from a small camping stove, then made a leather pouch to hang the canister off left side of the bike when he needs extra fuel. 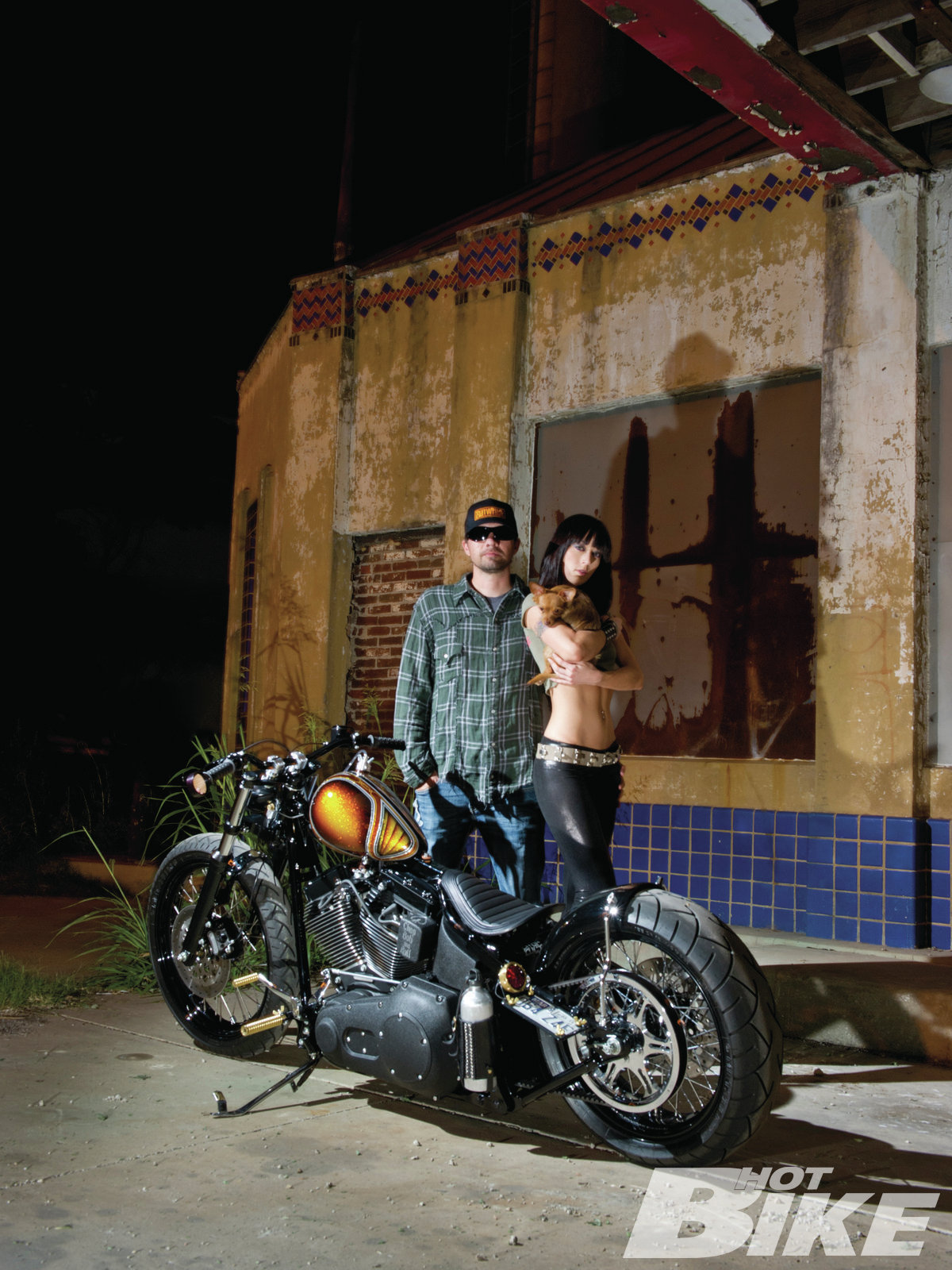 One happy family, Scott and Amy Hoepker and their pup, Lola. 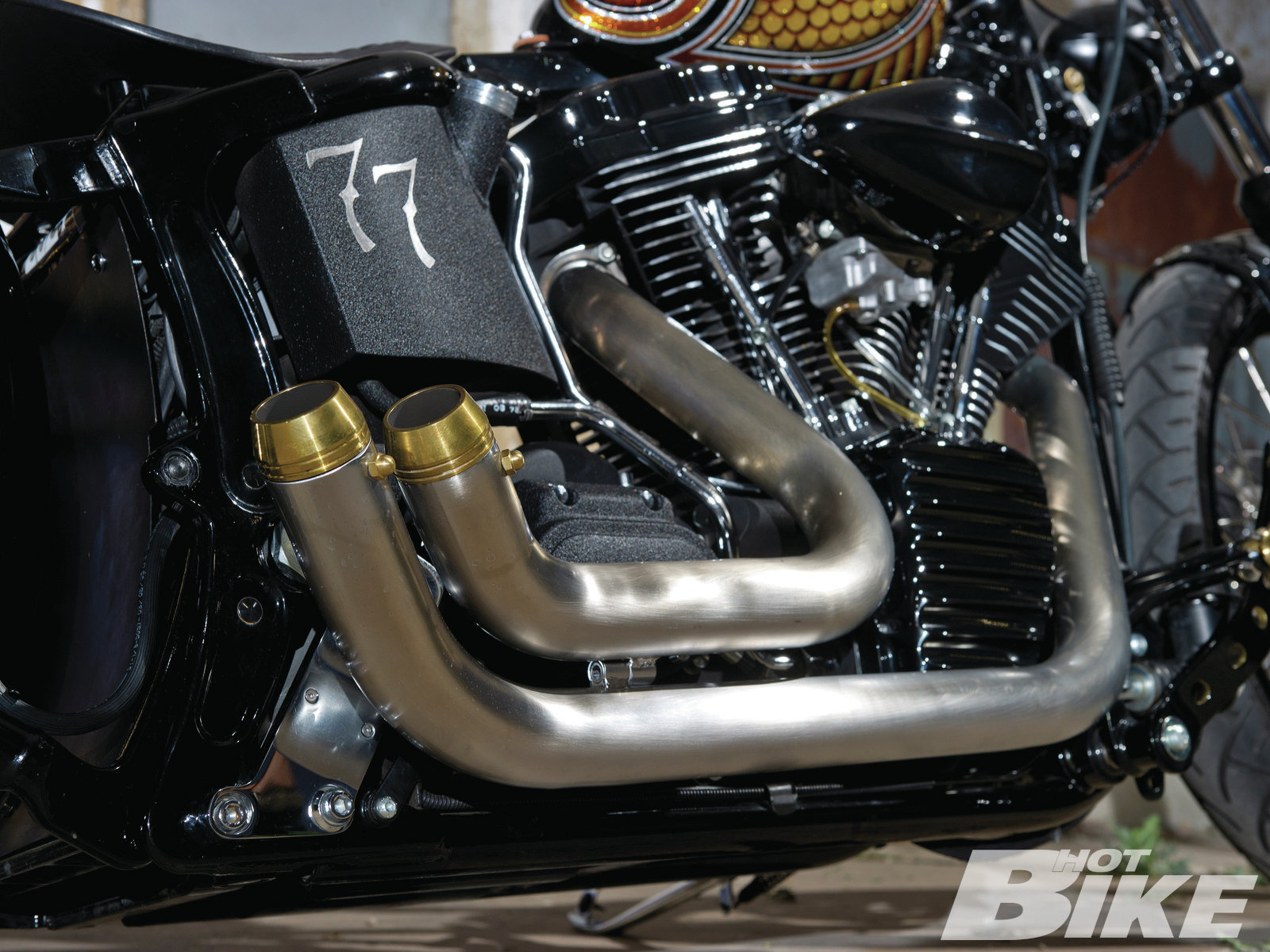 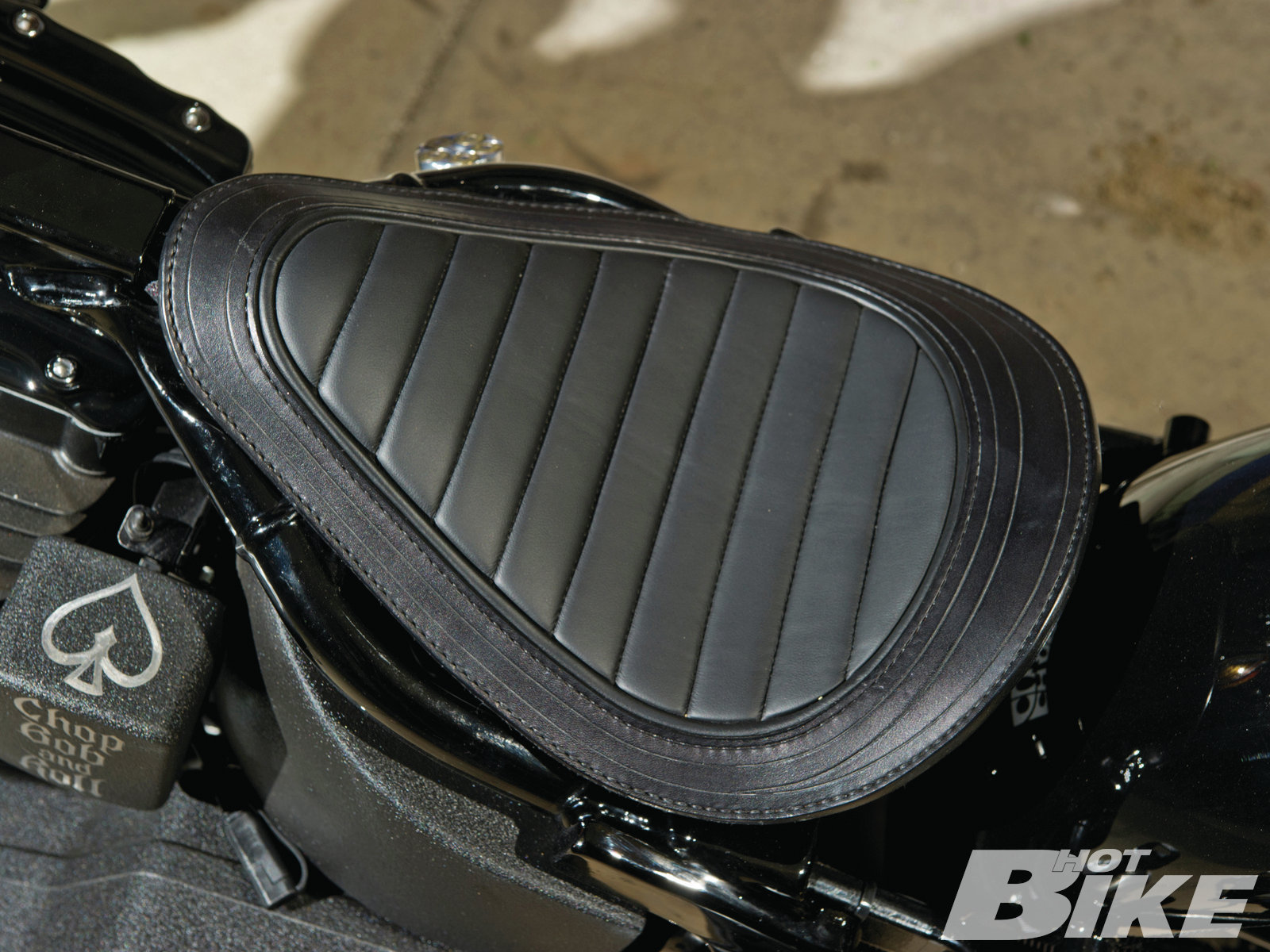 Christian at Xian Leather covered the Redtail Leather seat pan with a tuck and roll center section and a custom stitched outer trim. 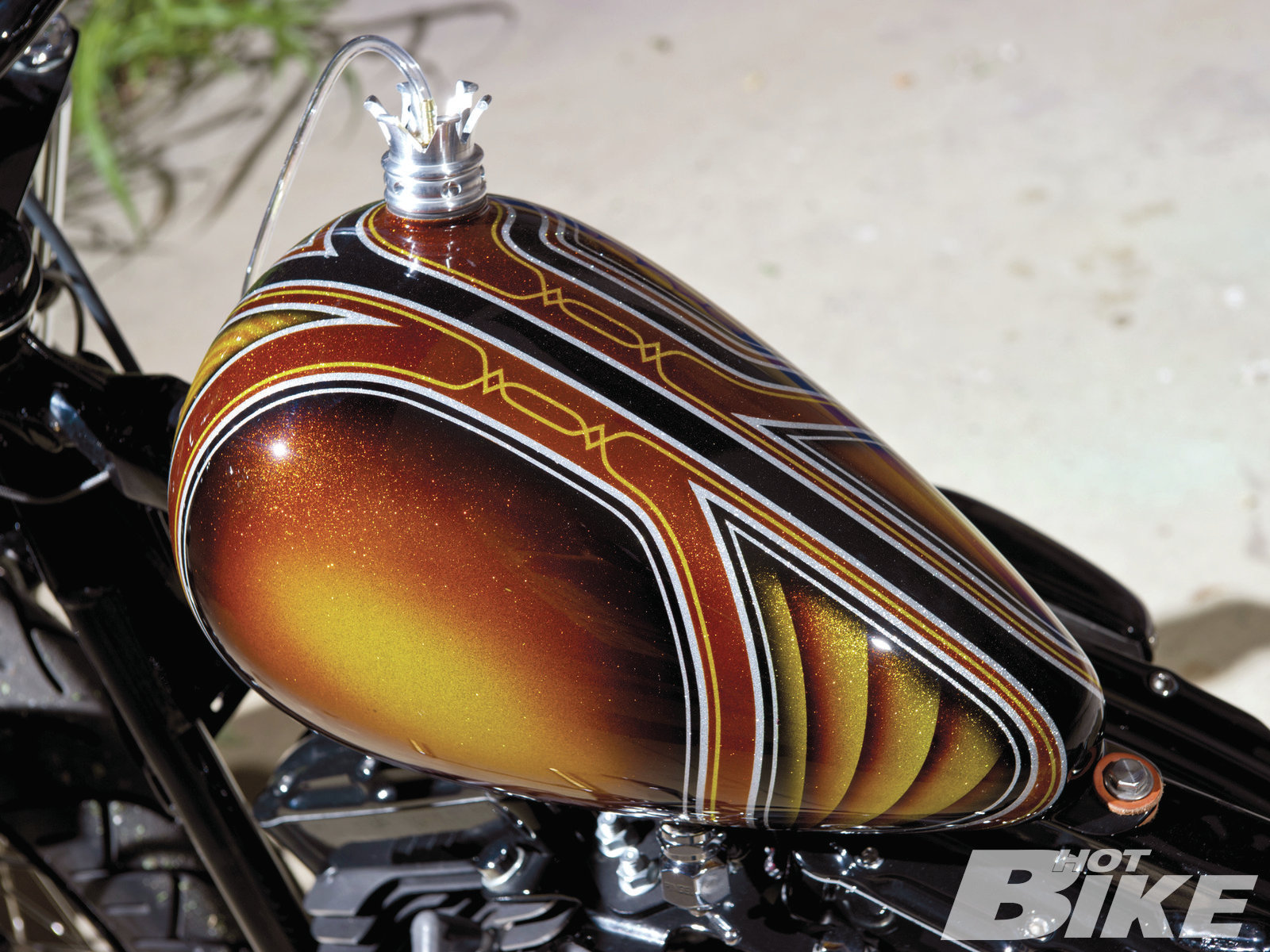 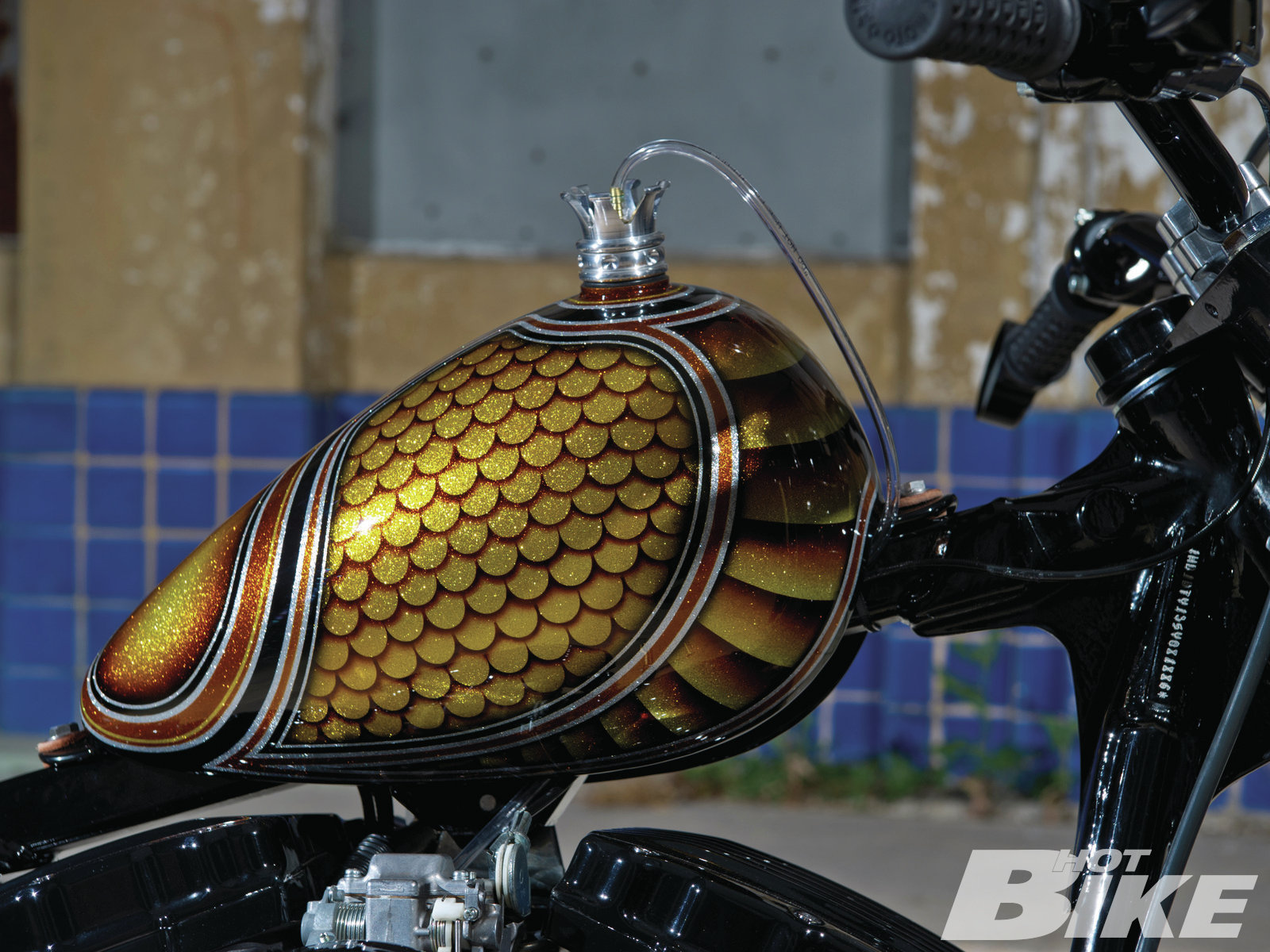 We’re never satisfied. It’s just human nature. No matter what we have or what we achieve, we’re always looking to one-up it soon after. We tell ourselves that we’re content, we’re fulfilled, dare I say…“done” with a project. Yeah, right. Well, the same goes for my buddy Scott Hoepker and his ’05 Night Train.

Scott already had what was easily the nicest custom Softail I’d ever seen. Over the years, with the help of our friend, Tom Talamantez, Scott’s bike had morphed from a bone-stock machine into a completely unique creation that would stop anybody in their tracks: rear fender kit, custom gas tank, air suspension, blacked-out wheels and frontend, the works basically. So naturally, I was quite shocked when he said it was time to take the bike in a completely different direction.

Like many of us, Scott’s taste had changed over time. The custom bikes coming out of Japan in recent years had proved to be a strong influence in the new concept he had in mind. Granted, the vast majority of those rides are vintage iron, but the overall stance and raw, in-your-face feel was something he thought might translate well onto a modern motorcycle—emphasis on “might.”

I actually had the itch to get my hands on a Softail for a while. I felt like they had tons of potential to become something unique and cool, but I really wasn’t impressed with the customized ones that I’d seen. I knew that the foundation these bikes provided could be transformed into something that people would have a hard time believing was once a factory ride. Naturally, I was thrilled to jump in head first on the project at my shop, Maindrive Cycle in Lucas, Texas.

Scott was really diggin’ those re-pop Alien gas tanks. I wasn’t. To me, Alien tanks look best on long bikes, and I really thought he was making a big mistake with his tank choice, that is, of course, until I mounted it. I could not believe how good it looked on the bike. The roundness of the tank really helped the square backbone disappear, but since the tank was a high-mount, the ugly, square-tube frame gusset was now in plain view, so out came the cutoff wheel. Once gone, I capped off the top motor mount and did a fair amount of grinding on the neck forging to make it look like it came from Milwaukee that way.

“I can honestly say that this is one of the most fun bikes I’ve ever ridden. The low seat height, aggressive riding position, and smooth but peppy B-motor all makes for a really fun package.”

Softail frames have huge integrated struts, or frame horns, at the rear for mounting the stock fender. Chopping them off is easy, but the result always sticks out like a sore thumb. I’d seen plenty of hack jobs on these in the past, and they never seemed to look quite right. I fired up the TIG welder, laid down a BUNCH of silicon bronze filler rod to the hollow channel where the struts meet the frame, and ground it all smooth. I couldn’t be happier with the result. The cherry on top was the seat pan from Redtail Leather. I use these pans on every build because they’re crazy strong and seriously comfy…even before padding. I fabricated the mounting system to keep the seat height as low as possible, for both a comfortable ride and to hide the battery box as much as possible.

Another challenge with Softails is getting the rear fender to fit the tire just right. It seems like it’s always a compromise: you’ve got to slam the rear shocks for the best look, but then end up with little-to-no suspension travel. Mounting the fender directly to the swingarm solves this problem by getting the fender close to the tire, like a rigid, and maintains this look no matter where the swingarm is in its travel. I mounted the fender to the swingarm using counter-bored-and-threaded bungs, and then made custom struts to reach over the top of the fender, which was another cool idea Scott had.

The bike already had adjustable air suspension in the rear, so it was time that the front forks got some attention, too. Four-inch-under tubes with another inch or so of internal lowering proved to be the perfect setup for the bike. It rides great, and despite the shortened fork length, doesn’t bottom out, even under full braking.

After David Goss worked over the bodywork, it was time for Scott to handle the paint. Aside from being his personal ride, the bike would also serve as a canvas to showcase the painting skills that he honed over the years painting some of the coolest lids around through his business, Backstreet Buckets. Helmets were the focus for a while, but he was now ready to take on sheetmetal work, and this killer paintjob made that known loud and clear.

I can honestly say that this is one of the most fun bikes I’ve ever ridden. The low seat height, aggressive riding position, and smooth but peppy B-motor all makes for a really fun package. Best of all, it’s got all the reliability of a modern factory machine, but looks like nothing else out there. We’re both really happy with the finished machine. Maybe, just maybe, the bike is now “done.” Maybe he’s satisfied once and for all…but I’m not holding my breath. Haha! HB

Lock Baker is a nerd. But like the coolest nerd you’ll ever meet. Not in any derogatory sense; he’s the […]

Dollars In The Details