Home » Uncategorized » Save Time And Money | Transmission Lever Swap Out 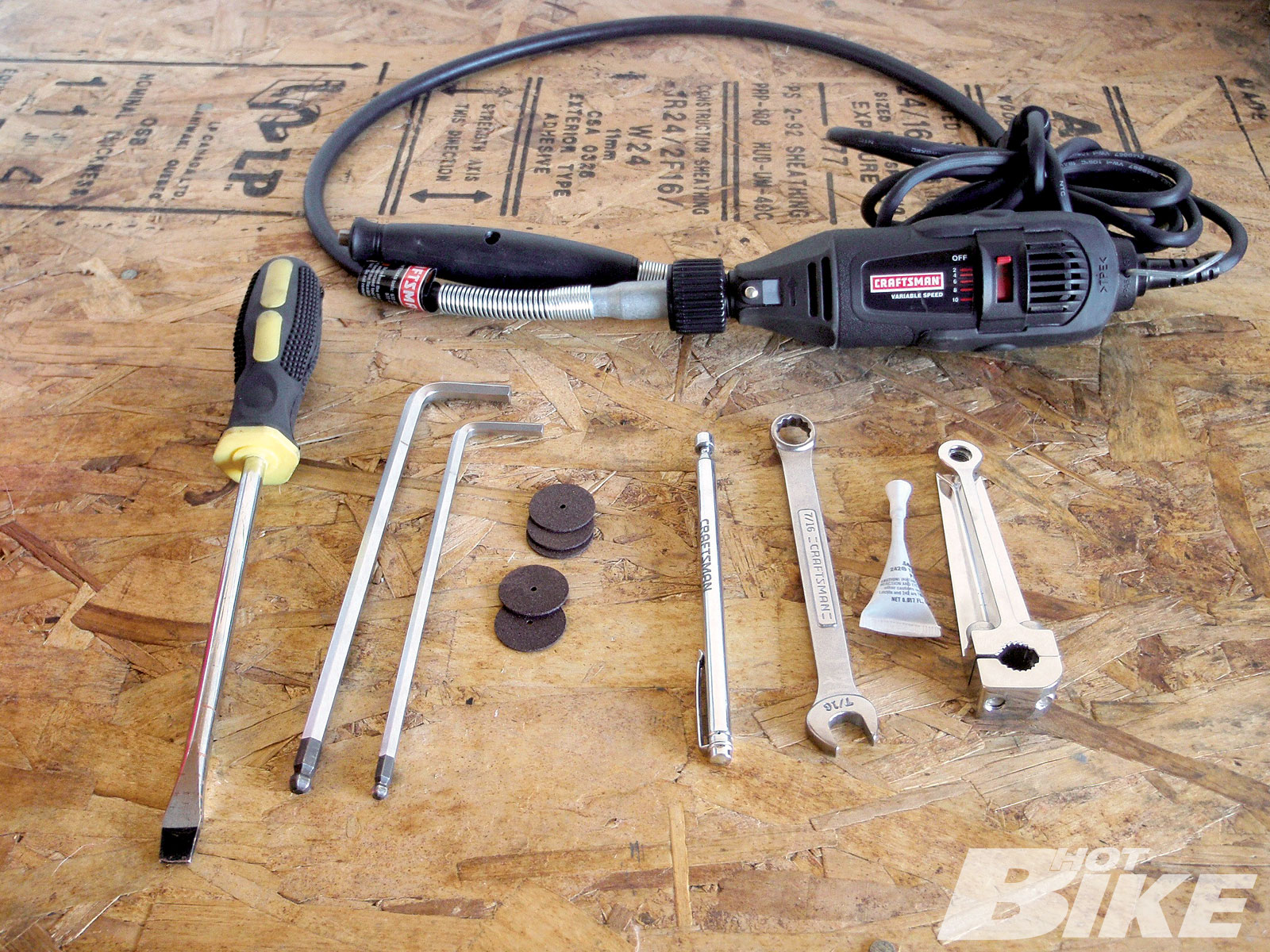 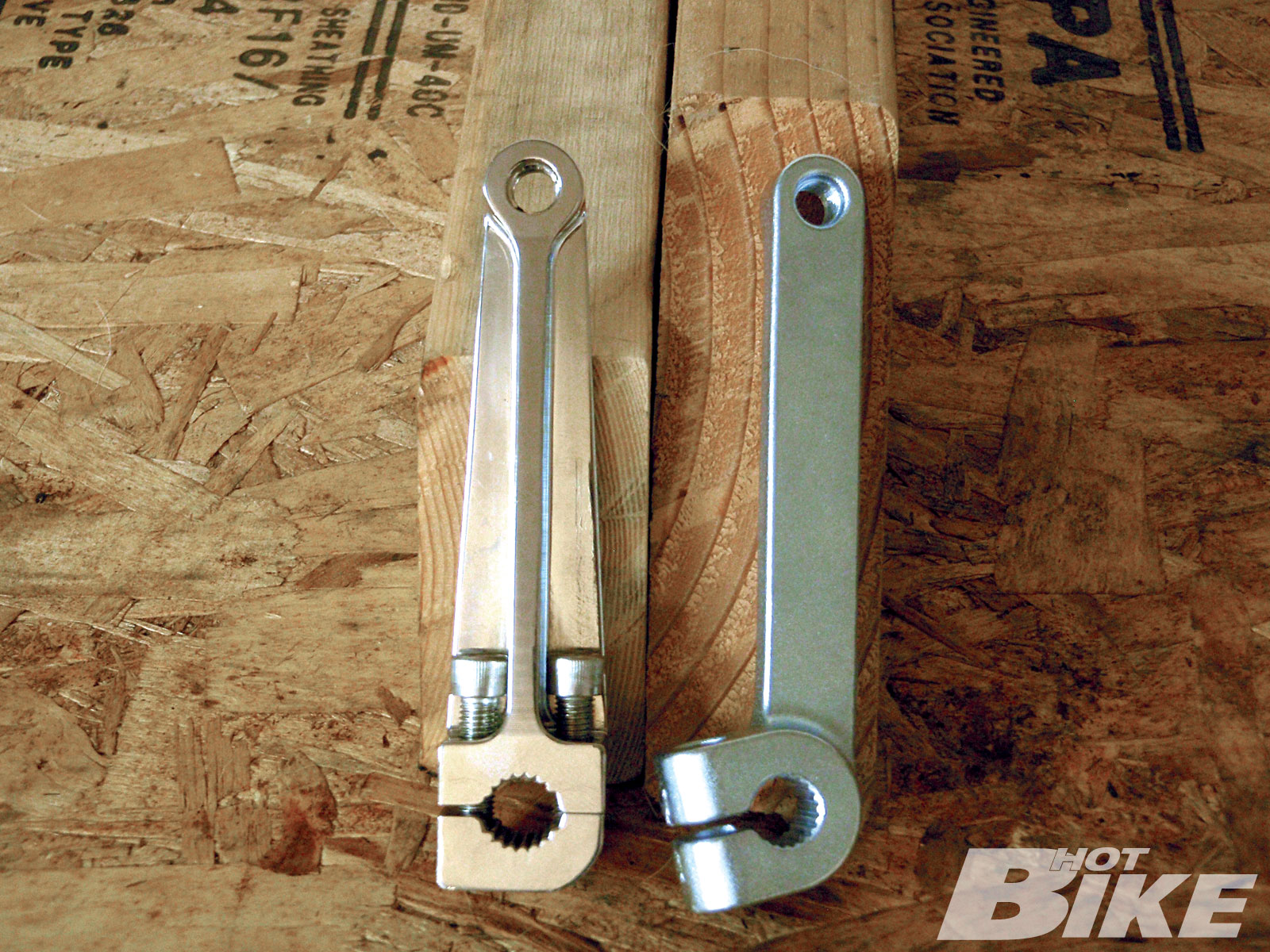 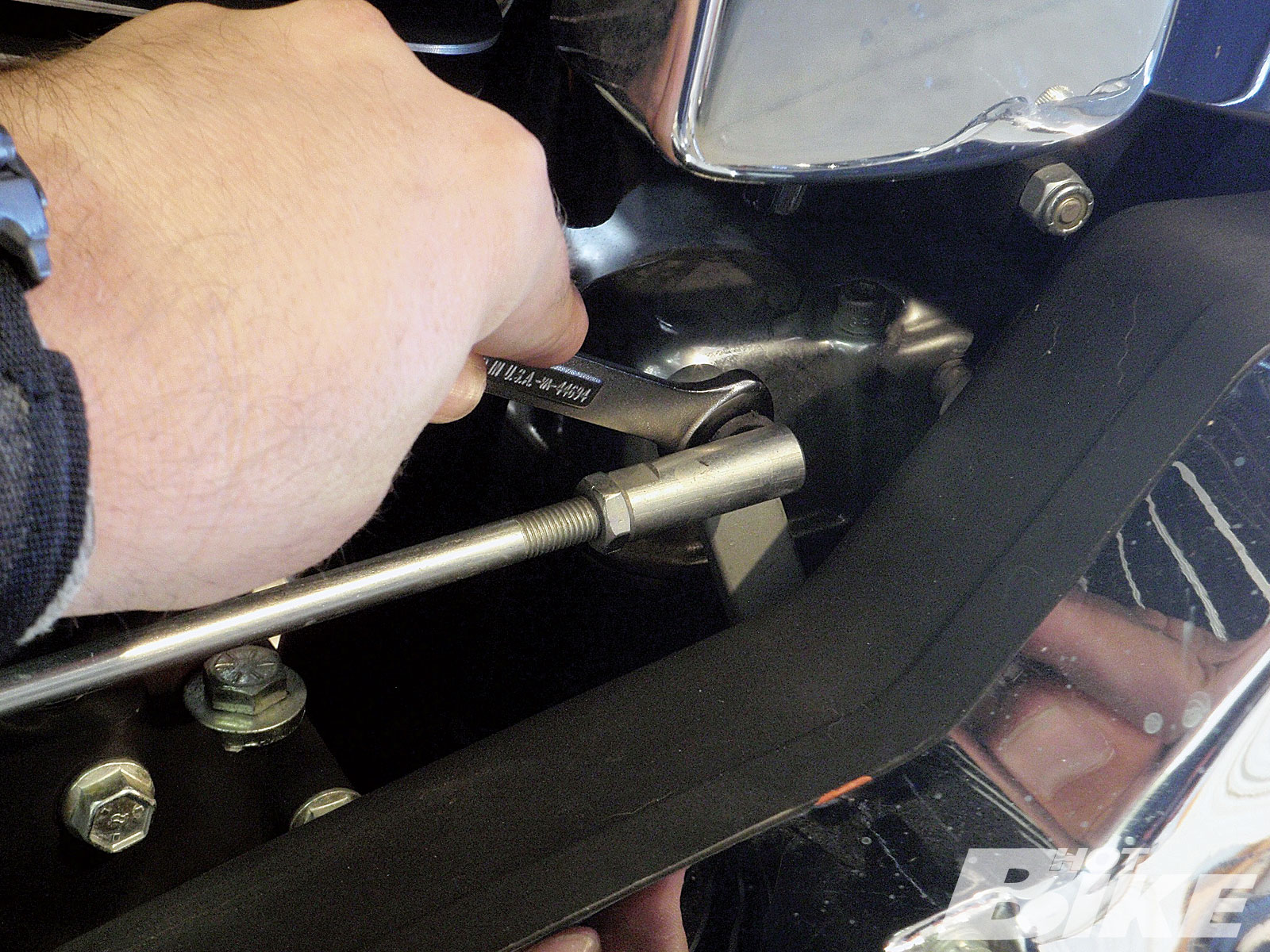 03. Basically the process involves cutting the one-piece stock lever off of the shift shaft and replacing it with the two-piece unit. The first thing we did was unbolt the rear of the shift linkage from the lever. 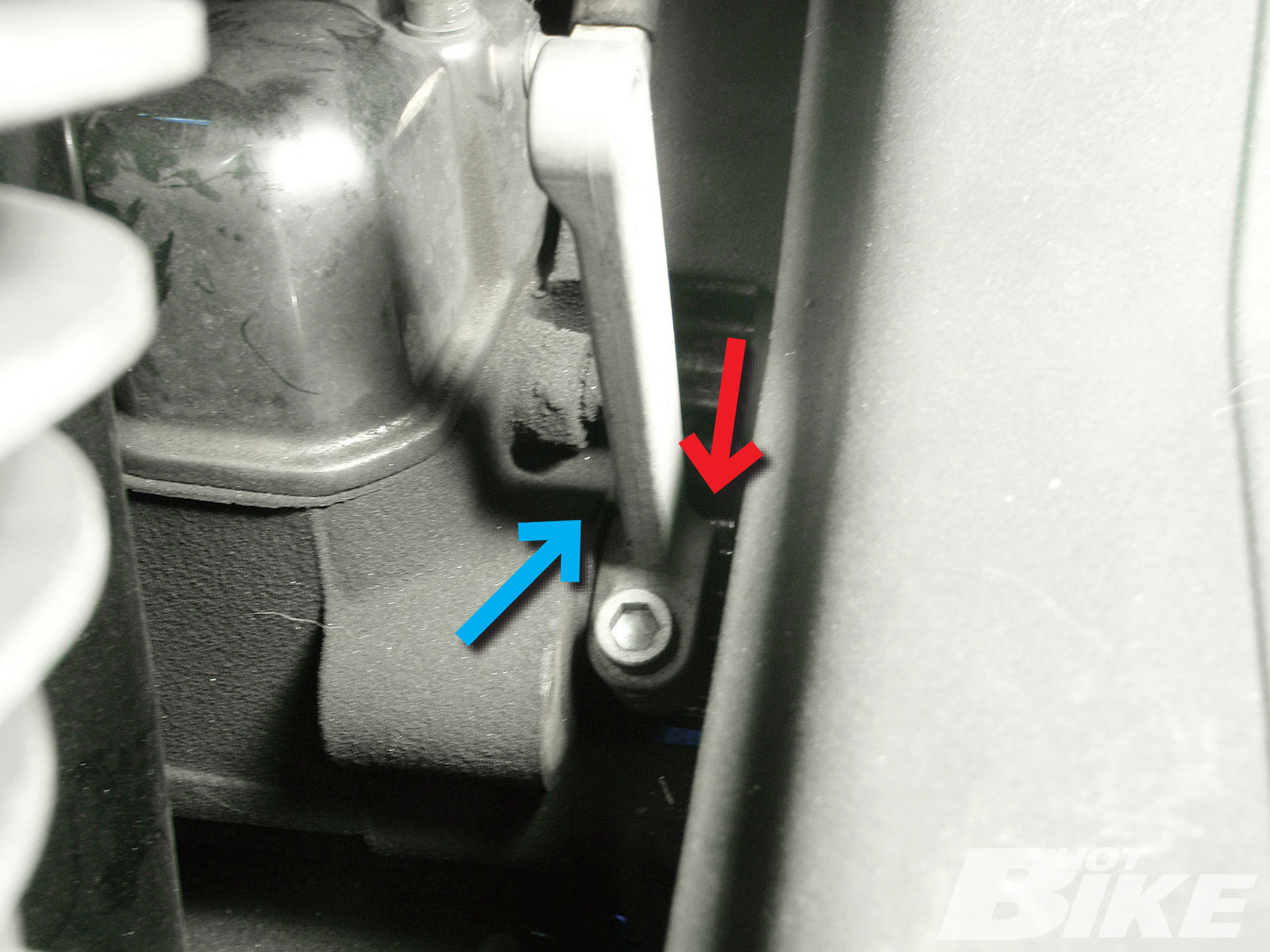 04. As you can see, there isn’t a whole lot of room to work in there. That’s where the flex shaft on the rotary tool comes in handy-it allows you to get in there and make the necessary cuts. If your lever is stripped, the cutting process might be a little easier as you should be able to rotate the lever forward giving you room to make a cut down the backside (red arrow). Our lever wasn’t stripped, so we had to cut the arm off (blue arrow) to give us more room. 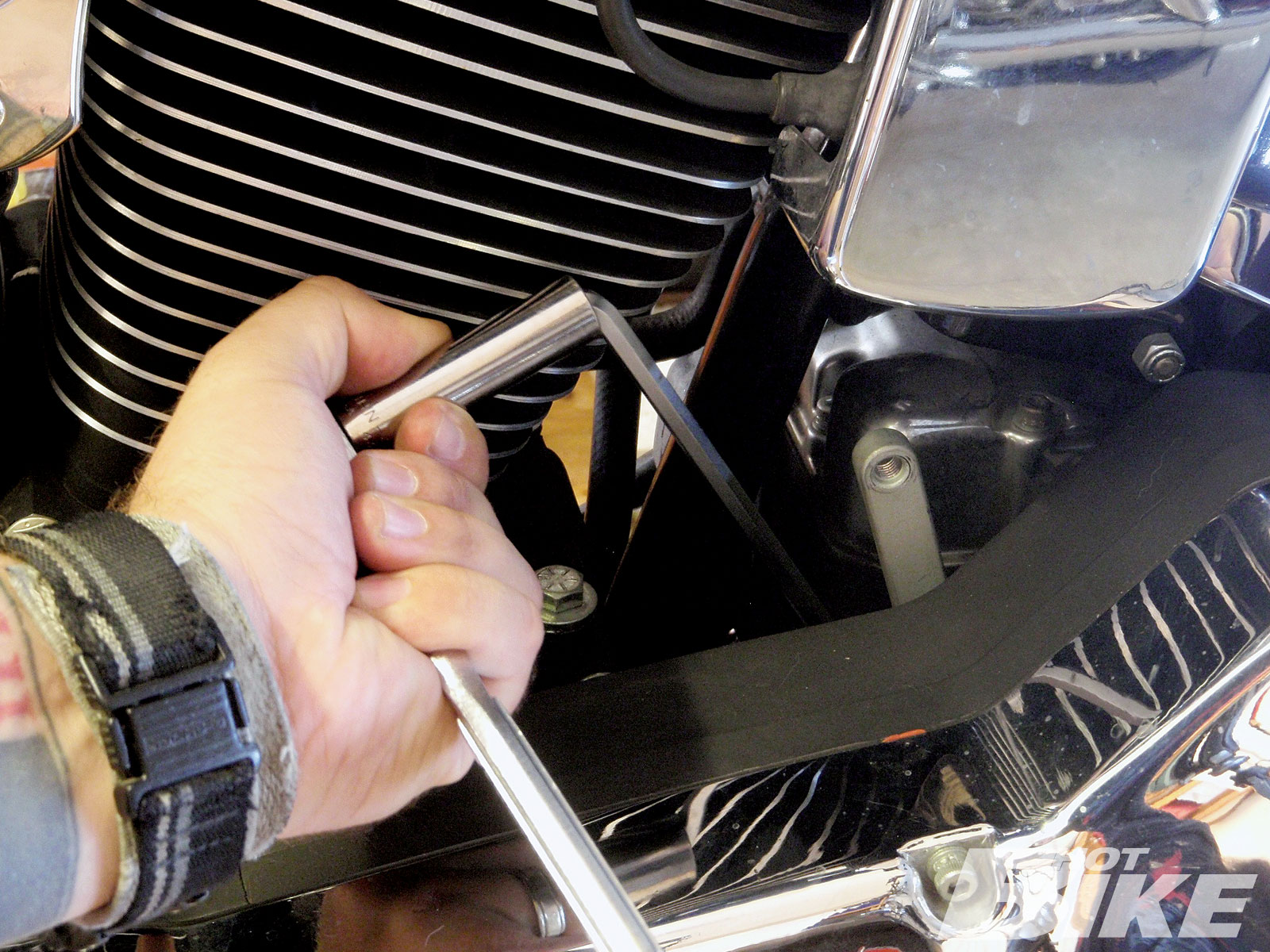 05. Before we started cutting we removed the stock bolt. We slid a skinny deep socket over the angled end of our 1/4-inch Allen wrench to give us more leverage to break the bolt loose. 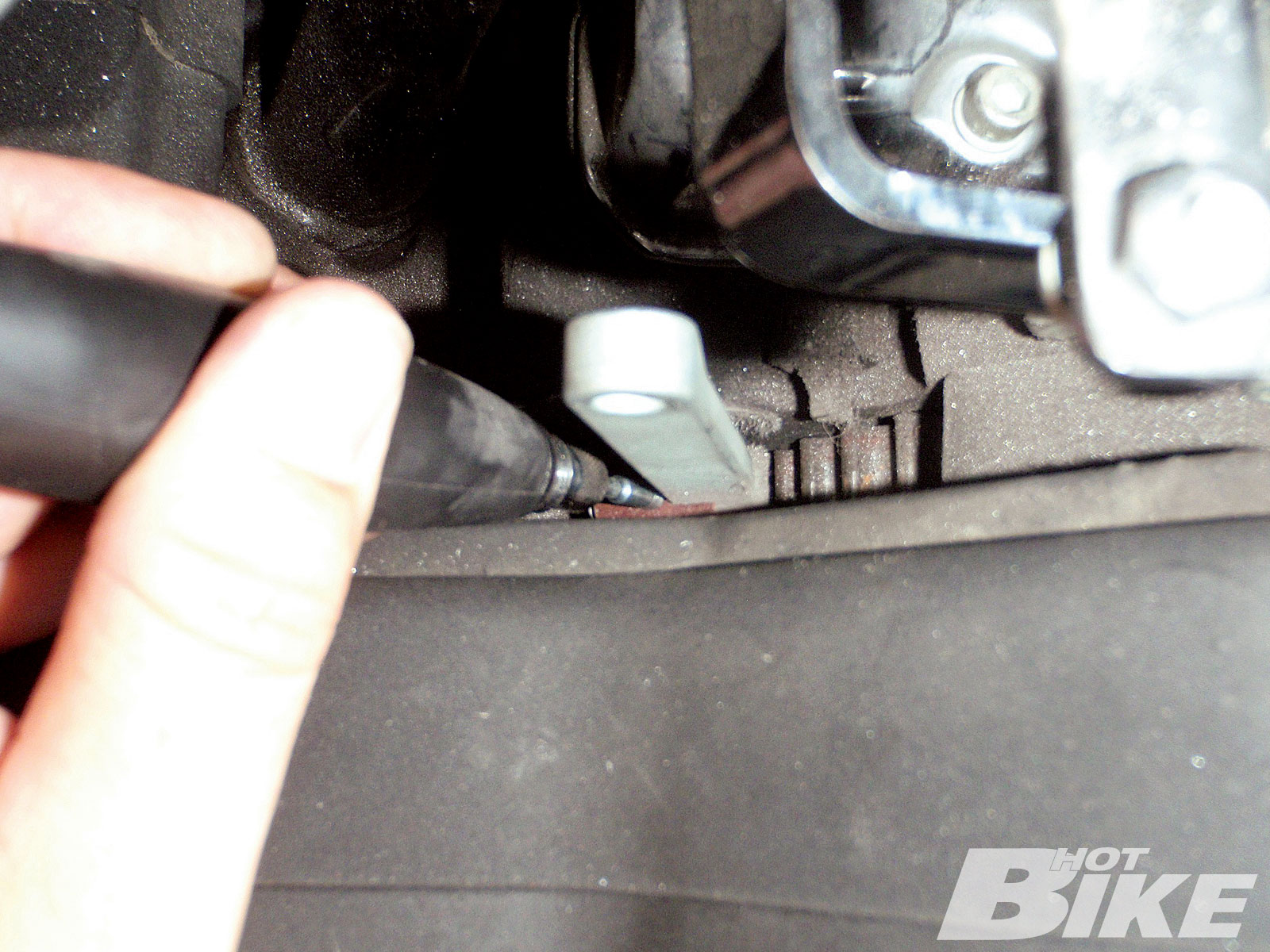 06. We then began cutting the arm off. In his video, Conrad recommended using Dremel’s 420 and/or 540 cutting wheels. The 540s are bigger and would need to be ground down to fit the tight space but can cut through much easier. Of course we only found cutting wheels labeled “heavy duty” at our local hardware store. These wheels were very thin and brittle and we burned/broke through more than a dozen of them. We would definitely advise following Conrad’s recommendations. 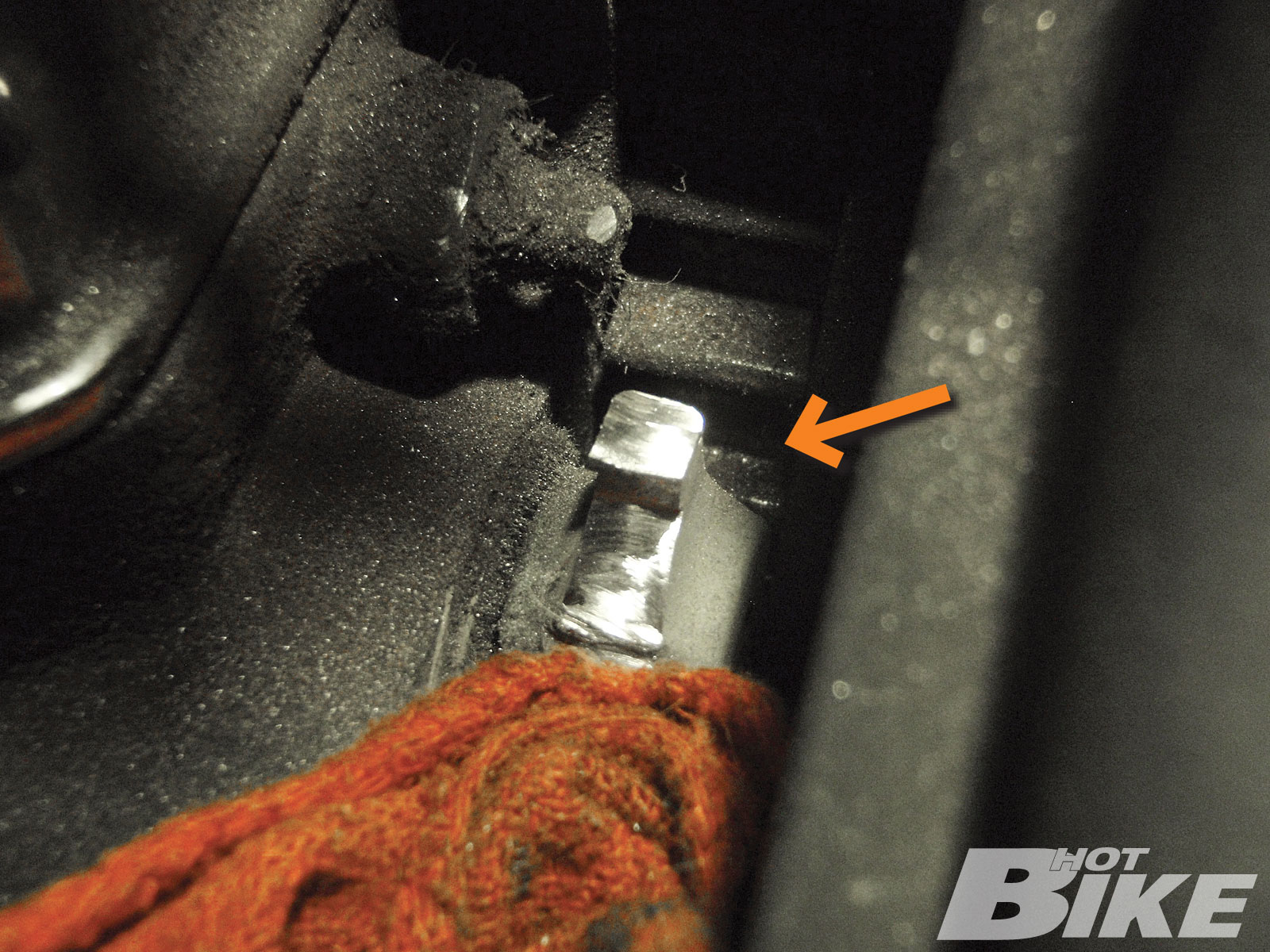 07. So here is what’s left of the lever after we cut the arm off. We then had a little bit more wiggle room to start cutting down the backside of the lever (arrow). 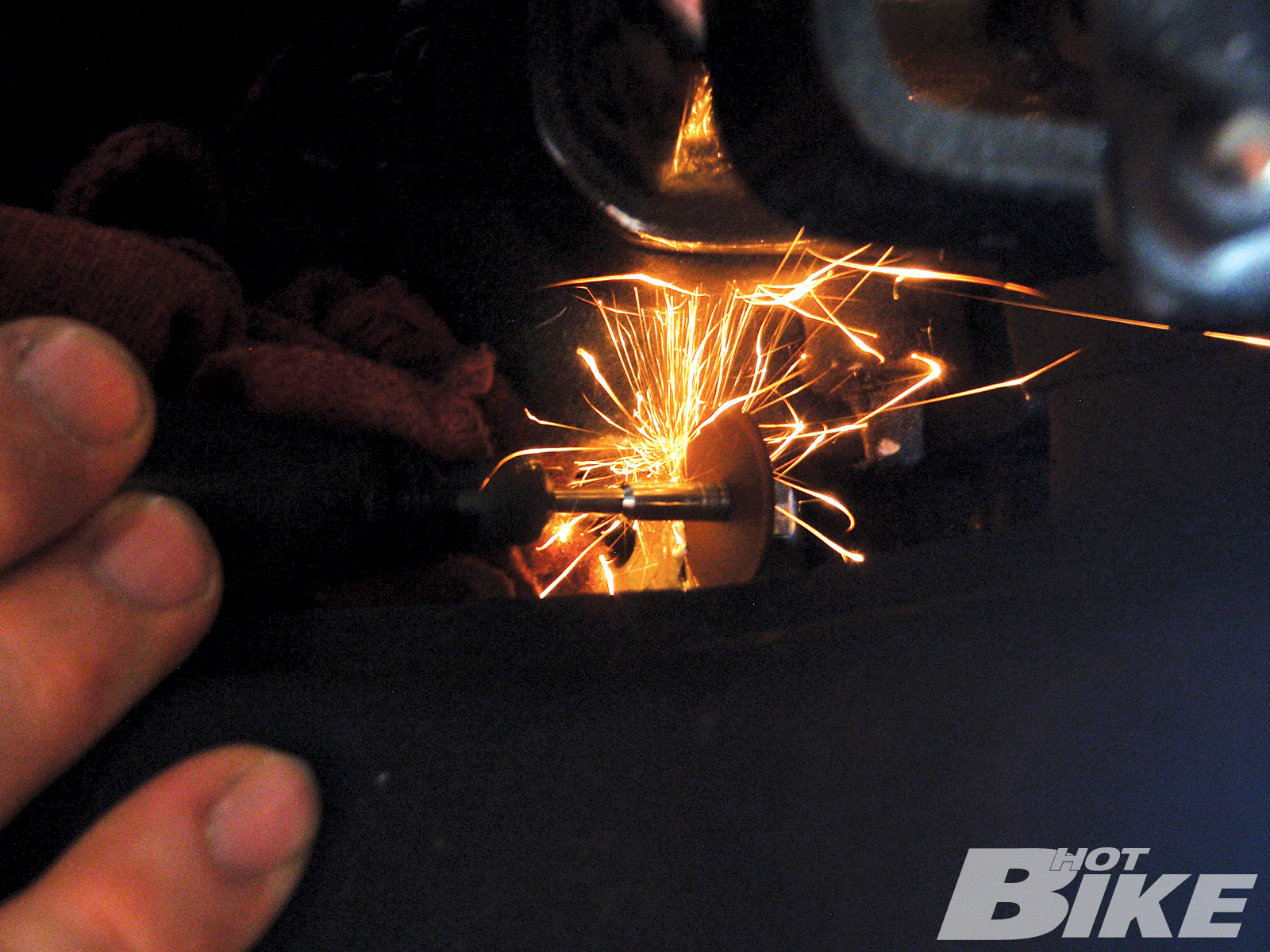 08. When cutting, our objective was to cut most of the way through and try to avoid cutting into the shift shaft as much as possible.

09. We needed to make sure to cut the complete width of the lever. So when cutting the side closest to the transmission (arrow), we used a piece of scrap wood as a wedge between the lever and the trans. Once we had cut the majority of the way through, we used the screwdriver to pry the lever apart. We also used the magnet to catch the cut-off piece of the lever.

10. We then used the magnet and our hand to remove what was left of the lever.

11. After cleaning up the area, we were ready to install the Better Lever. The lever is designed so that when installed properly it creates a clamp, as seen here. By flipping the bottom piece around, it would make a complete circle and wouldn’t create the proper clamping force.

12. To install the lever, we simply applied some red thread locker onto the bolts then installed the longer of the two mounting bolts into the hole on the backside (facing the rear wheel). We then threaded the bolt into the bottom piece a couple of turns and slipped the assembly over the shaft.

13. We then aligned the lever on the shaft and lightly tightened it up to check we had the proper throw to upshift and downshift. Next, we snugged up the rear bolt to bring the two pieces together. We then snugged up the front bolt and fully tightened the rear followed by the front. Once again, we used a socket on the Allen wrench to get a good torque on the bolts. We also re-installed the shift linkage, and we were done.

14. A testride revealed that the lever worked perfectly, and we haven’t had any issues. One of our local dealers said it does maybe one a month and it takes about three hours and costs around $500-600 to pull the primary and replace the lever with another stock unit. With the right tools (cutting wheels), it’s a pretty straightforward swap. If you do it yourself, you can definitely save a lot of money and could easliy be done in 90 minutes or less.

While a stripped transmission lever might not be a common occurrence, it can be one of the most frustrating roadside breakdowns. It’s frustrating because you have to remove and reinstall the entire primary in order to replace the lever. The reason why you have to take the primary off is that the stock lever is a single-piece design with one open end that allows the lever to pinch down on the shaft as you tighten the cinch bolt. To remove the lever, you pull the cinch bolt then slide the lever off the shaft. The only problem is that on most bikes there isn’t enough room between the end of the shaft and the inner primary to slide the lever off (we say most bikes because we’ve heard the six-speed tournig bikes have a little more room to slide the lever off, but we’ve never seen or done it). So you have to remove the primary, and replace gaskets and (sometimes) seals to install a $25 lever that, if it failed once, will most likely fail again.

Faced with this dilemma several years ago with his ’04 Road King, Conrad Buehler found that his local dealer wanted about $500 to perform the install for the $25 dollar part. Frustrated with the time it would take to do the install himself and not wanting to drop $500, Conrad knew there had to be an easier or better way to get back on the road. After cruising around his hometown of Norfolk, Virginia, Conrad found a machinist who understood his plight. In short order Conrad had a new part that was not only easier to install and didn’t require removing the primary but was also of better quality and performance. And just like that, his business, Better Lever, was born.

We ran the Better Lever in our Product Pics section a few issues back and we were very intrigued, so we called Conrad and asked him about it. He said most of his customers are bagger owners and tend to be those who use the heel-toe shifter. He said it’s just something about that heel shifter with certain guys, maybe they slam down too hard, but they seem to strip their stock levers more frequently. Conrad said the lever is machined out of stainless steel, which he then buffs to a shiny finish. He chose stainless steel because he wanted the lever to be ore durable and of better quality than the stock unit. Conrad is so confidant in his product, he said he guarantees its performance for life.

Looking through the Better Lever site, we noticed that there were two videos with Conrad showing how to remove the stock lever and install the Better Lever. After watching the videos, we were inclined to give the lever swap a shot ourselves on our ’96 Springer. So we got our hands on a Better Lever and shot the install in our home garage. Follow along as we show you how we performed the swap.

In some parts of the country guys get to ride year round. Lucky them. For many of us though when […]

Well, Perfect Bungees to be more specific. Just Ducky products sent us a few and we have been addicted to […]