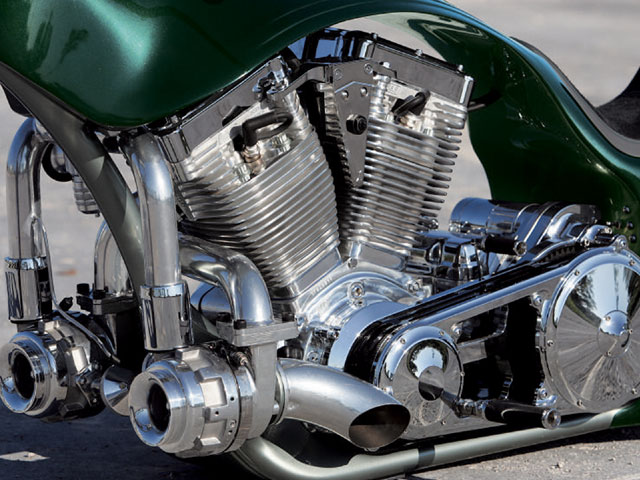 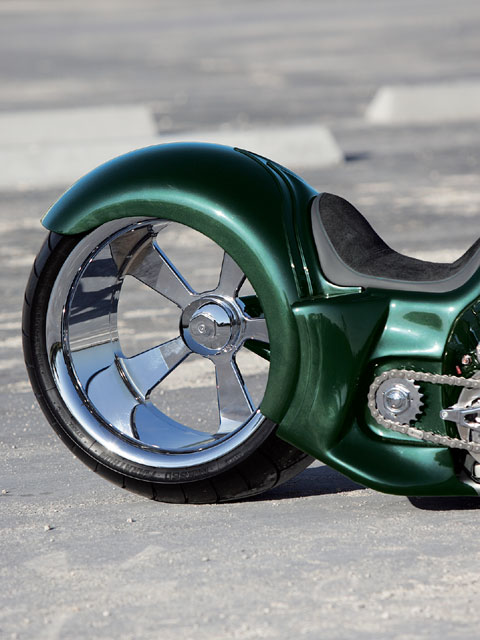 Competition is a good thing-without it, many great accomplishments would never be realized. Dating back to the beginning of time, humans have been competing against one another in wide-ranging endeavors, in everything from ruling a country to winning the affections of a woman. Other examples include the space race, landing on the moon, setting land-speed records, and the physical achievements of athletes who try to be the best of all time.

Back in 2005, Mike Pruss, owner of South Florida Choppers (SFC), a shop specializing in custom builds and located in West Palm Beach, FL, found himself losing at a bike show to a motorcycle complete with a friction drive. Now, don’t get the wrong idea-the winning bike was an impressive specimen. The only problem, according to Mike, was the fact that the winning bike was unable to depart the show under its own power. As far as Mike was concerned, that was just plain B.S., and we tend to agree, but as unhappy as he was with the way things unfolded at the show, it was just what he needed as motivation for the next show he would enter.

Mike figured a bike with a friction drive just might be what could place him at the top of the heap at the next show, but that was just the beginning of his plan. This bike needed to be over-the-top in every respect, not just one novel engineering feat-no, that just wouldn’t cut it. The bike had to have smooth, flowing lines, like none he had built before. It needed to stop the judges in their tracks as they pondered just how Mike packed all that slick engineering into such a spartan package.

With a few ideas in mind, Mike loaded up the bike and made the long trip back to the shop. The drive home had his head spinning as he brainstormed. By the time he reached the shop and dropped off the trailer, he had a laundry list of different features he thought he and the guys could incorporate into one killer motorcycle.

The next morning he rounded up his right-hand man Keith and one of his main guys, Jim, and ran some of his ideas by the two of them. They really liked the overall plan to build a custom bike, pulling out all the stops in an attempt to put this one way over the top. In addition to the friction drive, they planned on modifying a Martin Brothers Trend Kill rigid frame, transforming it into a head-turning, single-sided swingarm style (yeah, yeah, we know-it’s a rigid and doesn’t have a swingarm, but you get the idea). To give the chassis the strength it would need to deal with the stresses of the combined friction drive and single-sided design, the crew got busy, filling the rear of the frame with some serious plating to act as stiffening members. Other than removing the seat post and the usual relieving the frame of all unwanted brackets and tabs, the remainder of frame looked pretty much the way it did when SFC received it.

The next big project the boys tackled was the wheels. Mike had ordered up a set of wheels from the German wheel manufacturer, Speed Point. They arrived at the shop as raw castings. Before securing them in the CNC mill, a program needed to be written before any chips could fly. When all was said and done, a 21×3.25 and a huge 18×10.5 with a 10-inch offset built into it were screaming for a dunk in Melimar’s chrome tank.

Mike had his eye on a frontend made by Tricky Air, and this would be the perfect bike to showcase it. For those not familiar with Tricky Air’s frontends, they’re very slick. They operate like a traditional Springer frontend, but with one major difference. Instead of using springs and a standard shock absorber, cushioning and dampening are controlled by a pair of air springs, similar to the way a set of air shocks controls the ride on the back of a Softail. This also allows for raising the bike off its framerails while it’s parked. Mike ordered up a frontend complete with 3-degree trees, giving him the trail figure he was looking for. After mocking it up on the bike, Mike decided to rework the rocker assembly to change up the look just a bit.

Prior to proceeding to the friction drive, Mike wanted to line up as much of the driveline as he could. He began with a show-polished S&S; 96-inch Evo-style motor assembled at the factory in Viola, WI. From there he dropped a six-speed RSD tranny from Custom Chrome behind the motor, and then made the connection between the two with one of PM’s 2-inch open belt drives. Before proceeding further, the team would have to build the friction drive, which is made up of some shafting, a couple of main shaft gears (used to ensure the drive drum would spin in the proper direction) designed for use in a transmission, and a 6-inch solid aluminum drum that runs the width of the 300-Series rear tire, complete with a knurled outer circumference to aid in grip on the tire. All of these components were neatly packaged in a steel box and concealed in the rear of the frame. With this major chore out of the way, the SFC crew got busy on the huge amounts of work left to get the bike going. Three of the guys were working on hand-fabricating the extensive sheetmetal, which serves the dual purpose of giving the bike its smooth, flowing lines and concealing as much of the frame and components as possible.

If you look closely at the bike, a keen eye will alert you to the fact that it appears to have no brakes, yet it still has what looks like a PM Contour hydraulically operated front brake lever. Well, looks can be deceiving. The lone lever on the right side of the SFC’s 1-1/4-inch bars is actually the clutch lever, giving the rider the opportunity to reach down and back with his left hand to operate the shifter. All of the bike’s braking is controlled by a Pro Fab transmission-brake setup operated by a right-side brake pedal. Keeping the lines of the bike as clean as possible, Mike and the guys went with an Exile internal throttle and internal wiring, and stashed the air compressor, battery, regulator, and Nology Pro-Fire coils below the seat. With no room to hang the oilbag from its traditional location, one was fabricated and hung below the transmission.

Mike had one more trick up his sleeve to put the bike over the top. He figured that if the bike were turbocharged he would stand a real good chance of taking top honors at the next competition. Not knowing a whole lot about mounting turbos on a motorcycle, he turned to Steve at the Turbo Doc in Utah. After some lengthy conversations, Steve hooked up Mike with a pair of self-oiling Aero Chargers designed for use in snowmobile racing. Once in Mike’s hands, they were completely disassembled and machined wherever possible to give them a smooth, clean look. After mounting them low on the downtubes, Mike began plumbing between the engine’s exhaust ports and the turbos with some 2-inch pipe. For the outlet of the turbos, 3-inch pipe was bent at a 90-degree angle and slash-cut.

With the bike completely mocked up, it was time to tear it down and send out all the parts for polishing, plating, and some aluminum-finish Hot Shot Jet Coating for the exhaust pieces. All the extensive molding and painting was performed in-house by Chad. Mike’s color selections were rather simple. Instead of putting a wild paint job on the bike, he had Chad shoot the sheetmetal and rear frame section with Subaru’s Timberland Green, while the majority of the frame and the frontend and bars were slathered in GM’s Frost Pearl.

Since completing the bike, Mike has done very well showing it. As of this writing, his proudest achievement was finishing 12th overall in the World Championship of Bike Building, competing with the likes of guys such as Roger Goldammar, Mike Prugh, and Mark Warrick. I guess we’ll just have to wait and see where having his creation grace the cover of this month’s HOT BIKE ranks in Mike’s mind.

Recently, Ride Nice came out with a series of new 2017 Harley-Davidson products. Here’s what they had to tell us […]