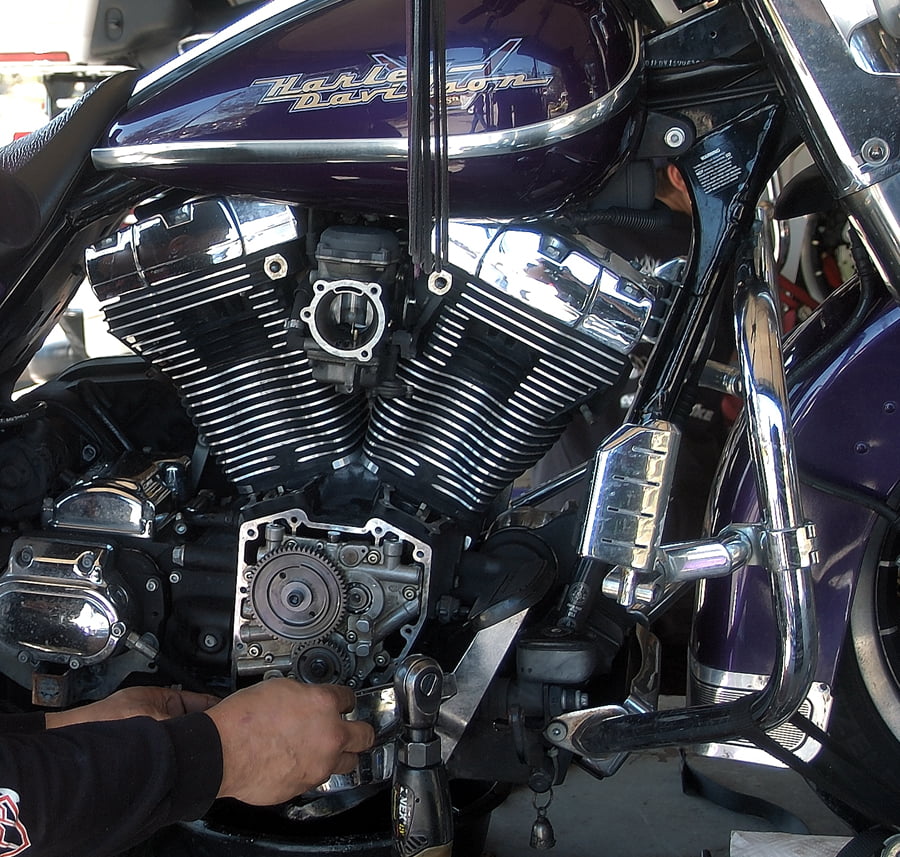 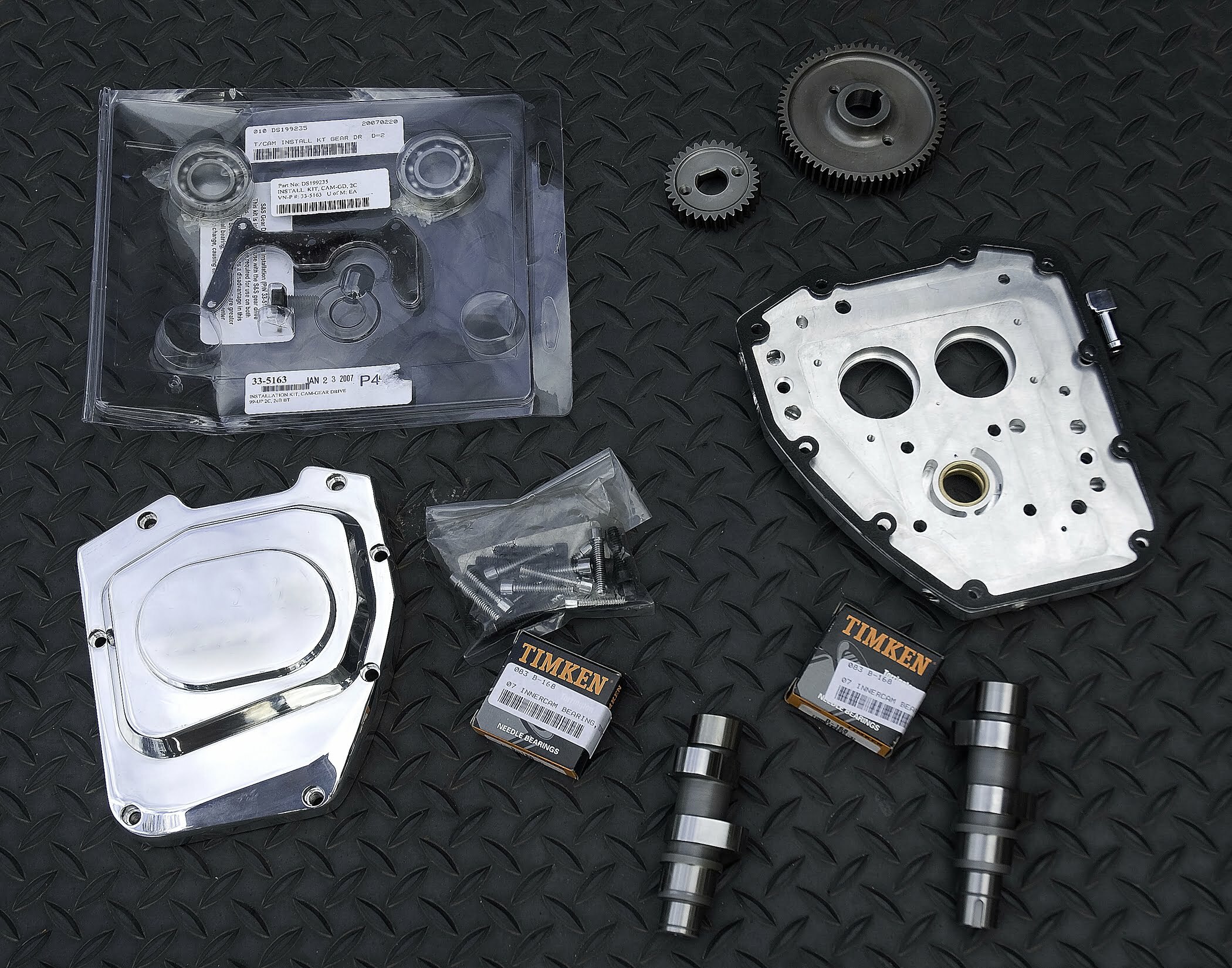 We could title this one “The Case For Cogs.” It’s all about gears, the ones driving the cams. And with cams being the obvious performance swap after pipes, filters, and a re-map the questions about gear drives abound. Should you or shouldn’t you? “Well, we routinely include a gear drive into most every cam swap we do,” answers Jamie Hanson at Speed’s Performance. “We think it’s that important.” And on the 2007-and-later engines they’ll upgrade the cam plate too. “We don’t like doing a cam swap any other way.” More on all that in a minute.

As for the cam recommendations, the ones those gears will be driving, for the earliest Twin Cams, the 88s, SPP generally goes with 510s or thereabouts. For the 96-inchers it’s usually 551s and for the 103s and 110s 585s. All chosen for their strong, hassle-free, all-around performance in an everyday ride.
For the 88s, Jamie says, .510 is about as much lift as you want. These bikes don’t have the Beehive valve springs to accommodate too much more. And a mild cam like this will generally deliver about 10 hp and 10 more pound-feet of torque, a boost that’ll be felt. “But more importantly,” Jamie goes on, “the big gain here is getting rid of those chains and their spring-loaded nylon tensioners and replacing them with gears. On these engines that’s a major consideration.” Moving up to a 96 the SPP recommendation is generally a 551 cam. “It builds power from off idle to right around 4,000 rpm,” is the reasoning. “With lots of torque for a bagger or someone who rides two-up. It’s great from stoplight to stoplight, for climbing hills, and passing on the highway.” And for the newer 103s S&S has a cam kit called the MR103, a .585. It’s been the SPP pick for a while. That MR103 is particularly nice in the later engines, Jamie says, not only because those motors have the Beehive valve springs to accommodate higher lift but because S&S has cleverly set the timing and duration here for a strong bottom end, a great mid-range and no sacrifice at the top-end.

“It’s a great all-around choice,” Jamie says, “and it works in both the 103s and the 110s.” Significantly, all these cams, 510s, 551s, and those MR103s, are designed to work with stock heads and stock compression and they all have gentle ramps that neither snap the valves open or slam them shut, both of which can play havoc on valve-train life.

Now, back to that case for cogs. As mentioned, on a TC 88s it’s a no-brainer. Those spring tensioners on the OE chains have so much drag they’re a horsepower thief, Jamie explains. But more importantly, with all that tension their nylon pads wear out quickly, quicker even than the hydraulic tensioners Harley replaced them with. So on an 88 a gear drive is almost a must, and the crankshaft runout on those older bikes is rarely, if ever, a problem. Which brings up that gear-drive bugaboo, crankshaft runout, and its effect on a gear-drive installation. And information here, Jamie explains, can be misleading. Granted, The Motor Company has gotten a bit liberal on how much runout it allows, but how much is too much for a gear drive? “S&S recommends .003 or less for their gear drive installations,” Jamie goes on, “and that’s fine. That’s the optimum. But having said that, we’ve done gear drive installations where there’s been .006, even .007, runout and feel comfortable about it. We have customers with tens of thousands of miles on their gear drives, and—believe me—not all of them had that .003 runout or less.”

How’s that possible? When setting up a gear drive SPP will pay special attention to the backlash on the outer two gears, adjusting it with undersize or oversize pinion gears so it’s neither too tight nor too loose. They’ll shoot for .005. “You’ll get gear whine on one extreme, too tight,” Jamie explains, “or gear knocking on the other, too loose.” For the record, the average crankshaft runout SPP sees on 2007 and later bikes is .004 to .005.

After pipes, filters and re-mapping cams usually come next. And as the techs at Speed’s Performance Plus see it, with a gear drive spinning them. Next time that big, black SPP mobile speed shop is in your area stop by for a chat, or just give the guys a call. “With gears you’re virtually bullet proofing the bottom end,” Jamie concludes. “And once they’re in you’re done. No need to go into that cam chest ever again.”

Who: Ed Hardy Helmets By Christian Audigier What: Motorcycle Helmets Wear: Best known for his bright and colorful tattoo designs, […]

“Mmm…Nothing says fall like the taste of a yummy pumpkin spice latte.” Things your ol’ lady might say on October […]