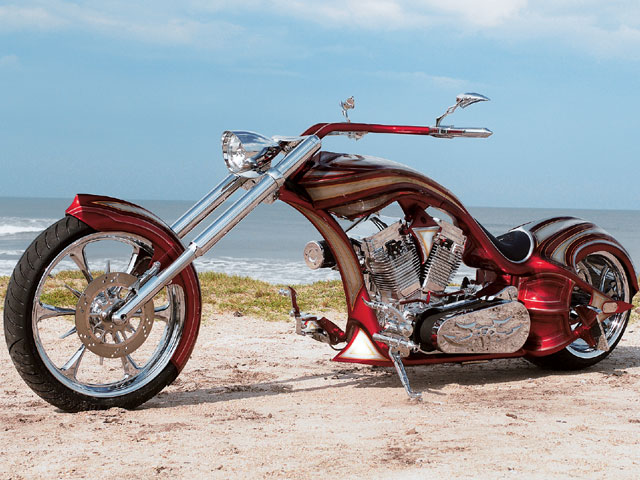 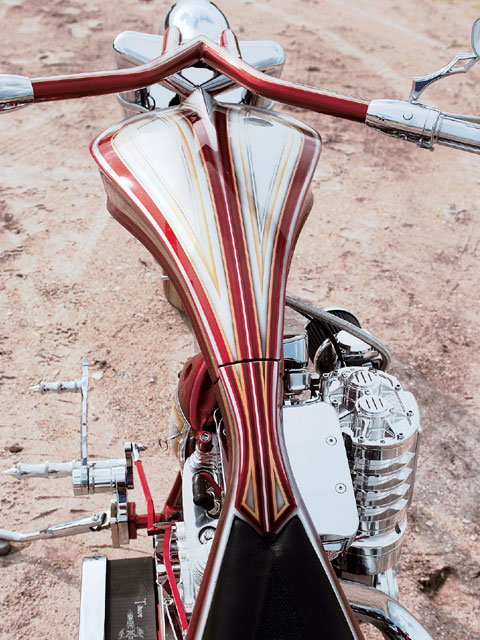 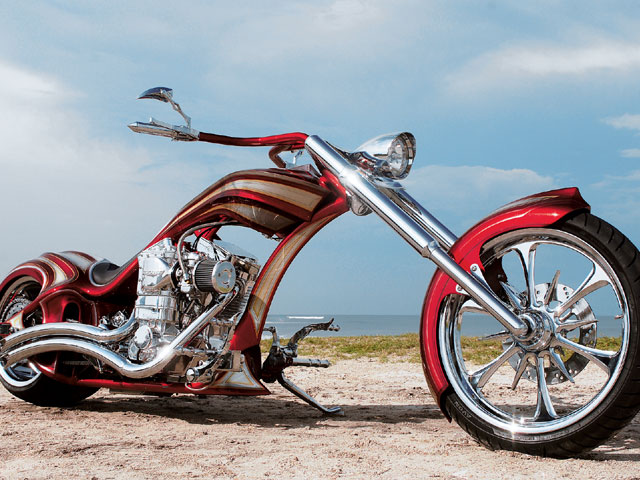 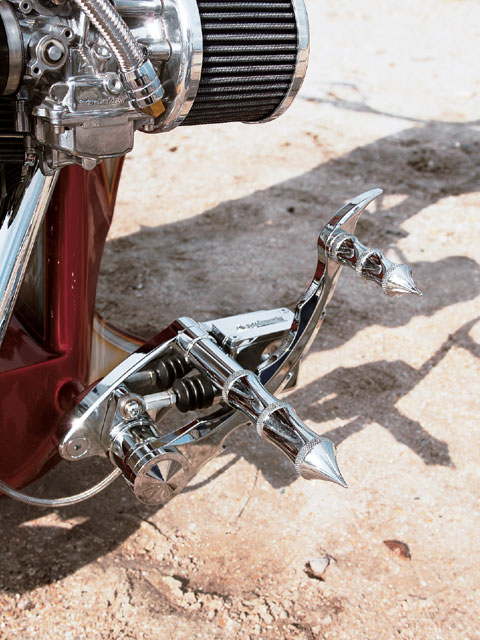 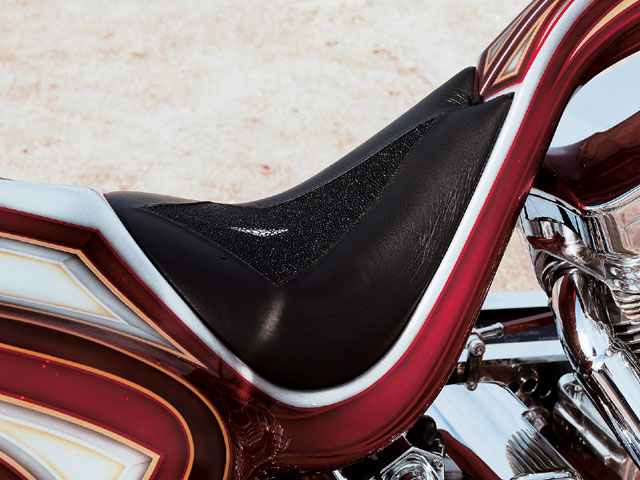 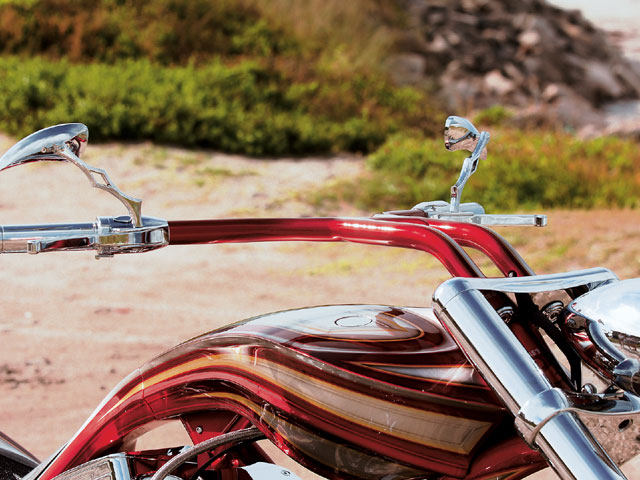 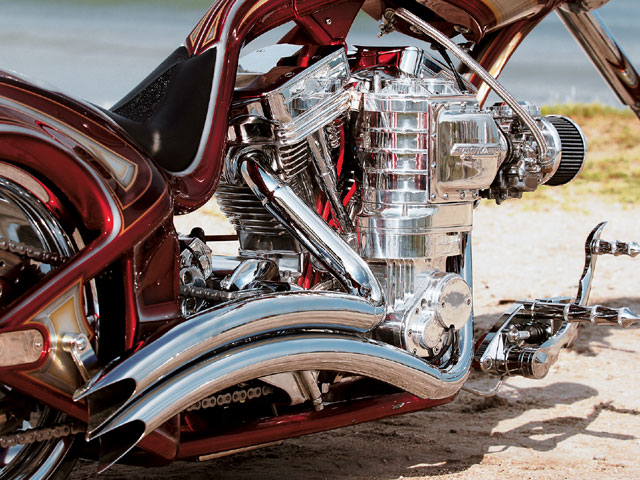 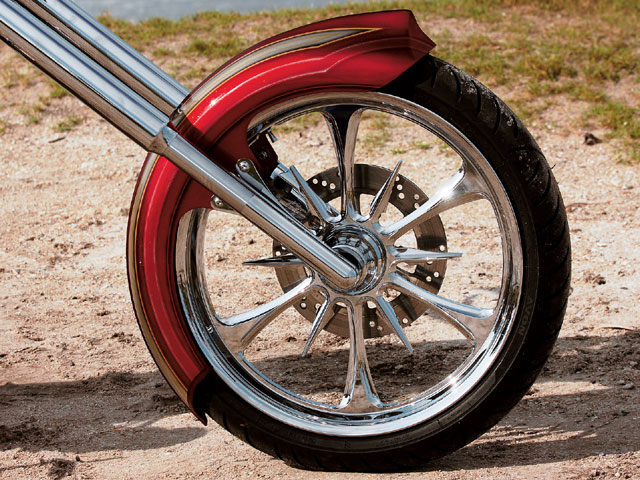 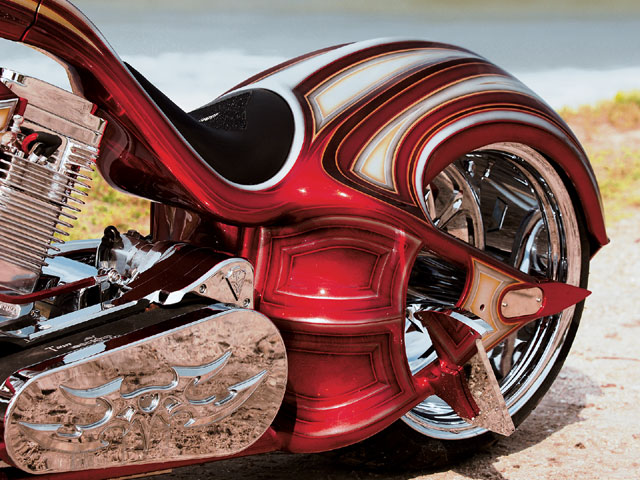 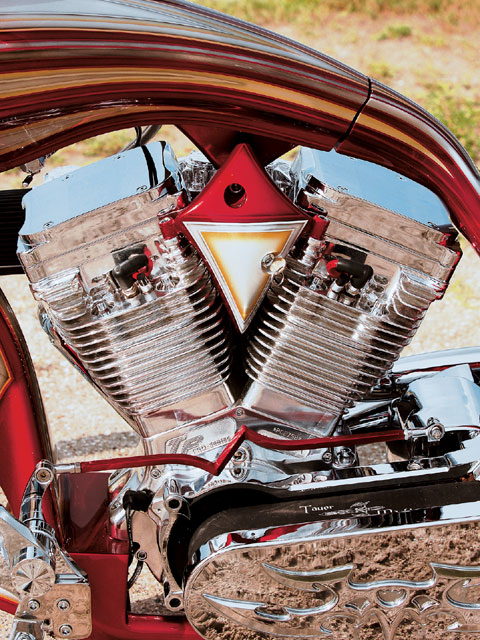 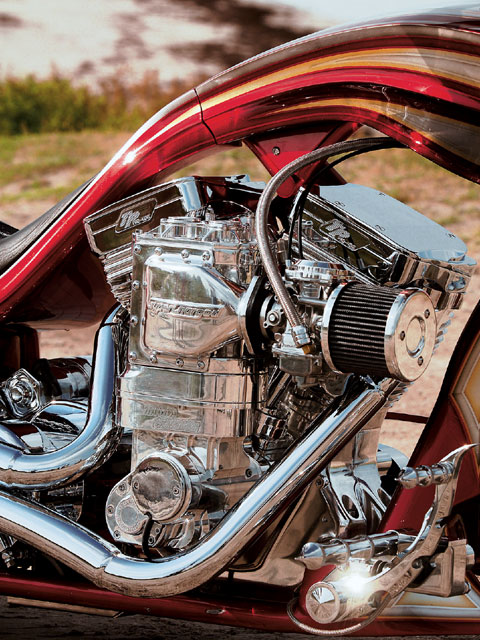 This is a story that began with a long and arduous struggle to get to the bike you see here. At first, it was just your standard build situation-a guy named Terry Brown found a shop that built the kind of bikes he really liked, and he just had to have one for himself. When it came time to pick the bike up, not only was it not what he had asked for appearance-wise, but the bike didn’t even fit him physically. When Terry asked about changing a few things to help the bike fit him better, he was told, “This is the way we build bikes. If you aren’t happy with it, sell it and start all over again.” Taking the builder up on his initial suggestion, Terry did what he could to sell the bike without having taken it out for a ride even once.

The sad tale doesn’t end there. Terry found another shop, and this one screwed him over for both time and money. He was promised that the bike would be delivered to the ’04 Daytona Biketoberfest. Well, Biketoberfest came and went, but his bike never showed up. After returning home severely frustrated, Terry was about to give up on his dream of having a custom-built bike, but he made one last attempt to find yet another shop. He checked the only place where he’d had some luck in the past with bikes-Ebay. Terry started a search with a price and proximity range closer to his home. He noticed a bike he really liked built by a shop called Coast 2 Coast Choppers (C2C) in Orlando, FL. He found his way to the the company’s website and discovered that the shop offered everything he was looking for. Terry made several calls to C2C and, after an involved discussion with owners Steve and Jeremy, Terry decided to go see them. He explained that this would be his third and final attempt to build a custom.

Terry and his wife toured the C2C shop, and both were very impressed with the facility and the level of custom bikes the company had on its lifts. Terry spent several hours looking over all the bikes in the shop and discussing the look he was trying to achieve. After a couple more visits to the shop and several phone conversations, the team at C2C started sketching different designs for Terry. Shane Judd, C2C’s in-house artist, took great care in refining his drawings until he had finally designed the bike that Terry wanted.

The frame used was a long and low Brighton Bike Works hardtail with 45 degrees of rake and 12 inches added to the backbone. A 6-inch-over, inverted American Suspension frontend with 6-degree raked trees was bolted to the neck to push the 21-inch RC Components wheel way out front. Bringing up the rear of the bike, the C2C crew slid a massive 17×12-inch RC Components wheel between the framerails. Both wheels were wrapped in Avon tires, with the rear running a stunning 330mm tire.

Terry wanted to make up for the time he lost being bikeless for so long, so power and speed were to be the heart of this bike. Jimi Hell and Dick Dover took a 121ci TP powerplant and added a Magna Supercharger, along with a set of sweeping pipes that matched the flowing lines of the frame. To assist in trying to rip apart the fat Avon tire out back, a Baker six-speed transmission and Tauer Machine 3-inch open belt primary were installed to finish off the driveline.

All the sheetmetal work was handled by Matt Mihm in-house. He was told to blend all the lines from front to back, and he did just that. He started the work up front with the gas tank forming the sides and top to flow toward the back of the bike, narrowing as it approached the seat pocket and practically blending into the rear fender as if it were one long piece of sheetmetal. The front fender was shaped with a ribbed section formed up in the front center. Then, as it wrapped around the back of the tire, the ribbed section gradually became less prominent. When the sheetmetal work was complete, it was turned over to Angel Sandoval at Xtreme Kustom Paint Works, where a custom mix of Candy Red, Silver, and Gold brought the sheetmetal to life.

Sixteen weeks after Terry started the project with C2C, he arrived at the shop to see his new custom bike for the first time. After several minutes of silence, Terry stated, “There are very few things in life that exceed your expectations. This bike is far better than I ever imagined. It was worth the wait.”

On a side note to all the bad luck that Terry had with getting this bike built, there is some good news. It just so happens that when Terry was at the shop to pick up his bike, ESPN had a film crew at C2C filming for the channel’s custom motorcycle show, Chopper Nation. The episode aired November 3, 2005, on ESPN2, showing coverage of the C2C shop and featuring several shots of Terry’s bike. It also happens that while the film crew was there we had one of our freelance photographers in the shop to shoot Terry’s bike for this feature. So not only did Terry get to see his bike on TV, but now he gets to see it on the pages of his favorite motorcycle magazine. We won’t say which he liked better.

Since completing this bike, the C2C team has started on another project with Terry on a Softail platform. In the end, Terry got exactly what he asked for and quite a bit more-and he made some new friends for life along the way. Although Coast 2 Coast may not be the biggest shop in the country, the team there is building some of the cleanest bikes on the planet.

Your Bike’s Health – From The Editor

No matter how well we take care of our motorcycles-learn their nuances and spend countless hours cleaning filters, changing fluids, […]

Tech Questions And Answers – Speak Up