The 13th Edition Of Biketoberfest 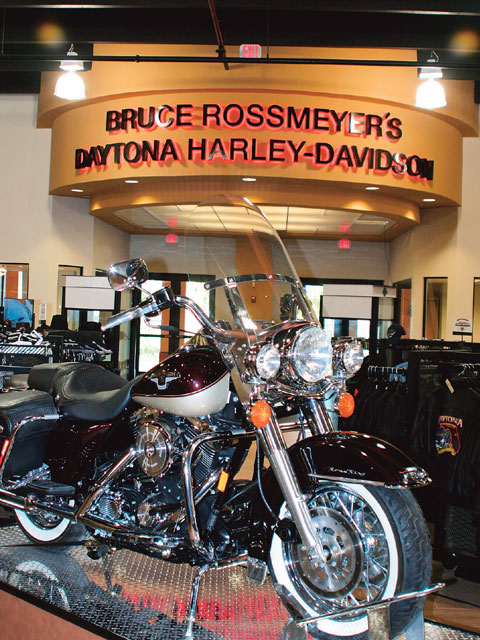 Motorcyclists who crave that one last ride, rally, or getaway or who just need something to do before storing their bikes away for winter won’t want to miss Daytona Beach’s Biketoberfest. It’s a motorcycle rally that offers riders a weekend brimming with plenty of sun, beaches, chrome-filled bikes, hot women, and fun. This past year’s event took place October 19-23, 2005, at locations throughout the Daytona Beach area. Biketoberfest is known for being a good time with lots of hot spots-and this year was no different.

There was one thing that put a little kink in the party atmosphere: the weather. When we arrived on Wednesday evening, we found that the traffic was light and the street vendors thin. We even found a few hotels with vacancy signs up. We all wanted to blame the weather. A historic hurricane season was in full swing, and the name that thinned out the crowd was Katrina; she put a damper on the spirit of the event, but with Wilma just hanging out over Cancun and on her way north, everyone in Daytona was on stand-by. A few guys we talked to didn’t even put out their displays or hang the awnings from their trucks. The week started out with temperatures in the low 90s with 200 percent humidity (OK, not really, but it felt like it) and talk of lots of rain on the way. But it was as if Wilma didn’t want to be the party crasher, so she waited ’til Sunday night to show up and start dropping rain. Luckily, by then everyone was ready to head home.

As we made our way down Main Street, it was hard to tell that the crowd was thin, because the street and all the bars were filled with folks looking for a way to escape the heat, find a cold drink, and kick back a bit. It was when we crossed over the bridge to Beach Street that we could tell the crowd was thin. Most people figured it was due to the grand opening of the new 109,000-square-foot Harley-Davidson dealership called Destination Daytona, located out on I-95 just up from the Broken Spoke. This was definitely the new hot spot; the dealership has everything a bike enthusiast could want and is still growing. In the parking lot there were more than 100 top vendors such as RC Components, Pro-One, Kendall Johnson Customs, Denver’s Choppers, Rolling Thunder, PM, and Drag Specialties, along with Billy Lane’s “Blood, Sweat, and Gears” tour. There was also the Hard Rock Seminole Roadhouse Tour at the new H-D dealership with all the Hard Rock bikes on display. Johnny Chop, Roland Sands, Jesse Rooke, and Doug Keim were on hand, signing autographs, taking photos, and giving how-to pointers on building bikes. If the bikes weren’t enough to look at, the Hard Rock models and beautiful Hawaiian Tropic girls were on hand for photos and hugs. Destination Daytona has lots of room to grow; we can’t wait to see just how much more of the property they will have developed by spring.

The world-famous Daytona International Speedway was host to a ton of vendors, food, and live entertainment, as well as demo rides from top manufacturers such as Harley-Davidson, Buell, and Victory. After the sun went down, the temperature of Daytona stayed hot, with all the bars and nightclubs serving up cold beer and hot food.

The nightlife was hot, and anywhere you headed you could find something to do-places such as The Broken Spoke with its live music, or Froggy’s with all its go-go dancers and shot girls.

By late Saturday night Wilma still had not crashed the party at Daytona, but the rain clouds were on their way and started to leak by Sunday. We know how tough Florida people are, and no doubt everything will be ready to go by the time Bike Week rolls around this spring. It looks as if the event is going to be held March 2-12, 2006, so book your rooms now at www.officialbikeweek.com, or you’ll miss the party.

Join the Sturgis Ride That Rocks!

Sturgis, SD (January 26, 2011) The Sturgis Buffalo Chip® presents one of the Sturgis Rally’s most anticipated and charitable traditions, […]

Any faithful reader of HOT BIKE magazine undoubtedly has heard of Matt Hotch, one of the motorcycle industry’s most famous […]

If you’d told Jim Tinnin 10 years ago that he’d be creating custom parts for Harley baggers, he might have […]