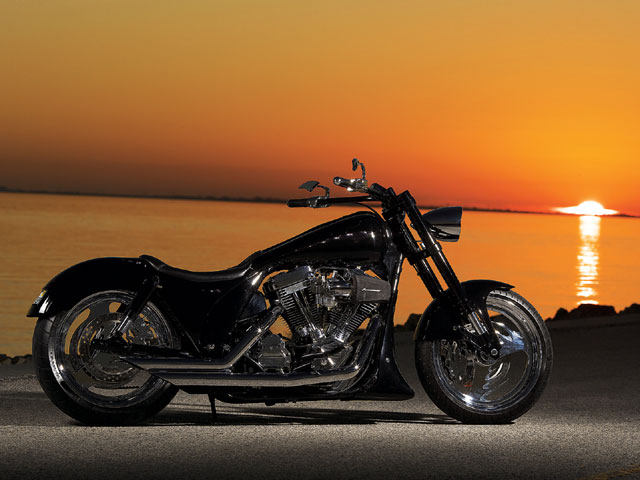 We didn’t know who the WP on the spec sheet is, but Jim does, and since it’s his bike, that’s all that matters: “WP is a European company that makes this sport-style frontend kit that comes with the fender.” 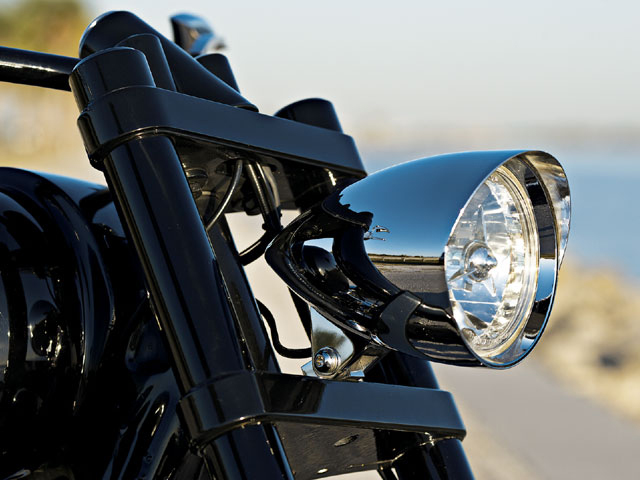 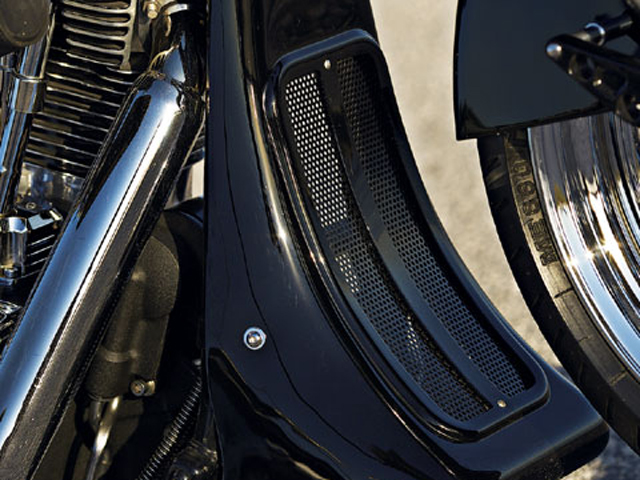 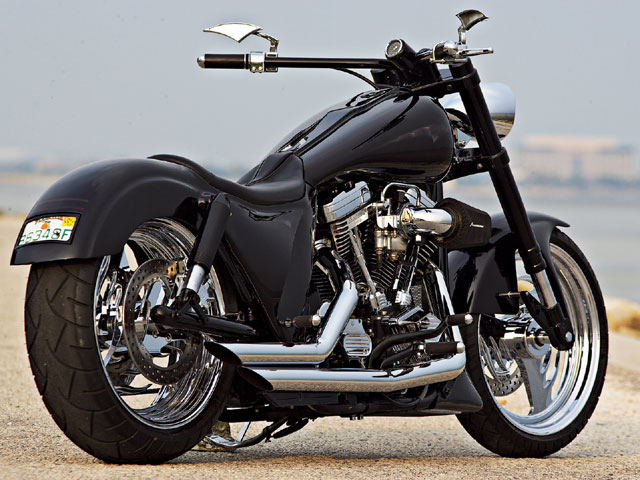 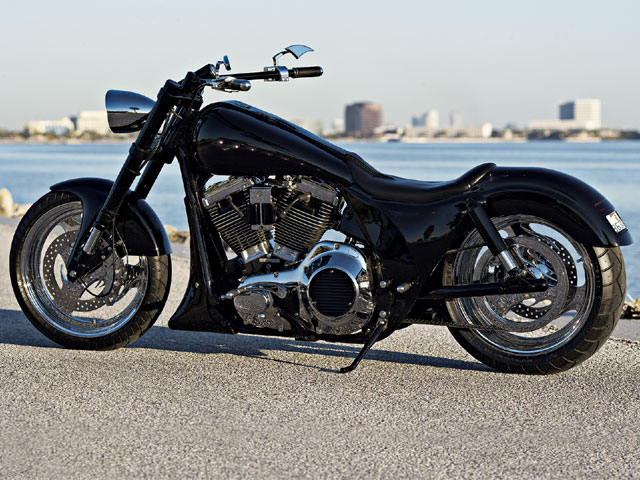 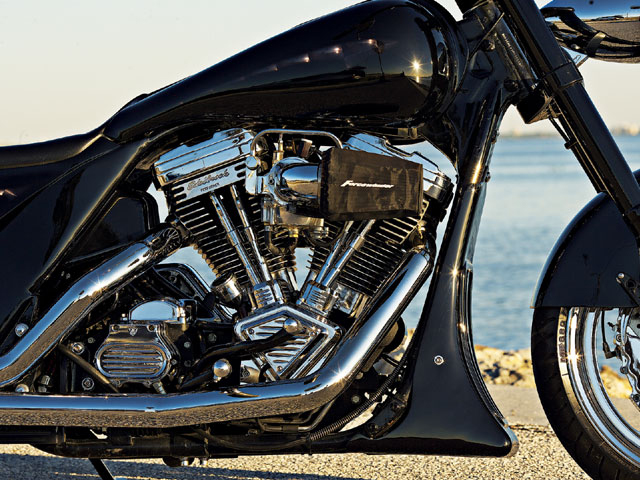 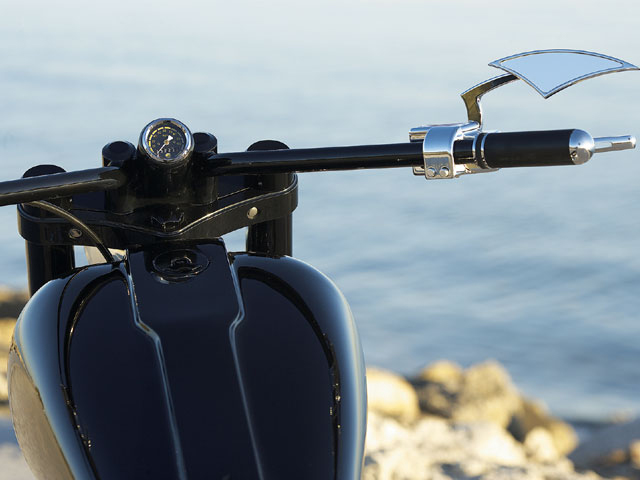 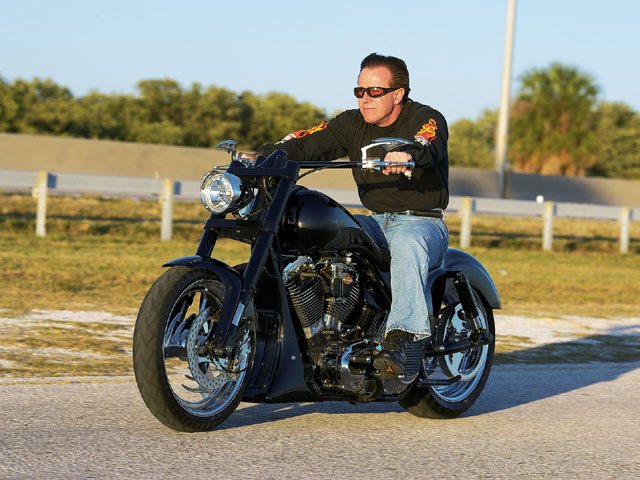 Here’s Jim’s leap into fabricating. He did all the metalwork, but Brad Rule helped out with the final welding. The speedo cup is Jim’s work, too.

HB: What would you do differently if you had to build it all over again?
Jim Schmit: Nothing. Not a thing. The stance is great. I park this thing around a bunch of flashy choppers and when I come back, my bike’s the one drawing a crowd. It’s just very clean and neat.
--Bike Owner Jim Schmit, during our interview regarding his FXR

That’s big talk, but it’s not really bragging, since he’s got the bike to back it up and did a lot of the work himself. Jim Schmit’s riding days started on the trails of upstate New York when he was kid. Dirt bikes and flat tracks were his bread and butter back then; it wasn’t until later when his biker dad introduced him to the custom street bike scene and hooked him with that bug. It’s been a few years since then, and now the younger Schmit hot rods his own iron. With his background, we weren’t surprised when he told us his biggest concern in a bike is making it fun to ride, like his ’93 FXR.

Stylistically, it’s low, angry, and somewhat sportbike-esque for a cruiser. That’s not the end of the cruiser/sport/custom hybridization, though. Ride-wise, it’s a balancing act between quick, tailor-made handling and not losing the smooth feel and FXR handling he fell in love with in the first place. “I wanted to go complete custom on my favorite Harley model, but I didn’t want to compromise the handling by changing the frame,” Jim elaborated. Like me, he’s vertically challenged; some stock Big Twins are less than optimal for our ergonomic needs. That’s how he fine-tuned his FXR. A lot of the changes were made for better fitment, mostly the lower suspension and the new handlebars.

Other modifications served to sport the bike up a notch or two. Although he left the displacement alone, he optimized the existing Evo with a new breathing setup, ignition, pistons, and barrels. Further, the new fenders and stretched Harley tank give it a streamlined, no-nonsense look that’s pure aggression.

It’s his second go at customizing an FXR. The first was a strictly bolt-on affair, but he upped the ante for the sequel by actually making some of the parts himself. He described it as a long process, whereby he’d get frustrated at some points, invent a few new swear words, then take a few weeks off and come back when he felt like it. He didn’t just dive into the water, though. Brad Rule at The Wrench is a buddy of Jim’s, and let him work on the FXR in his shop at night. Brad’s skills were a huge help in the lowering department and when it came time to weld the extended gas tank. Without The Wrench’s aid, the project never would’ve left square one.

Maybe they’ll help him with project number three. Jim’s taking the lessons learned from the first two and applying them to a Road King. Hopefully his dad can keep up when Jim takes it across the U.S.

Man shaving in front of a mirror. Supply/Unsplash For most men, shaving is a chore. Men don’t like shaving, and […]

Layer up this winter. Jeff Allen I hate being cold. I’m also not the biggest fan of most tech touring […]

You could call it a shocking development, but afterward we’d have to beat you with a stick. Courtesy of Aeromach […]