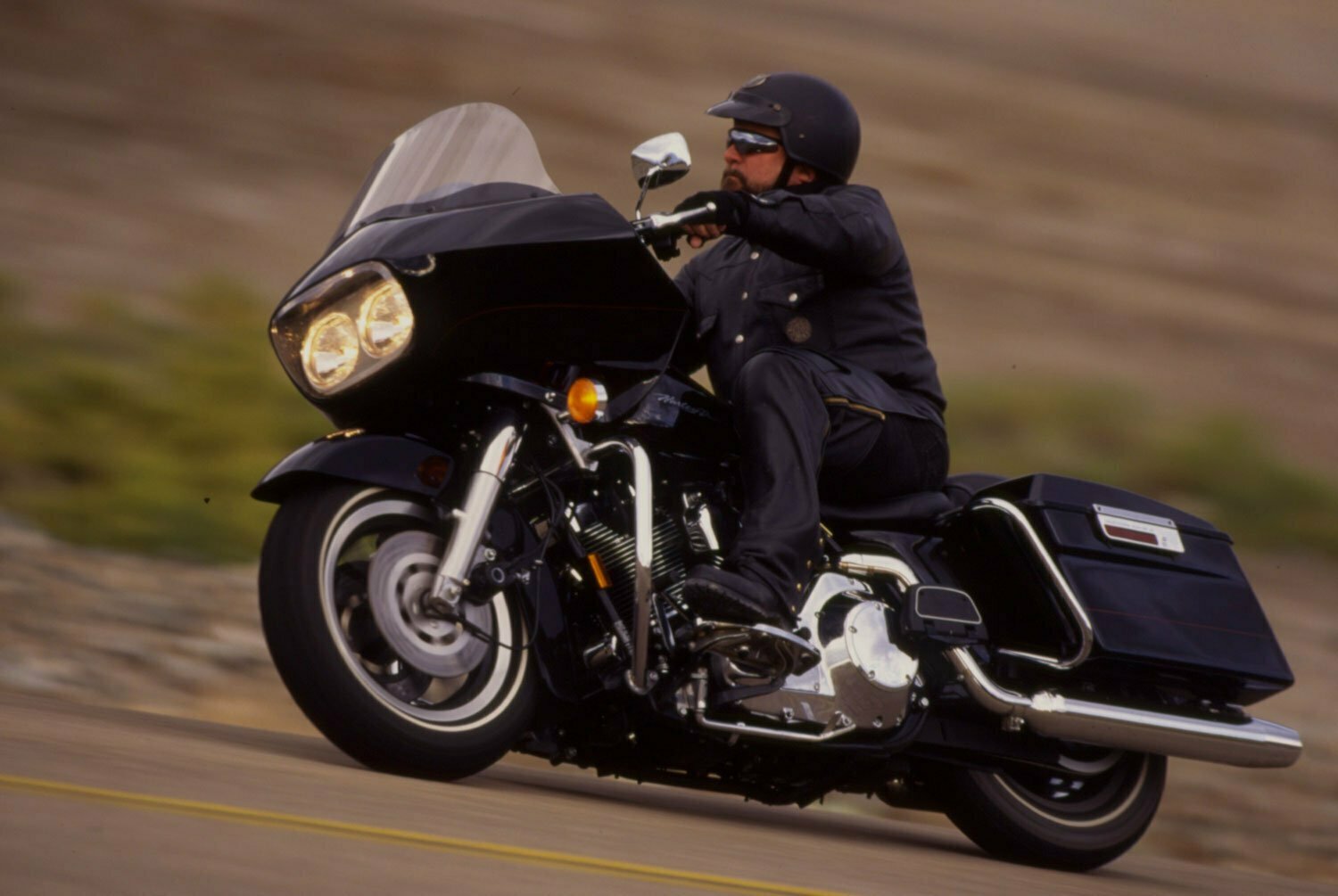 The Road Glide is a smooth, comfortable, easy-handling touring rig that even offers enough engine performance to exhilarate.

It was 10 months ago (April-May, ’98 issue) that we tested one of The Motor Company’s new models for 1998, the FLTRI Road Glide. We gave that bike a hearty thumbs-up for its overall competence and comfort level, but did think it could stand improvement in one important area: power. Over the years, ever-more-stringent emissions regulations had effectively strangled the Evo engine, not leaving much reserve power for necessary tasks such as uphill passing, brisk two-up acceleration or quick zips in and out of slower traffic.

Well, the necessary help has arrived. The FLTRI Road Glide is back for ’99, but with a bigger, better bullet in the engine bay: the all-new Twin Cam 88. The added performance of that motor has transformed the Road Glide from kind of a snore, acceleration-wise, into a snappy, fun long-distance travel companion.. 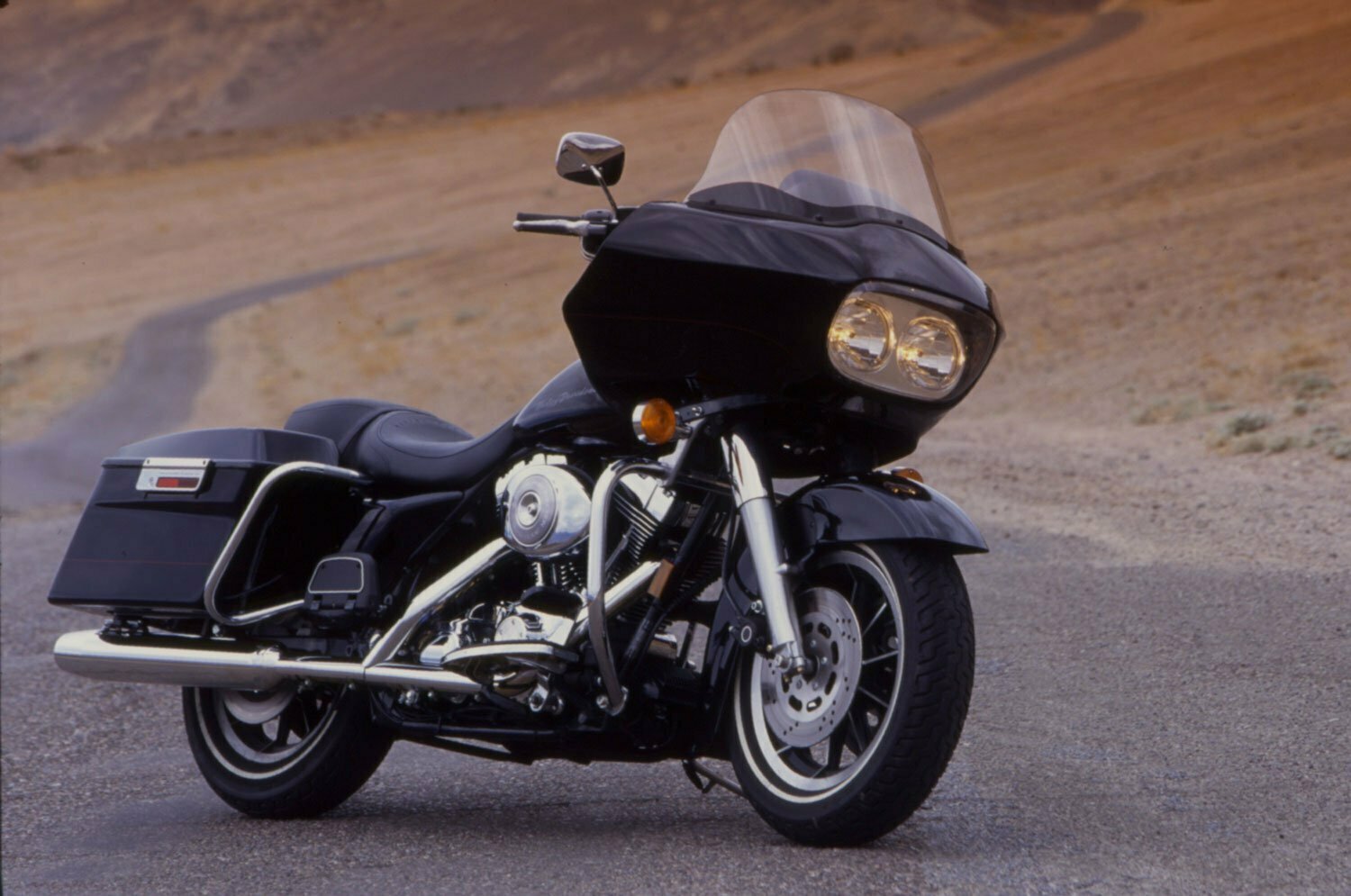 The most enjoyable aspect of the TC 88 is its absolute willingness to rev.

Aside from the new “Fathead” engine and a few small details, the 1999 Road Glide is unchanged from the ’98 version. It uses the same rubber-mount, dual-shock chassis, which is shared with all Harley touring models, and the same saddlebags as other hard-bag FLs. Also unchanged from ’98 is the frame-mount, dual-headlight fairing, which is a modified iteration of the fairing that debuted on the 1980 FLT Tour Glide, the company’s first rubber-mount five-speed model. This latest fairing has a more compact look than that original one, and although the low-profile windshield is standard, a variety of other heights is available from H-D. And, of course, the facory equips the fairing with Harley’s latest AM/FM/cassette stereo sound system.

Small changes to the ’99 Road Glide include an integrated rear-brake reservoir and master cylinder, with the entire unit located closer to the pedal. Harley did this for a cleaner look and to better accommodate the fitment of the new motor. There’s also a new sealed taillight assembly designed to prevent the lens and re­flector from fogging after a hard rain or a thorough bike wash. And for improved durability, a circuit board replaces much of the taillight hard wiring.

Considering how much we liked last year’s Road Glide, we couldn’t wait to get this more-powerful one out on the open road for an ex­tended ride. We decided that in late Autumn, a tour from our Newport Beach offices up to Death Valley would be arepresentative test for the new FLTRI. And fun. So, we packed the Glide’s spacious bags, dug out a California roadmap and pointed the bike north. This would be our first opportunity to tour on a Fathead-powered bike; it turned out to be a a lot of fun … and a real learning experience for us and for The Motor Company.

Nothing new in the cockpit, where all of the instruments and creature comforts are exactly the same as those on last year’s Road Glide. But in the Twin Cam 88 motor is something definitely new: power!

Once we got out of the L.A. maze and into the desolation of Highway 395, we opened up the Twin Cammer and let ’er breathe. Just as we had hoped, the new motor is a touring rider’s dream—smooth, snappy and deceivingly quick. The fuel injection delivres instantaneous throttle response, with nary a hint of hesitation under any circumstances.

But the most enjoyable aspect of the TC 88 is its absolute willingness to rev. Although no stock Harley motor could ever be described as “peaky,” the Twin Cam definitely comes into its own above 3000 rpm. That higher-rpm boost makes two-up riding and passing cars on two-lane roads a lot more fun—and a lot less risky. Maybe it’s the lack of vibration, may­be it’s the motor’s total disregard for the tachometer’s red zone, or maybe … maybe it’s just the time of man when Harley has finally moved into the 21st century. Whatever the reasons, mechanical or mystical, the 88-inch motor in the Road Glide more than meets our high expectations for overall performance.

You’ll likely pay a price, however, for your extended high-speed hustling. There’s an old axiom that says, “After the pin is pulled, Mr. Handgrenade is not your friend.” For taller riders, the same is true of the Road Glide’s low windscreen: Above 60 mph, Mr. Windshield isn’t your friend, either. The air that spills over the top of the short shield is turbulent, and it hits tall riders right about in the middle of the forehead. This can be really annoying—and tiring—on long rides, whether or not you’re wearing a helmet. We strongly endorse the optional tall windscreen for anyone who is six feet or more in height.

The wind protection from the body of the fairing, though, is highly commendable. After the same day of high-speed riding that tires your head and neck, your torso will be un­scathed and bug-free.

Leaving the straight expanse of Highway 395, we turned onto delightfully twisty Highway 190, which leads into Death Valley. Curvy roads offer a special challenge to motorcycles equipped with big touring fairings; and fork-mounted fairings, such as the Electra Glide’s, add mass to the fork that can make the steering sluggish in tight situations. But the Road Glide’s fairing attaches to the frame, thereby putting none of its mass on the fork and allow­ing quicker, easier steering. Obviously, this is not a sportbike by any stretch of the imagination, but it is the most nimble in Harley’s stable of fairing-wearing globetrotters. 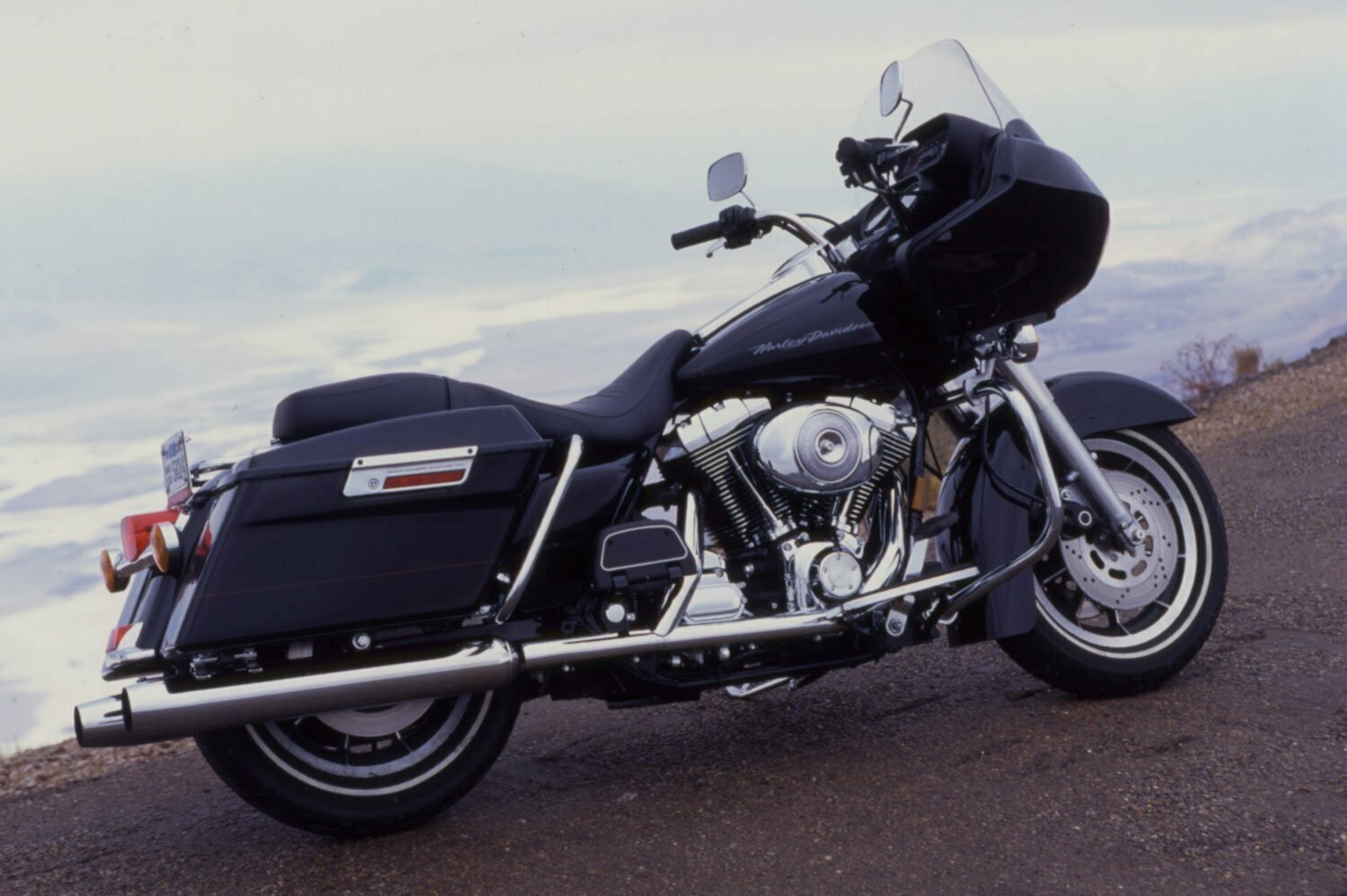 From the heights of the mountains surrounding Death Valley to the sub-sea-level depths of its basin, the FLTRI’s fuel-injection system never balked.

As light as the FLTRI feels, though, it still is a true slab-slayer, an interstate-class touring rig with fairing and saddlebags. Which means that sooner or later, it will have every available nook and cranny loaded with a passenger and a small apartment’s worth of stuff. So, we’re pleased to report that not only can the Twin Cam engine move all that weight with ease, so too can the dual-front/single-rear disc brakes slow all of it down predictably and consistently. Our test rider pushed the Road Glide hard through Highway 190’s curvatures for more than 110 uninterrupted miles and never felt a hint of brake fade front or back.

Once we finally arrived in Death Valley, we were curious to see how the fuel-injection system would handle the area’s considerable variations in altitude. We started in the basin, at 282 feet below sea level, then climbed up to Dante’s View, which lofts at 5475 feet above it. All the while, the injection system seemed to meter fuel perfectly, and the 88-inch motor ran strong—right up to the moment it died completely. As the bike coasted to a stop, we thought maybe it had run out of gas, but some rudimentary troubleshooting indicated a much more serious problem.

Ultimately, we had to call our contact at The Motor Company, who dispatched a representative from the media fleet here in Southern California to the rescue. He loaded the bike in his truck and took it back to the shop, where the problem was discovered: The bolt holding the cam-drive sprocket to the outer end of the rear cam had backed out, al­lowing the sprocket to disengage from the cam; and because the rear cam drives the front cam, neither cam was operating.

This problem was not new to Harley’s technical people; apparently, it had occurred on a few Twin Cam 88s out in the field, but never on a test bike. The engineering department be­lieves it has de­veloped a cure, but must test the remedy long enough to ensure its permanence. The company returned our test unit so we could finish our evaluation, but declined to reveal any spe­cifics about the repair until the results are more conclusive. We’ll report them to you as soon as we know them.

When we got the bike back five days after our testus interruptus, we set out on another ramble into the desert to continue the on-the-road theme of our test. This time we were traveling two-up, and our passenger informed us early in the ride that she would travel no more forever on this bike unless she had a backrest.

Duly noted. The passenger perch is soft, but the seating angle is such that the uneasy rider in the back feels like he or she will be flipped back onto the license plate every time the bike pulls away from a stoplight. At least there are lots of accessories available to fix that problem, either from Harley’s P&A department or other aftermarket sources.

Passenger complaints notwithstanding, the FLTRI Twin Cam Road Glide left us with a very positive impression in our minds—and a big grin on our faces. It’s a smooth, comfortable, easy-handling touring rig that even delivers enough engine performance to exhilarate. And at $15,150 (for a solid paint color), it is priced at a reasonable level, only $300 above that of last year’s Evo-powered equivalent.

In many ways, this is the best of Harley’s six-model FL series—just a taller windshield and a passenger backrest away from perfection.

Pingel Enterprise, Inc. is proud to celebrate 45 years in the motorcycle business. Also, this is their 5th year owning […]

SuperTrapp SE Series Slip-Ons (MSRP $439.00) are equipped with a race-proven baffle that gives riders a bolt-on performance gain of […]

The 2018 Motorcycle Cannonball Race Crosses The Finish Line In Oregon

Mission Foods King of the Baggers: Tickets Now On Sale for All 2022 Races