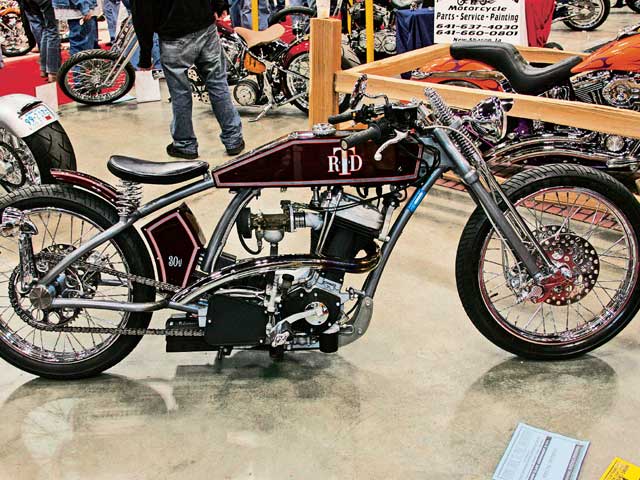 It might be the long cold winters. It might be the crisp, clean air, or maybe it’s something in the Michelob Golden Draft light beer (MGDLB) that flows freely in Minnesota. Rumor has it that this part of the country consumes more of the show’s sponsoring product, MGDLB, than anywhere else in the country. Whatever it is, the residents of this region are incredibly passionate about their motorcycles. We’ve heard that “the builders in larger markets and major metropolitan areas build the best bikes-they’re setting the trends and pushing the limits of style and/or performance.” While there may be some truth to this statement, none of the big-city builders have anything on the guys from the Midwest. Case in point: the 19th Annual Donnie Smith St. Paul Invitational, which took place March 25-26, 2006, at St. Paul’s RiverCentre.

The 2006 event marked the sixth year of collaboration between Donnie and American Thunder Promotions. The show’s lineage reaches back 19 years to what was originally the J&P; Swap Meet-a far cry from what it has evolved into today. The decision to pair up with American Thunder Promotions has turned out to be a wise move for Smith. Each year since the partnership began the show has seen tremendous growth in attendance, as well as the number and quality of the bikes entered in the show-not to mention enormous support from the local community.

The veteran bike builder has a huge following in and around his native Minnesota home. Anyone from the Twin Cities area with even the slightest knowledge of the American V-Twin industry knows about Donnie Smith and the motorcycle-building empire that is Donnie Smith Custom Cycles.

In addition to show attendees stopping by Donnie’s booth for a quick hello and to see what he and the boys have been up to lately, the big draw is undoubtedly the bike show competition. This year’s show saw just shy of 200 entrants in multiple categories (43, to be exact). Although the prize money is not the main motivating factor for most builders entering the show, Donnie sweetened the pot with $8,500 to be doled out to the winners. While there were far too many awards handed out to report on here, we do want to tip our hats to Thomas L. Hendrick for winning the coveted title as the 2006 Donnie Smith “St. Paul” Invitational Grand Champion, and Dana Hallberg for taking top honors in the Pro-Class

With the huge number of bikes to be displayed, getting them all into position prior to the opening of the show was no easy feat. The American Thunder crew began rolling the bikes into place on Friday, which saw a bevy of activity between placement of the bikes, contestants setting up displays, and a handful of judges scrutinizing every inch of every bike entered in the show prior to the scheduled opening at 11 a.m. Saturday. By the time 9 a.m. rolled around, there were already so many people in line at the RiverCentre that American Thunder’s Neil Ryan had no other choice but to open the doors two hours early.

In addition to Donnie, there were plenty of big names from the motorcycle industry at the show. Guys such as Billy Lane, Dave Perewitz, and Brian Klock could be seen eyeballing many of the bikes entered in the show. Other notables in attendance were House of Kolor’s Pro-Class sponsor, John Kosmoski; Keith Terry; and Arizona-based Jim Nasi.

Contrary to all the big names in attendance at the show, there were some rookies with big ambitions, namely the kids from Kennedy and St. Francis high schools. Kennedy’s shop teacher Kevin Bass put together a program where he begged, borrowed, and stole (OK, he didn’t really steal) everything he could in order for his kids to have the opportunity to build a bike. The program has been such a success that Kevin challenged the other area schools to do the same, and his challenge was accepted by St. Francis. Both teams built beautiful motorcycles, which were on display at the show. In a spur-of-the-moment decision, Billy Lane offered up a mini apprenticeship to one of the students, in the form of helping out on his next Biker Build Off project. Not to be outdone, both Perewitz and Klock made offers of their own, which were eagerly accepted by the two schools.

In a move to get the local community involved in the show early, Donnie and American Thunder hooked up with FM radio station 93X as they built a bike to be given away to one lucky listener. Over the weekend live broadcasts took place from the show with 93X’s duo Weasel and Remy. While the basics of the bike were designed by Donnie, the station ran promotions in which its listeners were able to help decide on items such as wheels, exhaust, handlebars, and paint. When it was all said and done, one lucky young lady (number 25 out of 26) had the key in her hand that would allow the bike to fire.

The show had its share of companies exhibiting their wares, including homegrown Victory Motorcycles-the sponsor of all but the Pro-Class portion of the show. Altogether there were about 75 vendors spread out over the show floor, as well as the upper level of the RiverCentre.

Keeping a solid connection to the first show of nearly 20 years ago, there was a modern-day swap meet adjacent to the main floor. It occupied 44,000 square feet of exhibit space where buyers could dig through box after box of new and used parts at a fraction of the price they might pay elsewhere.

Mark your calendars for next year’s show, which is scheduled for March 24-25, 2007. If you can’t wait that long, Donnie is putting on a show in Rochester, MN, on February 18, 2007. For more info, log on to www.donniesmithbikeshow.com.

They say racing improves the breed, but does that include smoky burnouts in a bike-show parking lot or hauling ass […]