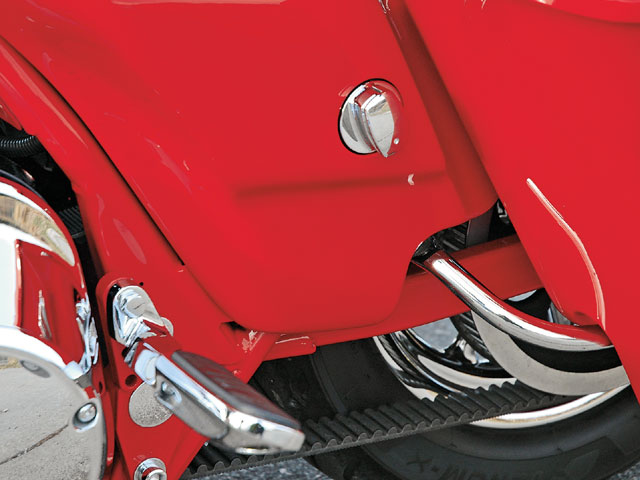 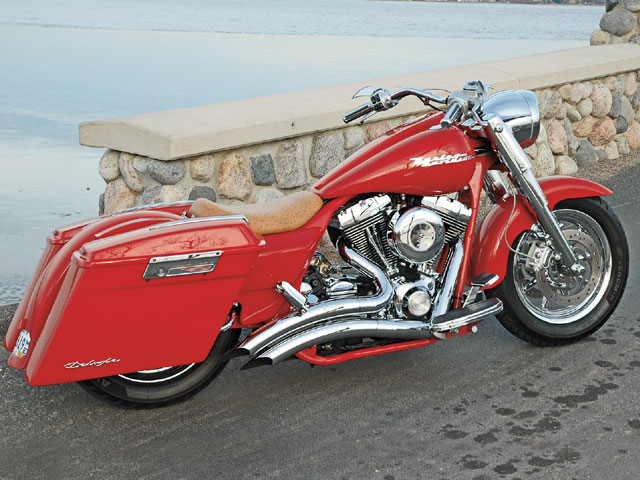 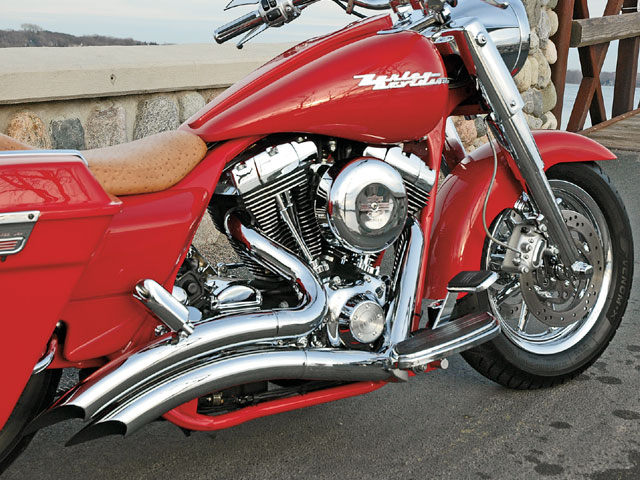 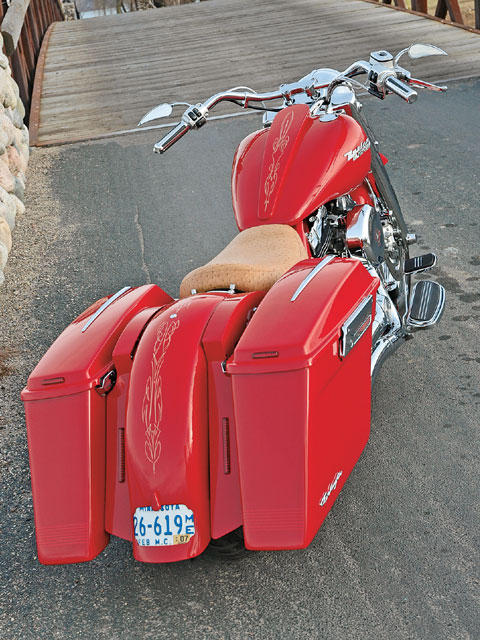 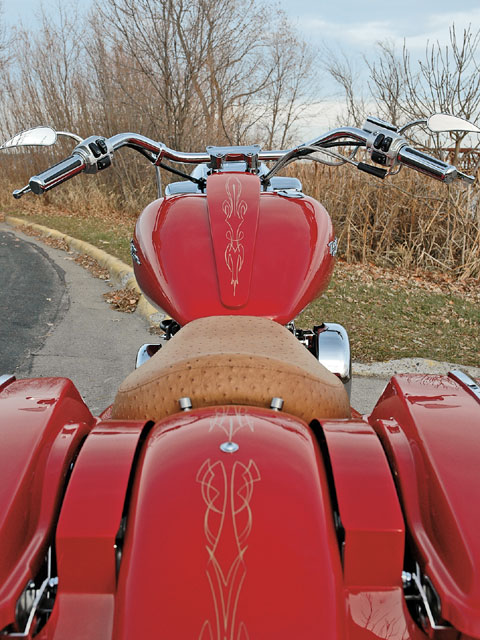 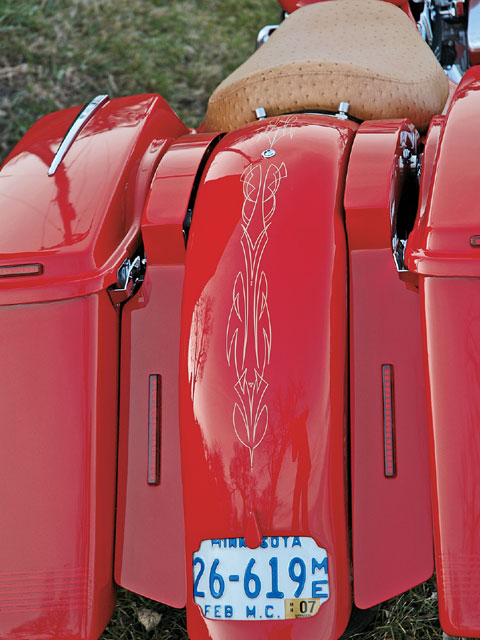 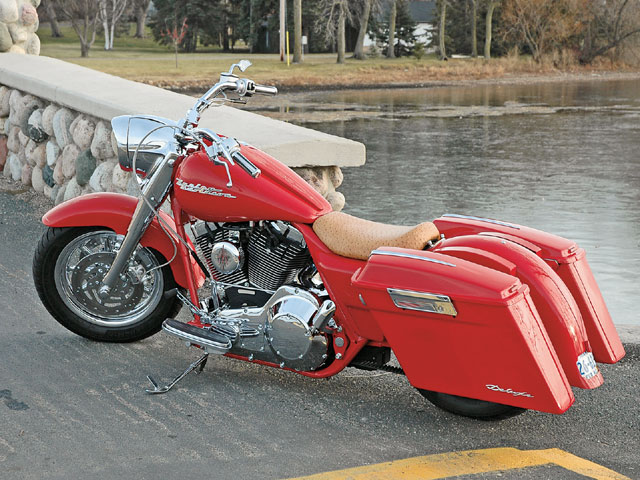 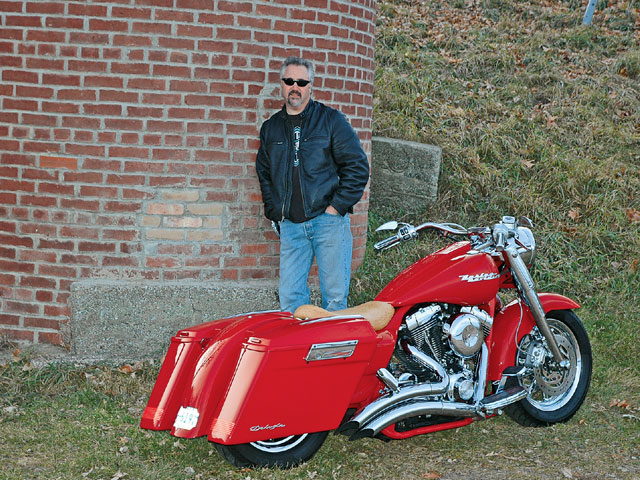 Here at HOT BIKE we get a lot of rides-Harleys, hogs, whatever you want to call them-submitted by our readers each month. “Pick of the Pen” is an opportunity to dedicate a few pages to our favorite reader-submitted bike each month. This month’s bike is from owner Dave Huebl of Maplewood, MN. Here’s the story of this bike, in Dave’s own words.

“I decided to build a long, low, and clean bagger to stand out amongst the flooded chopper market. I started with the exhaust: Vance & Hines Big Radius pipes caught my eye, and I decided the clean flow of the pipes would be the starting point. I cut the frame apart, repositioned the floorboard mounts, and fabricated new mounting brackets so the exhaust looked like it belonged on this style of bike. Following that, the tank was stitched using a set of old Harley donor tanks 5 inches back, and then I welded extensions on the sides 1-1/2 inches down to follow the flow of the exhaust. I remounted the tank 1 inch forward to take up the space and give a cleaner look. Right after that, I welded up square stock and covered it with flat stock to create a compound curved dash that fit perfectly to the tank.

“I modified the bags to be slightly shorter and had to fill in the back where the exhaust would exit. I stretched the rear fender to meet the bags and fabricated several hidden brackets to support the bags. Staying with a clean, smooth look, the top bag fillers were from Klock Werks, and I modified them to my rear fillers. LED lights were frenched into the bag tops as well as the rear fillers. I used the stock seat foam but had to lay up a new seat plate because of the tank modifications. Both halves of the seat were cut down several inches, allowing a cool look but a harder ride. Thanks go to Mark Milbrandt for stitching the ostrich skin onto my handiwork. Combined with the shorter Soft Ride shocks, the relocation kit from White Brothers, and the Ness lowering kit in the front forks, the bike has a nice low stance. (It’s a little harder on the bumps, however.)

“Wanting to stand out in a sea of black bikes, I chose the brightest, cleanest red I could find and started painting and sanding to achieve a mirror-like finish. A little Von Dutch pinstriping to match the seat from Lenni at Krazy Kolors completed the package. The bike has a balance of color and chrome, just enough of each to complement one another.”

Journey Into the Unknown