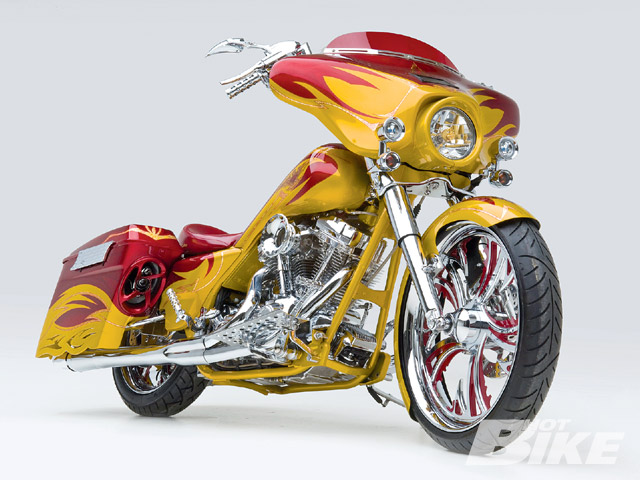 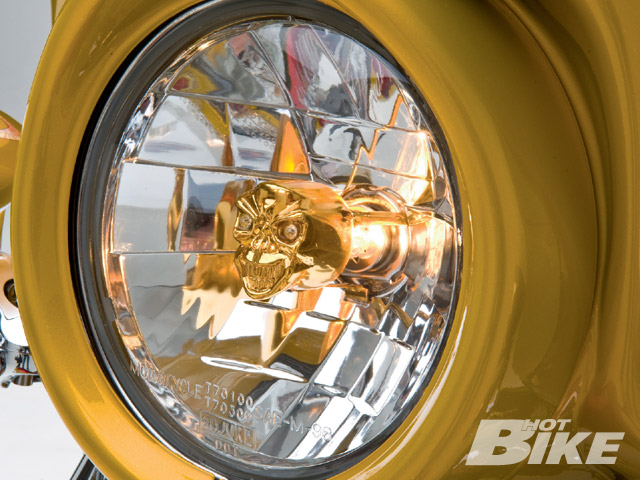 One of the often-overlooked details on Toriano’s ride is this golden headlight skull with diamond eyes. 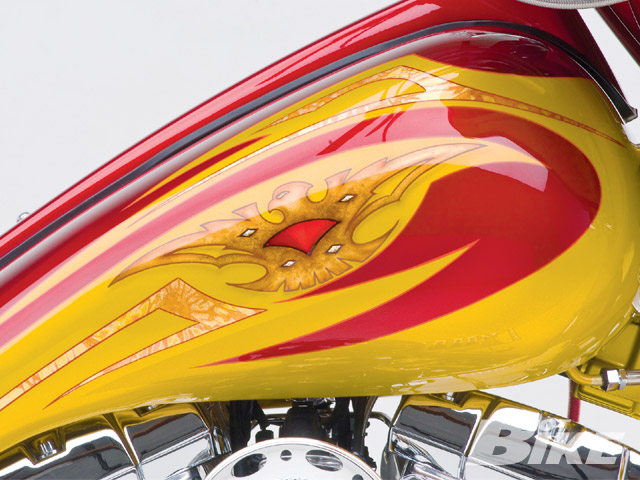 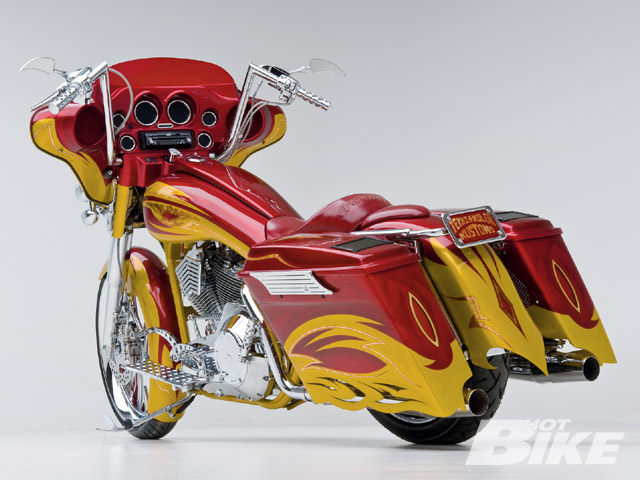 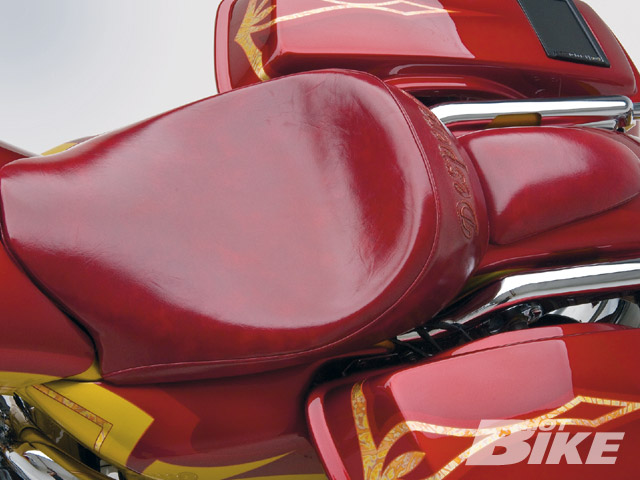 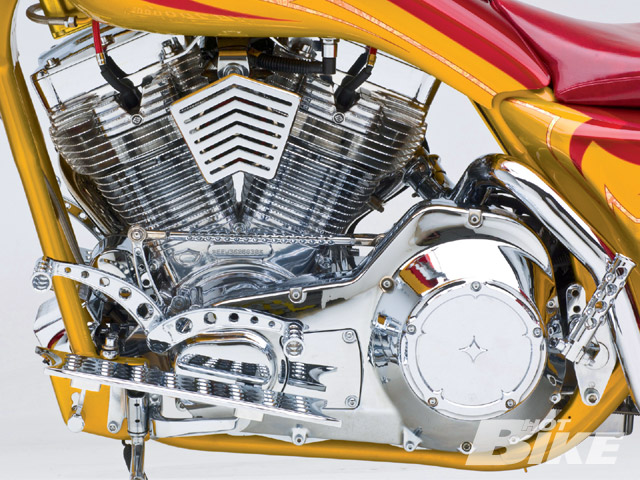 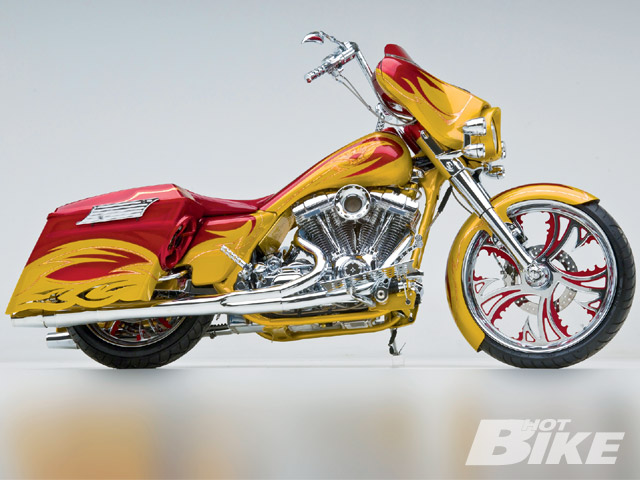 Being from San Francisco, Toriano had his bike color-matched to his hometown NFL team. 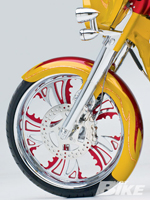 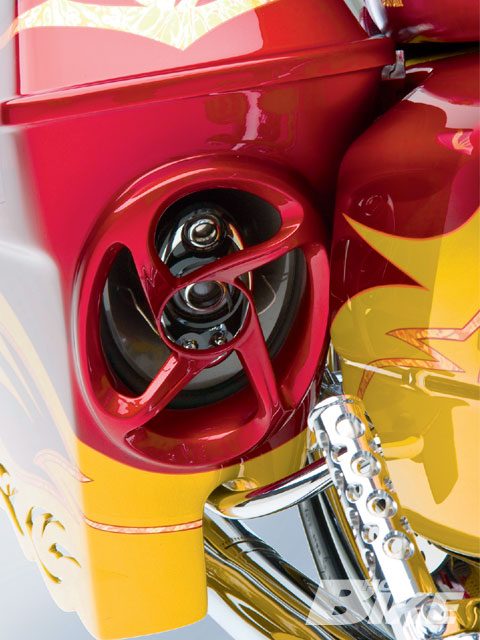 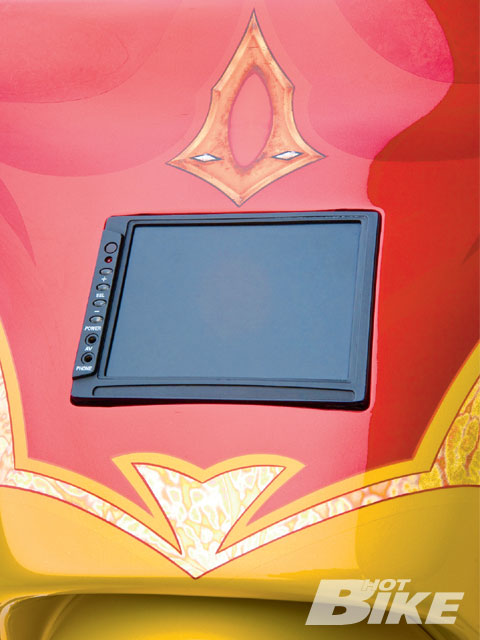 Here’s looking at you. A hidden camera projects admirer’s dropped jaws on this TV screen mounted on the FRONT of the fairing.

We’ve all been in that situation where a project seems really simple or straightforward, right? Then as things progress, what seemed like a quick and easy task snowballs into something much more intricate, involved, and time-consuming; like Toriano Brown’s ’03 Electra Glide. When Toriano purchased his ’03 Electra Glide from Dudley Perkin’s H-D in northern California, he was like most brand new Harley owners, he immediately swapped out items like the pipes and wheels and added some chrome. After riding the bike for several years and continually adding upgrades, Toriano was ready to do the unthinkable–strip off the 100th Anniversary edition paint and have a completely custom color scheme applied to the sheetmetal.

One of Toriano’s friends had a bike that had recently been painted by a shop called Tekni-Kolor Body and Paint in Fairfield, California. Toriano really liked the paint so he decided to head over to the shop and talk with the owners, Steve Santos and Tommy Gerk. After cutting through the small talk, Toriano explained what colors he wanted and the theme. It was right about this time that the first snowflake fell onto the project. As Steve and Tommy were pulling the sheetmetal off the bike, Toriano would check in every once in a while with some new ideas or parts he wanted to incorporate into the build.

Since the sheetmetal was going to be painted, Toriano decided to customize it first–the snow was beginning to build up. Originally, Toriano wanted to stretch the sadllebags and french-in the taillights. Tommy and Steve were totally cool with the idea since Tommy handles all the fabrication at the shop and Steve lays down the paint. As Tommy got into stretching the bags, Toriano noticed that a lot of the other guys he rode with had stretched bags as well. So to be different he asked Tommy to cut some tribal style designs out of the extensions. Tommy obliged and as he was finishing up the extensions, Toriano came back with some new wheels.

When he purchased the bike, Toriano picked up a 21-inch front and 18-inch rear wheel. At that time he was one of the only guys he rode with that had that setup. As time went on, more and more of his riding partners adapted the style to their bikes. So naturally, since the fenders were coming off, Toriano decided to run something totally different and steam-roll over all his friends with a 23-inch front. To get a really tight look around the 23, Toriano got his hands on one of Fat Katz new wrap-around fenders specifically designed for the large wheel. The snowball began to gain speed and size as Toriano figured since Tommy was already stretching the saddlebags, why not customize the rear fender to match the stretched saddlebags, which then led to stretching the tank so that the tail section would slip all the way back and flow right into the sidecovers.

Somewhere along the line came the idea to add an inconspicuous backup camera that would display what was going on behind the bike via the LCD he already had in his custom stereo/dvd player. But then Toriano began thinking it would be cool to incorporate two screens into the tops of the saddlebags so that as people walked up behind the bike, they could see themselves in the screens. And since he had a camera and screens at the back why not have a similar setup up front as well. So Toriano asked to have another camera hidden up front and an LCD flush mounted into the center of the outer fairing. “There was a lot of open space on the outer fairing, and I just wanted to break it up with something different and unique,” Toriano told us.

Like most Harley enthusiasts, his bike was the prime topic of conversation with all his friends and family, so much so that even his 4-year-old daughter got hip to the concept of customizing a motorcycle and commented, “Don’t play with it daddy, go down to the frame with it.” So naturally, Toriano’s next request was to pull the drivetrain out, strip the bike down to the frame and completely mold and paint the chassis. Since the engine was already out, and he had already bumped up the front wheel size, increased the number of TV screens he had, and stretched every piece of body work on the bike, why not bump up the stock TC to a bigger displacement as well–not just mildly but drastically to 124 ci, completely polished and diamond cut.

Needless to say the snowball was in full decent by this time and the Tekni-Kolor team had their hands full with fabrication, extensive smoothing and molding, wiring, paint, and reassembly. What started as a simple custom paintjob turned into a two-year complete transformation from mild modification to wild makeover. Toriano said that as soon as the bike was finished he took it over to the San Francisco Rod and Custom Motorcycle Show and won Second place in the Full Touring class. He also said that he had one more major show he was going to display the bike in, the Arlen Ness bike Show in San Mateo, California, then it was going to be time to hit the streets and put all that planning, part purchasing, and waiting to good use and ride the hell out of the bike.

Dominate your gift exchange by putting more Harley into your holidays, there’s something for everyone, whether they ride or not. […]