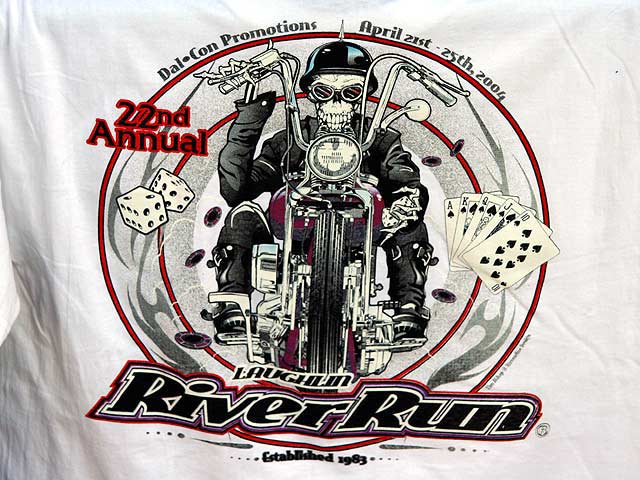 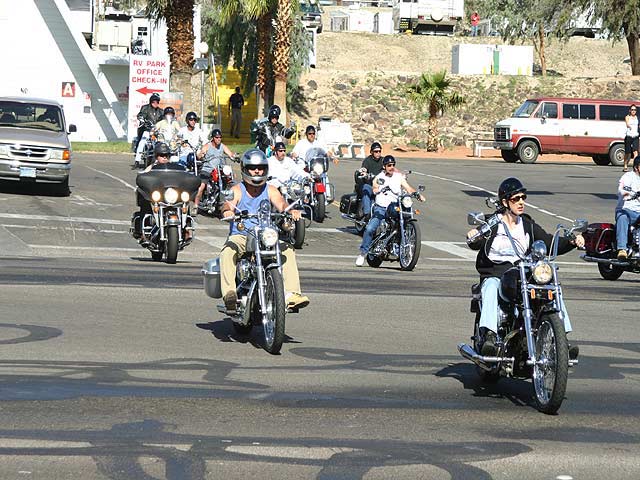 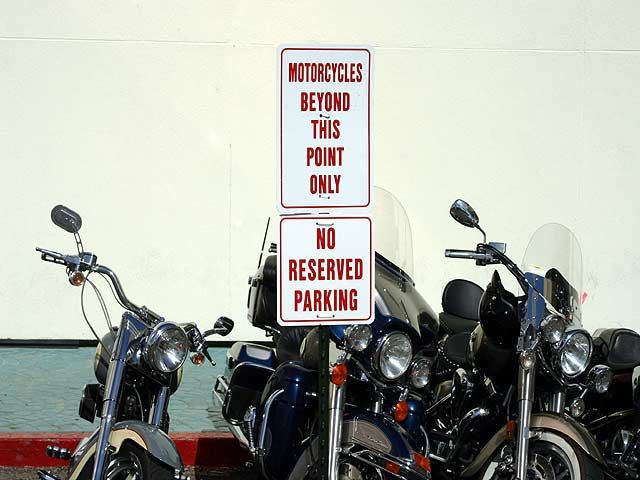 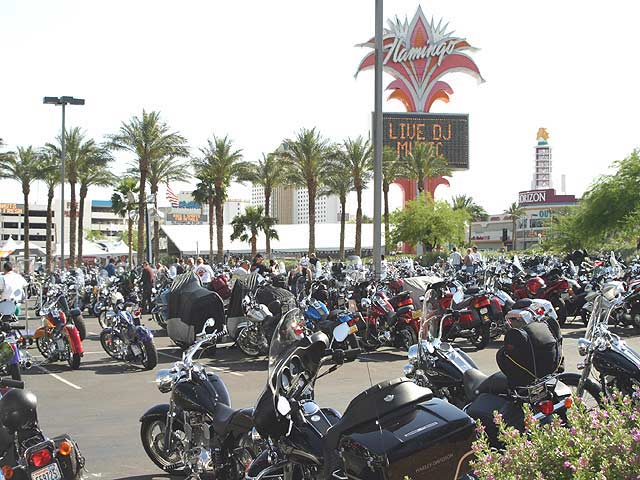 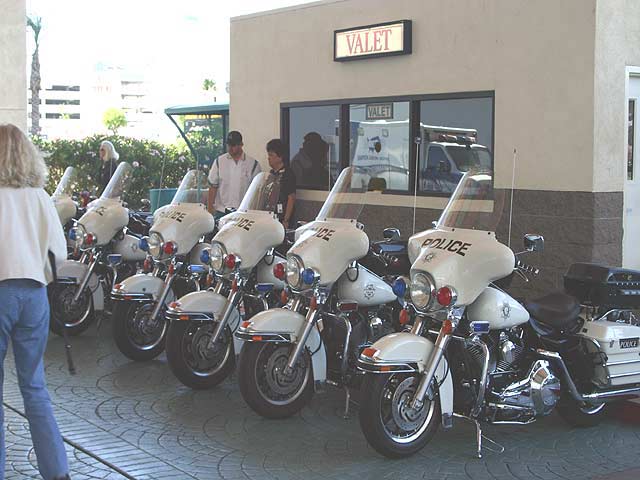 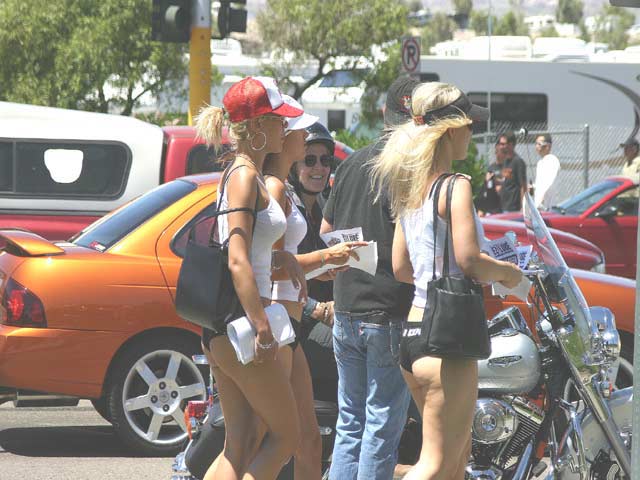 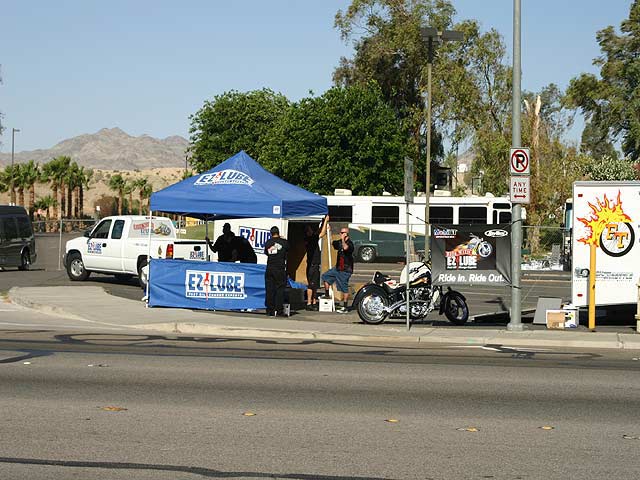 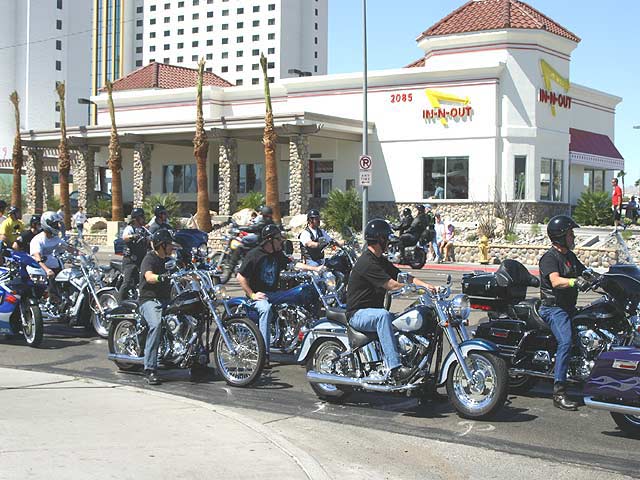 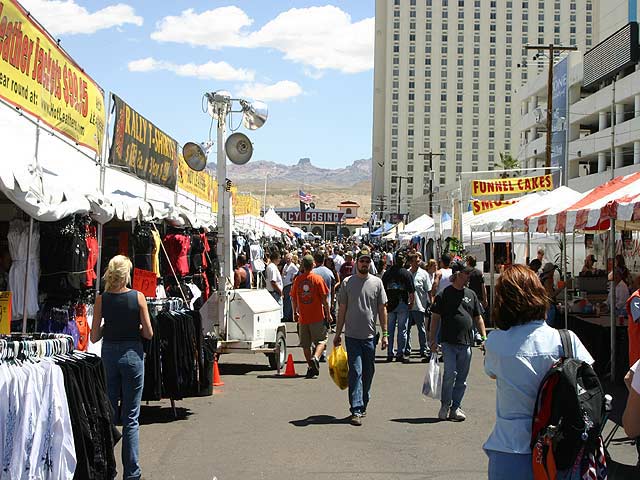 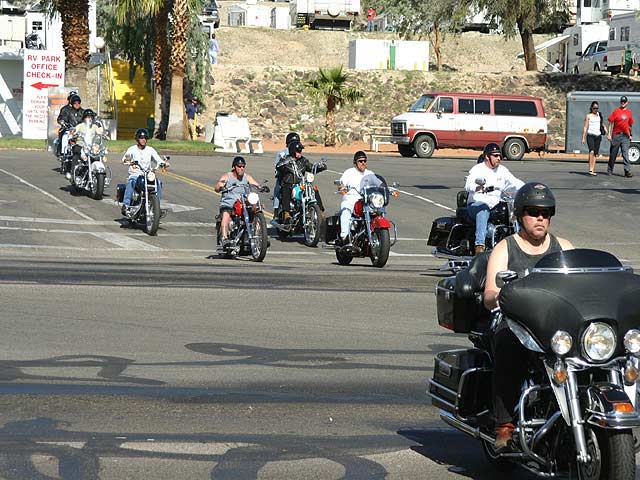 I have to tell you right off the bat that this was my first visit to Laughlin’s River Run. I’d heard all the wild stories about late nights, 24-hour parties, street racing, gang shootings, heat, dust, and people packed in like sardines. I mean, what else would happen during a HUGE bike run out in the middle of nowhere? So to be honest, I was more than a little apprehensive while driving through the desert on my way to the river. As I pulled into Laughlin, all of the stories I made up about what I thought was going to happen at the 2004 River Run were quickly dispelled as I joined the parade of bikes making their way to the hotel/casinos for the weekend!

Laughlin is this cool little city on the banks of the majestic Colorado River, and features a row of Hotel/Casinos just waiting for the hoards of people to come in and have a good time for the next 5 days. The weekend was looking good too, as the weather report was temperatures in the high 80’s … perfect weather for riding! As I entered the valet parking area of the Flamingo Hotel, I was amazed at the sheer number of motorcycles that were packed into the parking facility. Even more stunning was the line of police motorcycles taking up one row of the front drive entrance. This was a powerful statement as to the police presence for the week.

The 22nd Annual Laughlin River Run was like the worlds biggest street fair … with a parade that never stops for the entire week. In fact, the rumble of low-slung Harley-Davidson motorcycles were heard non-stop, day and night. This is not to say it was a Harley-only event … far from it. But it was clear which bikes were the favorite of the participants and onlookers alike.

There was so much to see and do during the week, it was hard to take it all in. There was something going on at each of the Hotels along the Laughlin Strip. At the end of the Strip at the Riverside Resort (which was built by Don Laughlin, the founder of the city) was where all of the event registration was happening. They also played host to one of the many vendor areas that were spread out along the strip. The Flamingo had another vendor area to explore, as well as the Miller Roadhouse, where you could get some icy cold beverages, listen to some great music and just get a little shade from the heat of the day. Another cool aspect of the Roadhouse was it was the perfect location to do some serious motorcycle and girl watching.

Down the street at the Golden Nugget, the Discovery Channel brought out the contenders for The Great Bike Build Off. Ten of the best bike builders around faced off to see which bike won the coveted title. The builders in attendance were Chica, Arlen Ness, Corey Ness, Russ Mitchell, Eddie Trotta, Kendall Johnson, Mitch Bergeron, Joe Martin and Matt Hotch … the display of custom machinery was incredible. I’m not going to spoil the surprise and tell you who won; you’ll have to watch the Discovery Channel when the show airs.

Fresh from it’s first appearance at Daytona Bike Week was the Chop Shop Tour … a chance for enthusiasts to get a close up look at some of the hottest machines from Billy Lane, Joe Martin and Jesse Rooke. These bikes are some of the most unique and interesting to look at, as well as fully functional riding machines.

Over in the vendor area, there was a plethora of familiar names; American Iron Horse, Big Bear Choppers, Arlen Ness, Custom Chrome, Harley-Davidson, Yamaha, Honda, Exile Cycles, Choppers, Inc, West Coast Choppers, S&S;, Edlebrock, Samson, Big Dog and Titan were just a few of the big names. That brought out HUGE displays to show off their latest offerings. If you were looking for wearables, you could outfit your entire 2004 wardrobe with all of the clothes, leathers and other cool biker accessories for sale. The hot ticket was the official River Run merchandise, which was everything from work shirts; T-shirts and other really cool stuff.

I could go on and on about everything at the show, but just take a sneak peek for now, and you can check out the full coverage in an upcoming issue of Hot Bike, Street Chopper and Hot Rod Bikes magazines.

‹ Keeping With the Times › Old-School Looks…

Blundstone 510 Boot $170 us.blundstone.com Photo: Hot Bike Staff There are tons and tons of motorcycle boots on the market […]

1. This supercharger from MagnaCharger is gear-driven by the engine’s crankshaft. It is designed to pressurize the intake tract to […]

Head-Light – From The Editor