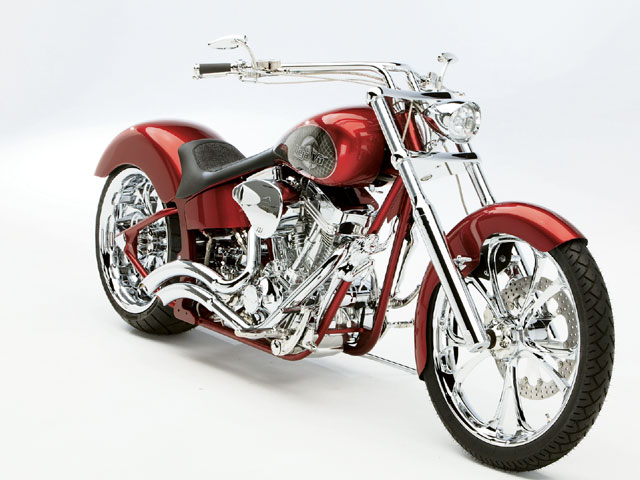 When you want fast, who’s your guy? If you reside on the West Coast, that’d be Wink Eller of Wink’s Performance & Machine, located in Temecula, CA. Anyone who knows Wink knows “fast” is exactly the kind of bike he builds. Fast was the theme of the day when the owner of a gentlemen’s club called Wink with a special build proposition: He needed a cool custom bike to serve as club mascot on a year-long tour. At the end of the tour the bike would be given away to the lucky patron who happened to buy a lap dance at just the right time.

It all started when Wink was part of the HOT BIKE 124ci S&S; shootout, where five top builders were given the challenge to build a bike around an S&S; 124ci motor. The catch was that the motor couldn’t be altered, but the sky was the limit for the rest of the build. Wink approached the shootout the way he does every build. He built the best Pro Street bike he could. Wink feels it’s important his bikes be accessible to anyone who’s interested. Basically, if you see one of his bikes, he can build you one just like it, no problem. And that’s what happened with the owners of the Dj Vu gentlemen’s club. They saw the shootout bike and asked Wink to build them one just like it as a giveaway bike.

The customer wanted a 121ci TP Engineering motor. Wink added on a 45mm Mikuni carb and a Martin Bros. exhaust. A Baker six-speed, along with a 2-inch BDL, was chosen to stand up to the motor. Wink needed a place to put all that power, so he went with a Softail frame from Xtreme with 38 degrees in the neck and 4 inches added to the backbone. To complete a rolling chassis, he chose a set of wheels from PM: a 21-incher up front with an 18-incher out back-both covered in Metzeler tires. PM brake calipers and rotors were picked for stopping power.

The next part of the build was the sheetmetal; Xtreme Cycle made this choice easy with front and rear fenders, along with the gas tanks. When it came time for paint, everything was handed off to 8 Ball, where a coat of candy-red miniflake covered the sheetmetal and a club logo was airbrushed onto the gas tank. As the build was wrapping up, Wink handled the last of the accessories, including a taillight and license-plate mount from Russ Wernimont Designs, as well as a Headwinds headlight. He also installed custom handlebars and risers from Xtreme and the one-off seat from Bitchin’ Seat Co.

Wink’s building philosophy has already been put to good use. When the owner of the club saw the finished product, he told Wink to build another bike exactly like it. Of course, the second bike stays in the club and isn’t for up grabs for some lucky lap-dance recipient. So tell your old lady that you just went to try to get a free bike. Good luck.

Now I’m going to show you my method for making a “shrinking” stump. Like a lot of things, there isn’t […]

The scribe height was then set to 6-3/8 inches. Next, Brendon made sure the right-side tank fixture was set to […]