2005 Gangsta Choppers – A Heart Of Glass 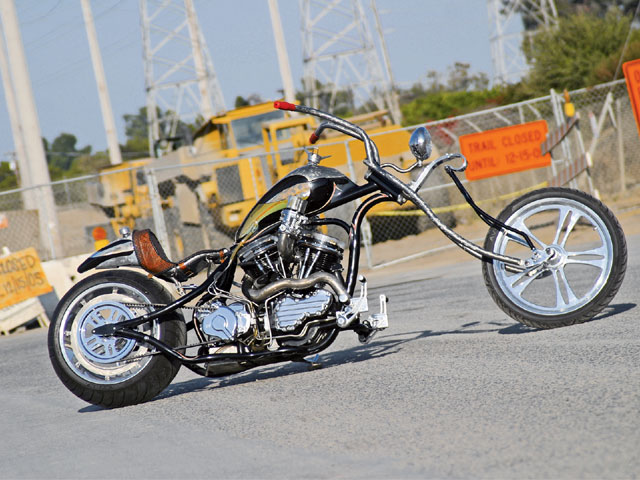 Some bikes are easy to describe-they embody the fundamental look of previous machines, with only the subtle flavor of their respective builders keeping them from turning into exact duplicates. The aforementioned customs are readily defined using established names such as chopper, bobber, Pro Street, or even the well-worn “old school” moniker. On the other end of that scale is the Glasster, and it doesn’t take more than three seconds to realize that this bike doesn’t fit into any known category. One thing is certainly clear-describing this two-wheeled deviant is anything but easy. Builder Alan Lee is no stranger to the unusual, since he’s already created many a bike that defies description. He also serves as the driving force behind Belgium-based Gangsta Choppers. His work has appeared in magazines and books across the globe, as well as the Discovery Channel’s World Biker Build-Off. Alan is not afraid to try things other builders would never consider, and the Glasster is a perfect example of his brazen disregard for traditional design. When asked to describe his recent work, he replied, “I like my bike to look like a bug.” Out-of-the-box thinking doesn’t even begin to convey this rogue builder’s style.

As with any unusual bike, this one has an interesting story, one that’s especially compelling considering that it spans several continents, involves a cast of unconventional characters, and includes a cross-country odyssey that concludes at one of the wildest bike shows in the country. The saga began a few seasons back, with a call from Ted Smith (of the world-famous Rats Hole Custom Bike Show) and a query regarding Alan’s interest in attending the Daytona event. The idea of a glass-laden bike was born, but unfortunately the show was thousands of miles and nearly a year and a half away, and the plans were soon forgotten. A busy schedule kept Alan distracted until a belated reminder call put the gears back in motion. Now faced with limited time, no shop, no parts, and a first-of-its-kind concept, Alan boarded a plane from his native Belgium for a 10-hour flight to sunny California. These would be insurmountable odds for most, but within a few days Alan had established a base of operation at Jack’s Lowriders in Fountain Valley, CA, recruited Todd Townsend and Tim Doran of Killer Glass to handle the see-through parts (as well as Chris Madison to help with the not-so-see-through stuff), and by week’s end had begun construction. An impromptu meeting at the Custom Chrome headquarters resulted in RevTech’s modern 98ci version of the panhead motor (aptly dubbed “Pandemonium”), as well as a Baker right-side-drive trans and several other drivetrain components. The wheels, tires, pulley, rear brake, and BDL 2-inch belt-drive primary are courtesy of Daniel Boone.

Most of the big pieces were now sourced or under construction, and work continued at a hectic pace on the unique frame. The sinuous lines of the chassis are something of an Alan Lee signature look and are all completely hand-formed. Keeping with the organic nature of the bike, both the fork and tail section are suspended by leaf springs that began their life under a mid-’50s Ford, while the seat was hand-tooled by Bulldog Leathers from an old saddlebag.

The real heart of this machine is the glass (no pun intended) tanks, painstakingly created by Kildee Scientific from Pyrex glass. The fuel tank required three iterations (the first two broke), and since cutting a tunnel in the glass would likely have resulted in a third shattered tank, a redesign of the frame was also required. The finished unit is now mated to a rubber-layered cradle and capped with a vintage wheel knockoff. The oil tank is also Pyrex and is judiciously mated to the tail section with raw metal. Furthering the dichotomy of a glass motorcycle, the suicide shifter is made from a ball-peen hammer. Nonexistent manifolds required the crew to create their own, and, to keep things interesting, they added a 10-degree forward tilt to each dual-throat carb. Additional details include a headlight that served as a police car’s searchlight during the ’50s and LEDs in all of the glass, transforming the bike into a rolling lava lamp at night.

Facing a limited calendar and a long drive, Alan chose to pack things up and enlist help along the way. A two-day layover at Killa’ Cycles in Dallas, TX, helped finalize a few details, as well as the glass coating on the exhaust. Final construction was done in parking lots and trailers during the balance of the trip. The finishing touches happened at Bike Week right on Main Street with the help of Warren Vesely of Scooter Shooterz. The final show went as you might expect, with many a custom bike enthusiast trying to fit Alan’s square-peg building style into the round hole of established design. With its chaotic buildup in the past, the Glasster now rests comfortably in the Peterson Automotive Museum in Los Angeles, CA, where onlookers continue to make a vain attempt at describing it.

Because the build of this bike utilized the skills and talents of a large group of people scattered across the country, Alan would like to give them credit for their efforts. Thanks go out to Ford Stell, Dave Scott, and Scott Martindale from CCI; David Demarest of Weber North America; Gloria Ishimoto of Daniel Boone Company; Todd Townsend from Optifloinc; Tim Dorin of Killer Glass; Phil Trenery from Precision Tooling; Bob Maiden of Kildee Scientific; Killa’ Cycles’ Mario Cavazos; Barbara and John from Bulldog Leathers Daytona; and Warren Vezely of Scooter Shooterz.

The 1960s mean different things to different people, even riders. For bikers it’s about choppers, for racers it’s the dirt […]

I grew up in Croatia in a small town with a racetrack that ran through the upper part of town. […]