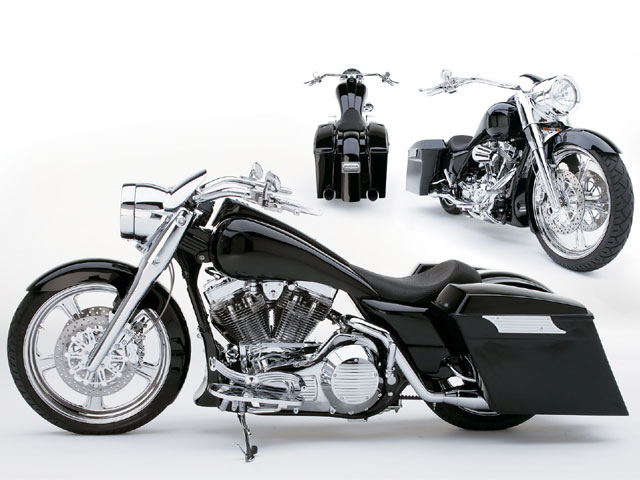 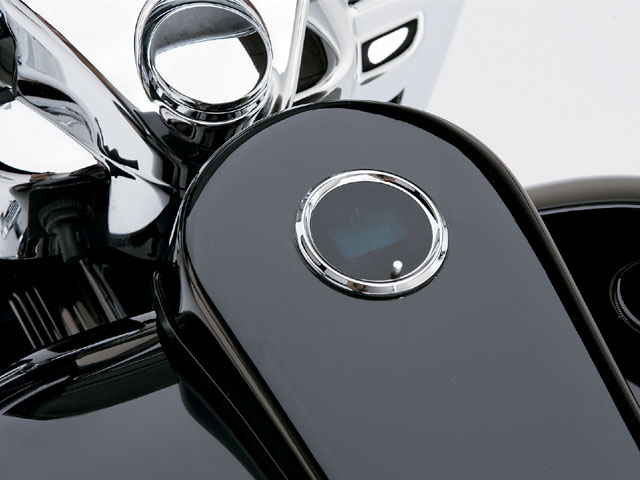 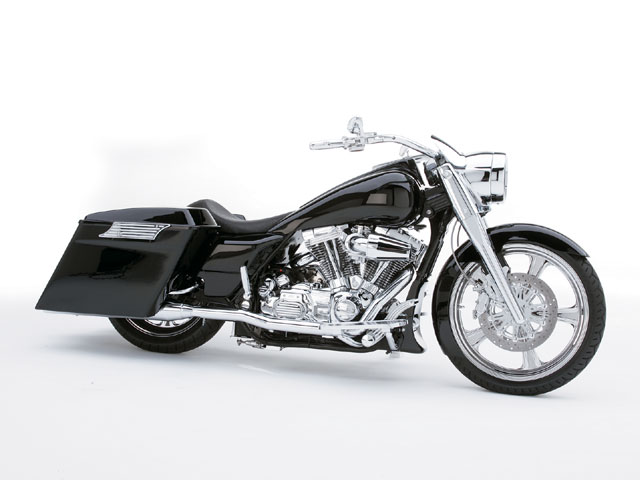 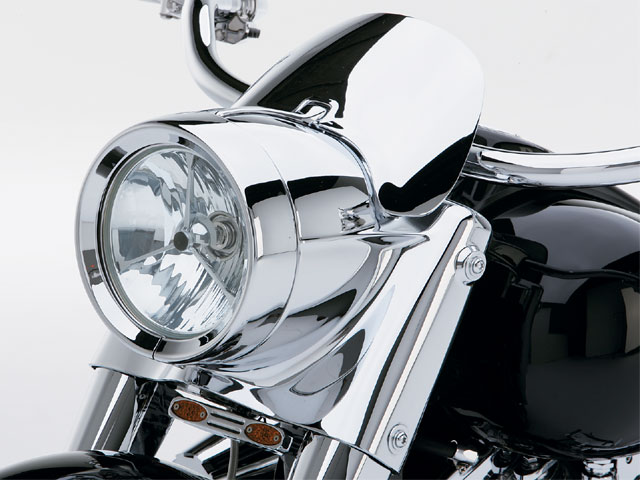 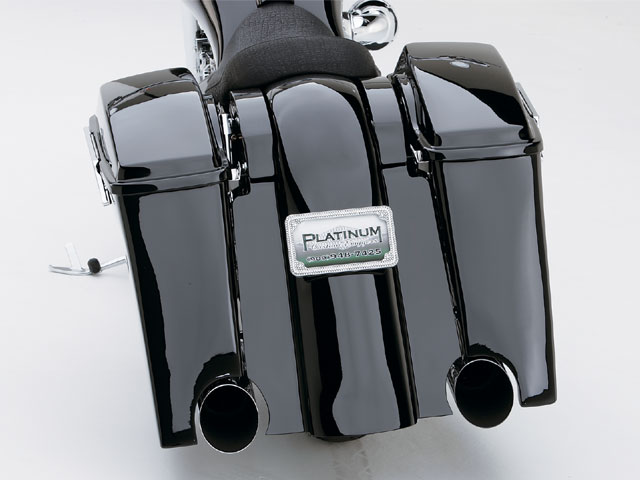 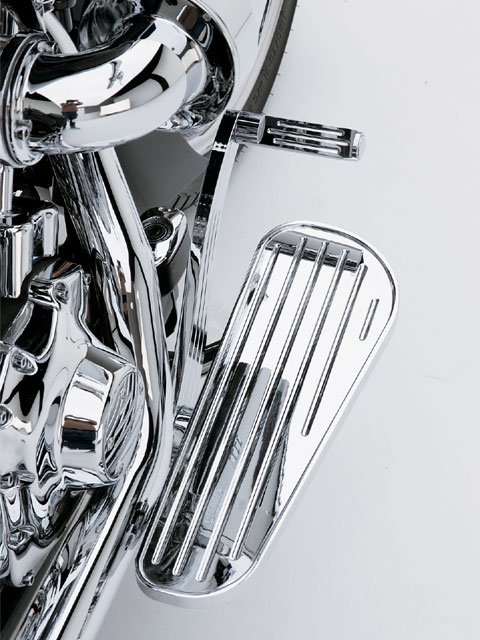 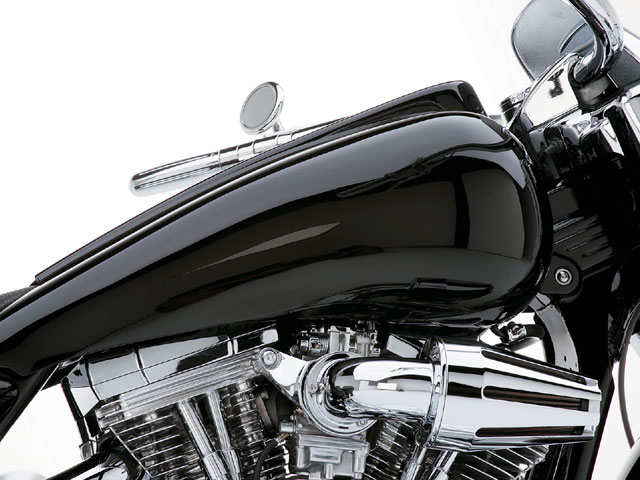 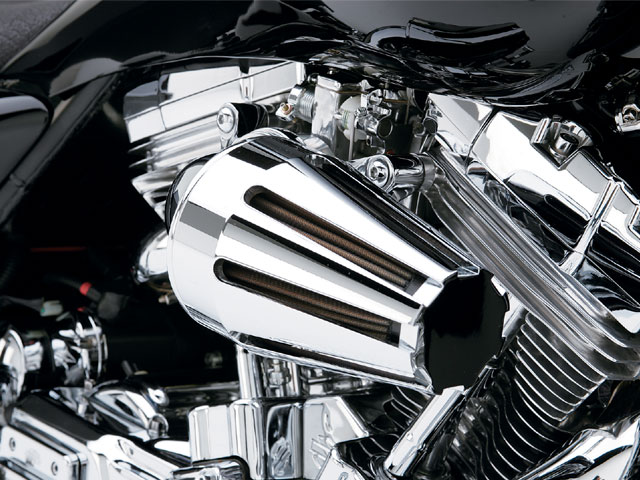 In early 2006, Tony Parker came to Jeff Delisle, of Delisle Custom Products, with thoughts of customizing a new Harley Road King. The two had worked together before on three previous bike builds, although taking on a bagger project was a little different from what Jeff was accustomed to building. As mostly everything on the stock bike would be taken off and either redone or scrapped, the only requirement Jeff had was a carbureted bike. This was to simplify the future wiring and electronics needed to get the bike going.

Immediately after picking up the Road King from the dealer, Tony rode it to Bill Chambers Racing to get the motor pumped up from an anemic 60-odd hp to something more befitting the King of the Road. After tearing down the top end of the motor, the first order of business was a valve and port job to improve airflow. A set of big-bore cylinders was added and filled with high-compression Ross pistons, taking the total displacement out to 95ci. Getting the most from the headwork was handled by a set of S&S; cams connected to the top end through Crane pushrods and H-D lifters. Once reassembled, a 42mm Mikuni carburetor that breathes through a horizontally mounted Ness unit was bolted between the heads. Ignition of the mixture is handled by a Dyna electronic ignition, with spent gasses exiting Vance & Hines headers connected to Bassani mufflers. Post motor mods, the Twinkie puts out 102 hp and 108 lb-ft of torque.

During the motor build, Jeff got to work ordering the Perse lower legs to slip through the H-D triple-trees, along with some five-spoke PM wheels. Both the front 21-incher and the rear 18 were shod in sticky, low-profile Metzeler rubber. For braking duties, serious dual 13-inch floating rotors and chrome calipers were sourced from QTM/Brembo. QTM is the exclusive distributor of Brembo brakes and rotors for the cruiser market in the U.S. A single 11-1/2-inch rotor/caliper combo sits out back. Air-adjustable Platinum Air Ride shocks control all the bumps in the road while being able to adjust the height of the rear end of the bike.

Since Tony wanted the bike to possess a low and sleek stance, Jeff started first by setting up the suspension. Part of the look comes from a frontend that’s 2-1/2 inches shorter than the original stock forks. Sitting on top of the H-D risers is a set of Wild-One bars that Jeff reworked with wires, clutch, and brake lines concealed within the handlebars. A single blacked-out digital gauge sits within a sleek dash that extends throughout the length of the Native Custom Baggers gas tank. Keeping the stretched split-tail tank clean is a single right-side recessed gas cap; the whole black-on-black motif looks like liquid ink, thanks to the deep gloss-black paint.

Both of the RK’s fenders were pitched in favor of custom units. Up front, Jeff got started cutting and welding a Milwaukee Iron fender, turning it into a sleek tire-hugging cover. The rear full-length fender was originally a stock Road King fender that Native Custom Baggers massaged to flow perfectly with the exhaust-wrapping Ness saddlebag extensions. Paul Richards of Native also made the filler panels (which also contain recessed LEDs) between the bags and rear fender. Connecting the blackness between the rear fender and the tank is a custom-made seat by Rich Everding. He started by forming and cutting a fiberglass seat pan, covering it in foam and gel, then finished off the look with black sharkskin.

Once most of the hard parts were figured out, the daunting task of wiring up the new King was left to Jeff. He moved the coil; hid the pump for the air suspension; and concealed all of the various wires, black boxes, and switches. About the only thing left to complete the bike was the addition of Accutronix foot controls that matched the horizontal-milled look of the covers on the motor, primary, transmission, and saddlebag latches.

This slick, low, mean Road King went on to win over spectators and judges alike at a large SoCal bike show. Tony’s unique RK took First Place in the manufactured custom class, making the long wait and money invested worth the work. Besides that, he’s sure to find his bike in a sea of stock-looking H-Ds.

100% Made in U.S.A. Spark Plug Wires. Sumax with Taylor developed the STREETHUNDER Wires to deliver great performance at an […]

Objects on bike are cooler than they appear. Courtesy of Drag Specialties If you’ve dinged the mirrors on your bagger, […]