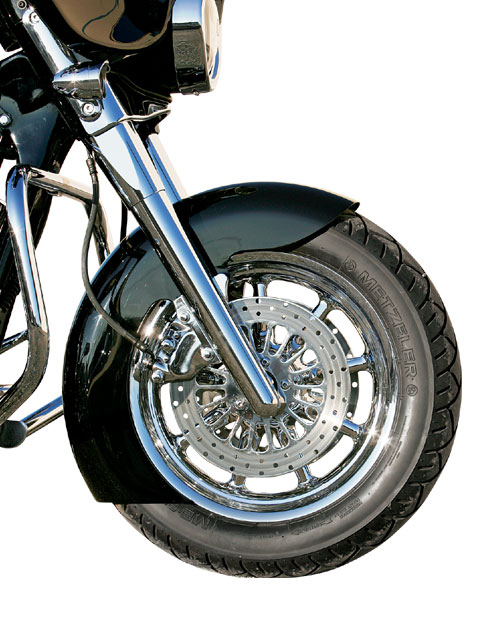 Even though Vince and Cathy stuck with the stock 16-inch wheels, the frontend was dressed up with a pair of Perse Performance lower legs and a Nasi front fender. The combination of the stretched tank and low profile dash adds to the streamlined look of the rear section Jim designed. 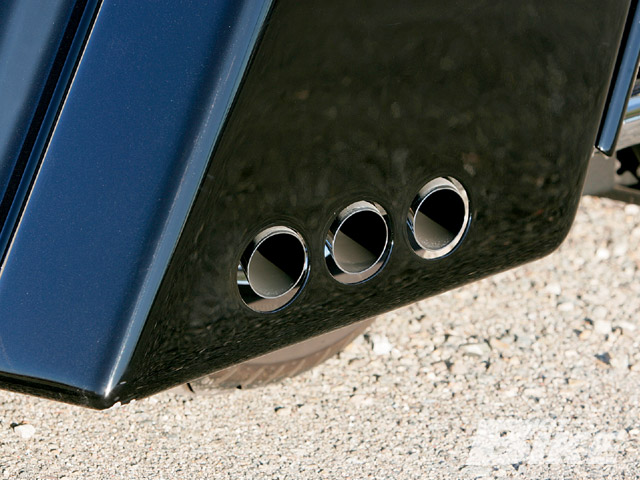 To show off his Triple Shot exhaust, Jim designed his saddlebags with cut outs for the muffler tips. 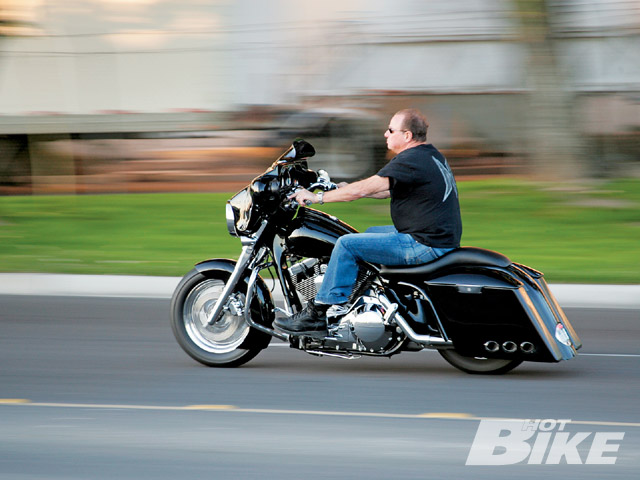 Everyone has heard the saying, “Men are from Mars and Women are from Venus?” Despite the fact that it is pretty damned annoying, the saying is true. More often than not men and women don’t share the same interests. You want to sit in your recliner and watch TV, while she wants to go out dancing. But, once in a while, two people find that they share a love for the same thing. Vince and Cathy Torre are two of those lucky people that share a common passion; motorcycle riding. Thanks to their friends at Jim Nasi Customs (JNC), they ride in style, and Cathy no longer has to ride on the back of Vince’s cycle.

Vince has always enjoyed fast moving vehicles and the outdoors. He used to get his excitement by boating. Eventually, Vince got bored with watersports and wanted to find something else to do on the weekends. Some friends of his recommended that he try riding a motorcycle. Vince quickly fell in love with riding and bought his first Softail in 1985 and he has been riding ever since.

It was 16 years later that Vince met the love of his life, Cathy. Cathy was happy to ride on the back of Vince’s bike. Together Vince and Cathy rode everywhere and they both loved it.

One day, while riding through Brian Head, Utah, Cathy saw a few women riding Street Glides. She decided to go talk to them. She asked them how they liked riding on their own and how hard it was to handle a big bike. They told her they loved it and that she should get the biggest bike possible.

It was at that point that Cathy decided she wanted her own bike, and being a good and smart husband Vince was more than happy to oblige. Cathy got her own ’06 Street Glide and then went to school to learn how to properly ride. Once Cathy was confident on the bike, she and Vince quickly became weekend warriors, riding their motorcycles all over, side by side.

Eventually Vince and Cathy got to talking about making some upgrades to her Street Glide. A few years back, Vince had purchased an Afterlife bike from JNC and really appreciated Jim’s high quality craftsmanship. One day while attending the Laughlin River Run they ran into Jim, who was talking about a bagger kit he was working on. With a great appreciation for Jim’s style, they let Jim have his way with Cathy’s bike.

Jim had been working on a Bagger Series Kit for ’97-08 H-D baggers that didn’t require any modifications. As Jim states, “if you can change the oil in a car, you can do the kit.” The kit includes a steel stretched rear fender, stretched bags, radius lids, new side covers, top rail covers, a slip-on “triple shot” exhaust system and a billet license plate mount with LED taillight and turn signals.

Jim did all of the conversion kit work to Cathy’s Street Glide, but still wasn’t finished. He stretched the gas tank and gave the bike a custom low-profile dash. He also changed out the lower front legs and installed a Legend Air Ride suspension system. This gave Cathy a smoother ride and made the bike sit up higher. When all was said and done, Vince and Cathy were very happy with the modifications.

J&P Cycles’ Anamosa, Iowa location becomes the largest motorcycle aftermarket store in the world during the weekend of June 24-25, […]

Thousands came out to downtown Billings, Montana to take in all the 2015 GEICO Hot Bike Tour had to offer. […]