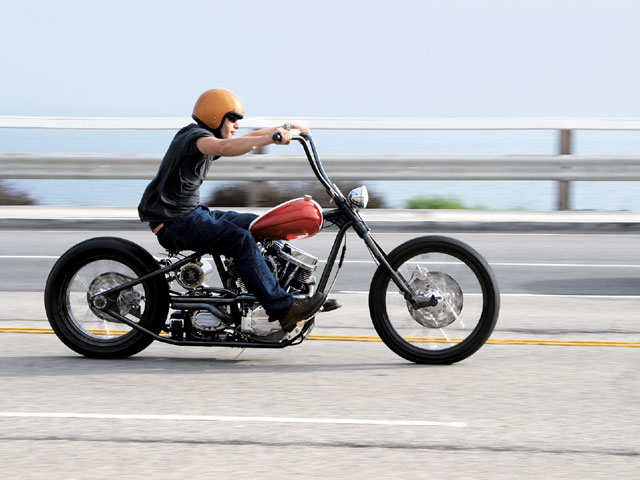 My first introduction to Satya Kraus occurred a couple of years ago while hanging around the set of the Build or Bust television show. His task was to build a custom bike in 30 days. Notice that I said “build,” as in fabricate, not bolt on parts from a catalog. It’s not as easy as it seems, requiring metalwork and welding skills, forethought, knowing what can and can’t be done, and so forth. In Satya’s case, he had Johnny Goodson acting as a mentor (not to mention building his own bike at the same time). Russ Mitchell was around to give advice while teaming up with producer Scott Gillen to alternately humor, deride, and scare the young builder. Many of the show’s contestants fail, leaving with nothing more than a great experience, 15 minutes of fame, and a bus ticket out of L.A.

Satya finished his bike in the allotted timeframe and rode home to the Northern California town of Cazadero. I was happy for him and figured he probably went back to his computer-related career. A year later, while attending a bike show in Long Beach, I spotted one of the most original bikes I’d seen in years. It was understated, uninflated, and uncovered: a panhead rigid with a leafspring fork and seat suspension, forks with no triple-trees, see-through oil bag, metal covered in gun blue-all presented with amazing attention to detail. With each navigation around the bike, I discovered more and more innovation and style. A tag on the leverless bars read “Kraus Engineering.” I’d never heard of that outfit. I looked around for the mystery builder to no avail, then happened to bump into Satya and his beautiful wife, Tiana. Cutting to the punchline, the orange-pearl pan was built by Satya.

It was a surprising moment, as I had no idea that this young-looking “amateur” TV builder had such skills. We immediately set up the photo shoot, since I knew someone else would jump at the opportunity to photograph this bike. Satya told me about the trial and error associated with getting the hardened spring-steel leafsprings to operate perfectly. The spring rate of the suspension can be adjusted by changing the number of leaves. Designs for the “Kringer” (as he calls it) were drawn by hand for the unique suspension that attaches to what resemble bicycle forks. After going through the neck, the handlebars attach without the use of the traditional triple-tree. A handmade headlight bracket was fabricated and attached to the fork, which turns with the bars. There are no levers on the handlebars; instead, the clutch is actuated by a left-hand twist mechanism, while the front brake operates off the right throttle control. As you roll the grip back, it increases the rpm like a traditional throttle setup, but after returning to idle position, rolling the grip forward engages the front brake. Sounds easy, but the ramp ratios in the throttle control had to be precisely worked out to get the package to work just right.

Framing the ’65 replica electric-start, 80-inch panhead is a modified straightleg, gooseneck frame with 38 degrees of rake. The gun-blue finish started with hand polishing the whole frame. After cleaning and degreasing, Satya applied his special mix of chemical blue. Two or three coats later, the frame was ready for a heavy coat of wax. Most of the black-appearing parts were given this cool-looking treatment, including the hand-bent over/under exhaust pipes with brass inserts in the end. Brass was also utilized for the foot controls, master cylinder cover, and the caps for the oil and gas tanks. Speaking of the oil tank, it’s a stainless-steel reservoir with a see-through port on the right side. Oil is fed to the externally mounted oil filter via braided lines.

Above the oil filter is a unique taillight fabricated from a light bulb found in Satya’s kitchen. He took the whole design of the spotlight and made it work for a bike. He cut the glass lens off the light, then fabbed a tapered frame for it out of solid 2-1/2-inch aluminum, fastening the glass lens to the new aluminum frame. He then turned and threaded a brass base that looks like the screw part of a light bulb, shoved a red LED bulb in there, and put it back together. A lot of work, but definitely original.

So what’s up with the “30:60” moniker? While Satya was fabricating all the crazy parts on this bike, the angles of everything kept consistently coming up as 30 degrees or 60 degrees, depending on the vertical or horizontal reference point-everything from the bend in the fork legs on the frontend to the handle bars, the tapers on the grips, parts of the seat mechanism, the taper on the taillight, you name it. For some reason, everything just looked and worked great at 30 and 60. The name 30:60 seemed fitting. One more thing: Satya is pronounced “sotcha.”

These are the components that make up the LegUp system that fits H-D Touring models ($2,995). Also included in the […]

Adhering to boundaries isn’t something Confederate Motorcycles of Birmingham, Alabama, can be linked to, not in the slightest. Ever since […]

The Reactor Starkline Wheel Charleston, SC- WanaRyd Motorcycle is pleased to announce the introduction of The Reactor, a unique 6-spoke […]