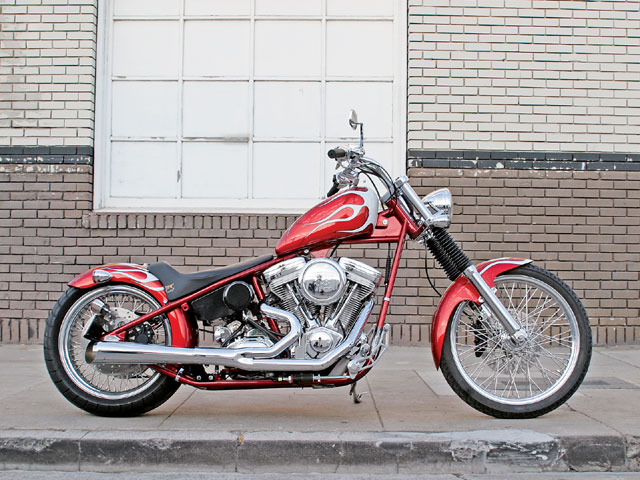 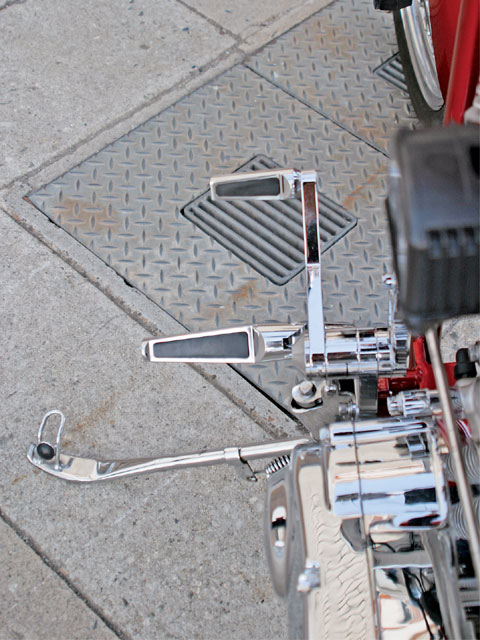 When the HOT BIKE headquarters received the BMC Hooligan 541 for a road test, I ran-not casually strolled-to the garage to gaze upon the incredible beauty of what I had been expecting for some time. The fluorescent bulbs from the rafters in the garage beamed down to accentuate the sleek lines of the red frame matched by the stellar red base coat. It meshed with an intricately placed tribal flame design starting at the front fender, throughout the tank, and back to the rear fender. The motor sparkled. The pipes glistened. I stood there, mouth open, unaware of the saliva slowly drooling down my chin onto the floor. This Hooligan I had heard so much about from the rest of the staff had become my Red Rider BB gun. I had to ride it! The expression on my face spoke volumes of the exact emotion I was experiencing at that very moment: Anticipation.

I waited for the chance to hop on board and take the Hooligan out for a spin. Then my boss walked into my office and before he could even utter the words, I knew that my time had come. I jumped in the saddle and turned the key, pulled back on the throttle, and grabbed the front brake lever to lock up the four-piston Brembo caliper with all of the fuerte I could muster. Then I eased off the clutch and spun the 18-inch, 60-spoke Ride Wright wheel covered in 200mm Metzeler rubber while my feet stayed planted, raring to go. I let go of the brake and flew down the asphalt like a bat out of you know where (south of Heaven). Then it hit me while I warped into a different dimension like the DeLorean in Back to the Future: This is why Big Mike named this beast the Hooligan. You could get into a bit of good old-fashioned mischief…the fun kind of mischief, of course.

The next week the HOT BIKE staff was scheduled to go for a ride in the San Bernardino Mountains up to Big Bear, California, for the weekend. I rode the BMC. The Hooligan sports a rigid frame, but it wasn’t backbreaking, since the seat was more than comfortable and made for a cushier ride than other hardtails I’d been aboard. It also helped that the 3.4-gallon classic peanut tank typically lasted for approximately 80-100 miles until the fuel was sucked dry, I had plenty of opportunities to rest my bones at gas stops. Approaching the 79th mile, the pins and needles effect was present but not unbearable. However, we were riding on some of the bumpiest freeways in Southern California as we made our way up to the base of the mountain, and once we hit the smoother asphalt of the twisty mountain trek, I could have gone for miles. As we made our way toward the peak of the mountain, the Hooligan hugged the tight 25 mph corners and accelerated into the straight-aways with ease due to the 88-inch RevTech power plant and five-speed RevTech tranny. I loved how the Hooligan handled in the sharp turns. With 35 degrees of rake and 2 inch over forks, it’s got slight chopper lines, but this baby was in no way “too big” for my 5-feet, 10-inch tall, 175-pound (pure muscle of course) frame. I felt comfortable in that I didn’t have to reach my legs toward the forward controls, which gave me the confidence to throw it down in the turns without grinding the pegs, frame tubes, or pipes.

One of the most noticeable factors of the Hooligan are the black dirt-bike style fork boots which fit nicely in between the lower fork legs and the bottom of the triple lower triple tree. It is a nice little addition that makes this chop unique.

When we arrived at our lodge in Big Bear, we unpacked our stuff and relaxed for a while, but after a few hours all I could think about was getting back on the bike. And when we left the mountain and got back to the homestead, the inevitable happened and the Hooligan and I had to part ways, but I was honored to have ridden this chop and with a price tag of $17,995, I might be in the market for a new purchase really soon.

However, I won’t be purchasing this specific bike, because Big Mike has a big heart, and he gave this beauty away to some lucky participant at the Grand National Bike Show in San Francisco this past October.

Describe yourself in three words. Passionate, dedicated, sarcastic—probably in that order. Three things you love. My family, my dog, and […]

The 2nd and 3rd installments documenting the makeover of a 1200 Sportster purchased off Craigslist on the cheap. Our ’97 […]

The Ever-Changing Face of Moto Media

Jardine Highway Bars for all varieties of V-Twins