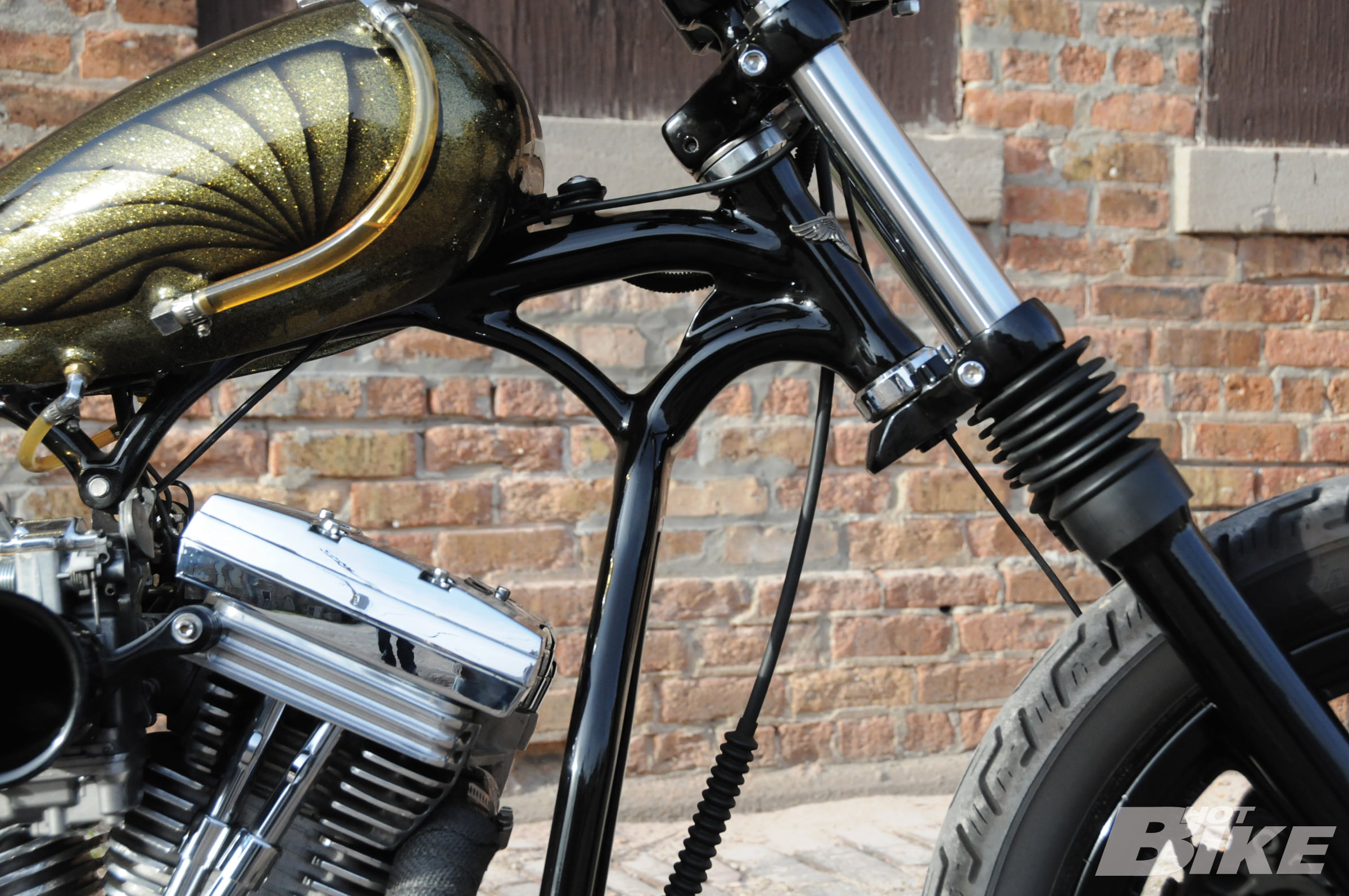 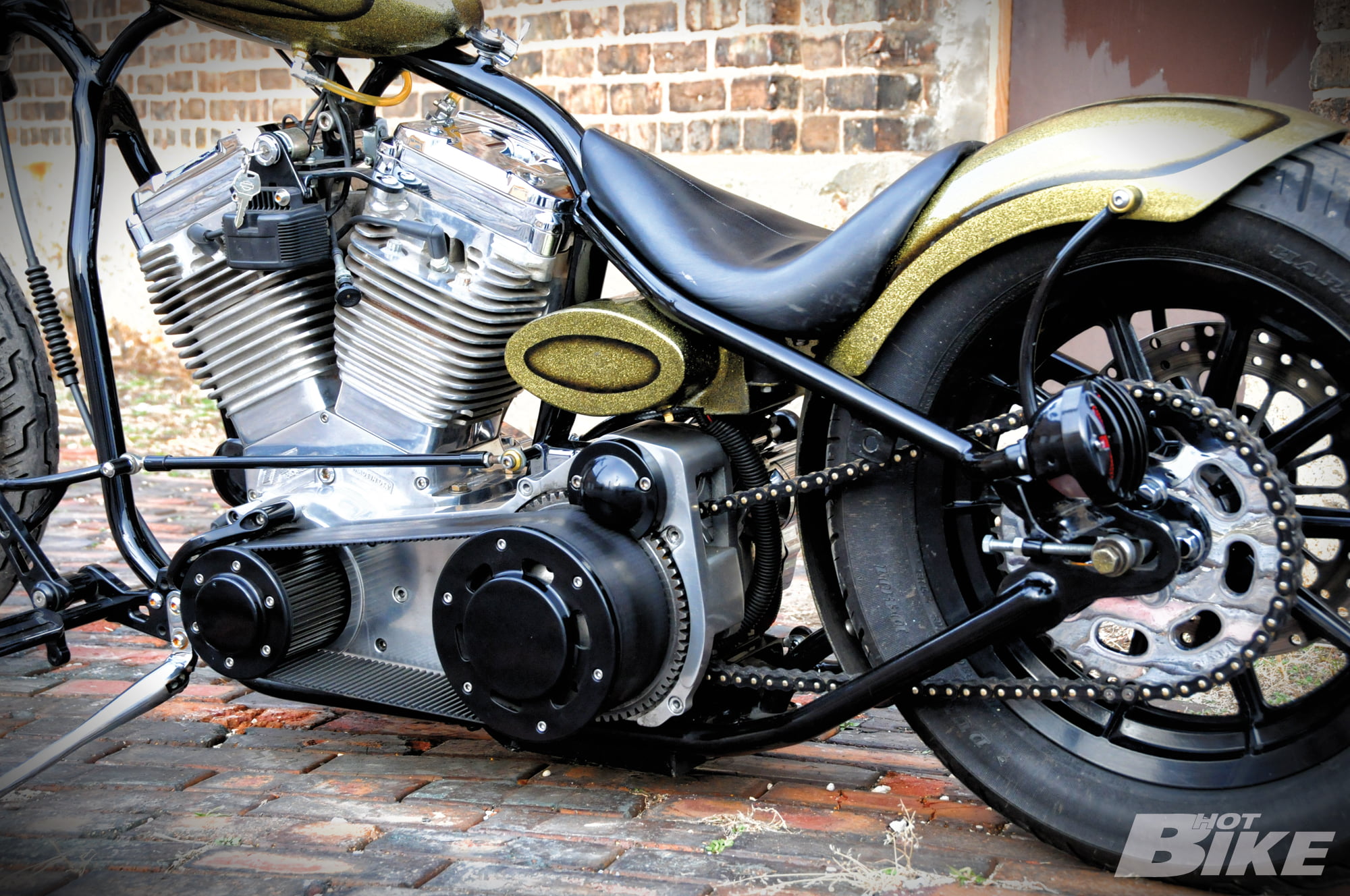 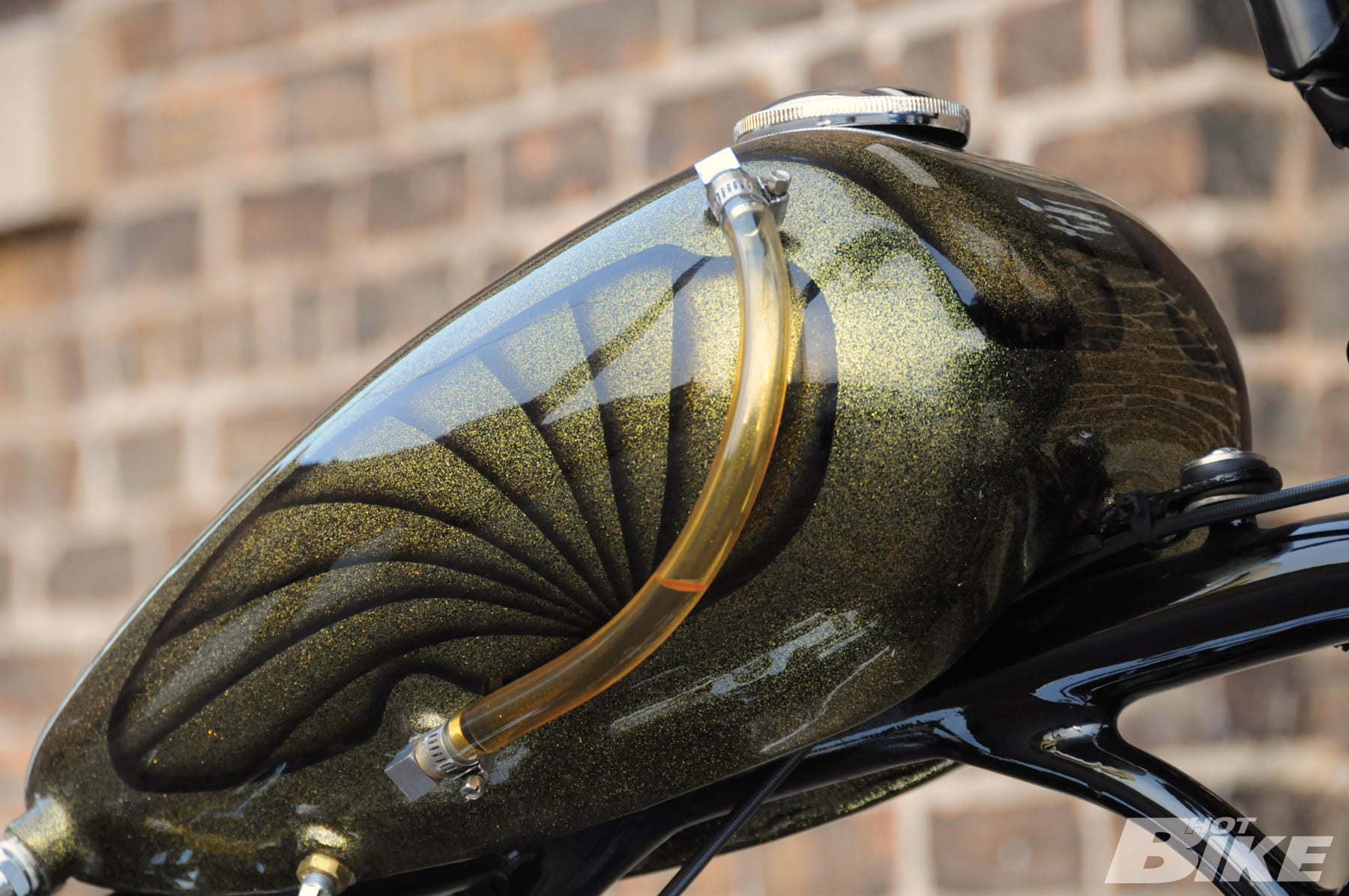 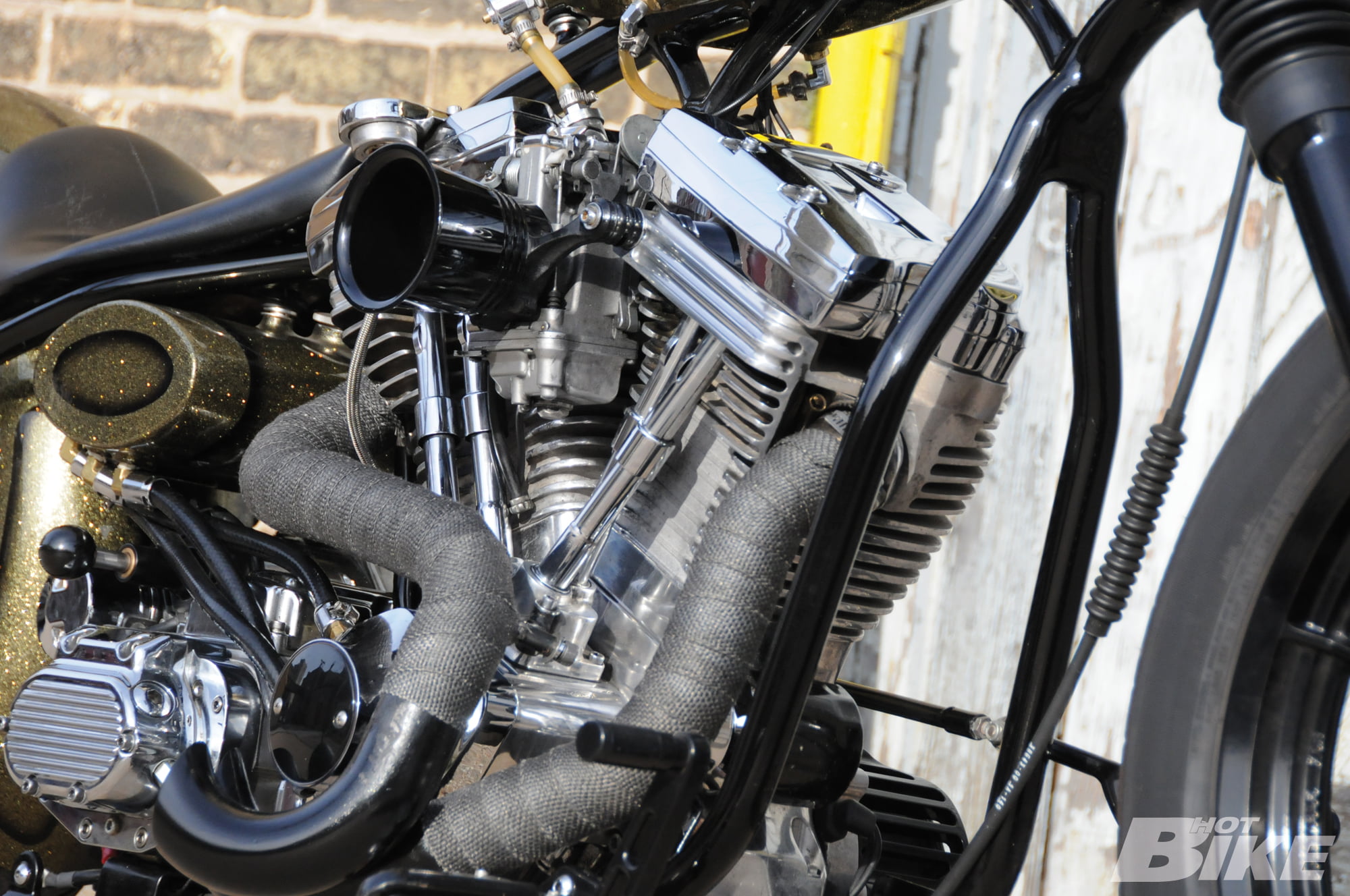 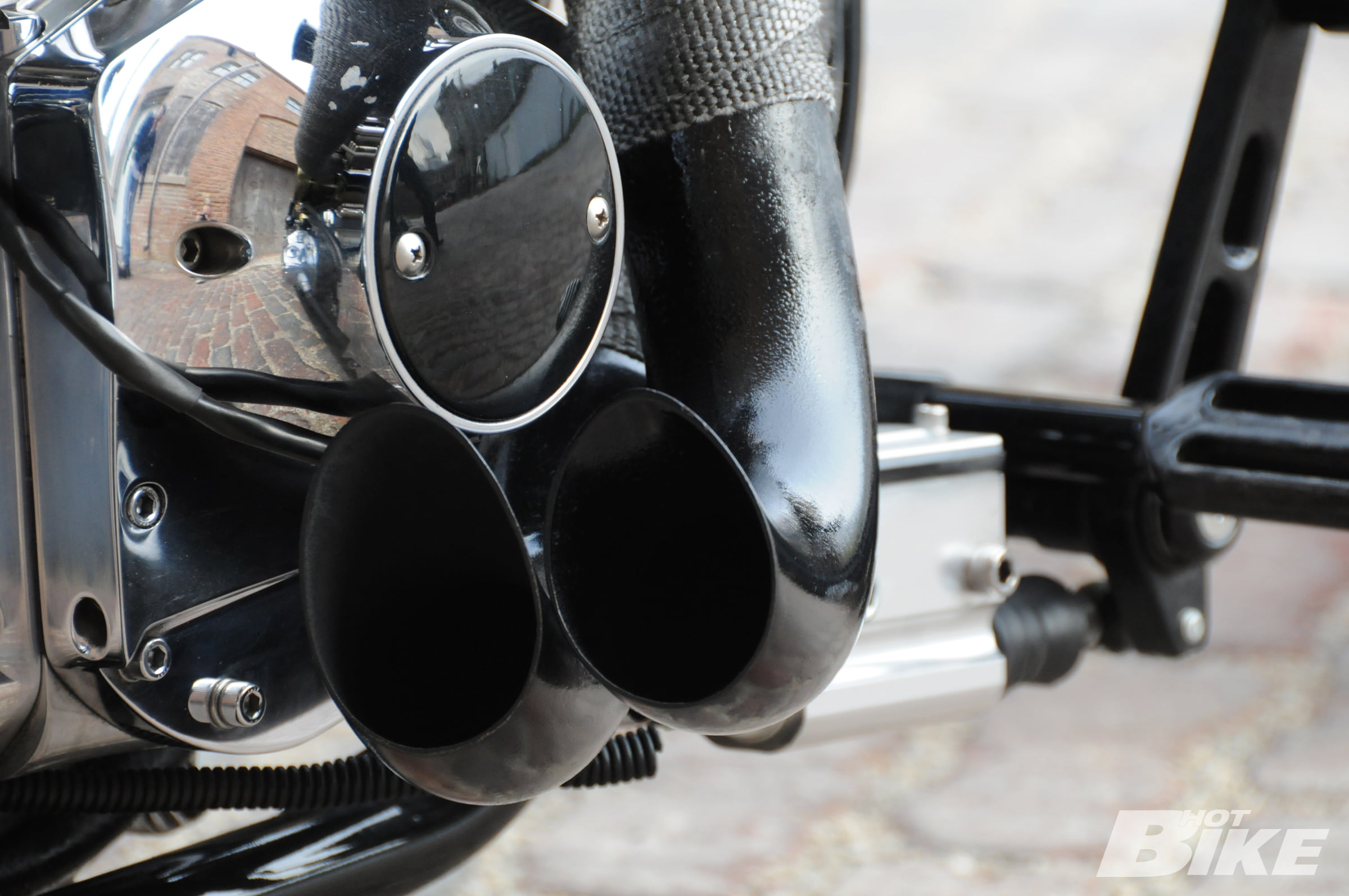 In all fairness, Mike Rabideau’s stripping career is limited to tearing down motorcycles, as far as I know. In fact, he had enough extra parts lying around his shop, Majik Mike Designs, to start this scratch-built show winner seen before you.

This bike came about because of Chopperfest 5 in Martin, Michigan. Harley-Davidson Express was throwing the Michigan Mafia Biker Build-Off during the event. The contestants were 10 builders that the promoters referred to as The Next Generation of Bike Builders. Steve and Mike were the only out-of-staters competing.

The contest had one major rule: the bikes had to be built for less than $10,000. You can do a lot for less money when you’ve got a whole bunch of misfit toys left from other projects collecting cobwebs around your shop. This is why Mike got A-bomb level bang for minimal buck. Even the 124-inch TP motor and its primary were dust collectors waiting to switch jobs to the beating heart of some project.

What Mike lacked was a frame, though. Steve wasn’t immune to parts hoarding, either, fortunately. His pack-ratting became Mike’s treasure when Mike forked over three-grand for a frame Steve had lying around his shop.

What started out as a parts pile turned into Mike’s favorite bike to date. The downside of leftover parts is fitting a bunch of random shit together that as often as not needs an Egyptian pyramid’s worth of manpower to make it all fit right. In this case, frame and motor had irreconcilable differences until Mike busted out the tools and, um, reconciled them. See, the mill was too big for the Paughco wishbone chassis. Mike recalls, “I cut the neck completely off the frame and moved it forward an inch and a half, keeping the same height and rake. The most difficult part was getting the radius bend I needed to create the gooseneck look on the down tube. I wanted to keep it short so I could still have the wishbone look. It took us four pieces and over two hours just to get the bend I was looking for. I had to make my own top motor mount and gusset after that. I also dropped the seat an inch and a half so I could sit lower in in the bike.” He likes the look of drop seat frames because the rider looks like he is sitting in the bike rather than on top of the bike. “That’s the look I was going for, so I cut the seat rails loose and used a ratchet strap to pull the rails down evenly,” Mike says. “When they were where I wanted them, I welded them in place.” All of that surgery ate up nine hours the first day of building. After working on the frame and getting it how he wanted, the rest of the chop fell together. He needed his own mounts to make some of the parts fit and as miraculous as duct tape is, Mike felt welding the mounts from round stock was probably a better route to take.

There was still a ripple effect from all of that cutting and welding, though. Mike had to shave the original battery box because it was hitting the starter. When that resulted in a battery box too short to do its original job, it became the breaker box and storage compartment (which usually holds a pair of gloves and a bandana). In the end he was forced to make a battery box and weld mounts under the transmission to solve the problem.

After customizing the frame the way Mike did, buying a seat off the rack wouldn’t do the bike justice in his eyes—creating it himself was the only option. It combines a fiberglass pan with spray foam padding covered with a $20 jacket Mike scooped up from the Salvation Army.

The gas tank needs a bit of a shout-out in its own right. Mike scored a small bobber gas bag for cheap onto which he welded a sight gauge. Being as the tank is only 2.2 gallons, he relocated a new petcock to the lowest part in order to add a few miles between fuel stops.

Time shrank as the chopper grew. Luckily, Mike and Steve finished both bikes headed off to Michigan just in time. Come Saturday night, the judging began with Mike in the back row of the 10 builders on stage: “After they announced Third Place and Second Place winners, I didn’t think I was going to win anything. Then the anticipation set in as the announcer hyped up the winner of the build-off.” A slight pause and stare later, it dawned on Mike that he’d conquered the show. “He handed me the microphone and said I was the new godfather of the Michigan Mafia.” Mike says. “I started sweating and was speechless when I received the award, but I stepped forward and said a few words thanking everybody for the opportunity.”

That’s also how Majik Mike got his stage name. Even though no one threw singles on the stage during his routine, he also didn’t have to dance around a brass pole in his underwear to win, for which we’re all eternally grateful.

Many styles dictate bikes. Maybe you’re into period-correct choppers, with every last slotted screw and cast-aluminum part eBay’d onto your […]

For His Service To Our Country – 1975 Harley-Davidson Super Glide

This is the 1975 Super Glide frontend that SPS in Ohio sent me. While the frontend is usable, I didn’t […]

Born Free 4 2012: Featuring Save your Money for Tires Video