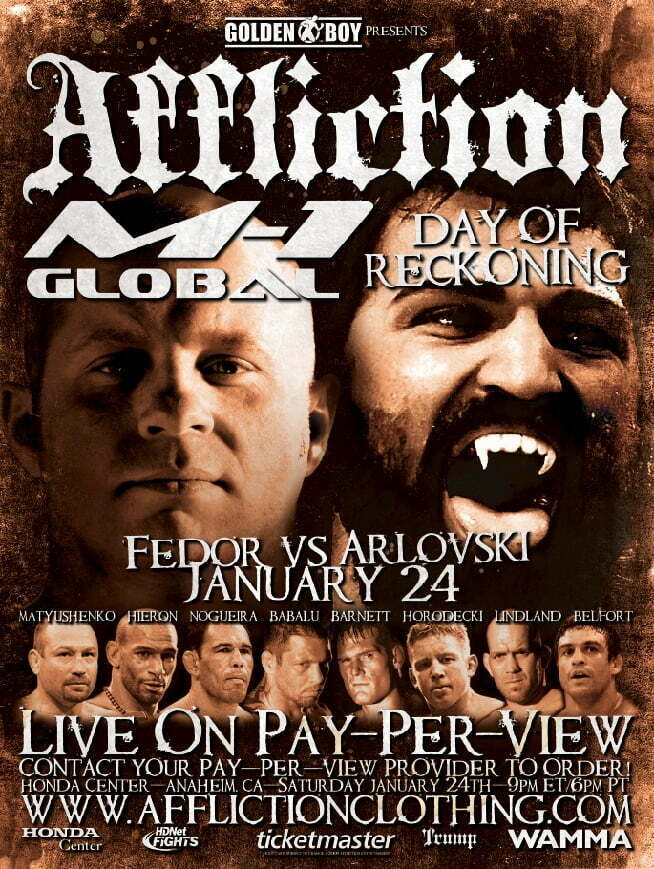 Not only did we see some great fights in the ring, but heavy metal rockers, Megadeath, kept the crowd hyped in between fights.

Well, after the success of it’s first event, Affliction is back again with yet another night of face busting fight cards, Affliction Day of Reckoning. Once again Fedor is billed in the main event as he’s scheduled to take on Andrei Arlovsk on Saturday, January 24, at the Honda Center in Anaheim. Both of these guys have been know to dominate their opponents and this is going to be one hell of a brawl. The rest of the cards are filled with pwoerhouse names as well like Babalu, Barnett, Lindland and Noguiera (Rogério not his brother Rodrigo).

If you live in the Socal area and have never been to an MMA event I would definitely try and get tickets you won’t regret it. Hopefully I can score some tickets again, otherwise I will absolutely be watching this battle on pay-per-view.

Custom 1963 Harley-Davidson FL Photo: Jake Clifford It started with an Instagram post I saw about Ivan Snodgrass selling a […]

The drum brakes of the past don’t work quite as well as today’s brakes, but they get the job done. […]

Ron Finch has been referred to as “The Legend”-not only as a builder of custom motorcycles, but also as an […]

The Heat is on at Saddlemen!