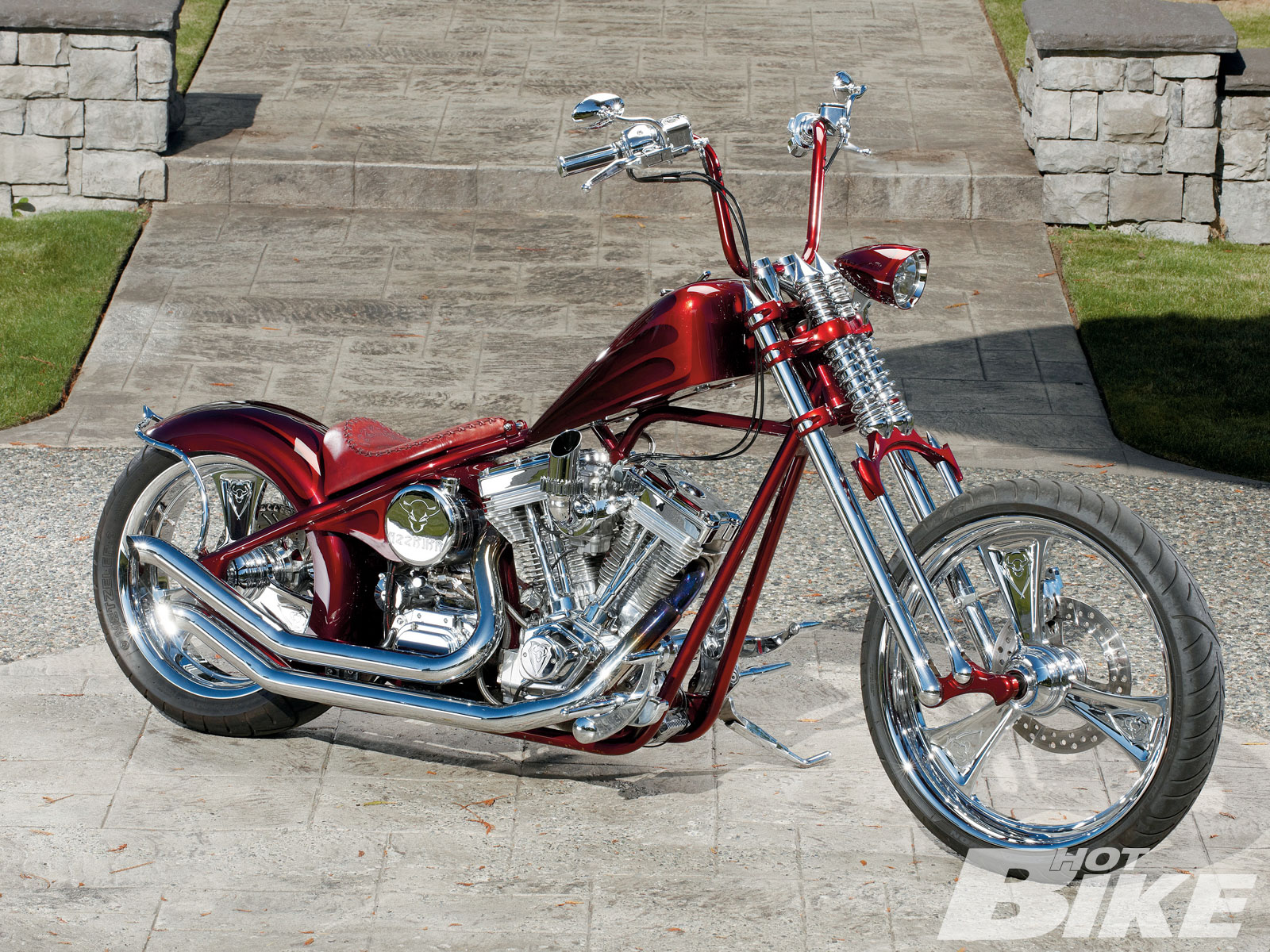 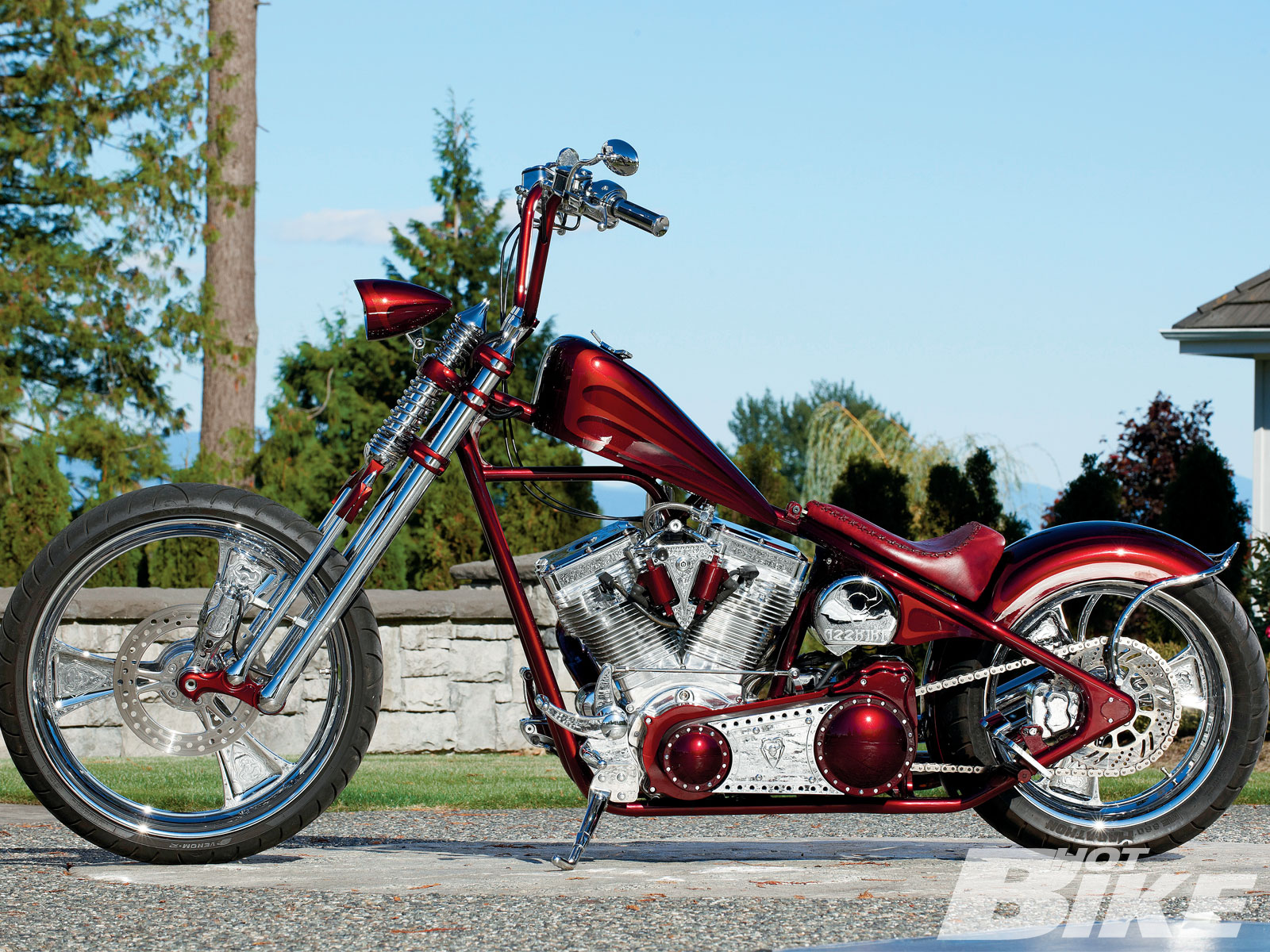 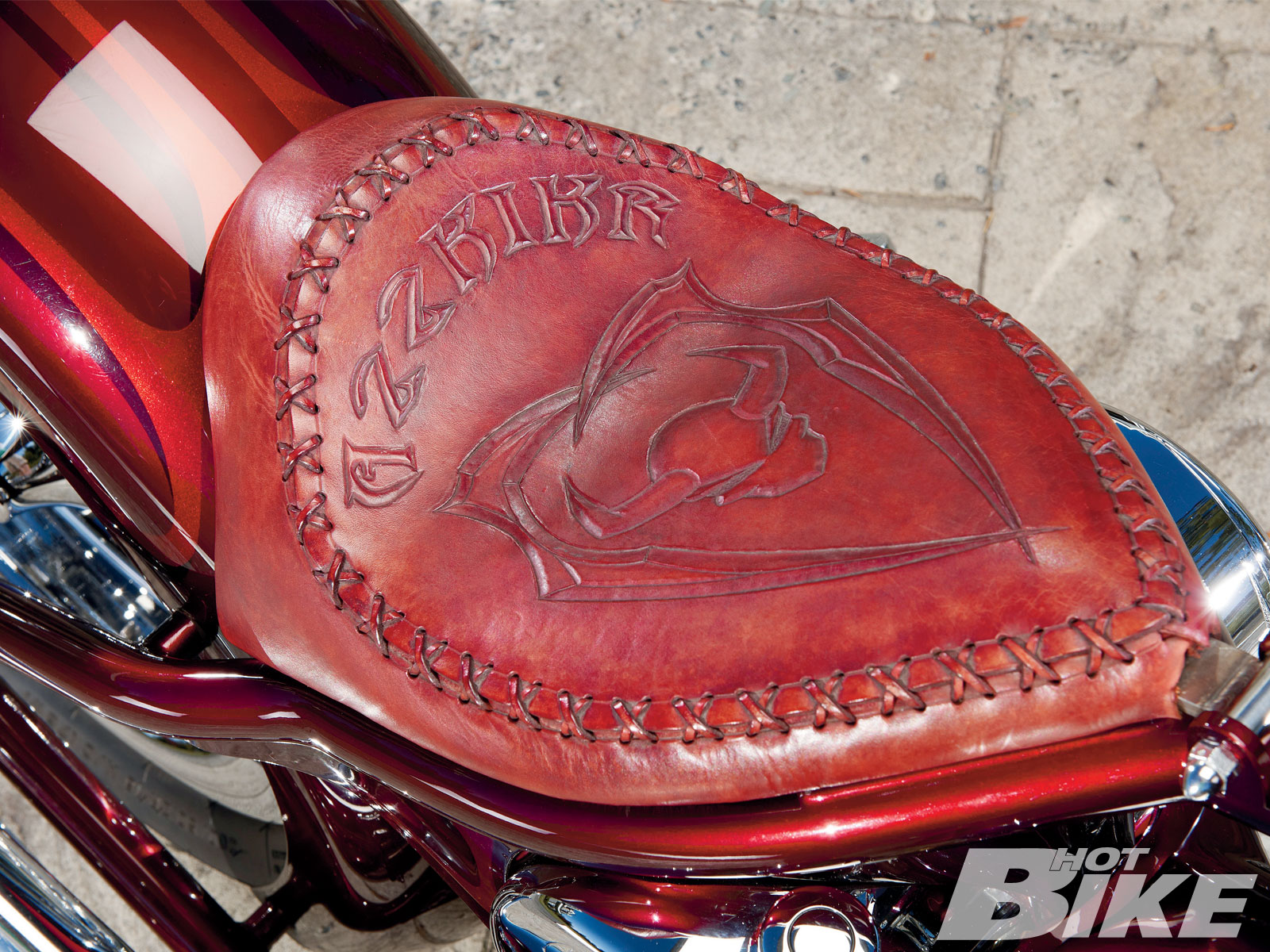 While it looks like a rigid, there’s a little bit of suspension in the rear in the form of an air bag kit that’s mounted between the frame and seat. 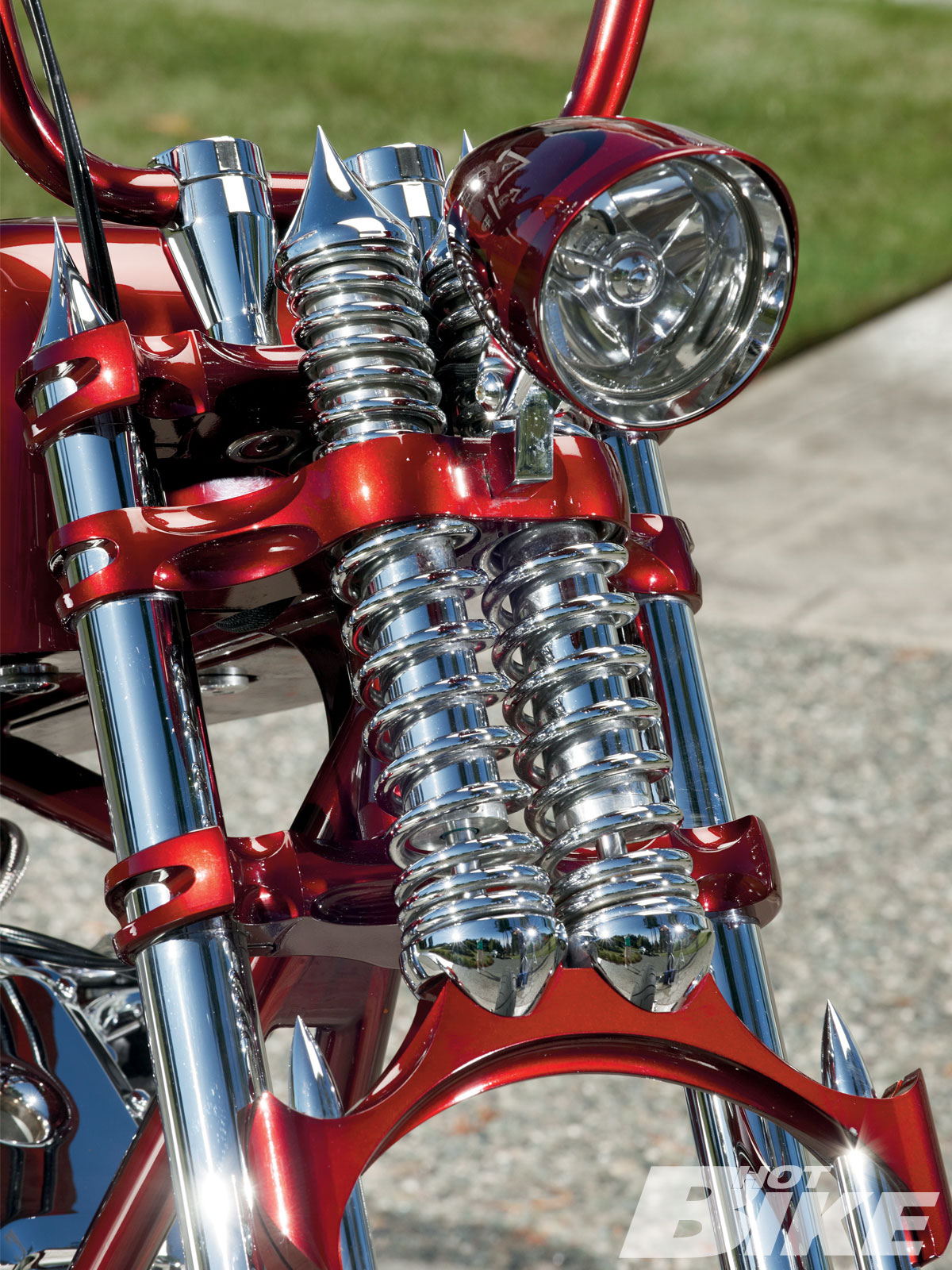 The American Suspension Dragon Slayer springer looks really good with the mix of chrome and red. 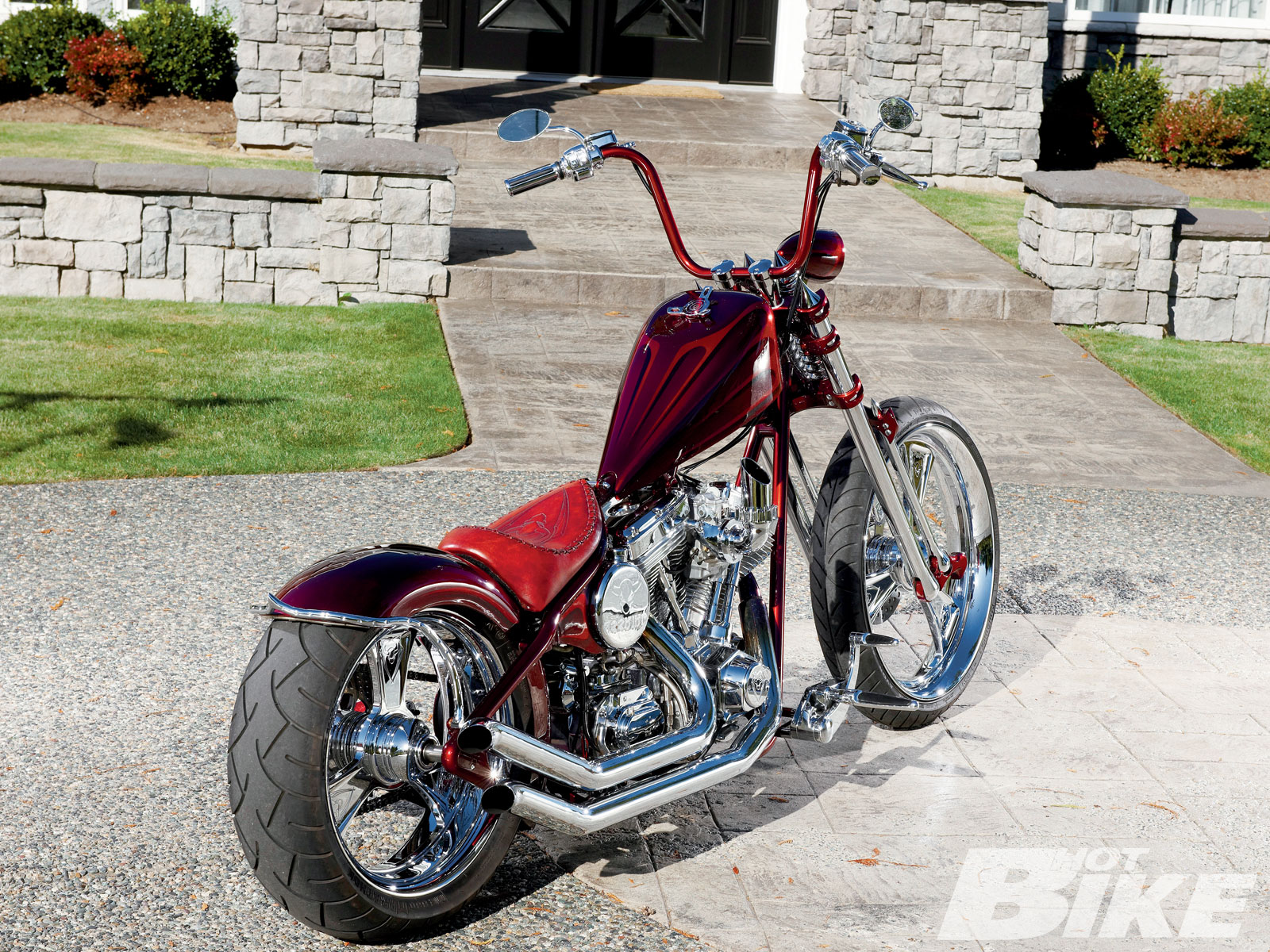 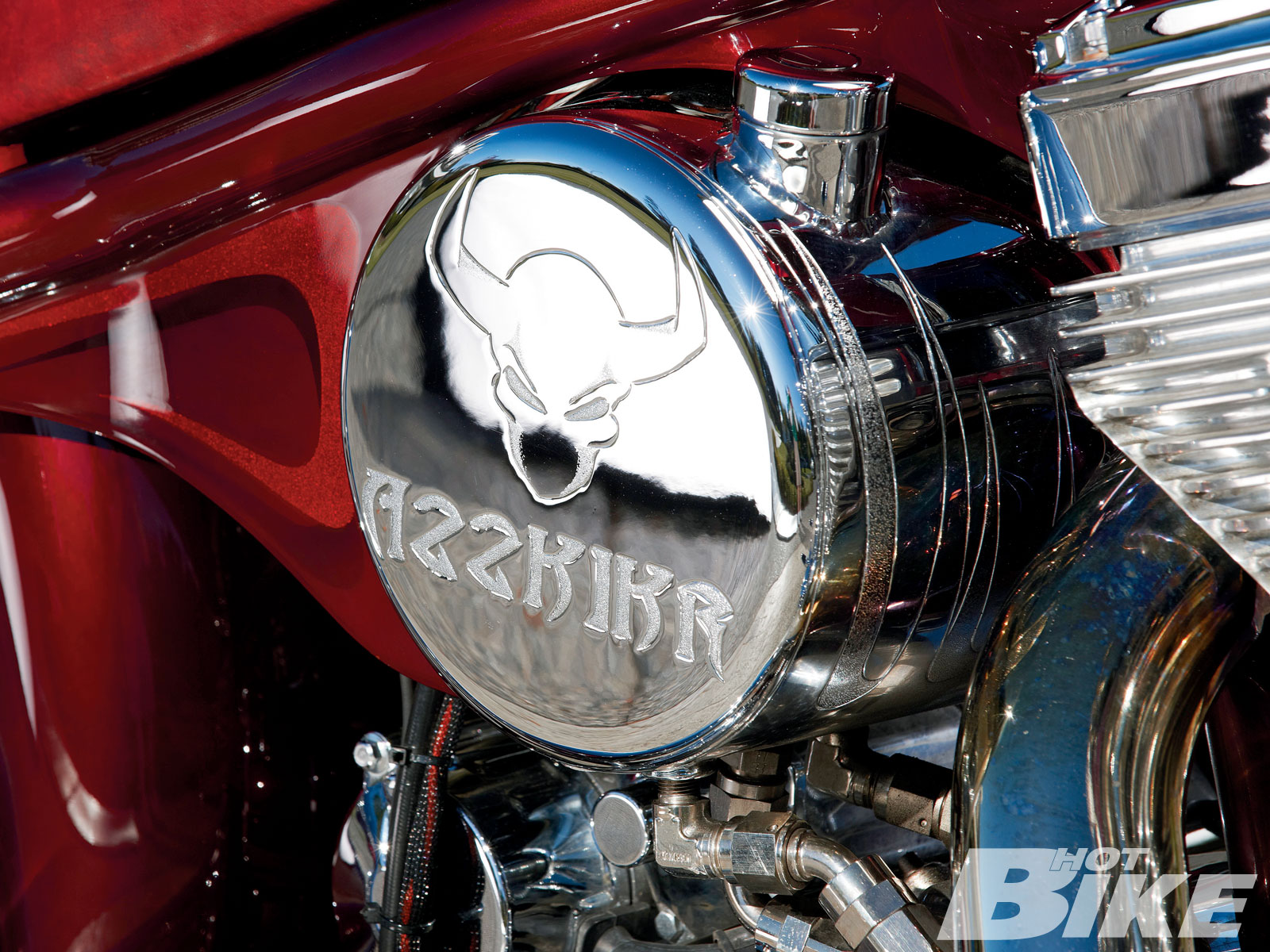 You won’t miss who built this bike with the Azzkikr logos engraved all over it. 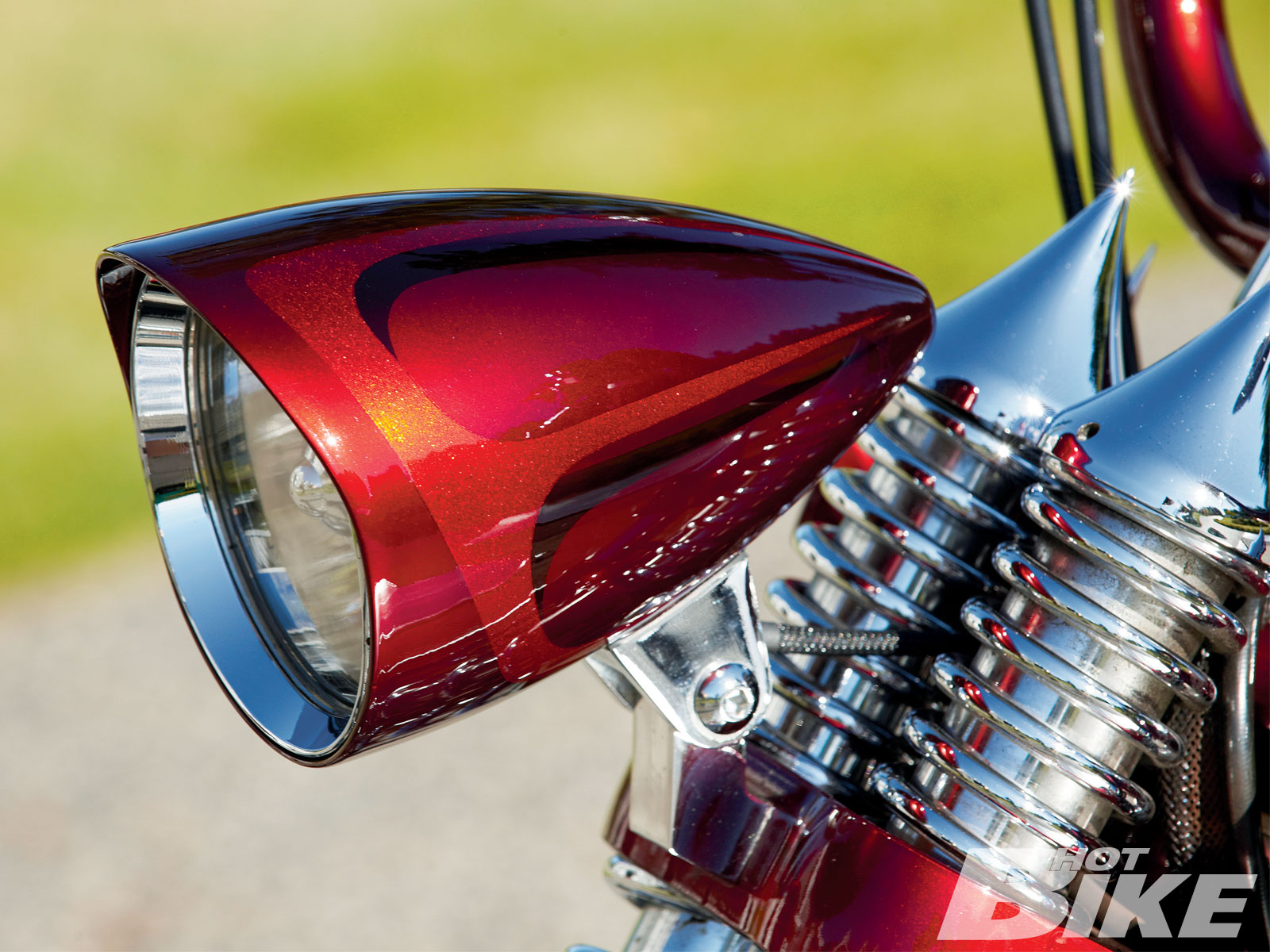 Our neighbors to the Pacific Northwest, the boys (or should I say boyz) over at Azzkikr Customs in Surrey, British Columbia, have been building ground-up custom bikes since 2001. Even though they might be way off the beaten path of the major show circuits, the crew has made it a point to travel far and wide each year to show off their latest creations rolling all the way down to Daytona for Bike Week and hitting the brakes in South Dakota for Sturgis.

Actually, it was while in Sturgis checking out the bikes at the World Championships of Custom Bike Building that we first came across the Azzkikr guys. They showed their building skills with a couple different entries in the competition. It was this bike here that caught our attention.

This bike was built for Judy Edmondson, and being that it was her first bike, she wanted it to be her dream ride. Judy was also interested in the look of a hardtail but wasn’t too hip on the feel of a hardtail. So after talking with the Azzkikr team they figured out a way to give Judy exactly what she wanted. They started with a Maximum Motorcycles rigid frame with 34 degrees of rake and 2 inches of stretch in the downtubes. The addition of an American Suspension springer frontend helped give the skeleton of the bike a chopper-like stance. To take care of the rigid ride and give Judy’s cushion a little more pushin’, a Paul Cox Rigid Air-Ride setup was mounted under the seat.

With the mantra “go big or go home,” running through their heads, the Azzkikr crew cut a custom set of billet three-spoke wheels with their logo engraved in each of the blades. While the rear was a modest 18×5.5 wrapped in a 200mm Metzeler, the front was a step up from the more traditional 21-inch chopper wheel. Actually it was more like two steps up, as the boys stuffed a 23 between the Springer legs. To give Judy some go with her show, a 100ci Ultima engine was mounted between the frame rails and an Ultima six-speed trans and 3-inch open beltdrive were used to finish off the driveline. To help suck in fresh air Azzkikr Customs crafted a custom velocity stack while a set of upswept Big Growl pipes were used to expel spent gasses.

The Azzkikr team added some skin to the skeleton by stretching a King Sporty tank for a sleeker look and to give Judy extra fuel for long hauls. Underneath the seat a barrel-style oil tank was engraved with the Azzkikr logo. To keep the mud off her back and provide a spot for a passenger Azzkikr Customs fabricated a tight-fitting, thumbnail-style fender supported by a hand-bent custom fender strut.

When it came to paint for Judy’s ride everyone wanted it to stand out from as far away as possible so the decision was made to go with a bright bronze and red paint scheme. However, as you can tell, the red wasn’t just left to the frame and sheetmetal, it was also applied to parts of the Springer, the headlight, handlebars, primary, and even the seat.

After five months of waiting, Judy’s bike was finally complete, and fittingly, she named the chopper “It’s About Time.” The Azzkikr team says while the bike looks like it never gets ridden, it’s on the road all the time and at all the shows. We’d say for a first-time chopper owner, Judy ought to be pretty pleased with the outcome; it’d be pretty tough to improve upon this. But then again there’s always the next one, right Judy?

Effective 2009, the city of Myrtle Beach, South Carolina, will no longer host motorcycle rallies. The city even posted a […]

When we rolled the new Low Rider ST off the showroom floor at Quaid Harley-Davison this summer, we were […]