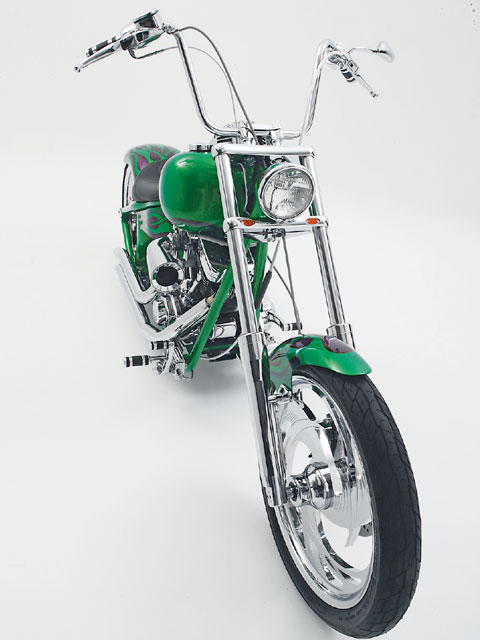 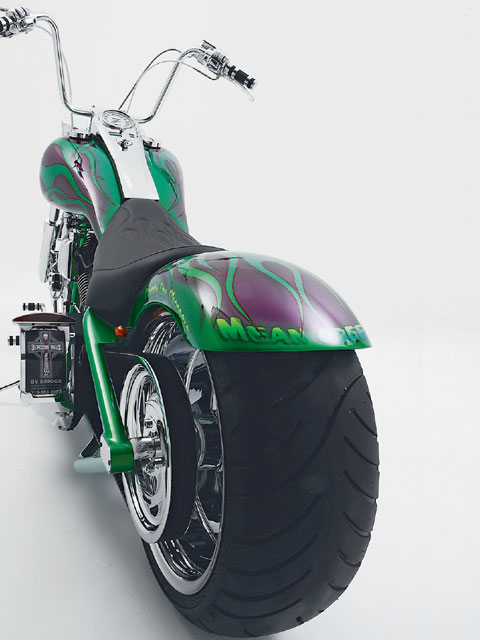 After 20 years serving as a Syracuse, NY, detective, Don Pikarsky decided he wanted a new scoot, something of a ground-pounder. He envisioned a custom rigid for its stance and weight savings, combined with a 45-degree big twin that made tons of low-end torque with the ponies to wind it out. The veteran cop looked up his old friend Pat Briggs, owner of County Line Choppers, to make his thoughts a rolling reality. Pat and Don originally met some 15 years ago when the two of them were attending a bike run in upper New York State. Pat saw Don as a cool, laid-back guy who was into bikes and having fun with his bros and only found out later that Don was actually in law enforcement. Looking back at those days, Pat jokes that at least nothing majorly illegal was going on.

Rolling into the Phoenix, NY, County Line shop, Don knew from the look of the place he had found the temporary home for his new build. “No problem,” Pat said, after Don explained what he wanted. Pat and his boys would take care of the basics that Don was after, and they’d get to do whatever else they wanted to the bike. Sticking with the hardtail requirement, Pat got to work cutting 1-3/8-inch steel tubing to create the triangular frame with 4 inches of downtube stretch and a 40-degree neck. A set of Pro-One triple-trees with integrated blinkers and fork tubes was bolted to the neck before mocking up the wheels to make sure everything looked right. The frame rake combined with the upward stretch allows for a longer set of fork tubes to give the frame the proper parallel stance with the ground.

For the motor, Pat went with a RevTech square (featuring a 4-inch stroke and bore), 100-inch EVO-style engine breathing through a Ram Air forward-facing velocity stack. The black and polished motor’s exhaust gasses are passed out of the combustion chamber by a pair of dual Samson pipes that turn down at the ends. A pair of ignition coils, fired by a Crane ignition module, were mounted to the left-side motor mount and concealed with chrome covers. To keep the vibes low on the hardtail while cruising down the road, a left-side-drive RevTech six-speed tranny was bolted up to the frame. The chrome tranny gets its power from the crank through an enclosed chain primary with a BDL clutch to reliably keep the secondary drive belt spinning.

The final drive belt is attached to the rear of the bike through an RC Components pulley bolted to an 18×8-1/2-inch matching wheel carrying an Avon 250 tire. Due to the lack of a rear suspension, Pat likes to run the rear tire pressure at a mere 20 psi, making the ride a little plusher. Axle mounts are hidden by side plates at the rear of the frame’s tail section. Braking duties are handled by a chrome Hawg Halters caliper clamping down on an RC Comp brake rotor. The same braking arrangement is found on the front of the bike but attached to a 21-inch RC wheel with a sleek Avon tire.

County Line tackled the sheetmetal next. Pat and Don wanted something clean and bold for the metal skin. The guys fabbed up the front fender, a short unit that keeps the road debris and water from hitting Don while riding. Out back, Pat made hidden fender struts to hold the short and rounded rear fender that complements the lines of the bike. A set of Fat Bob gas tanks was made up by Pat, who stretched them to produce a sleek look. Some extra detail was given to the oil tank, also fabricated by County Line. The rear sides of the oil tank were extended and plasma cut in a flame design that would eventually match the flamed paint scheme. All of the sheetmetal was treated to a bath of LimeTime Green paint, laid down by JT’s Customs, with purple accents and flames done by Jason Baron. Even the Custom Chrome headlight was treated to some paint, allowing the light to blend in with the front of the motorcycle.

Atop the gas tank sits an FL-style Custom Chrome dash with cutouts up front and carrying a CCI speedo that fits with the style of the bike. Looking up, you’ll find a set of Flanders ape-hanger handlebars on shorty risers that hold chrome CCI hand controls and contoured V-Twin mirrors. Legends was called upon for a place for Don to shift, brake, and put his feet. The finishing touches were a streamlined license mount from V-Twin that mounts to the derby cover. The unit also has an integrated brake light and license-plate light. Small rear blinkers, also from V-Twin, are situated at the forward side of the rear fender just above the frame. For the finale, Pat designed a seat that would be extra-special for Don. The flame-stitched seat has Don’s very own Syracuse PD badge number sewn into it and shaped like a police badge.

After four months, Pat was confident that the bike he built for Don was pretty special. He couldn’t wait to call Don to come by and check out all the work that went into the build. When Don showed up, he was blown away by how well the guys at County Line Choppers had followed his thoughts and dreams on the custom bike project. Since the build, Pat and Don have become good friends with something in common-something that reminds Don of Pat every time he fires up the mean green machine. They’re hoping that in another 15 years Pat will be able to build Don another custom ride.

Covington’s Machine Head line is a mix between black and machined, with diamond-cut highlights, which really help the parts get […]