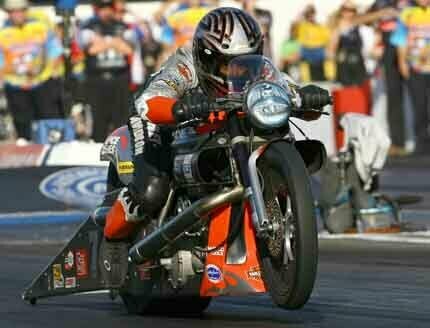 Krawiec qualified fourth for the event with a run of 7.011 seconds, just ahead of Screamin’ Eagle/Vance & Hines rider Andrew Hines at 7.012. Hector Arana was the quickest qualifier with a run of 6.965 seconds.

Hines opened Sunday eliminations with a win over Stone Mountain/Granite Mountain Harley-Davidson rider Junior Pippin. Krawiec defeated Suzuki rider Wesley Wells in the first round, and for the second week in a row faced Hines before the final round as the teammates lined up in round two. Krawiec prevailed with a 6.994-second run to best the 7.051 of Hines. Krawiec then used a 6.954 run to beat Rum Bum Buell rider Bailey Whitaker (7.193) to advance and face Treble on the Team Scream Suzuki in the final round. Treble won with an outstanding 0.007 reaction time and a 6.955 elapsed time, as Krawiec left the line in 0.061 seconds and could not make up the difference despite his quicker 6.906 ET, his best of the day.

“You had better bring a great reaction time when you line up against Craig Treble,” said Krawiec, who is the defending NHRA Pro Stock Motorcycle champion. “Mine was not terrible but not enough to get it done, so it’s disappointing to lose after putting up a great ET. I’m happy we were able to gather more data about both of the Screamin’ Eagle V-Rod bikes and how the additional twenty pounds is affecting our race bikes this weekend.”

“These are the same engines we ran last weekend in Chicago, and I think we are getting closer on a new tune-up to accommodate the 20-pound heavier minimum weight for our bikes,” said Hines. “We are really strong in the first 60 feet, so we are getting some ET back there. Now we’ve got two weeks off, so we’ll get back to the shop and tear everything down and see if there are any surprises inside.”

After six events on the 17-race 2009 NHRA Full Throttle Pro Stock Motorcycle schedule, Krawiec leads the series with 528 points. NitroFish Buell rider Matt Smith moves up to second place with 452 points, while Hines drops to third with 436 points. Treble is fourth with 427 points.

The next event on the 2009 NHRA Pro Stock Motorcycle schedule is the Summit Racing Equipment Nationals, June 25-28 at Summit Motorsports Park in Norwalk, Ohio.

The 11th Annual Chopperfest was a celebration of creativity and art in the form of custom motorcycle building. The Chopperfest […]

Living The Life | New-Old King Of The Hill

Situated in the Black Hills of South Dakota lies a town rich in history, rich in beauty, rich in entertainment, […]

Year One Custom BikeYear One, the largest supplier of muscle car and restoration parts in the country, has been building […]