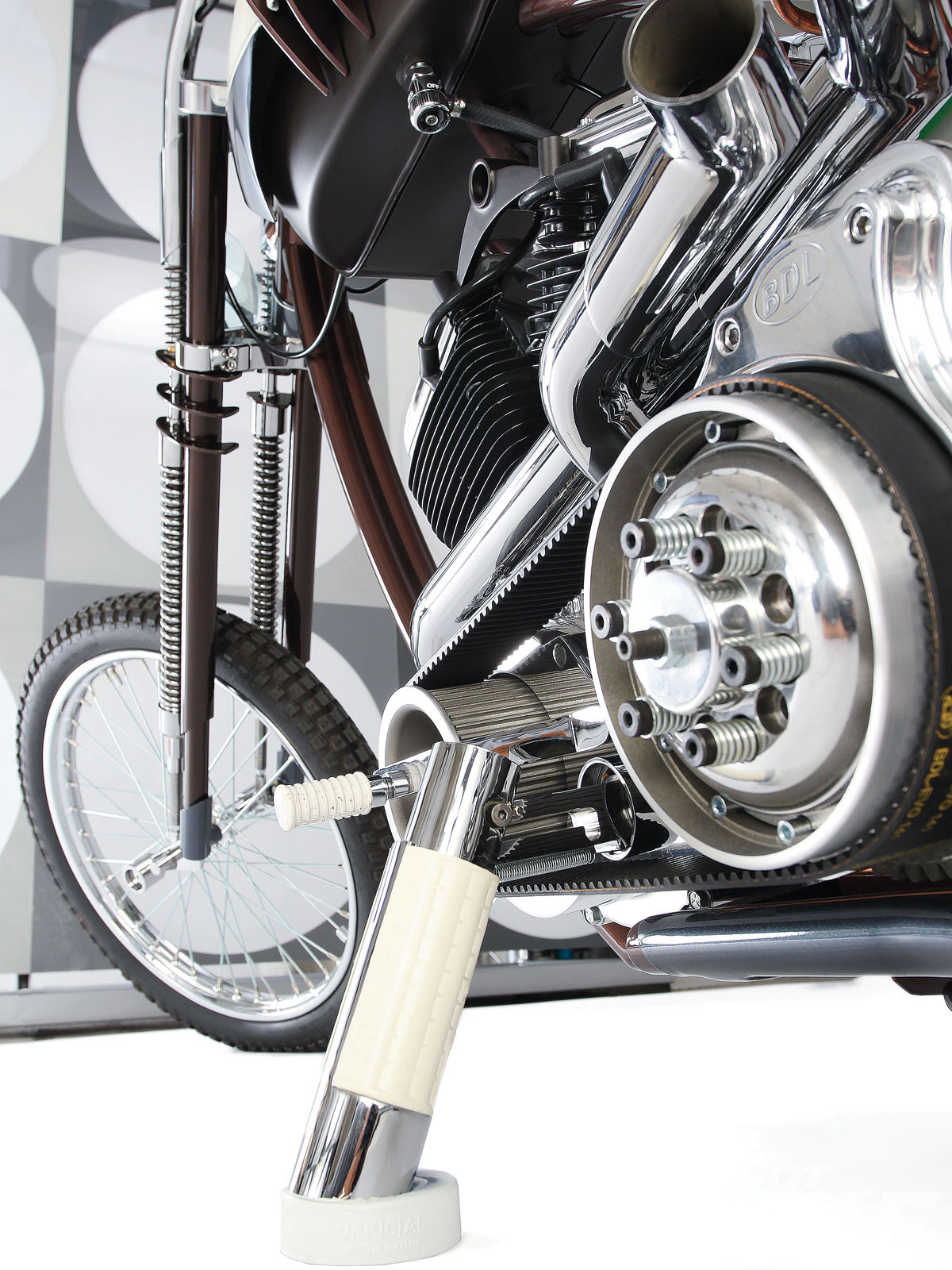 Would you believe this kickstand is also the left-side footpeg? It locks in place when Mike’s ready to ride, and unlocks and folds down when he arrives at his destination. 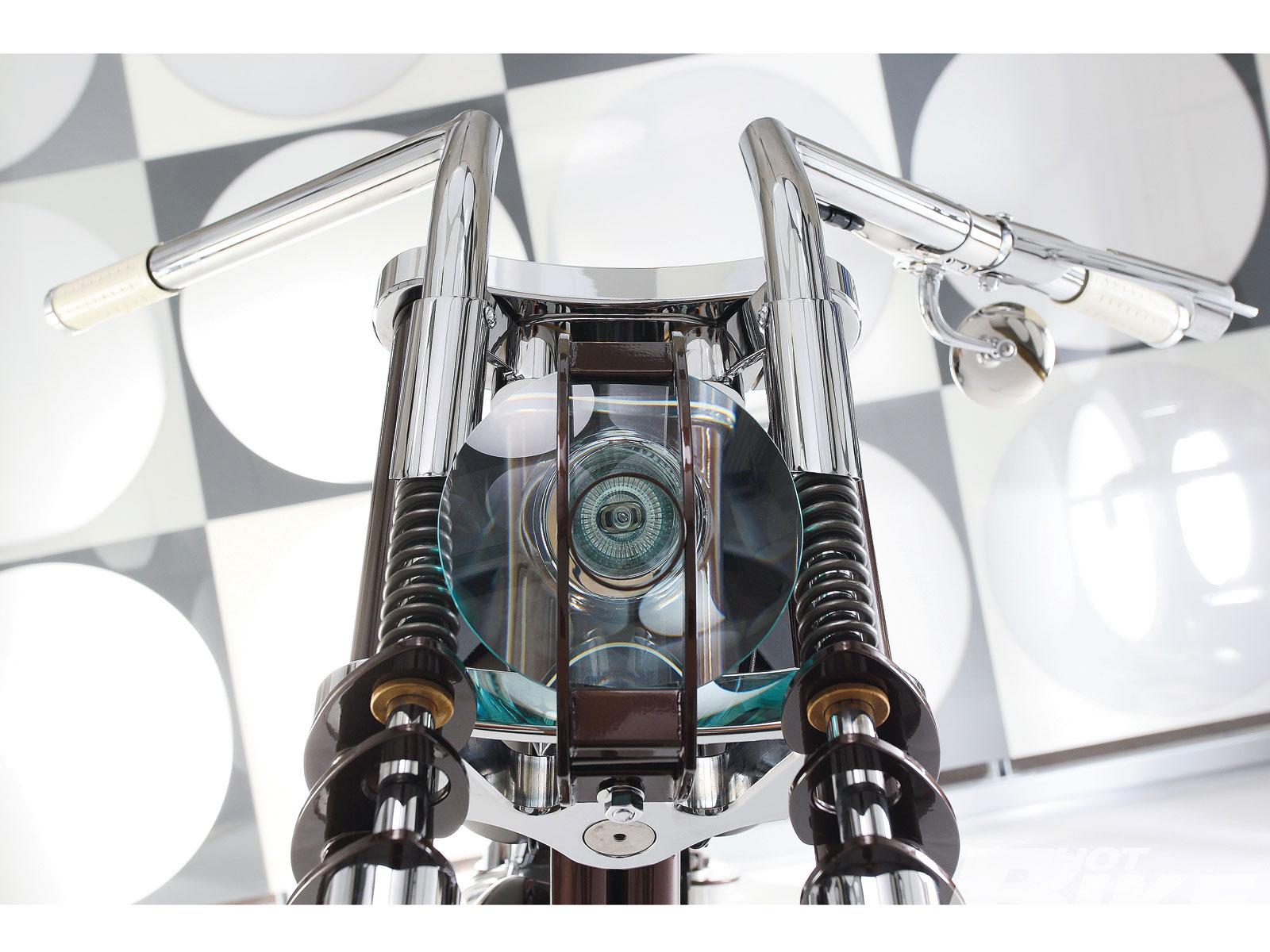 The headlight is similar to an old lighthouse light, where a Frensel lens is used to magnify the solo light built into the frame’s neck. Mike says it’s extremely bright. 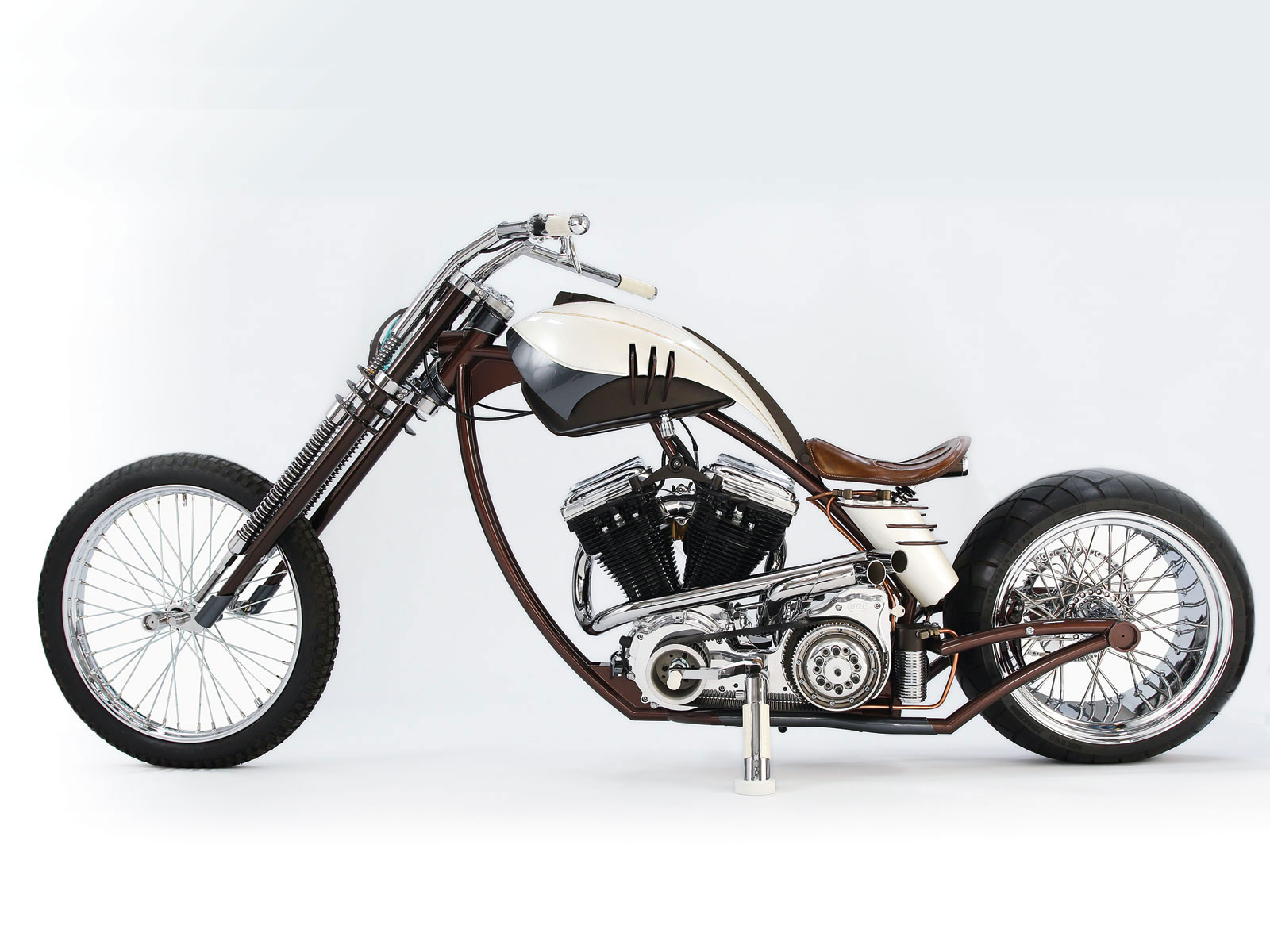 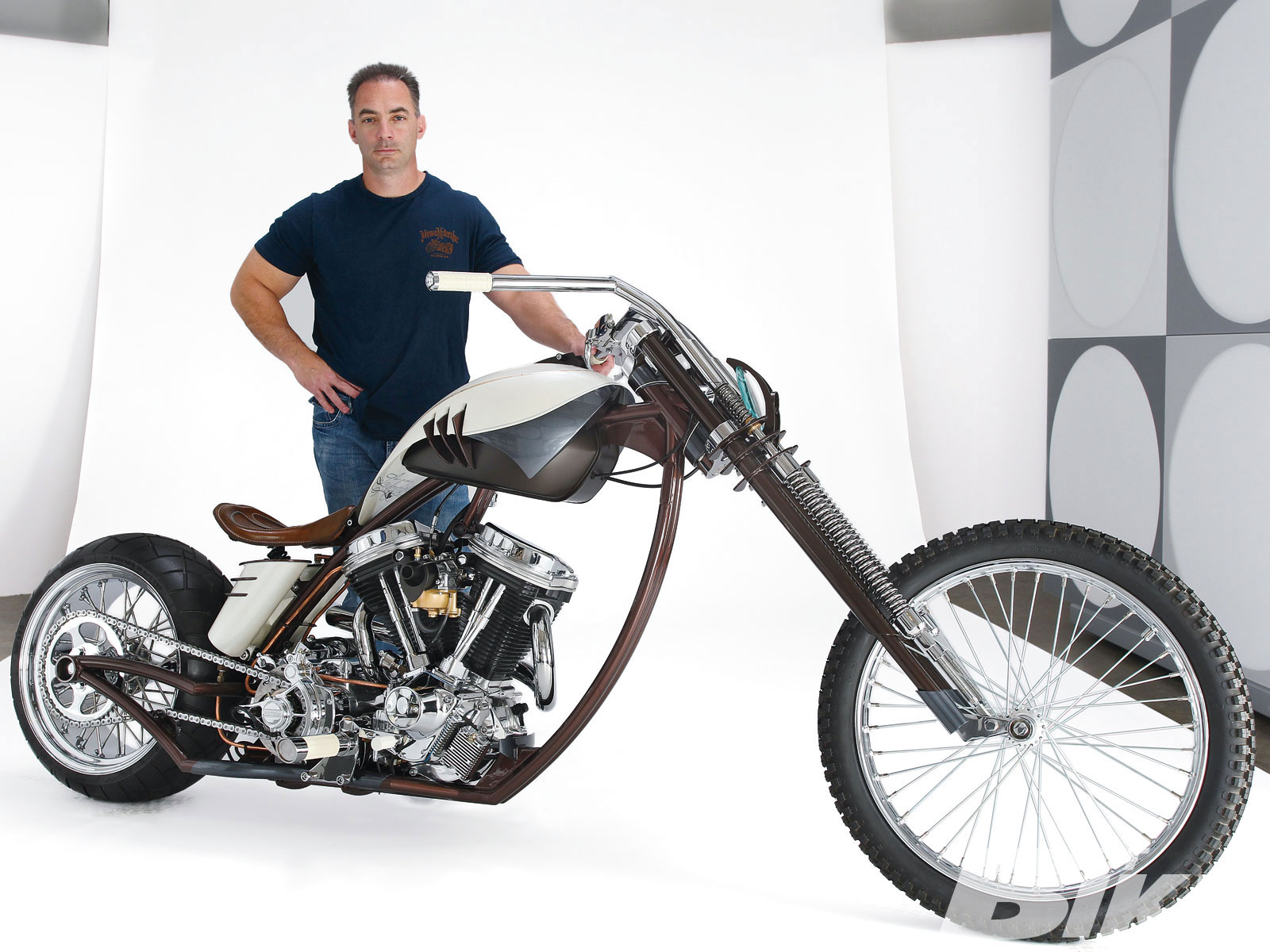 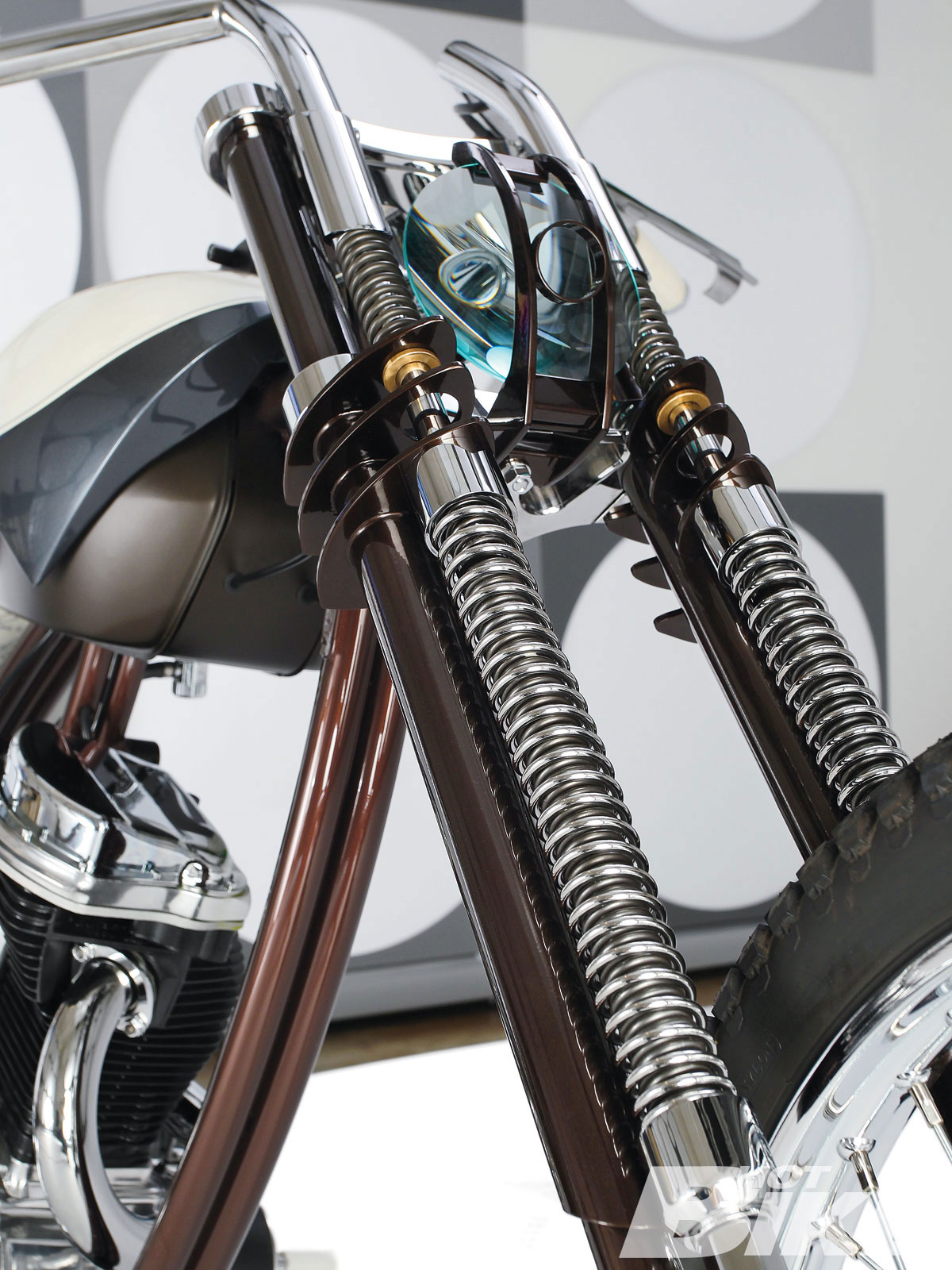 Mike started with a Harley JD Springer but thanks the handy skills of his friend Vince Spadaro it became double external Springer frontend. 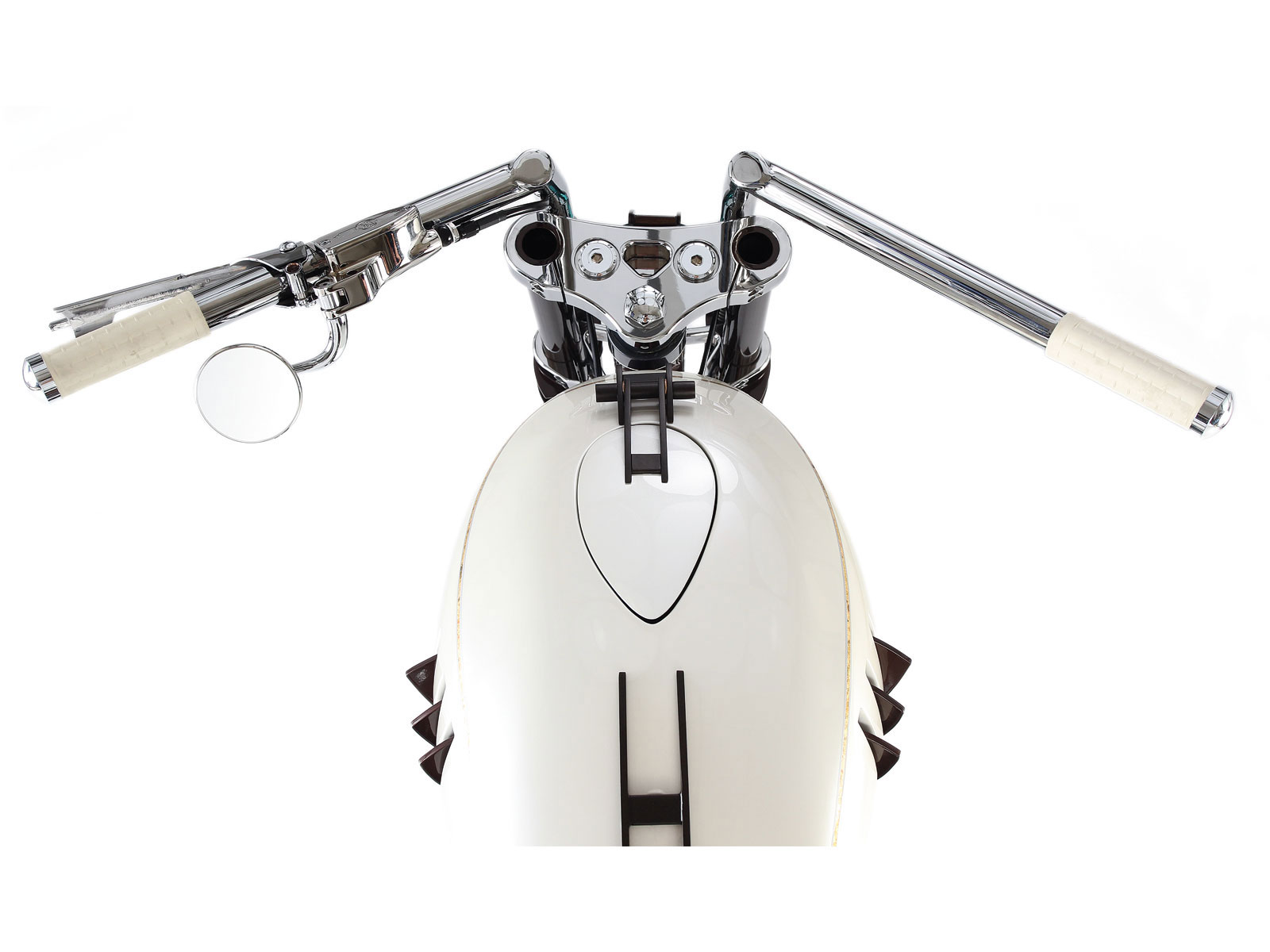 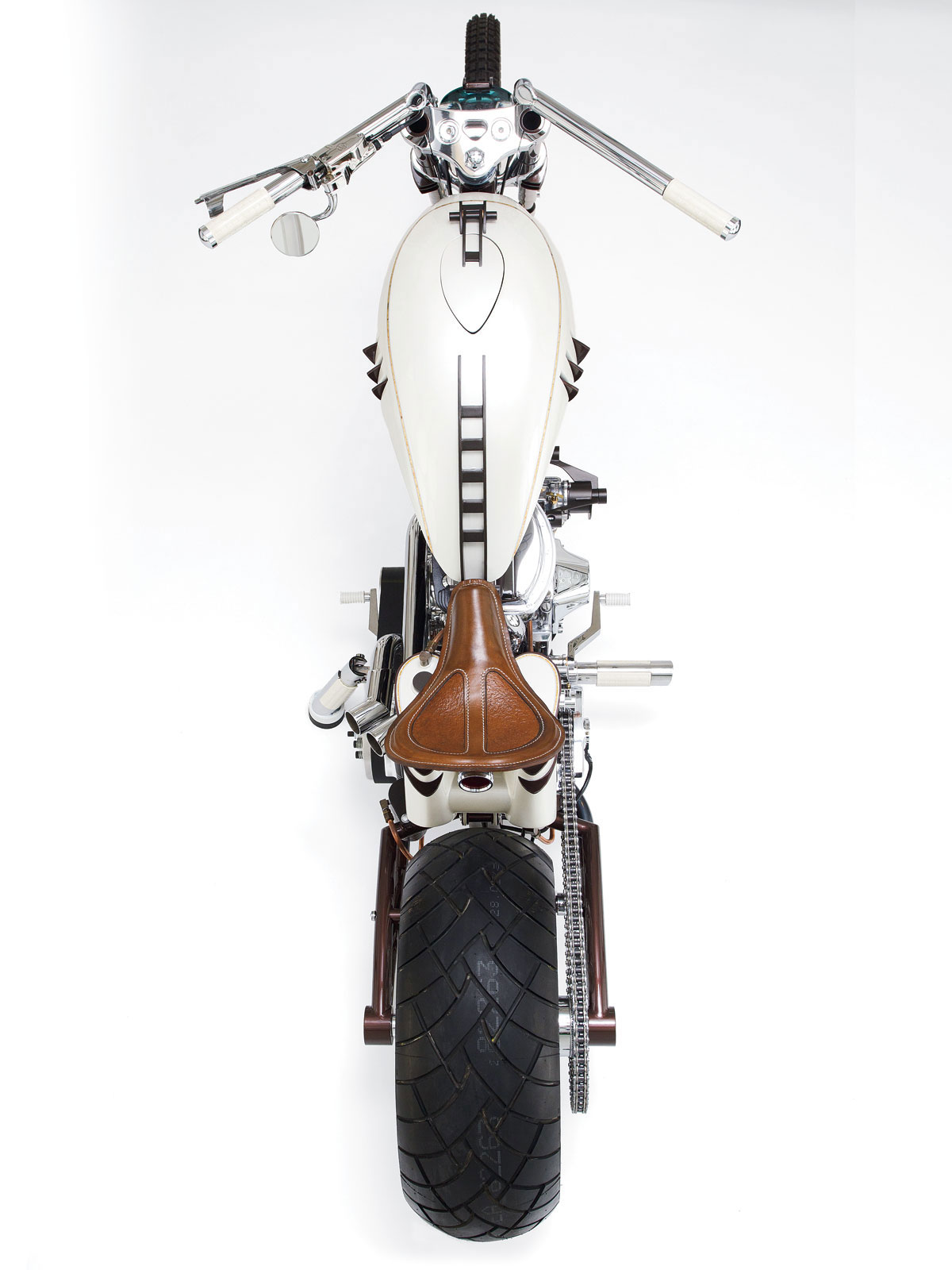 Editor’s note: Every so often we encounter a bike you’d never know started life as a stock Harley-Davidson. Such was the case with Mike Ludovico’s ’99 Softail. Building bikes out of his cramped garage in San Mateo, California, it’s clear that his passion and know-how helped him create something so intricate and unique. Being that Mike pretty much built the entire bike, we’ll let the story come straight from him.

The inspiration for this bike started with an Aermacchi Italian/Harley dirt bike gas tank. I knew I wanted to incorporate it into a build somehow, so I took a ’99 Harley Softail Custom that I was not riding and I tore it down to the frame and motor and sold the rest. Once I placed the tank on the backbone, the ideas began to flow.

I mounted the frame to my frame jig and cut it into pieces. After about nine months contorting the stock frame, it was finally done. The smooth double-arching backbone tubes and down tubes were bent on a 70-year-old tri-roller tube bender. It was a lot of work to get it right, but the end result was definitely worth it. For the frontend, I started with a Harley JD Springer that my friend Vince Spadaro was building for the Cannonball Run cross-country race, until it eventually became a double external Springer frontend.

The engine needed some tweaking as well, and I had the opportunity to spend time in Vince’s shop, along with my friend Raymond Scott, rebuilding the original ’99 Harley Evo motor. I split the cases, polished them, installed a new cam, carb, pistons, rings, and topped it off with Panhead rocker box tops.

“During the Custom Chrome International Bike Show I had the chance to talk to Tom Zimberoff, and he gave me the biggest compliment. He asked if this bike could be used in his next museum exhibit, Art of the Chopper.”

The headlight is a projector magnifying glass lens with a high-intensity spotlight behind it. I stretched the neck of the frame to integrate the light into the neck. It’s incredibly bright…similar to high-end cars or Frensel lenses found in lighthouses. The undermount bars, which I bent to fit the bike, are hiding the throttle cables and hydraulic lines for the clutch. The clutch master cylinder is a brake master cylinder that I turned backwards and built into the bars. I then made a clutch lever with a pivot through the bars.

Back to the tank, I constructed a shell to cover the 1974 Aermacchi gas tank that holds about 2-1/2 gallons of gas. I like the lines of the shell, and I felt it added more of an overall visual effect. The seat with the integrated taillight rides on a shock for some comfort. Keith from Black Sheep Leather covered the seat in hand-hammered leather. His work is the best I’ve ever seen. Below the seat is a double tower oil tank with cooling fins. When re-purposing the Harley frame I not only hardtailed it, but I incorporated the slip fit lugging at the joints similar to old handmade bicycles. I moved the transmission plate and hid all the electrical under it. This allowed me to run a right-side transmission with a Tranz brake. The open primary started as a standard 3-inch BDL, but I cut down the backing plate to let the pipes exit on the left. I mounted the shift lever and peg, which also serves as a kickstand. The left peg slides out and folds down to become the kickstand. When done, it lifts up, slides back into place, and locks in the original position. I machined down the clutch basket to keep it narrow and cut the 3-inch belt down to 2-1/4 inches. The bike’s riding stance with the mid controls and bars is identical to my Dyna; easy to ride and not stretched out. The copper lines were bent by Raymond Scott to follow the line of the frame perfectly after several attempts. For the wheels, I wanted the front rim to be as interesting as the rear so I used a standard Metzeler 240mm rear tire and designed and cut a more aggressive tread to fit the front tire’s tread pattern. Cutting that tread was somewhat of a new experience but I’m pleased with the overall result.

During the Custom Chrome International Bike Show I had the chance to talk to Tom Zimberoff, and he gave me the biggest compliment. He asked if this bike could be used in his next museum exhibit, Art of the Chopper. I was honored. I build a bike a year out of a small, cramped garage, no CNC machine, nothing fancy. I do not have sponsorships or get discounts. I pay full retail. I search swap meets for parts that I can modify or use, but I usually end up fabricating all my own parts. I want to thank my wife and kids for all their support!

RSD Introduces the Slant Slip On Mufflers High Performance Slip Ons for your bagger are here. RSD is proud to […]

The city of Los Angeles is the epicenter of the Southern California car and motorcycle culture. Serving as the base […]

The Dyna scene has exploded over recent years and literally spread across the globe. As it travels across the map, […]