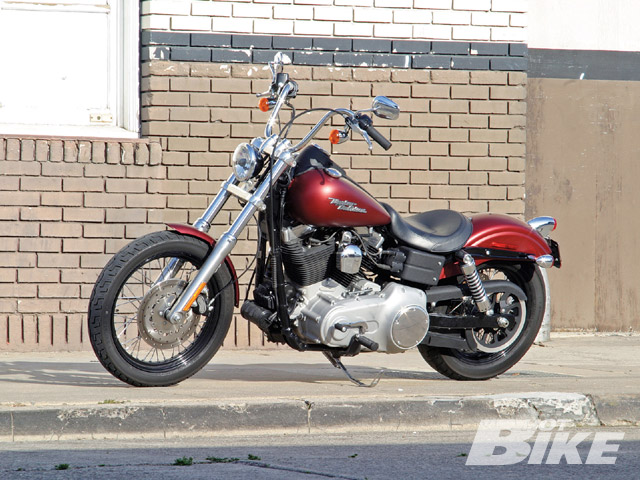 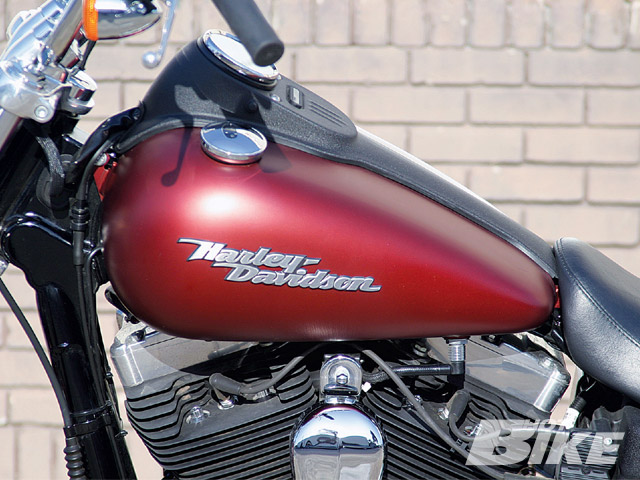 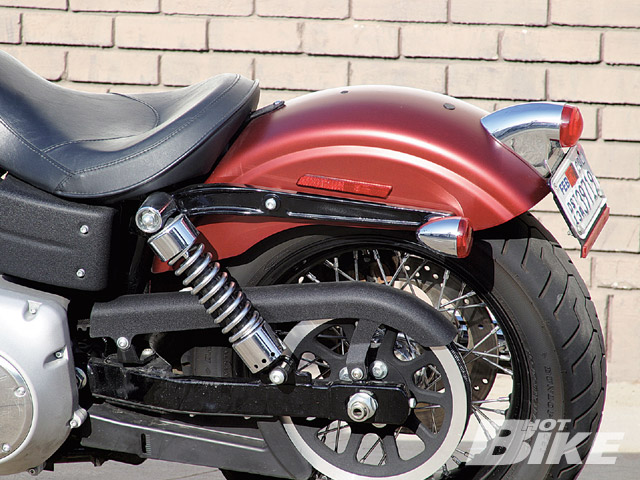 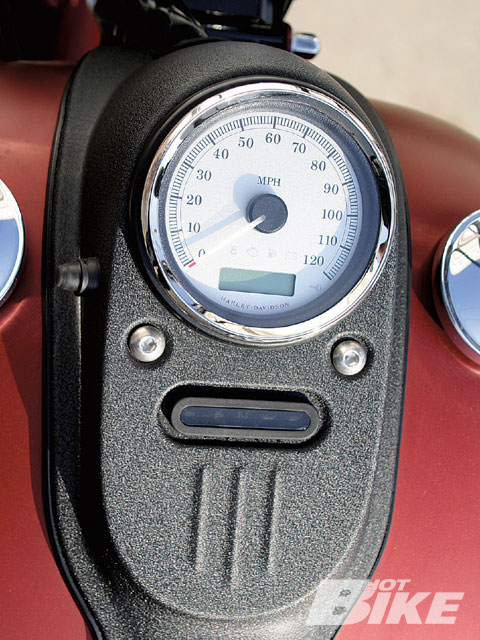 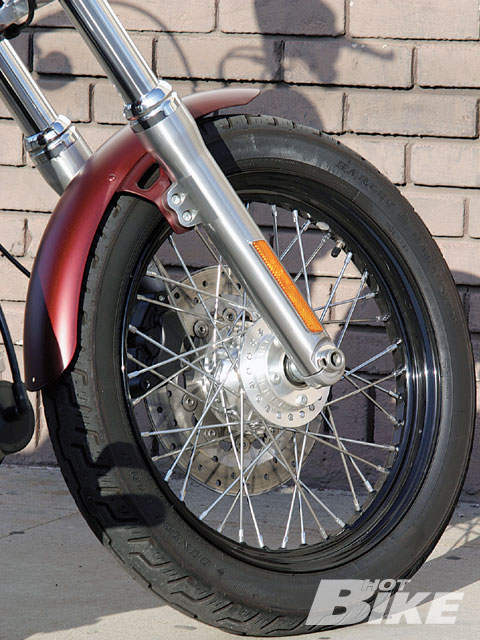 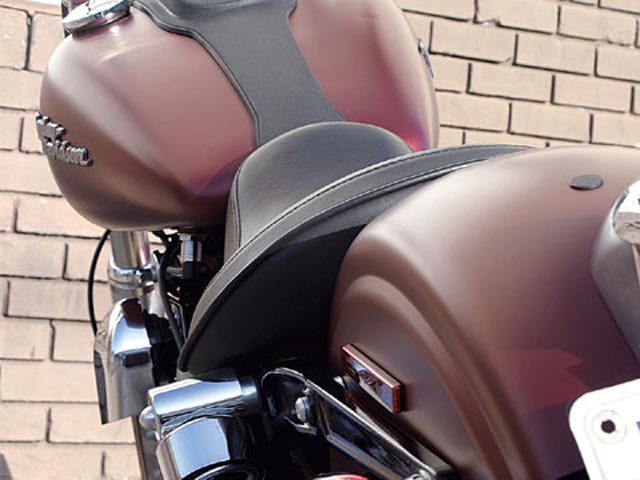 In 2006 the Harley-Davidson Motor Company introduced a new motorcycle to its lineup, the Dyna Street Bob (FXDB). It was obvious that the bare bones motorcycle was targeted for the next-step-up Sportster enthusiast who wanted a big twin, but may not have the funds for a Softail or Road King model. But, it was also targeted to those who wanted something other than a flashy cruiser loaded with chrome and a dynamic paint scheme. As part of Harley’s Dark Custom lineup the Street Bob is definitely not flashy. And sometimes (most of the time in my case), less is more. Well, the Street Bob has done quite well since being launched, and luckily for us, the MoCo has kept it around. We have the Bob for a while and we’re going to give it the HOT BIKE treatment. Stay tuned to figure out just what that means.

The ’09 Street Bob features a vibration isolated 96ci Twin Cam engine with a 3.75-inch bore and 4.38-inch stroke with a 9.2:1 compression ratio. Off the line, the rear wheel spins with ease, and making the bike accelerate through the gears are the six-speed Cruise Drive transmission, chain-driven primary drive, nine-plate wet clutch, and 32/66 teeth final drive belt. The power off the line is noticeable, but doesn’t necessarily throw you back in your seat; however, it still gives you the confidence to pass those big rigs on the two-laners with no problems. The new Straight Cut Chrome Staggered Shorty Dual exhaust pipes are a nice touch and I like the two-into-two design and the aesthetic of the mufflers. Simple. Harley finished the powerplant’s fins on the cylinders and heads in black, and stuffed them between polished rocker box covers and silver powdercoated cases-as opposed to the more blacked-out drivetrain from 2006-for a contrasting appearance. The trans and primary have also been powdercoated silver, which definitely makes the primary and trans stand out, but the cylinders and heads seem somewhat hidden by the trans, primary, and engine cases. To round out the contrasting look Harley could have coated the primary cover black. I think it’s a little too much with the primary, trans and engine cases all silver. The heads and cylinders seem to disappear. I really liked the color of the ’06 drivetrain better.

All the Dynas come with a new silver-faced speedometer that features a fuel range readout, which alerts you to when it’s time to refuel via the new fuel sender. This is a very nice feature since I always forget to reset the tripmeter

As for the rear section of the bike, Harley bobbed the fender even more than years past and sitting atop is a Sparto-style LED taillight, which works well with the new stop/tail/turn incandescent rear turn signals to create a circular trio of light. The front fender has been snugged up to the front wheel/tire combo to give it a lower profile. Overall, the Street Bob is a comfortable motorcycle. I will say though that the stock solo saddle is pretty flat and doesn’t hold my fat bum in place too well on quick launches. Maybe Harley could add a bit more curvature in the rear section of the seat pan. I notice that I have to put more pressure on the mid controls to help keep me in position, which causes my hip-flexors to cramp a bit. It’s not unbearable but it can be uncomfortable nonetheless, but still easy to fix. However, after a while at cruising speeds, I feel fine. The mini-ape hangers keep my posture straight without feeling awkward. Plus, my arms haven’t gotten tired after logging some pretty long trips on the Bob. I rock a set of apes on my personal bike, so it’s just a matter of preference. The Bob is great for long trips and around town cruising. They just need to swap out the seat.

The 29-degree front fork setup features polished billet aluminum 49mm fork tubes that fit nicely between the polished billet triple clamps. The recoil on the dual-rate fork springs work well in conjunction with the coil-over shocks in the rear, the bike glides down the road, and handles well in the twistys, too. The frontend is a little bland though. It could use a little contrast somewhere between the handlebars, triple trees, and lower fork legs; maybe black powdercoated triple trees with polished risers and a black bar setup, something a little more dramatic. The 160mm tire in the rear allowed me to bring the bike down in the turns with no problem, and I did so without scraping pipes, foot controls, or the primary cover, which I like because I try to lean every bike over as low as they’ll go; kind of like the Limbo. The Street Bob dips pretty far down with a 30-degree lean angle.

Since the Bob is set up for a solo rider, it would make a great first project should you ever want to take the wife/girlfriend out riding to bolt on a two-up seat and some passenger pegs from the good old P&A; catalog.

Overall the Street Bob is a great motorcycle. It has a 96-inch Twin Cam, it handles well in the twisty mountain roads and the freeways, and it oozes attitude and style. It’s the whole package. It also looks identical to my Sporty. Maybe that’s why I like this bike so much.

Here are the stock controls for our 2012 Ultra Classic. Stock bars are meant to fit a large portion of […]

01. As you can see, this tank suffers from a very common ailment. Dents, grinds, and file marks left behind […]

Kick off the Fourth of July right this year NoRCal style with custom cars and bikes. Don’t miss it!