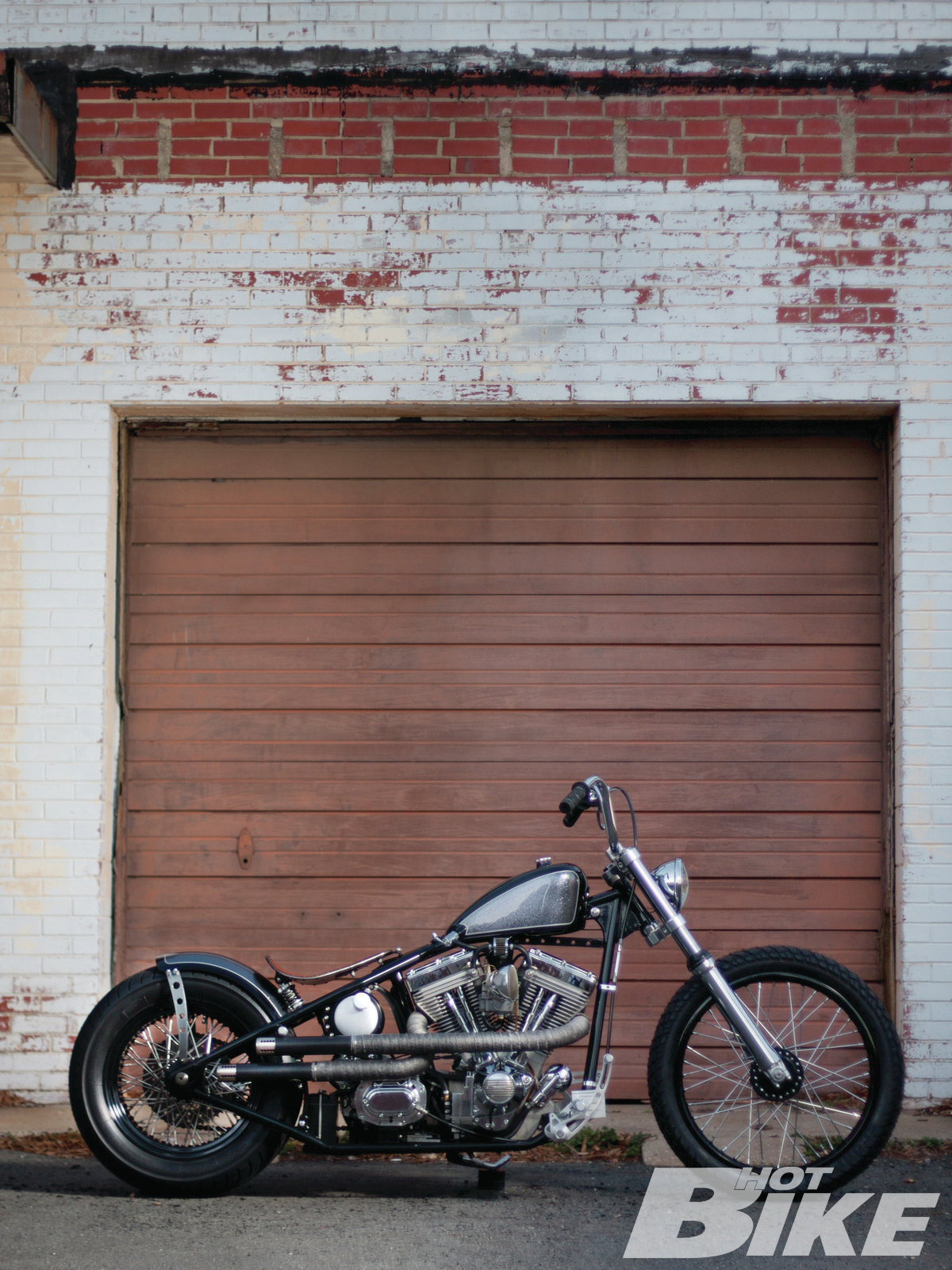 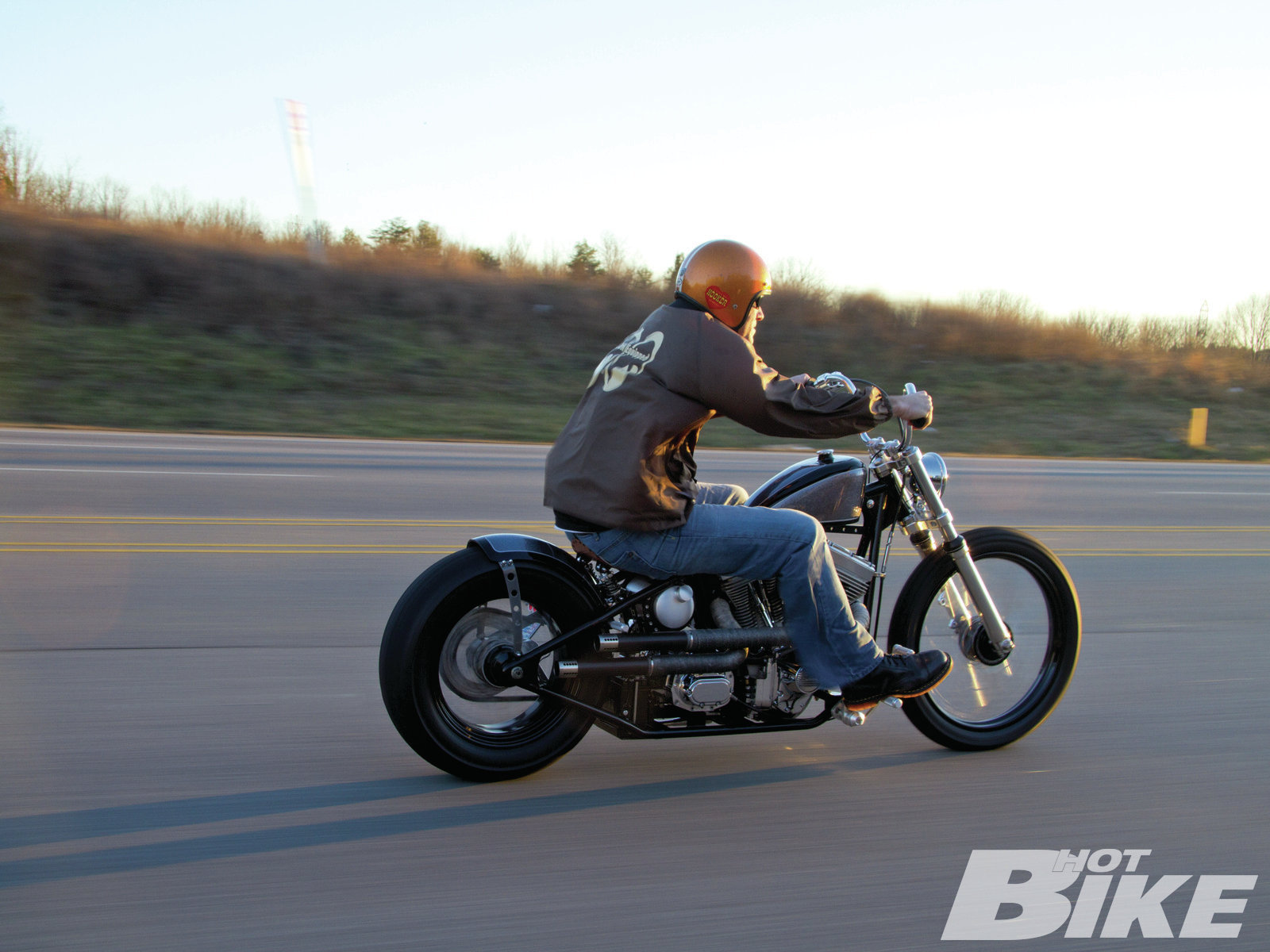 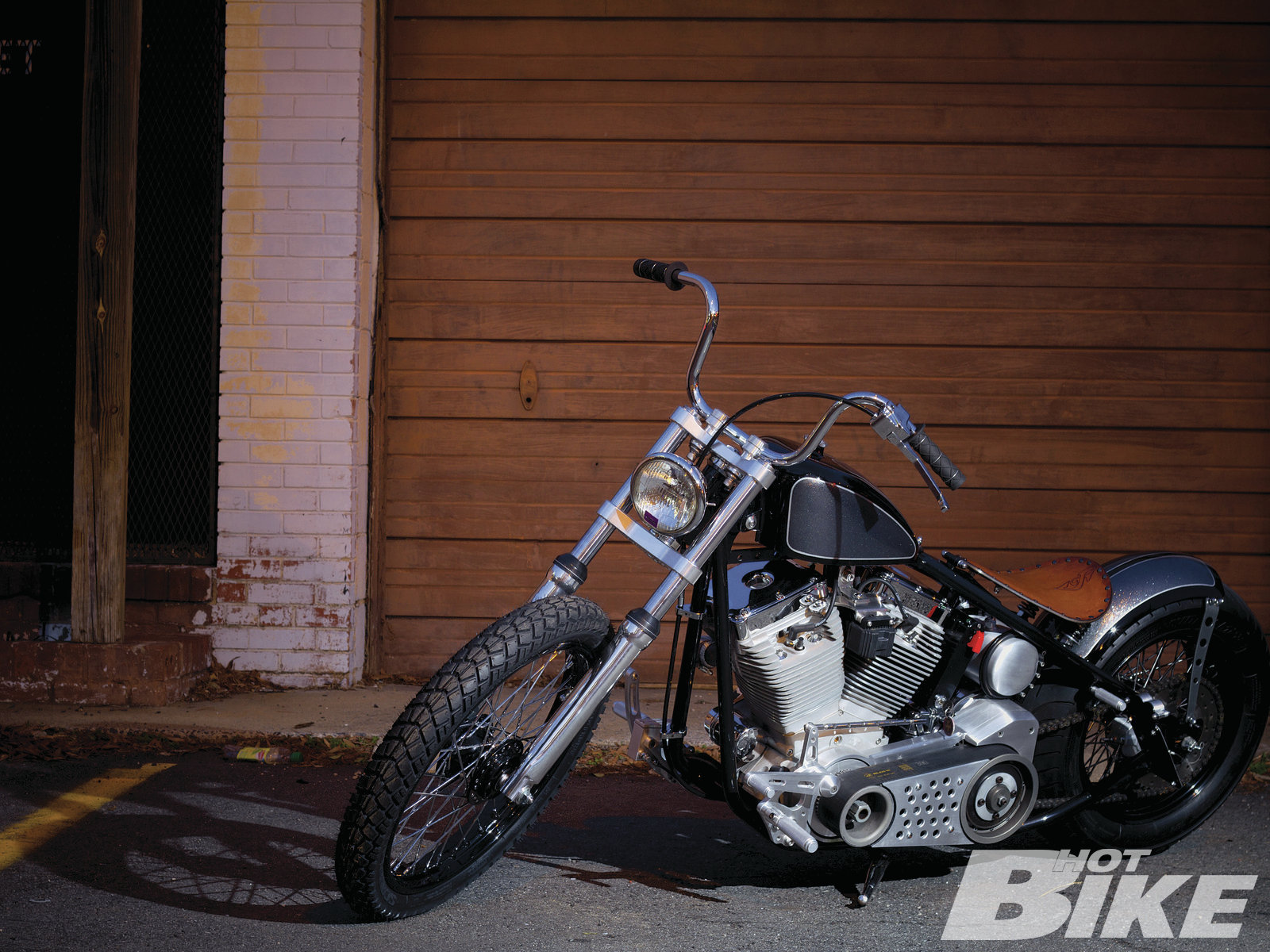 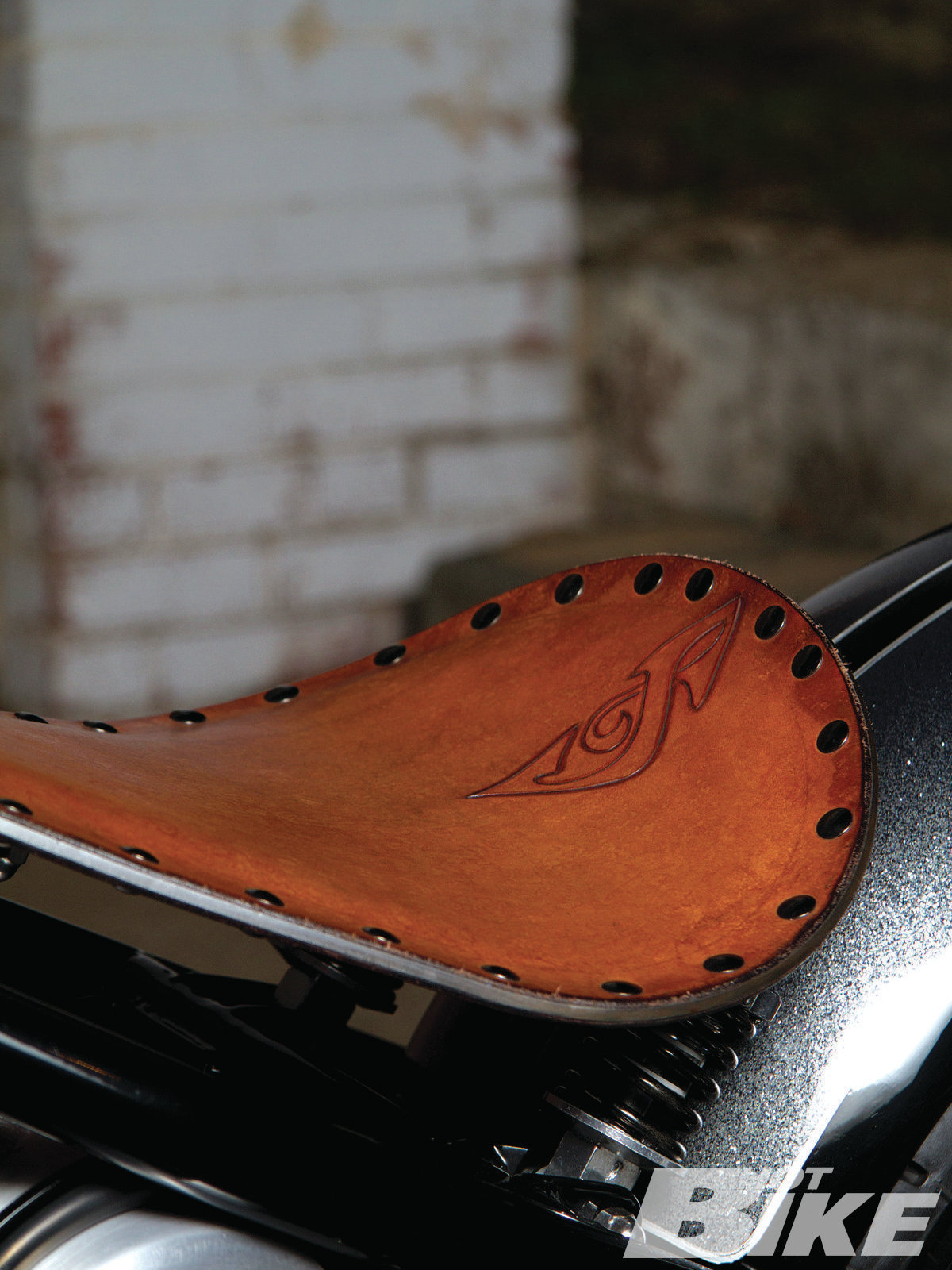 The seat pan and shocks are from Chopper Shox and the leather is from Eric’s last bike that Christian from Xian Leather removed and added to the new pan. The design matches the tattoo Eric got after his daughter’s birth. 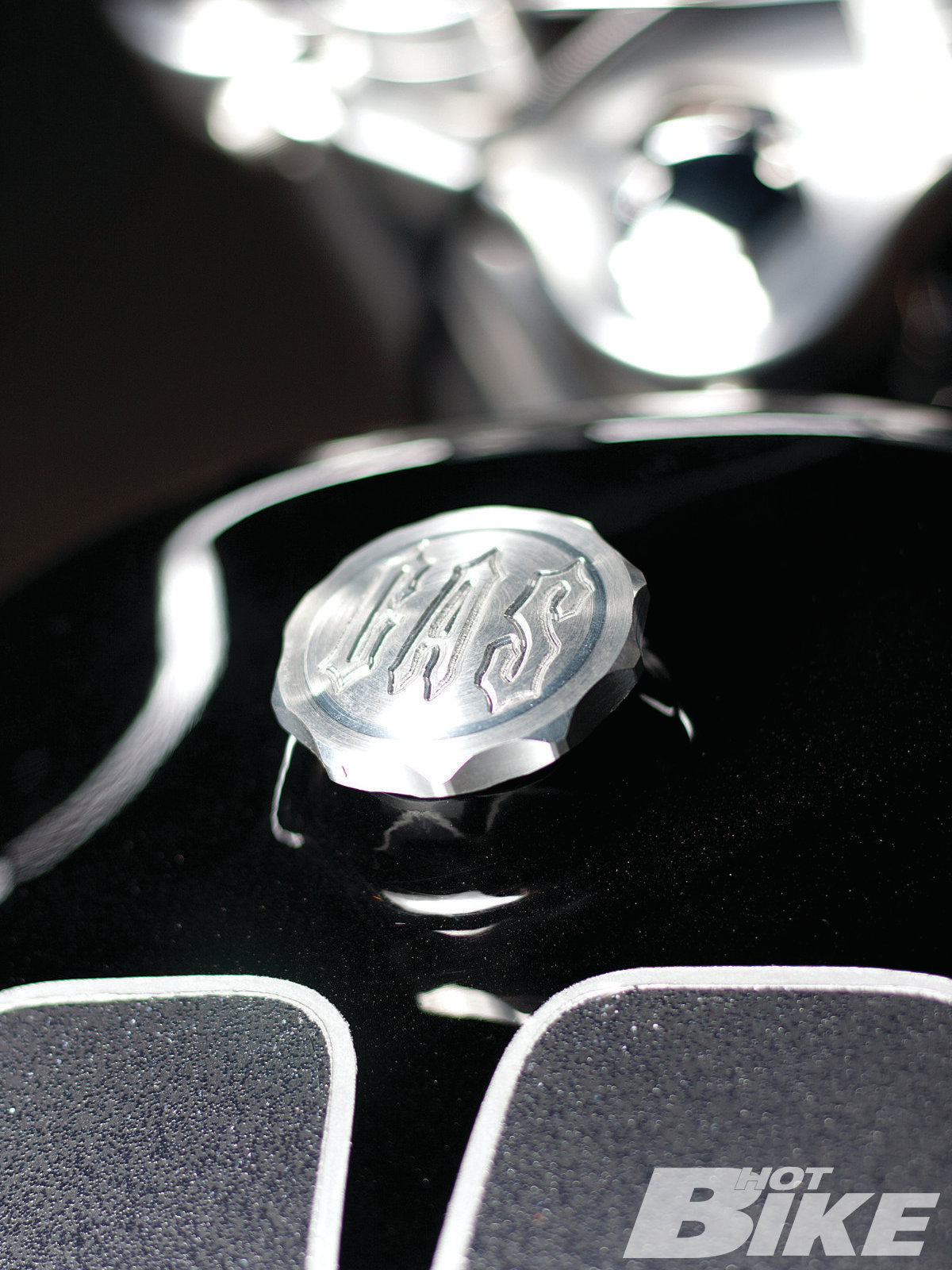 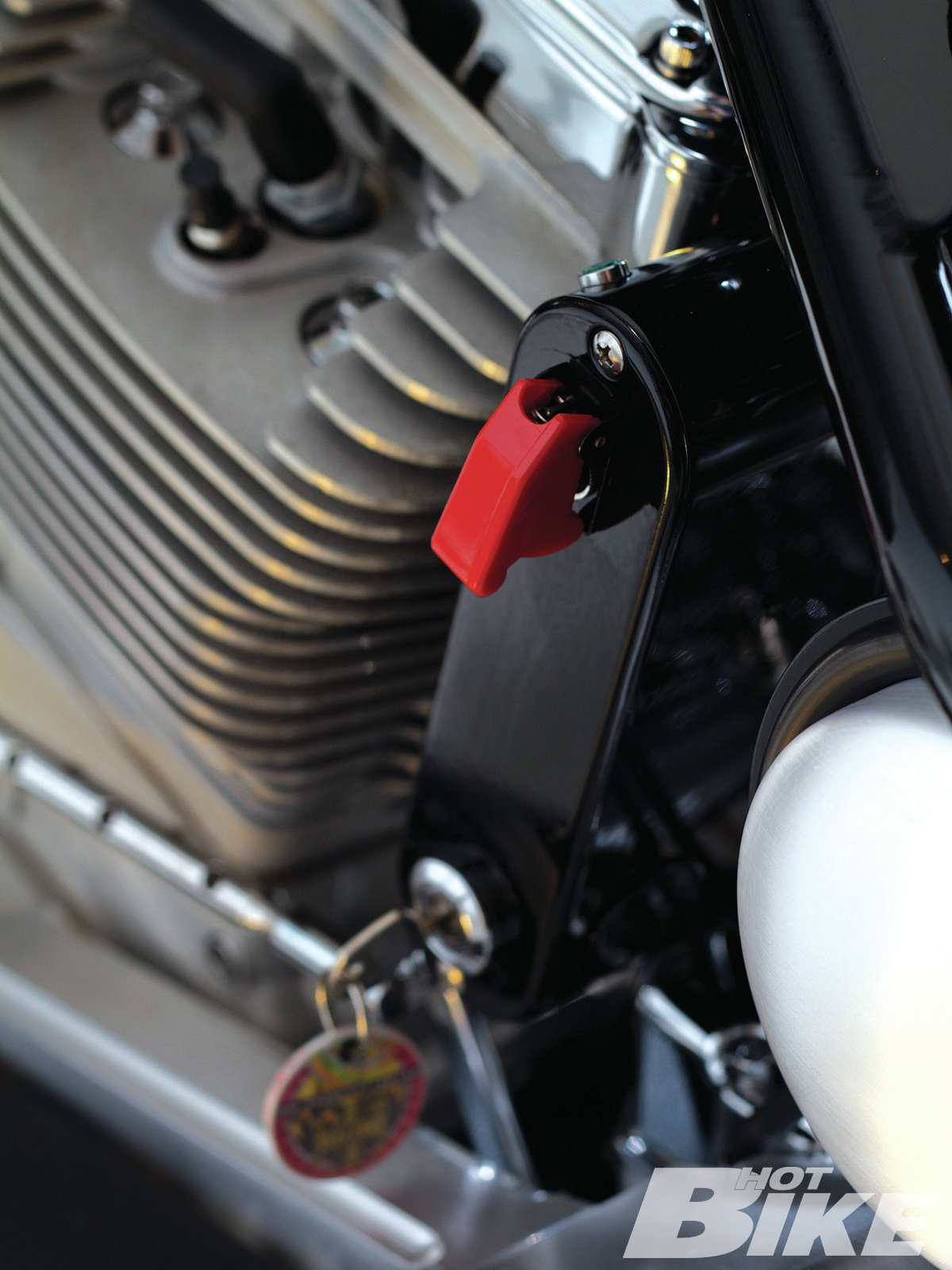 The aircraft-style kill switch and key switch are tucked into left side below the seat and in front of the Mooneyes oil tank to keep the bike streamlined. 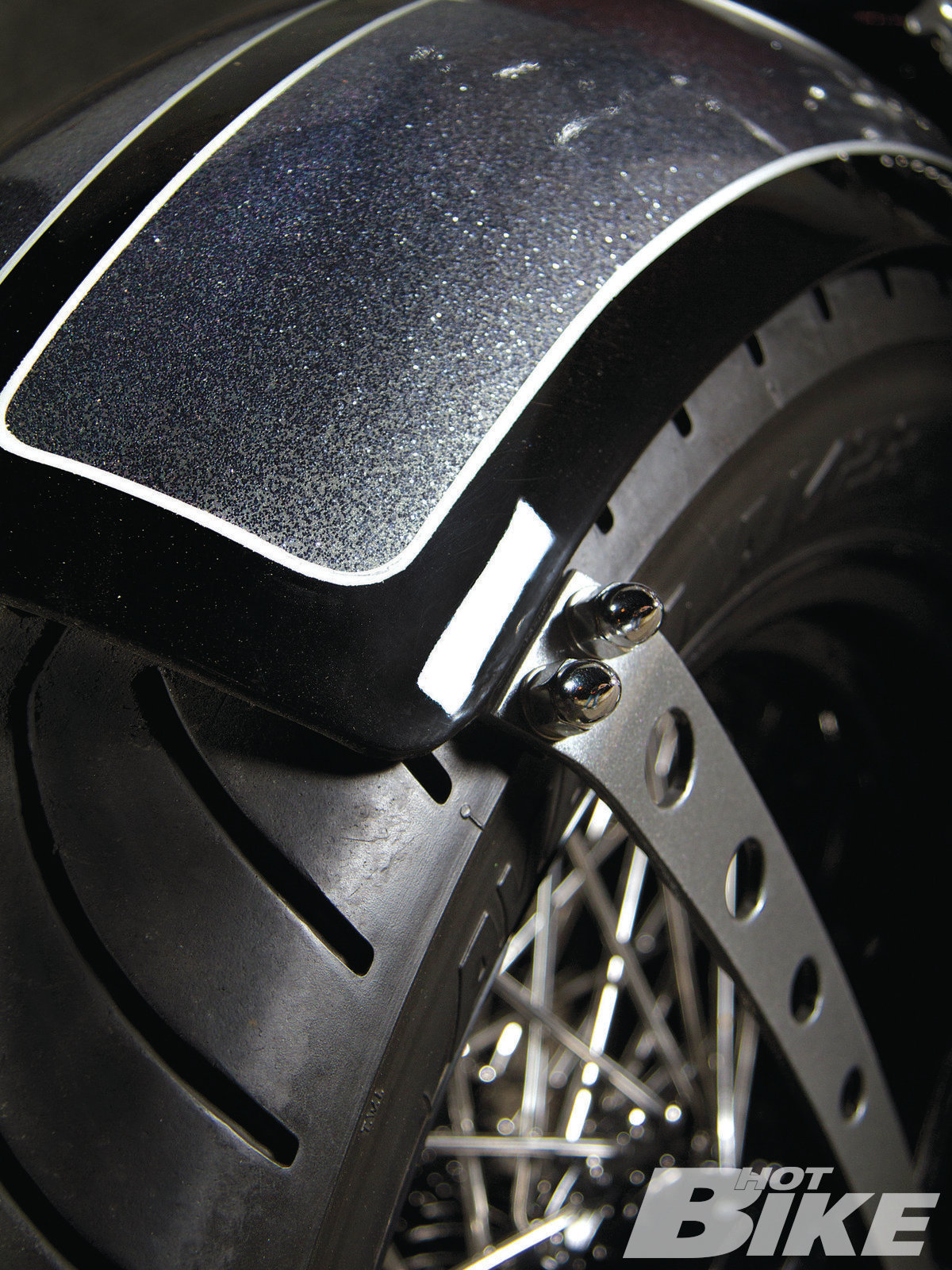 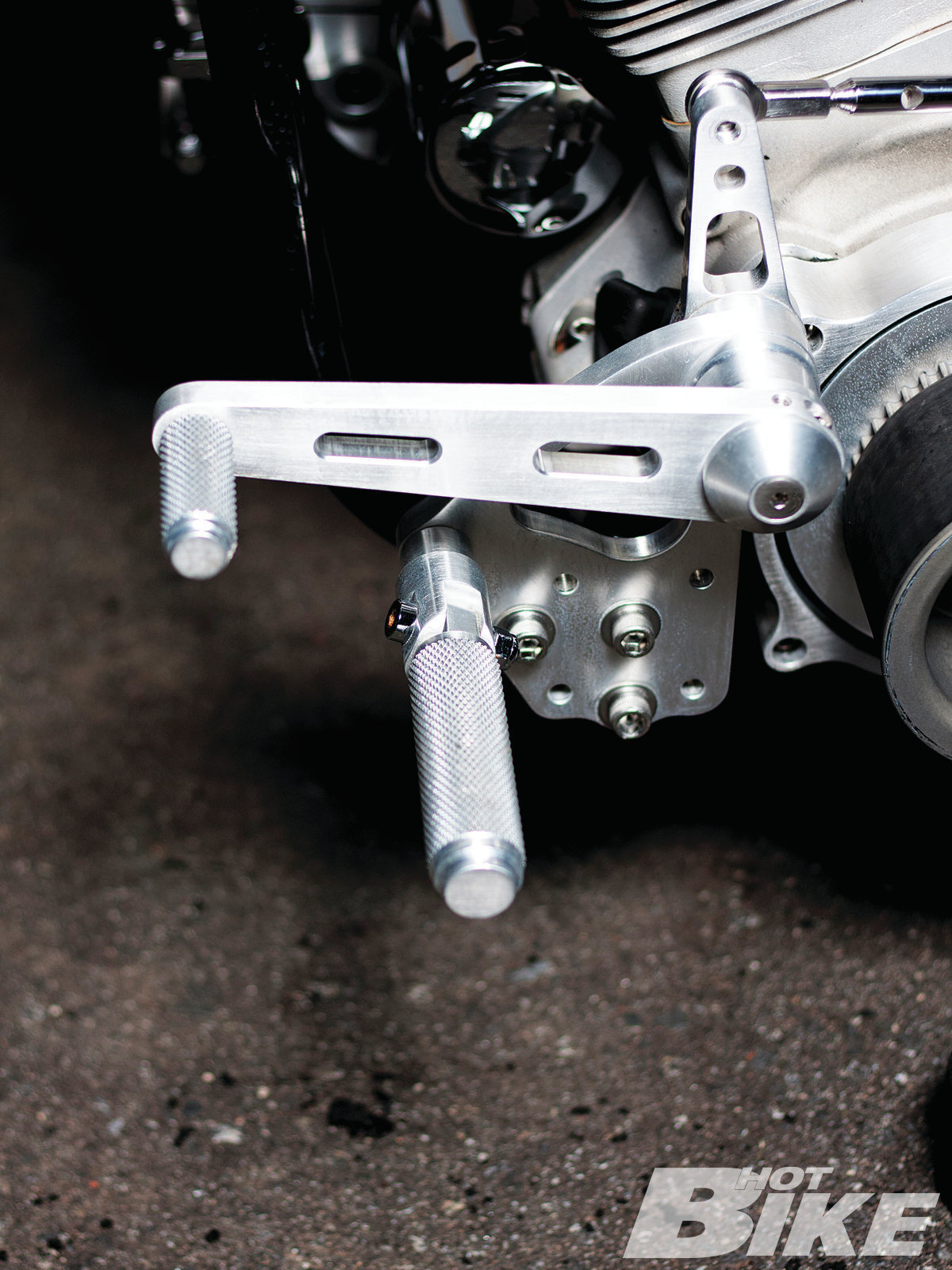 Some builders do it for the money, some for the fame, but there are many guys out there who build bikes because they have a true passion for it. They don’t turn out five bikes a month or try to manufacture parts. They ride until they get tired of that bike and build another one so they can ride some more. That’s the kind of guy Eric Stein is.

Eric is a broad-shouldered, polite, charming, and always smiling 46-year-old family man from Long Island, New York (that was easy to tell from the moment he spoke his first words the first time we met). He moved to Charlotte, North Carolina, after obtaining a job with Fitzpatrick Lawn and Landscape Inc. He builds his bikes out of his garage at home with his wife and two kids watching over his shoulder. Eric finished his latest bike, this clean and simple hardtail, in less than 60 days and this was only his third build.

The first motorcycle he built was stolen when he lived in New York. “With that bike I didn’t know what I was doing; I just started ordering parts,” Eric says. “When that bike got stolen, my wife said, ‘Just build another one.’ I said, ‘Where is this money coming from?’ She said, ‘Don’t worry about it, we’ll get it somehow, just get it done!’”

To Eric the biggest thing that makes his bike special is the seat. Designed and made by Christian Marsh from Xian Leather in New York (think of it like “X-mas” being short for “Christmas,” “X-ian” is short for “Christian”). It features a logo of a tattoo Eric has on the back of his ankle. The tattoo was inspired by the birth of his daughter. The leather wraps onto a Chopper Shox seat pan mounted with Chopper Shox shocks and hardware.

“When I started planning this bike, I got to thinking about my previous bike,” Eric states. “It was a long fat-tire softail that was heavy and bulky. I like to go fast, so with this bike I wanted something fast and more agile.”

This bike has actually been through about three or four different styles. It is based on a Santee frame with 33 degrees of rake and no stretch. “When I started planning this bike, I got to thinking about my previous bike,” Eric states. “It was a long fat-tire softail that was heavy and bulky. I like to go fast, so with this bike I wanted something fast and more agile. I kind of knew what I wanted in my head: that motocross feel.” Eric built this bike with a 41mm H-D frontend and straight bars but wanted something a little more streamlined, adding the skinny trees and knobby Pirelli Scorpion 90/90-21 front tire as you see it now.

Similar to his first build Eric started by researching parts, then ordering everything he wanted. He purchased the wheels and had them powdercoated before they were shipped out. Everything was exactly how he wanted it before it hit his front porch in a UPS box. The slick Mooneyes oil tank with Fab Kevin mounts matches the point cover. Similar to other pieces like the Bare Knuckle gas cap, hub caps, and bars custom bent to Eric’s specs, he came up with his own combination of companies and shop parts to produce exactly what he wanted.

The rear fender was hand-spun by Front Street according to Eric’s specs. “I wanted to show as much tire as possible. I wanted the radius to be as exact as possible.” The rear tire is an Avon 200/60-16. The 16 allows for more ride out of the rubber and a smoother ride for the hardtail; according to Eric, “Trying to save on those pot holes.” Eric did his homework picking and choosing what he wanted so when time came for assembly, he had it done in less than 60 days. The thing that took the longest and was the toughest, except for waiting on parts, was the paint.

As for the little bits and pieces that go into every build, Eric enlisted the help of a friend, Randy Smith, who owns Crafters Metal Fabrications in Monroe, North Carolina. He helped with the welding and some plasma cutting, like the rear fender mounts. Eric met him after working with Smith’s wife about two years ago and now the two ride together as much as possible.

As far as power, the engine is an Ultima 113ci that he got with a six-speed transmission and BDL open primary. It was a package from Choppers-R-Us in Oklahoma.

So far Eric has not had any problems. This past year in Rockingham, North Carolina, he ran it on the 1/8-mile strip coming up with 7.25 seconds in hot conditions. He hopes to run low 7s in better conditions. “Man I abuse the heck out of it, pop wheelies, drag race it, whatever,” Eric says. The carb is an S&S Super G but was sent off to Triple X Carburetor in Texas to make it bigger (48 mm) and polish it.

When it came time for paint, Eric covered his garage in plastic sheeting and sprayed the tins…twice. “Man it was hell. It was late December so I had to keep the garage warmed because it isn’t heated. I didn’t get it right the first time but I did the second.” It took Eric a week of returning home from work and running straight to the garage to finish the Charcoal standard size flake with black outlines.

With all of the different style changes this bike has seen, Eric’s wife again lent some encouragement. She told him he needed to find a new bike or he would eventually keep changing this one until it turned into a mess. So he scored a pretty cheap ’80 FLH shovelhead as a new project. He plans on doing a simple chop. “At least this one will be better to ride with my wife, she rides on that thing,” Eric states as he points at the hardtail. “She bounces all over the place.” Eric wants to make it a resto-mod. “I want to keep some of the old flare but modernize it a bit. Keep it tasteful but modern.” And as is true of his current bike, he finished by saying, “Less is more, ya know?” HB

The Sturgis Buffalo Chip’s Biker Belles event will celebrate women and the role they play in shaping the culture, sport, […]

Round And Round | A Little Time With Performance Machine

01. Pictured is a set of wheel blanks in various sizes ready to be shaped and formed into any of […]