01. Here’s what James got: (A) two 6 1/2-inch speakers with adapter rings, (B) compact 75 watt RMS 2-channel amp, (C) RetroRadio module, (D) Sony head unit with wireless remote, and (E) HotTenna. James got a little carried away when shopping and also picked up one of Biketronics’ CribClicker kits (F), which wires into your headlight and garage door opener and allows you to open your garage door by flashing your headlight. 02. When we arrived at James’ garage, he had already disconnected the battery, pulled the outer fairing off, and removed the two stock speakers (red arrows). You can see where the stock head unit used to be (yellow arrow). 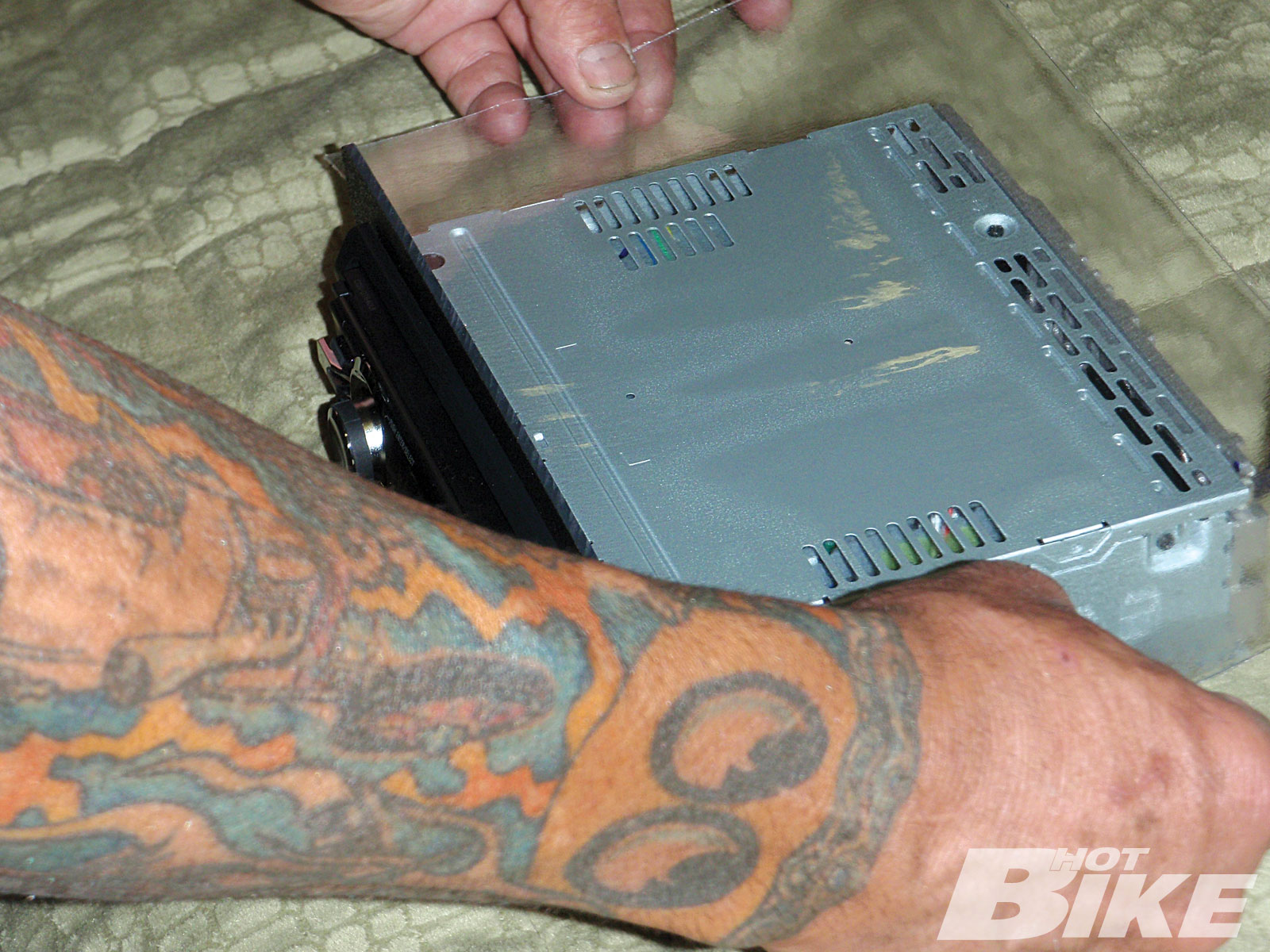 04. Before installing the stereo, James applied the clear film to the top of the stereo to help protect it from dust, debris, and water. 05. The Sony head unit features a detachable face for added security; the face also flips down so you can load a CD. The stereo plays MP3s, WMA, and ACC files; you can also add HD Radio or satellite radio. On the right side of the face (arrow) is a USB port so you can insert a jump drive loaded with music or connect and control the music on an iPod or iPhone with a USB one-wire direct cable. 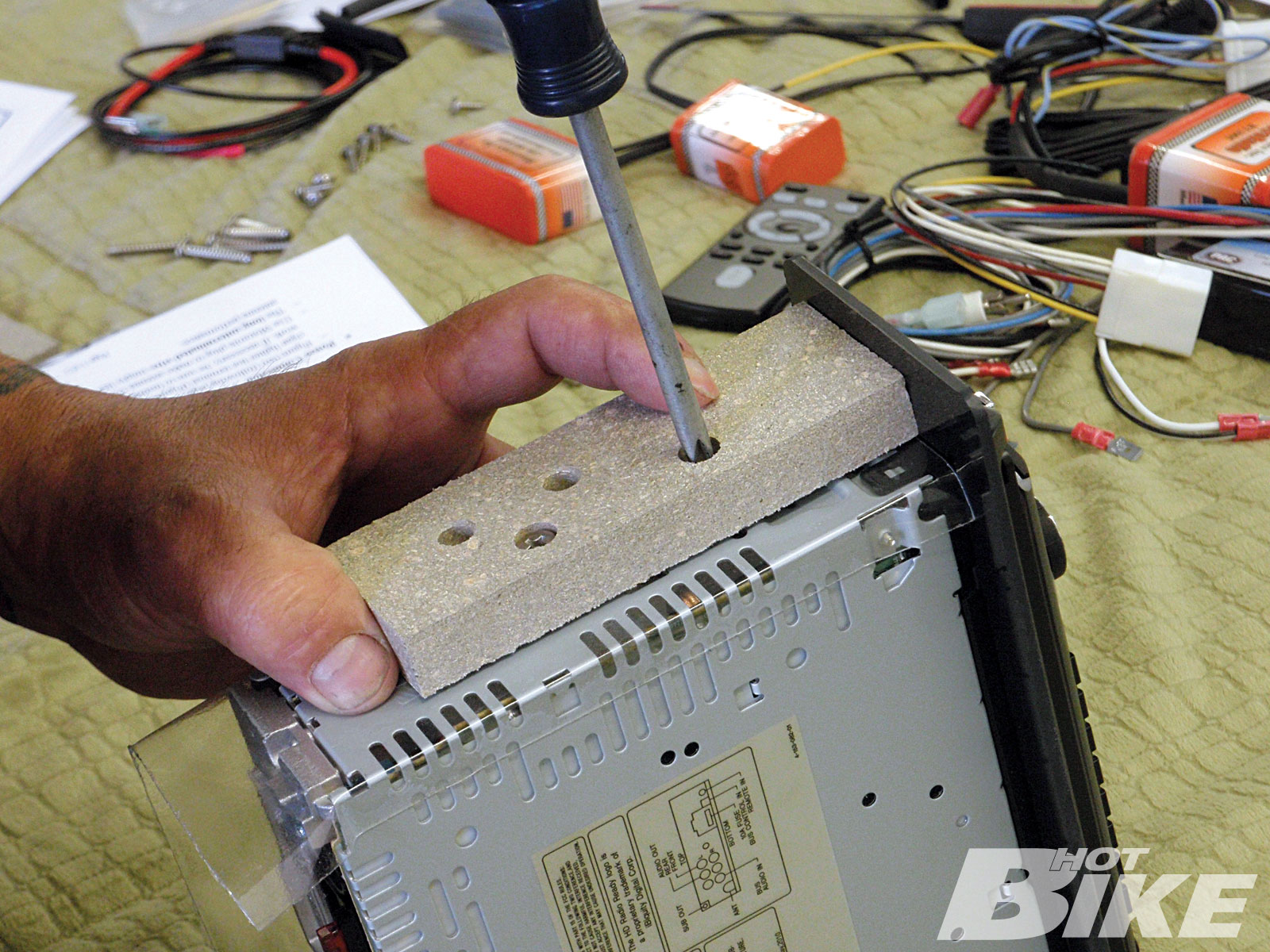 06. Included with the RetroRadio kit are mounting blocks that allow you to mount the radio in the fairing. James secured a block to each side of the radio and then 07. …slid the radio into position 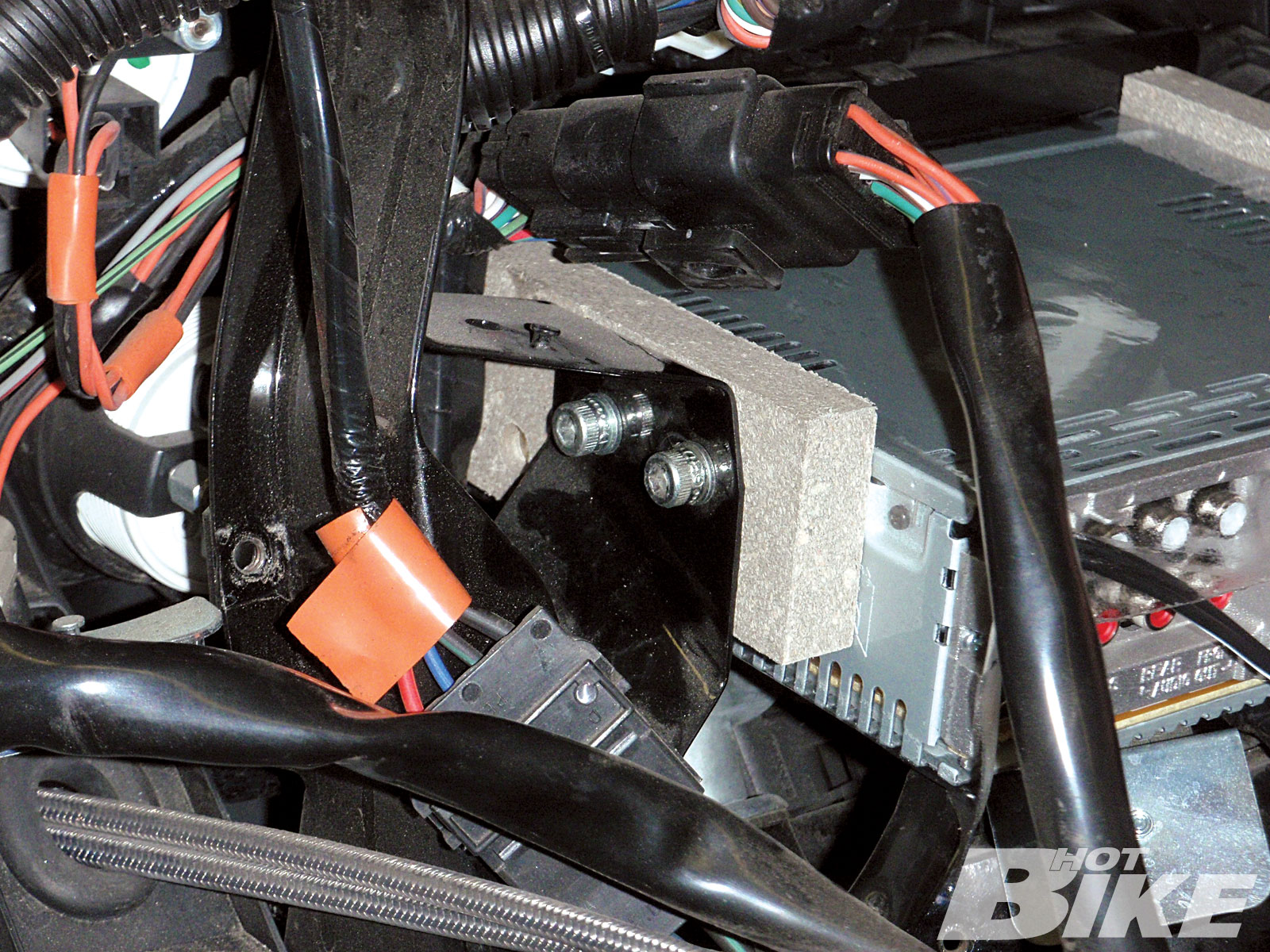 08. Using the stock mounting brackets and the supplied mounting bolts, the stereo was then secured in the fairing.

09. Next, James followed Biketronics’ instructions of orientating the speaker adapter so the decal was at the 12 o’clock position and only used the three indicated screw locations to secure the adapters.

10. He then orientated the speakers so that the terminals faced toward the instrument housings and secured the speakers to the adapters with the four screws that were supplied.

11. Next, the RetroRadio kit module was plugged into the black 23-pin wiring harness that would normally plug into the stock stereo. Made in-house and cast in mil-spec epoxy for durability, this module is what makes installing the Sony head unit a simple plug-n-play install.

12. The supplied wire harness with the black connector was then installed into the back of the stereo and then

13. …the other end of that harness was plugged into the white connector coming off the RetroRadio module.

14. The RetroRadio module was then zip tied in place. Aside from plug-n-play installation with the Sony stereo, Biketronics has modules for other aftermarket stereos as well. The module also allows you to maintain your stock handlebar audio functions and has a Biketronics-exclusive Automatic Volume Control, which will raise or lower the volume as you speed up or slow down. This way when you pull up to a stop sign people won’t know you were just blasting Britney Spears (yeah we know it was on your wife’s iPod).

15. Next, James plugged the black cable with 3mm jack into the back of the stereo and followed Biketronics’ instructions of making sure the cable pointed straight up.

16. Installation of the amp was next. James peeled the adhesive strip backing and mounted the amp on top of the stereo. Biketronics recommends this amp with its speaker upgrades for those who have the shorter or stubby windshield. The company says to try riding on the freeway without the amp first, and then if you feel you still can’t hear your speakers as good as you’d like, you should then add the amp.

17. After following the instruction for hooking up the amp, James connected the speakers.

18. The HogTenna was installed next. The antenna was zip-tied to some existing wiring just above the amp towards the top of the fairing. The AM/FM antenna is compact yet powerful and fits inside the fairing, eliminating the need for an unsightly antenna sticking up at the back of the bike.

19. James tied the antenna’s power lead into the hot terminal on the cigarette lighter and then connected the antenna to the back of the stereo. In this photo you can also see the red and white RCA jacks from the amp.

20. The last thing James had to do was run the amp’s power lead under the gas tanks, along the backbone to the battery

21. …and then connect the lead to the battery, and the audio upgrade was complete.

22. Here’s a glimpse how the new radio, speakers, amp, antenna, and RetroRadio module were all able to fit within the tight confines of the inner and outer Street Glide fairing shells. At this point James decided not to install the CribClicker (we hope to bring you an install article in an upcoming issue). With everything being plug-n-play, installation was easy and really quick. All told, it took maybe an hour to install everything.

23. The real truth came when James switched on the power and the radio and speakers came to life. The face of the Sony head unit radiates a cool blue hue but can be changed to other colors (possibly even matching your gauge lighting). The radio has a three-band equalizer and seven preset equalizers. We’ve been around a lot of baggers with stock audio systems, and we can say we immediately noticed a difference in clarity and quality between the speakers and amp upgrade.

24. After James took a testride, he informed us that he didn’t need to crank the radio all the way up when on the freeway to hear Eddie Van Halen pleasurably plucking away on Eruption. James said the sound was crisp with good bass and that he could really crank it loud without hearing any distortion or popping. James was very pleased with his new personal concert hall; wish we could say the same for his neighbors.

While the used Harley market might be the best or only option for some people to get into a “new” bike, there are some drawbacks. Sure you can find good deals on used bikes, but one of the biggest concerns you have to deal with when you get the bike home is addressing the issues/problems the previous owner incurred. For example, our friend James found a smoking deal on an ’09 Street Glide, the only problem (that he could initially see) was that for some reason it was missing the stereo. The speakers and handlebar-mounted audio controls were there but no head unit. After riding for a few weeks with a big void in the center of the fairing and the speakers visually teasing his ears, James began seeking out a head unit. After scouring the internet, he eventually ended up at Biketronics where he not only found a Sony head unit, but also a plethora of audio accessories to further upgrade his sound system.

Offering the option of audio kits or the ability to pick the components you want/need a la carte, Biketronics makes shopping for booming bagger beats a breeze. With its components and accessories designed by riding enthusiast Mike Meehan, Biketronics’ electrical engineer knows exactly what the Harley rider needs for open road radio enjoyment: high-quality, rugged, and compact components that feature easy plug-n-play installation. Almost all of Biketronics’ audio equipment is made in the US (except for the head unit and speakers) and are backed by the company’s lifetime warranty (the stereo features the manufacturer’s warranty).

Pursuing Biketronics’ website, James decided that since he was going to be working behind the fairing, he might was well upgrade the stock speakers and add an amp. When he was done shopping, James had completely improved every aspect of his Street Glide’s auditory output for just more than $1,000. James got a Sony CDX-GT650UI head unit, ($159.99), Biketronics’ BT1002 RetroRadio install kit ($219.95), Biketronics’ BT4541 Titan Amp/Speaker kit ($599.95), and a Biketronics BT87 HogTenna ($39.95). Often times Biketronics runs specials on its website where you can save $50 if you buy speakers and an amp together rather than separately, or free shipping. Follow along as we shoot over James’ shoulder as he installs his new Biketronics equipment.

This bike build was a retirement gift to myself. Jason Sweeney of Sweeney Inc. was called to build my dream/retirement […]

They say racing improves the breed, but does that include smoky burnouts in a bike-show parking lot or hauling ass […]