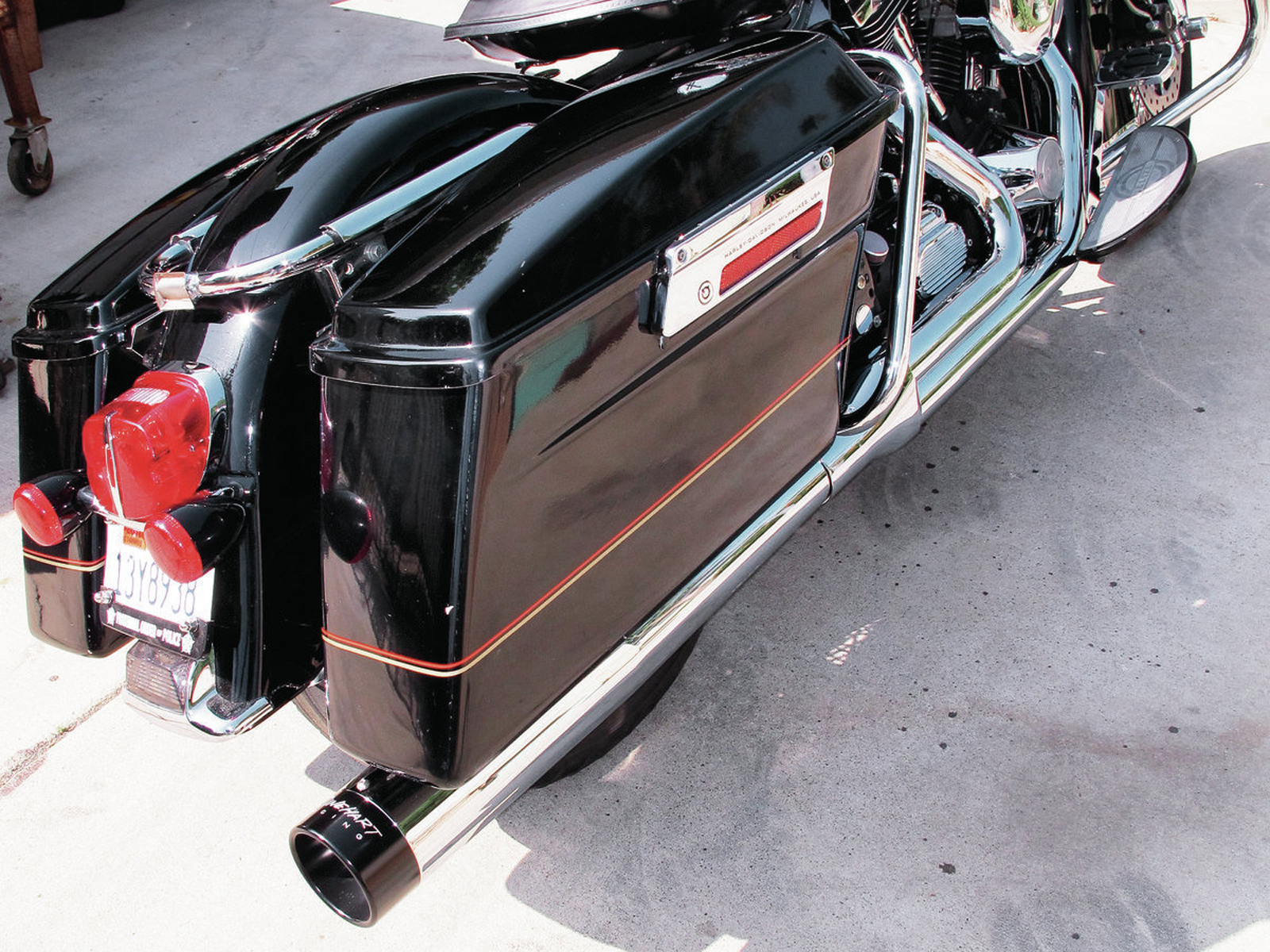 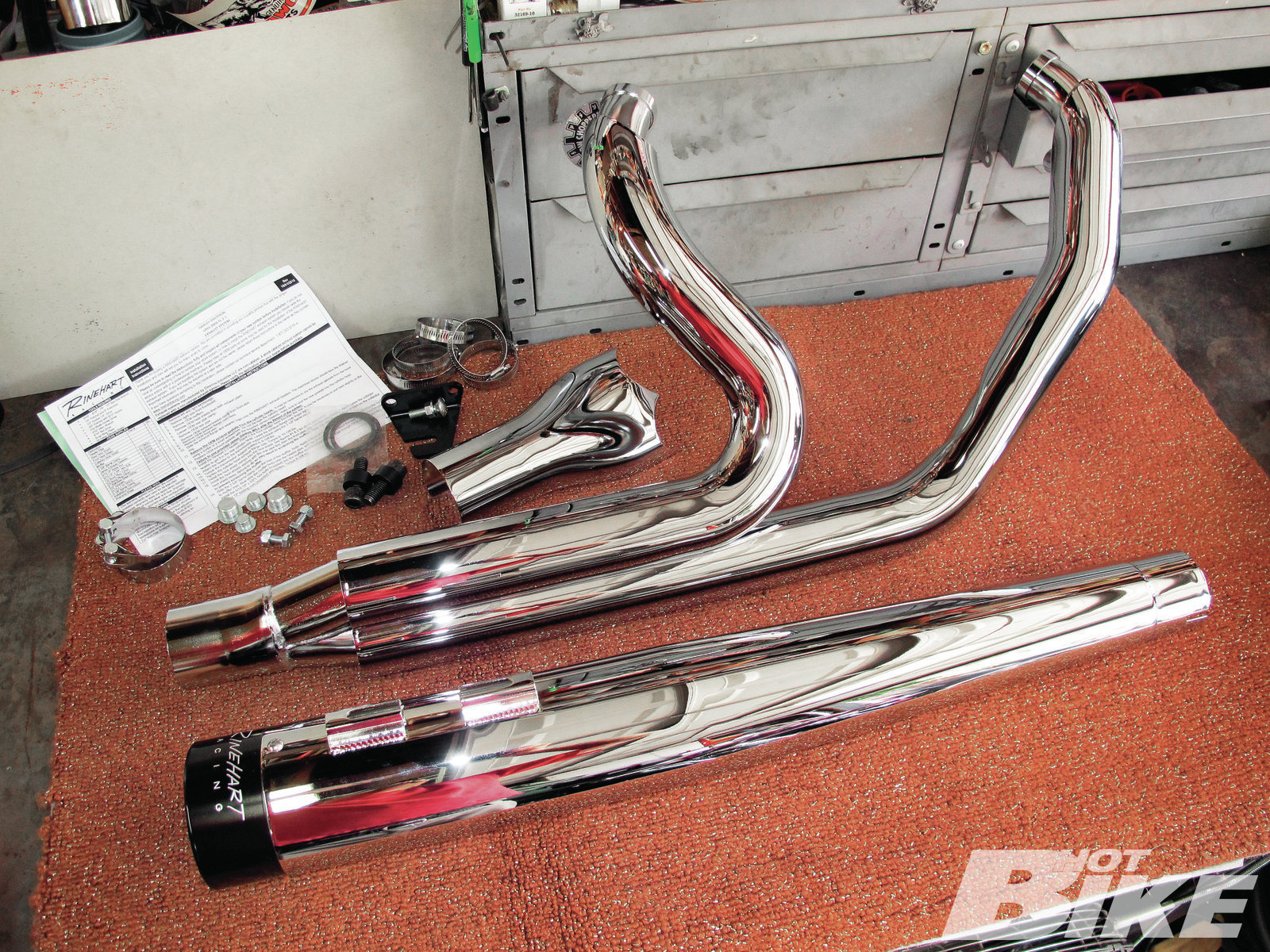 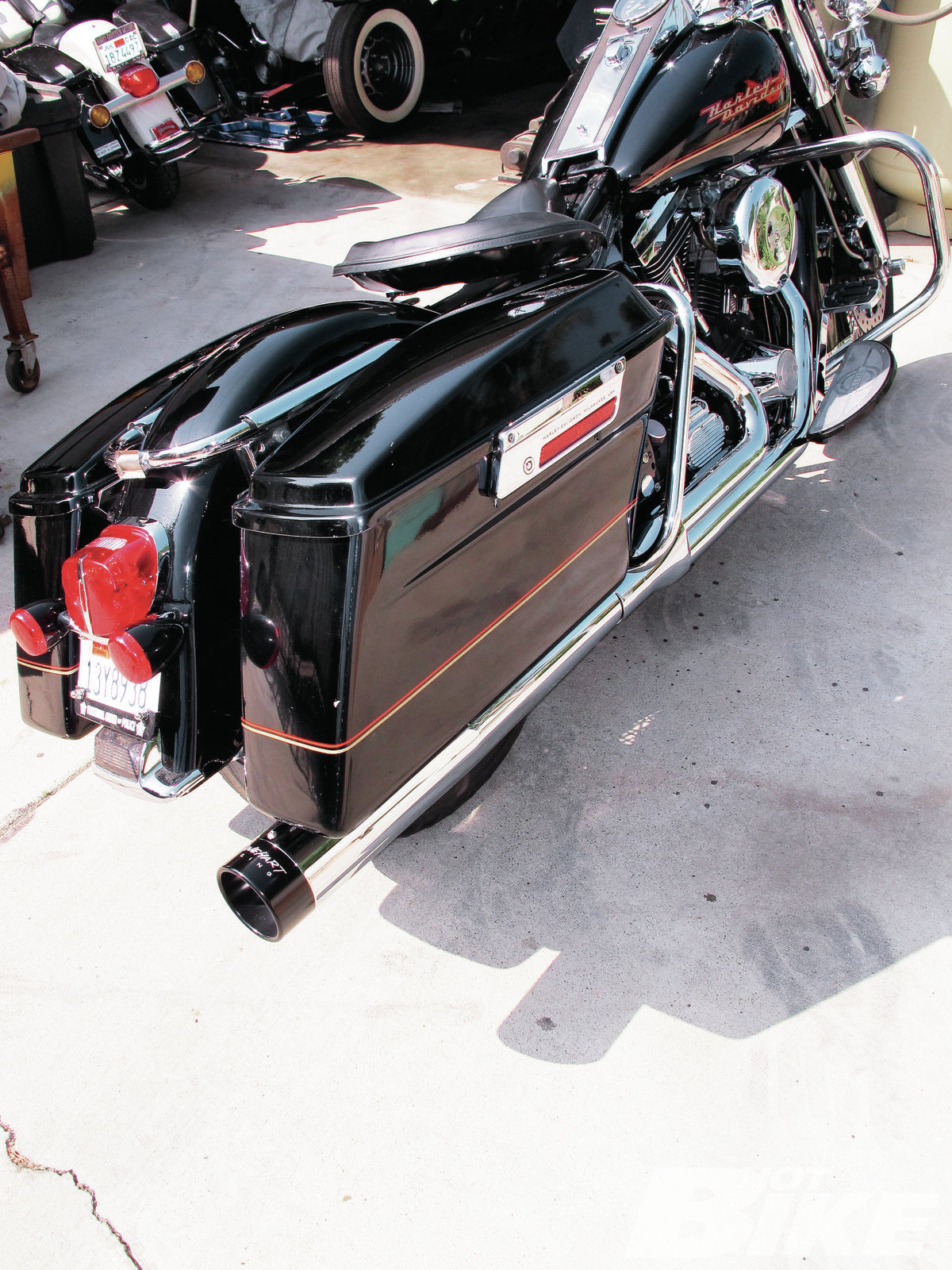 Rinehart’s ’95-06 Road King 2-into-1 exhaust is available in chrome or black ceramic with chrome muffler and heat shields. To retain a bit of the bike’s “dressy” look, we opted for the all chrome kit (200-0106). 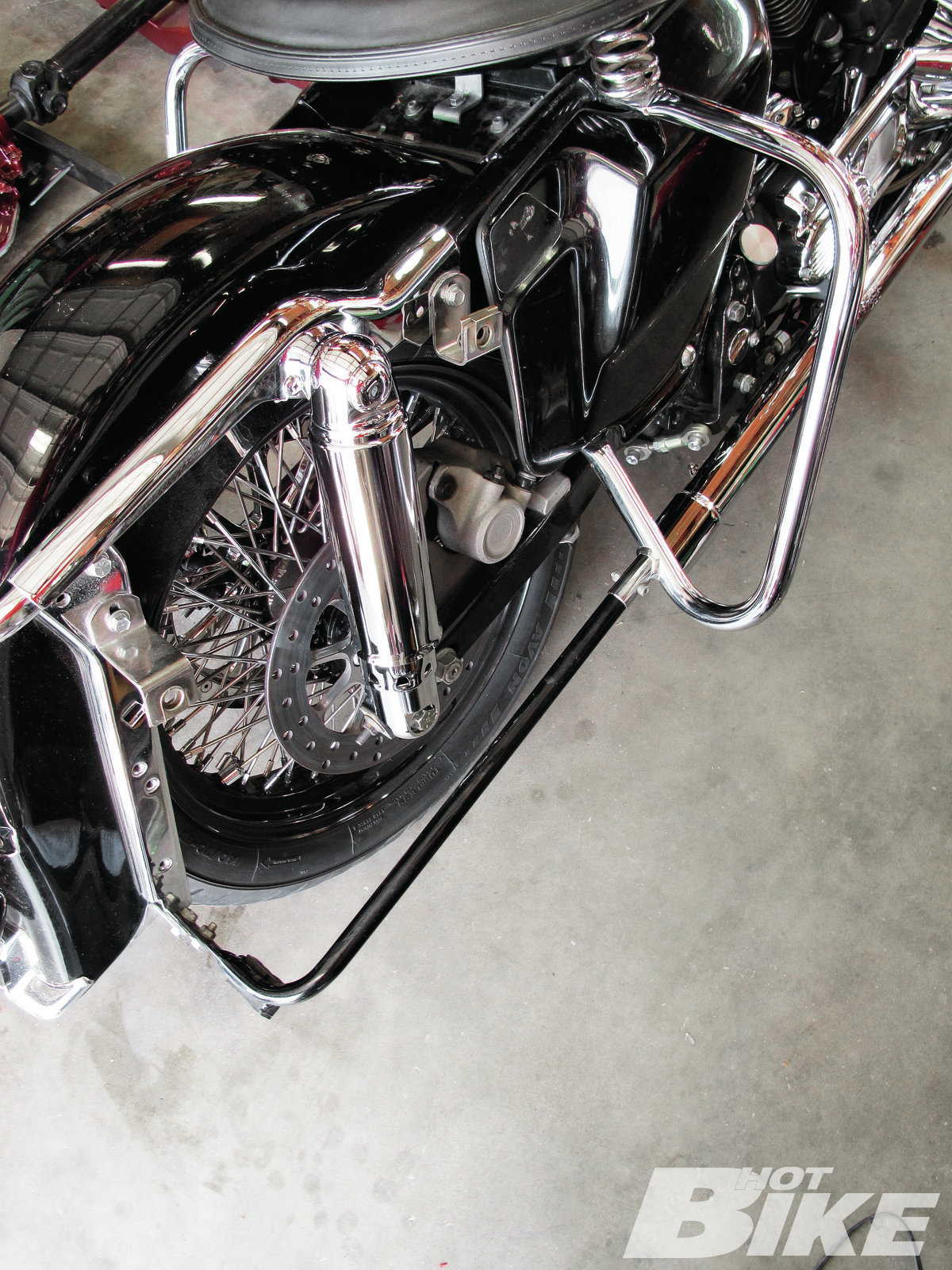 **01. **Working back to front, both bags were removed (leaving the lower-right-side mounting bracket in place) followed by the mufflers. 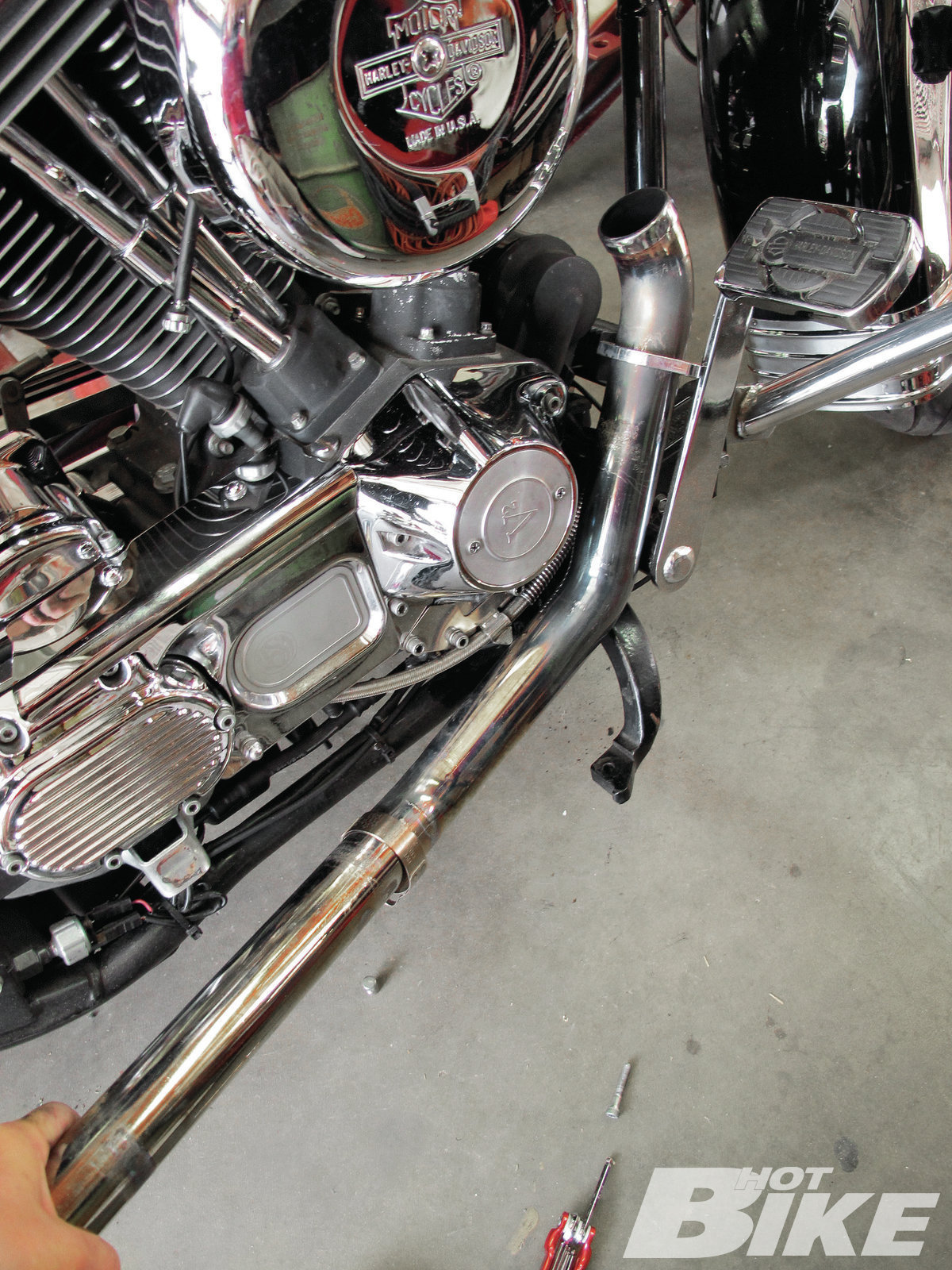 **02. **In order to get the front head pipe off, the floorboard needed to be removed, which had to be done anyway—in order to clear the new pipe, it has to be moved outward with a supplied spacer. 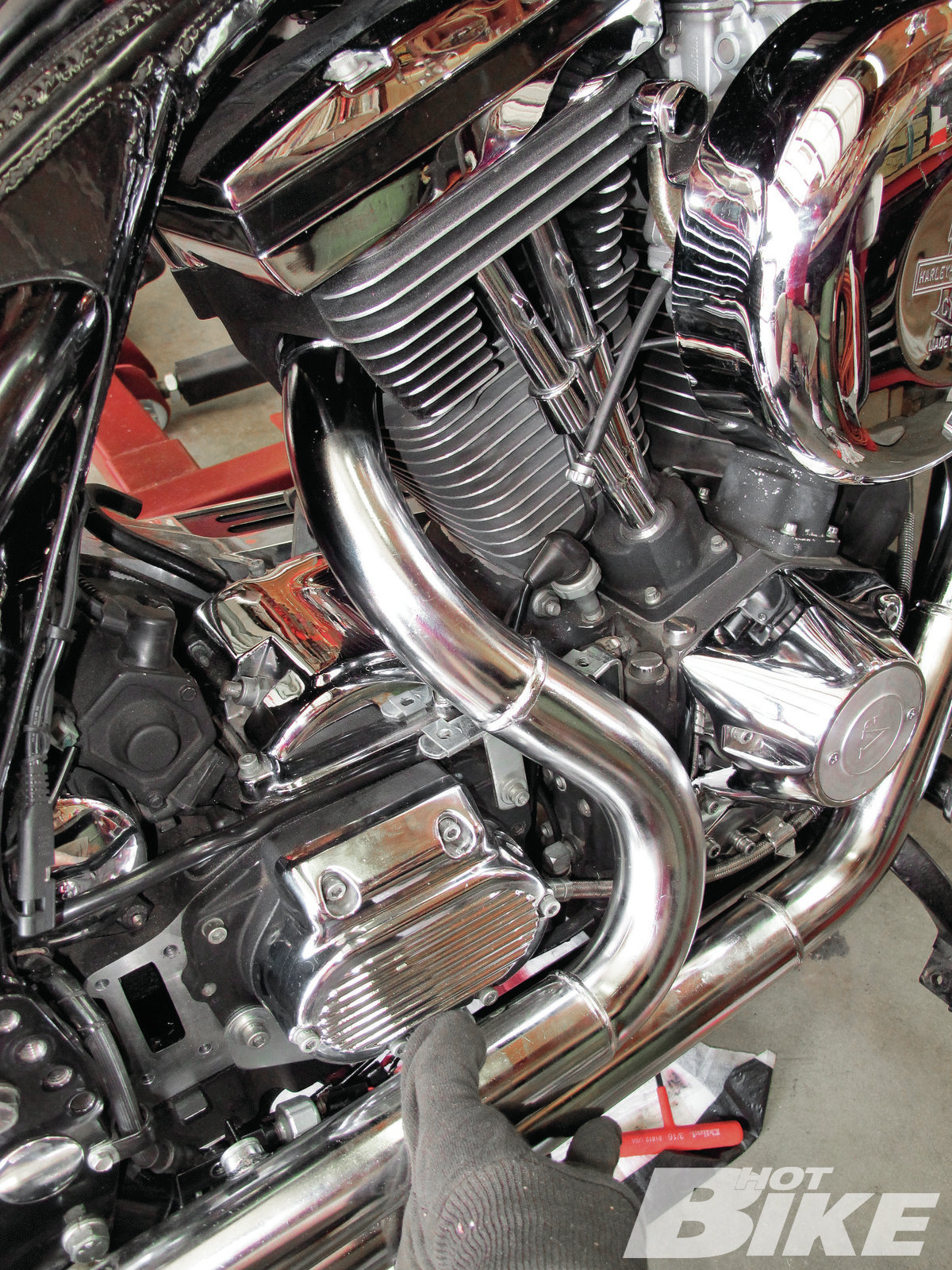 **03. **Prior to test-fitting Rinehart’s head pipe, both cylinders were masked off to prevent any scratching in the process. During mock-up it became apparent that 1) the bike’s “dressy” accessories, the chrome trans cover, had to come off in order for the rear head pipe to fit, and 2) the oil filler cover also had to be removed in order to replace a broken transmission support bracket. 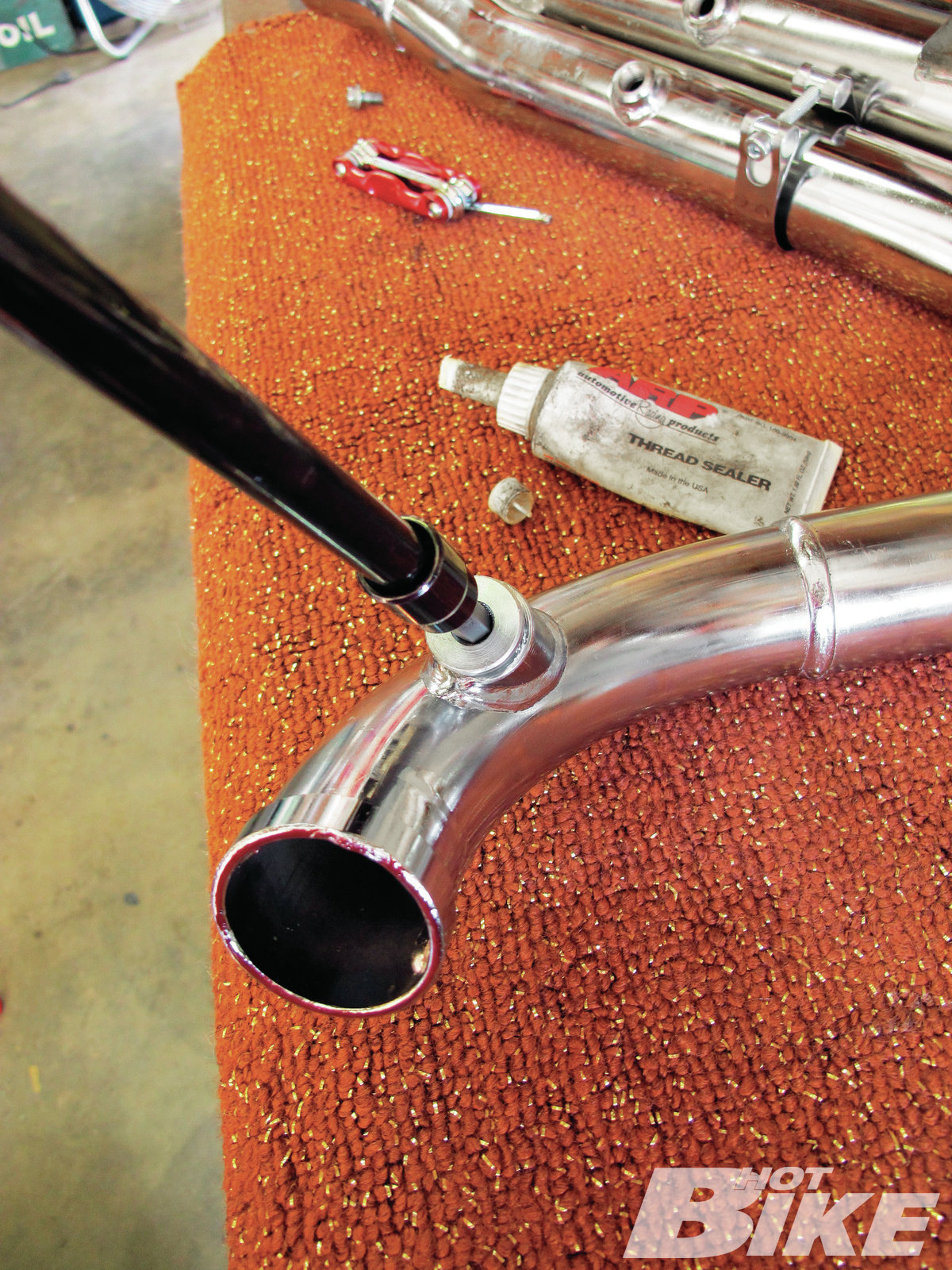 **04. **With the fitting sorted out, the head pipe was prepped for installation, first by threading both 02 bung plugs into their respective ports. Next, the OE exhaust flanges and retainer clips were slid in place. Also, Rinehart supplies James Gaskets exhaust gaskets with its 2-into-1 exhaust systems—they must be used in order for the pipes to fit properly. 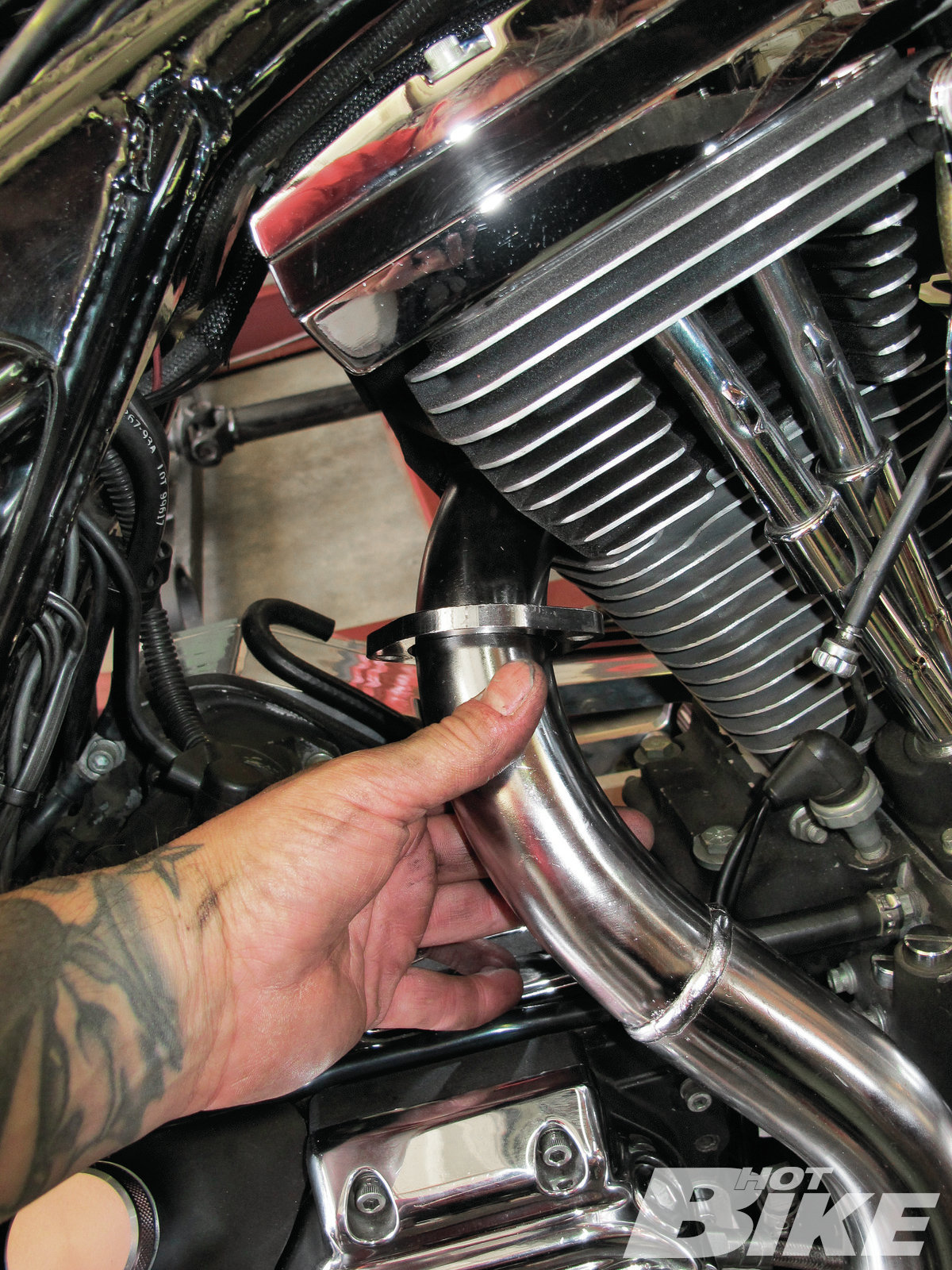 **05. **Since the Branch-O’Keefe heads are new, the OE gaskets came out easily and in one piece; there were no worries about the condition of the exhaust ports. The Rinehart head pipe was then installed starting with the front cylinder. With the gaskets in, the rear head pipe took a little coercing (by hand—don’t use any tools to pry it) before it seated into the head. 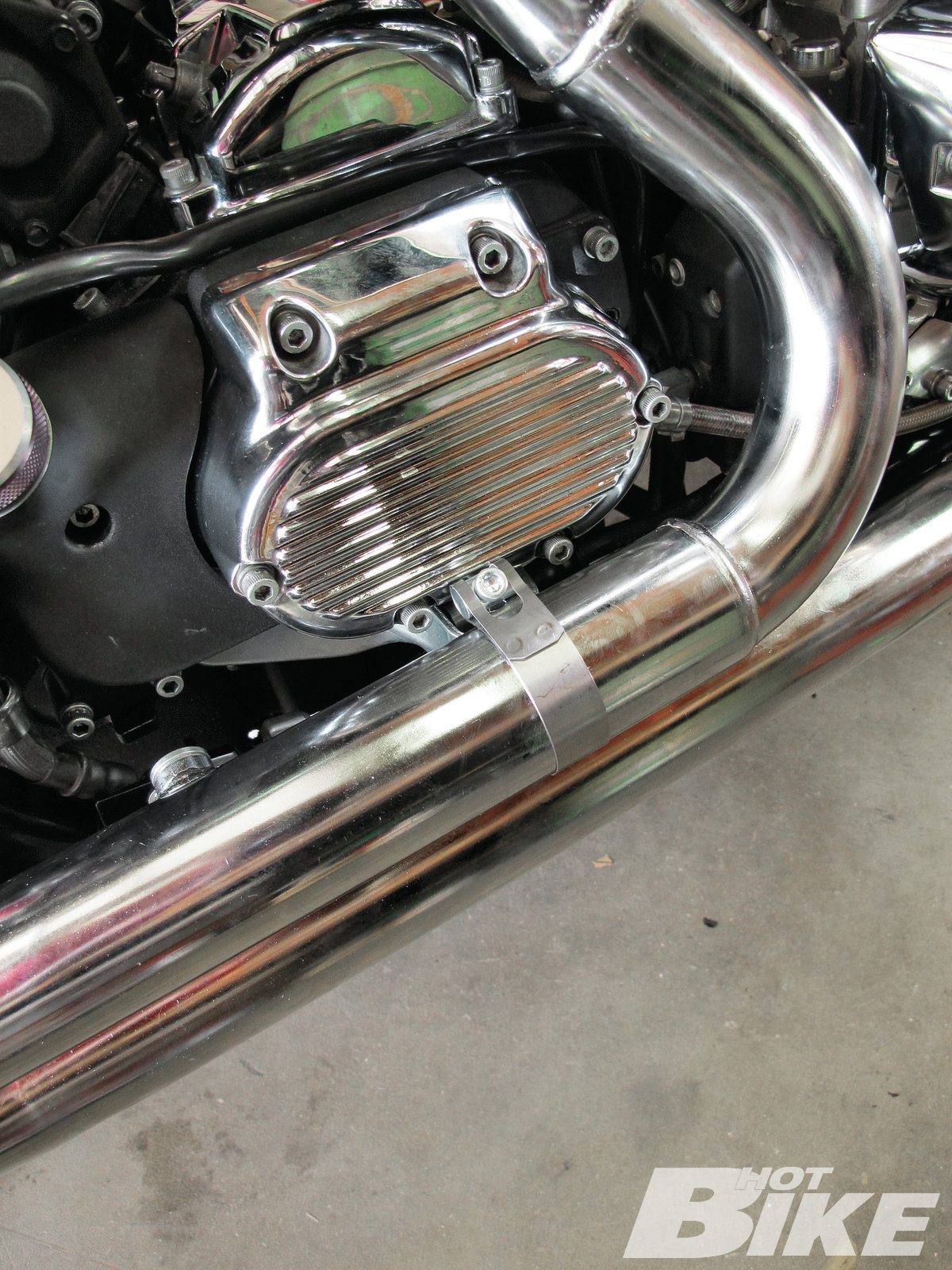 **06. **With the head pipe in place with the exhaust flange nuts finger tight, the rear cylinder pipe was attached to the tranny bracket with the supplied barrel clamp. Once that was done, the head flanges were torqued to 12 lb-ft. 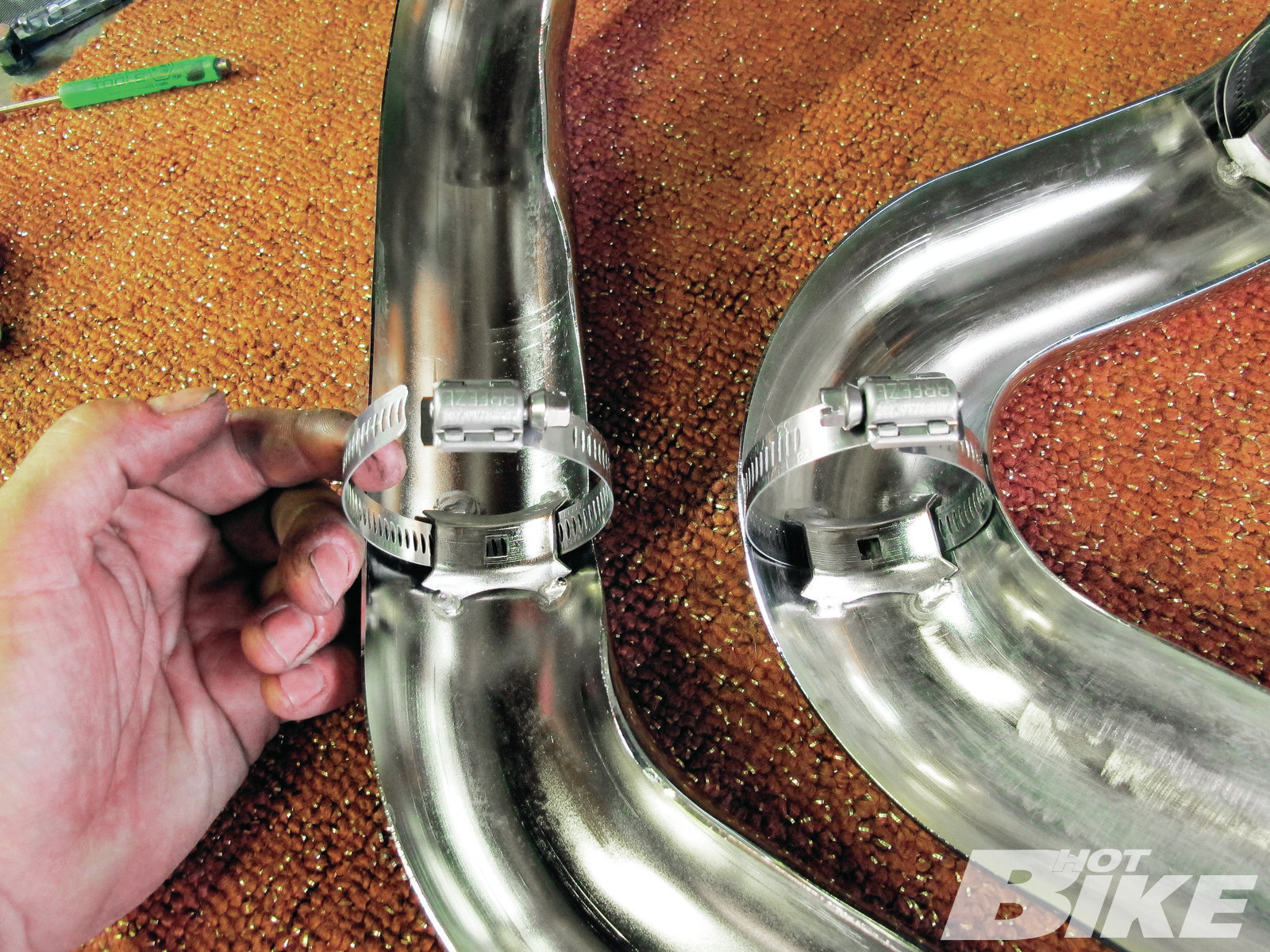 **07. ** The heat shields needed to be installed in a particular order (rear, front, then collector), and the clamps had to be inserted in a specific manner in order to access/tighten the bolts. After placing the hose clamps in their designated locations, the heat shields were installed.

**08. **Masking tape was used on the ends of both head-pipe heat shields so that the collector heat shield could be fitted, adjusted, and tightened (with the muffler on) without causing any scratching.

**09. **Prior to installing, Ultra Copper high-temp sealer was applied to the inlet of the muffler, then the barrel clamp was slid in place.

**10. ** Using the OE mounting bracket plate, the muffler was attached and both the supplied lock nuts and barrel clamp were torqued to 10 lb-ft. Now with both ends of the exhaust secured, the collector could be adjusted and tightened down.

**11. ** Before firing up the motor, the exhaust needed to be wiped down completely from front to back to remove any and all fingerprints/smudges.

**12. ** The sound of the Rinehart 2-into-1 was one thing—seeing the result on Quaid’s dyno was the real happy ending.

**13. **The Rinehart 2-into-1 yielded better horsepower results than the true duals. Before the Rinehart installation the Road King produced 68 hp and 83 lb-ft torque with the duals. After the Rinehart exhaust was installed the bike produced 75 hp but stayed the same at 83 lb-ft of torque. Also, with the 2-into-1 the Road King seems to accelerate more smoothly throughout the powerband.

When you go through all the trouble of installing new pistons, throwing on a new set of heads, and swapping out camshafts, the worst thing that can hamper your “happy ending” is getting a less-than-expected horsepower gain. Don’t let that make you reconsider all the time and money you’d just spent, ’cause what it all really boils down to has nothing to do with what you’ve done—it has to do with what haven’t done: exhaust.

While “true” duals definitely give a V-twin’s trademark sound a real improvement (at least in the ears of the operator!), the same can’t always be said on the performance side. Unlike a V-8, splitting the cylinder head air outtake can have the opposite effect, ultimately taking away the backpressure the motor needs. That was the case with our ’96 Road King: after all that work at Bennett’s Performance, once the motor was freshened and buttoned up, we immediately noticed that the existing dual (un-muffled) exhaust wasn’t restricting flow as much as it was restricting horsepower—68 hp @ 4,800 rpm is quite respectable all things considered, but this motor still had some untapped power to be achieved.

In order to unleash its full power, we installed a Rinehart 2-into-1 complete exhaust system. Along with giving the Road King a completely different sound (much throatier), it also gave it the ability to put out a more respective 75 hp, which we found out thanks to some dyno runs at Quaid Harley-Davidson in Loma Linda, California. The peak torque didn’t change much, but what did was the overall horsepower range, giving the bike plenty of pull through all the gears. HB

Just as there is more than one way to skin a cat, there are a multitude of ways a motorcycle […]

Custom 2003 Harley-Davidson Sportster | Doin’ It In The Dirt