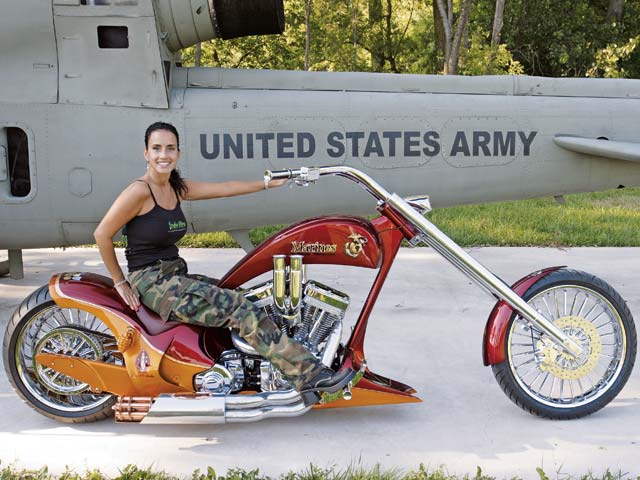 ** Snake Alley salutes the military**Marty Behan, president of Chicago’s Snake Alley Customs, was glued to the TV set while his son Christopher was in Iraq serving in the U.S. Marines. Now that Christopher is home safe and sound, Marty wanted to honor our military’s commitment to preserving freedom.

Marty wanted the blessing of the military to use the various armed forces logos on the side of his bikes. After eight long months, he was given DOD approval to use the military emblems. Working with Larry Williams, the first bikes produced pay homage to the Marine Super Cobra and Army Apache helicopters. There’s also another long, fat, and low “Tank” bike named “the Grunt.” Dedicated to those who served, the bikes will have dog tags, rank service medals, and ribbons incorporated into their designs.

Portions of the proceeds from sales of the bikes will be donated to the USO. For more information, visit www.snakealleycustoms.com

For the model year 2006, the Buell Motorcycle Company came across an unfamiliar fork in the road. Tossing conventional wisdom […]

Easily add performance, horsepower and style to your ride with precision Billet Air Cleaners. With a unique design that helps […]

“I can see it as a single issue publication every year, but a monthly magazine? I’m not so sure.” That […]