Speed’s Spotlight | Service With A Smile! 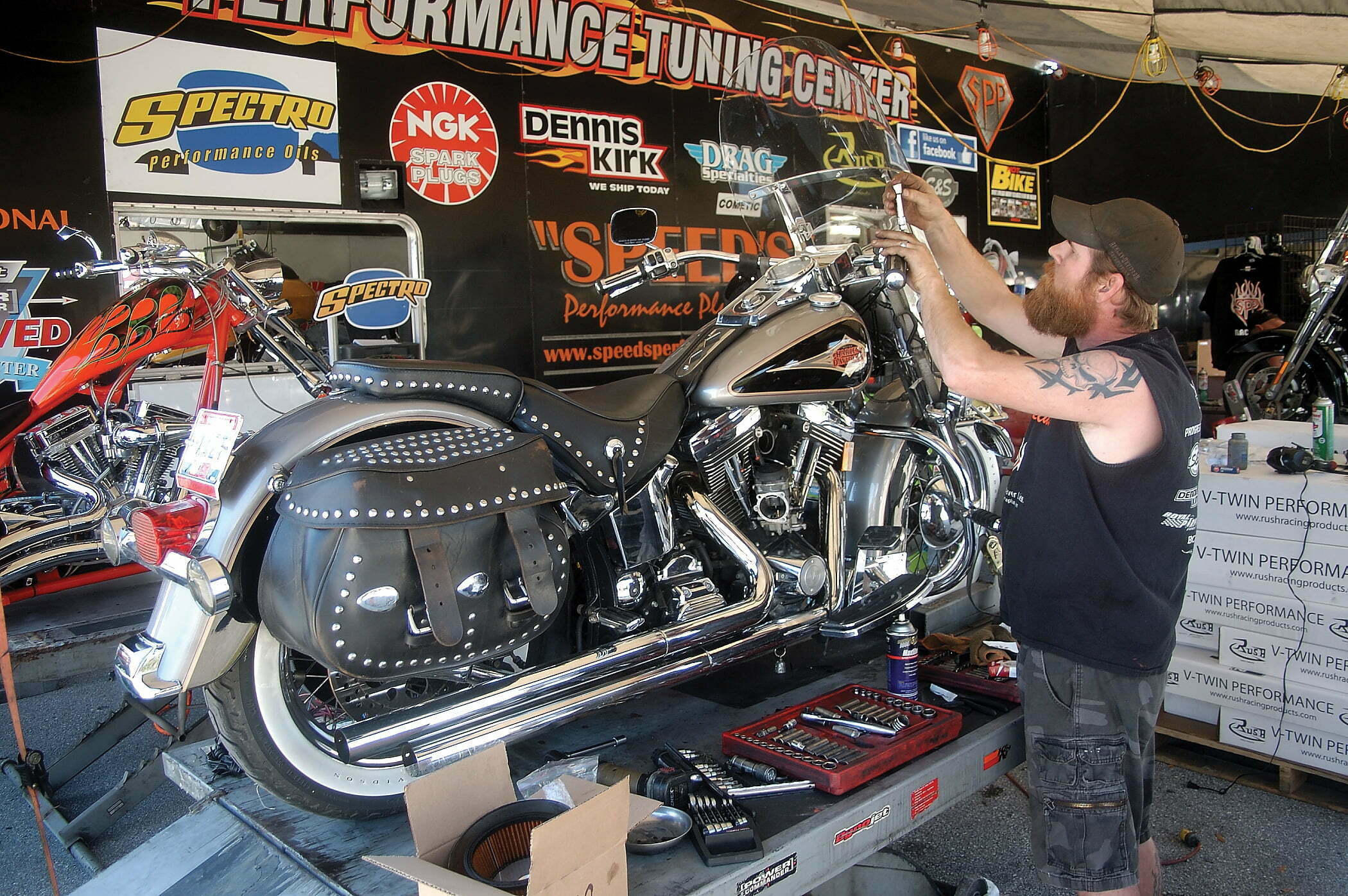 Riders of a certain age will remember the days of full-service at the gas pump and even better service inside the work bays. An oil change every 3,000 miles that included full bumper-to-bumper service was routine. Well, that’s gone now, replaced with mini-marts and 64-ounce big gulps with a hot dog. In the motorcycle world, though, service can still reign supreme, and at the start of any riding season that front-to-rear service session is more than routine—for any chance at a trouble-free season it’s mandatory.

“And we do this sort of thing all the time,” says Jamie Hanson at Speed’s Performance Plus. “Especially during first few stops on our schedule, early in the season.” Jamie and the SPP team have that full-motorcycle checkup down pat too, so whether you generally take care of this yourself (and any competent DIYer armed with his bike’s service manual shouldn’t have a problem) or it’s something you’d rather turn over to the pros, here’s how Speed’s goes about it. For starters, and at a minimum, there’s the oil-and-filter change, and a couple quarts bought at that mini-mart won’t get the job done.

“And if you haven’t already switched to synthetics,” Jamie goes on, “you should. There’s a lot to be gained.” There are plenty of good choices on the market, and the guys at SPP have tried them all, finally deciding on the Spectro Platinum 4 Full Synthetics—with “motorcycle” in big, bold letters on the bottle. Synthetics work great in the transmission and primary too—more fluids to be changed with a major service. Clutch action will get smoother and more predictable and the shifting easier. You’ll want a quality oil filter too, and there are some good ones available. But spending a few more bucks for a cleanable/reusable metal-mesh oil filter is something to think about. Being washable and reusable just like that high-flow air filter (which should also be serviced now) means this will be the last oil filter you’ll ever buy, but more importantly the filtering is first rate. The ones SPP offers even include rare-earth magnets in the base to trap metallic particles and debris. As an added bonus all this comes with a finned-aluminum canister that becomes, in effect, a mini oil cooler.

If it’s a pre-season service we’re talking about here’s hoping the bike was parked with a full tank of gas. “And treated with a good stabilizer and ethanol guard,” Jamie adds. And if it’s a carbureted bike the carburetor and fuel lines should have been run dry. Either way, now’s the time to grab some wrenches and “nut and bolt” the bike front to rear. Exhaust systems, Jamie says, are notorious for loosening up, but don’t stop there. And while you’re making sure everything is nice and tight, pay special attention to the tires and brakes. Look at the tread depth and thoroughly inspect the sidewalls for cracks or bulges. Check the inflation, and check it often during the season. And here you’ll want to follow the tire manufacturer’s recommendations because for best performance and life they’ll quite often call for a bit more pressure than OE.

Look over the brake pads and rotors and carefully inspect all the lines and fittings. Check the level and top-off the master cylinders, and spend some time with the drive belt assessing both condition and tension. You’ll want a good tension gauge for that. Throwing in a fresh set of spark plugs is another good move and maybe even a set of new wires to go with them. SPP likes the NGK Iridiums, by the way.

All this is pretty straightforward stuff, but here’s a thought: Even if you regularly do your own service work, sometimes it’s smart to let a trained tech take a look at your bike too. He might spot something you’ve overlooked or just gotten used to over time. Is the clutch adjusted correctly? Are any of the cables and linkages stiffer or looser than they should be? An ounce of prevention, as they say, is worth a pound of cure. The next time the Speed’s Performance crew is in the area maybe roll your bike onto one of their lifts for that full-service checkup. A little time and a few bucks—way less than what a dealership charges, by the way—is an even trade for a trouble-free season. Think of it as service with a smile.

Handy Motorcycle Lift For Your Garage