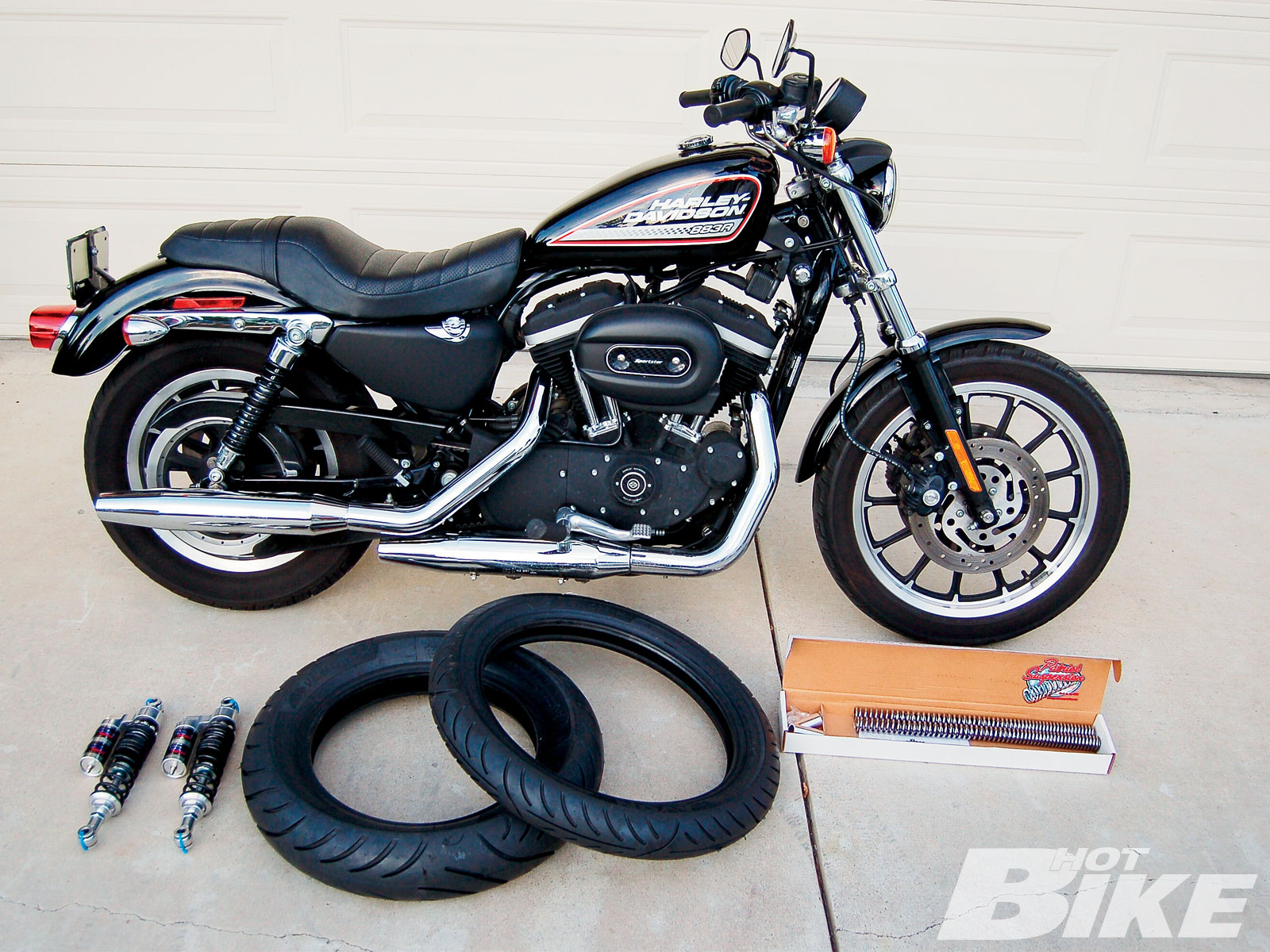 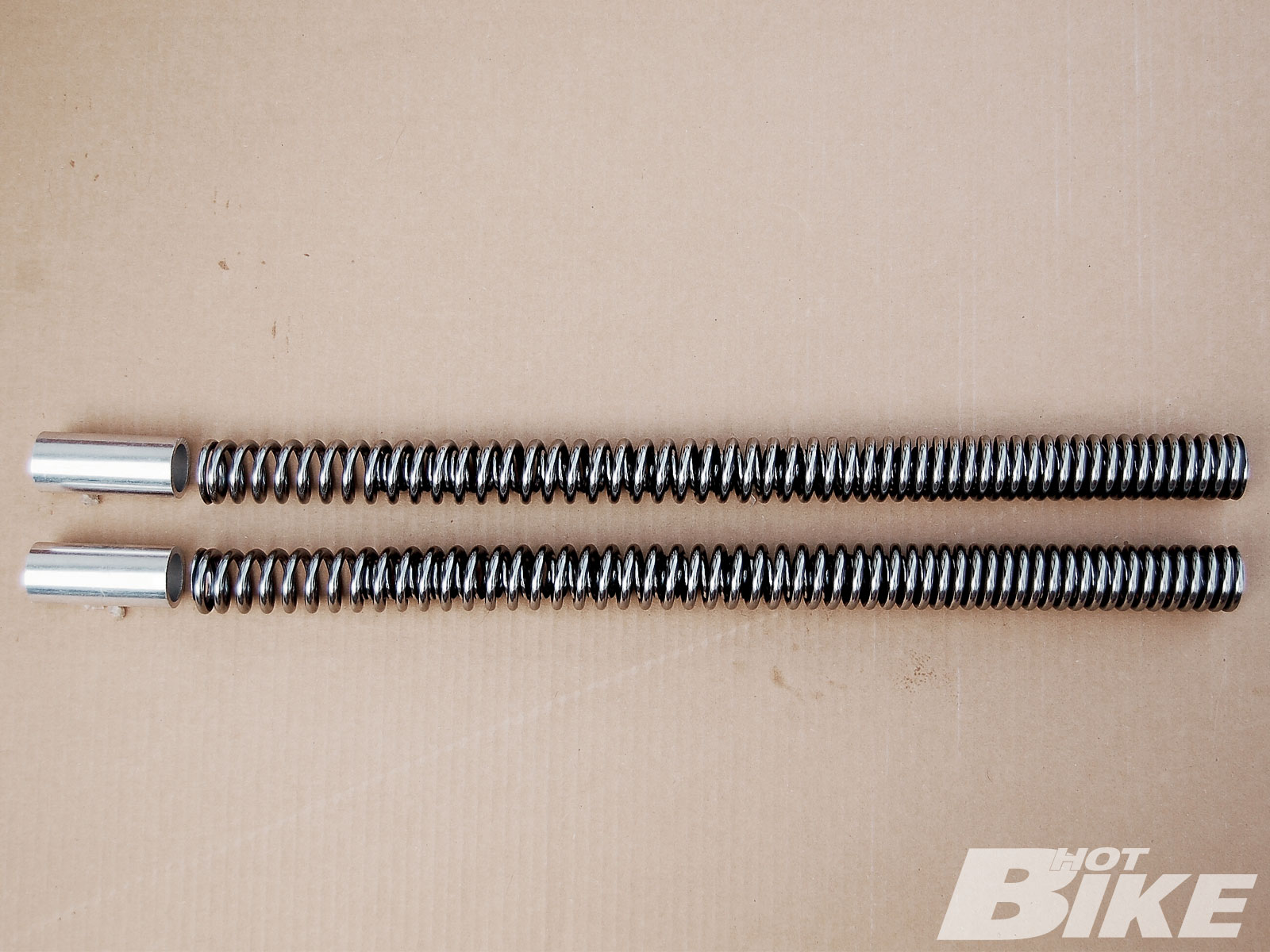 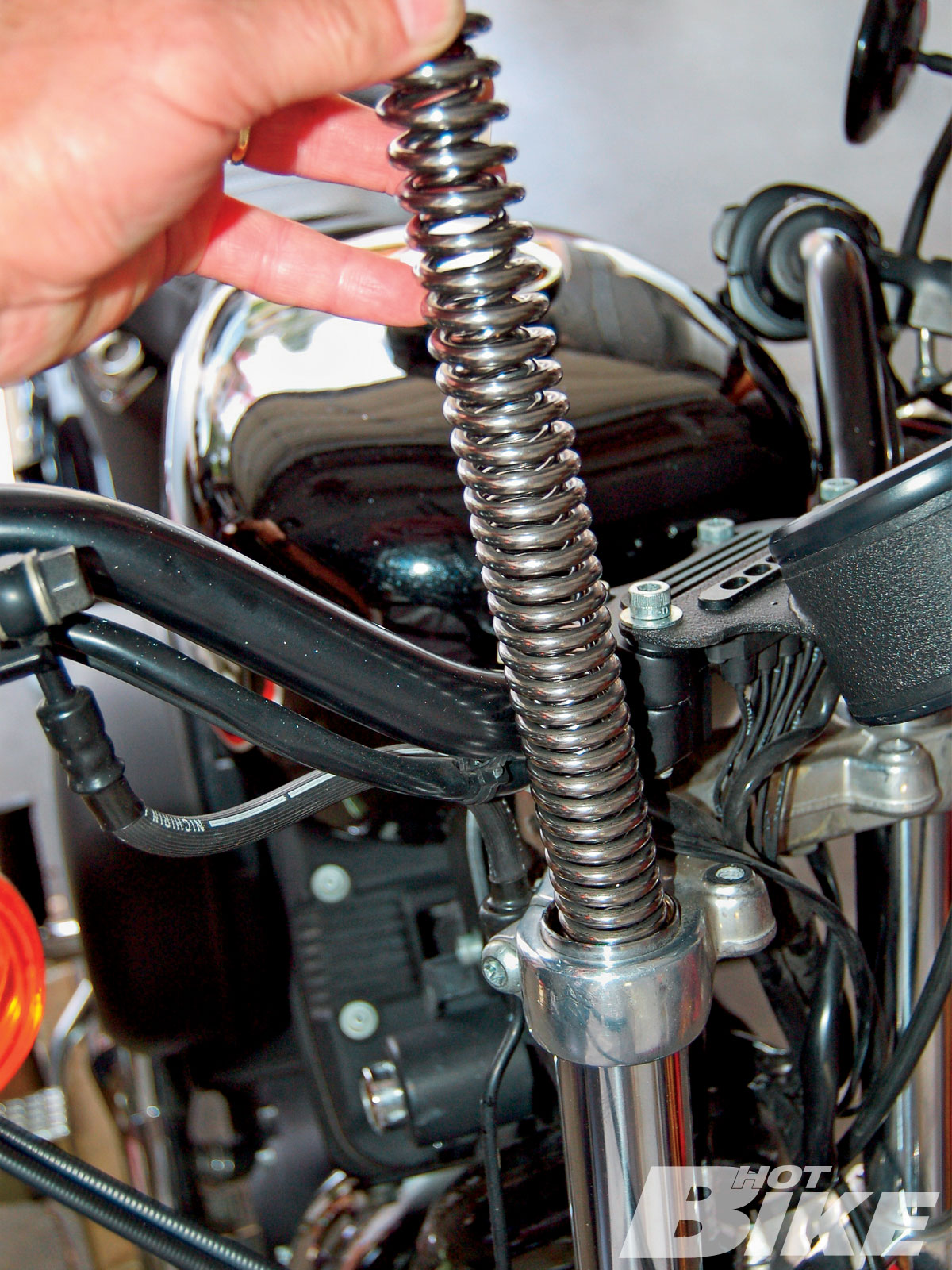 03. After elevating the bike with a lift, the fork oil and stock springs were removed. New Patriot progressively wound springs were then slipped into each fork leg. 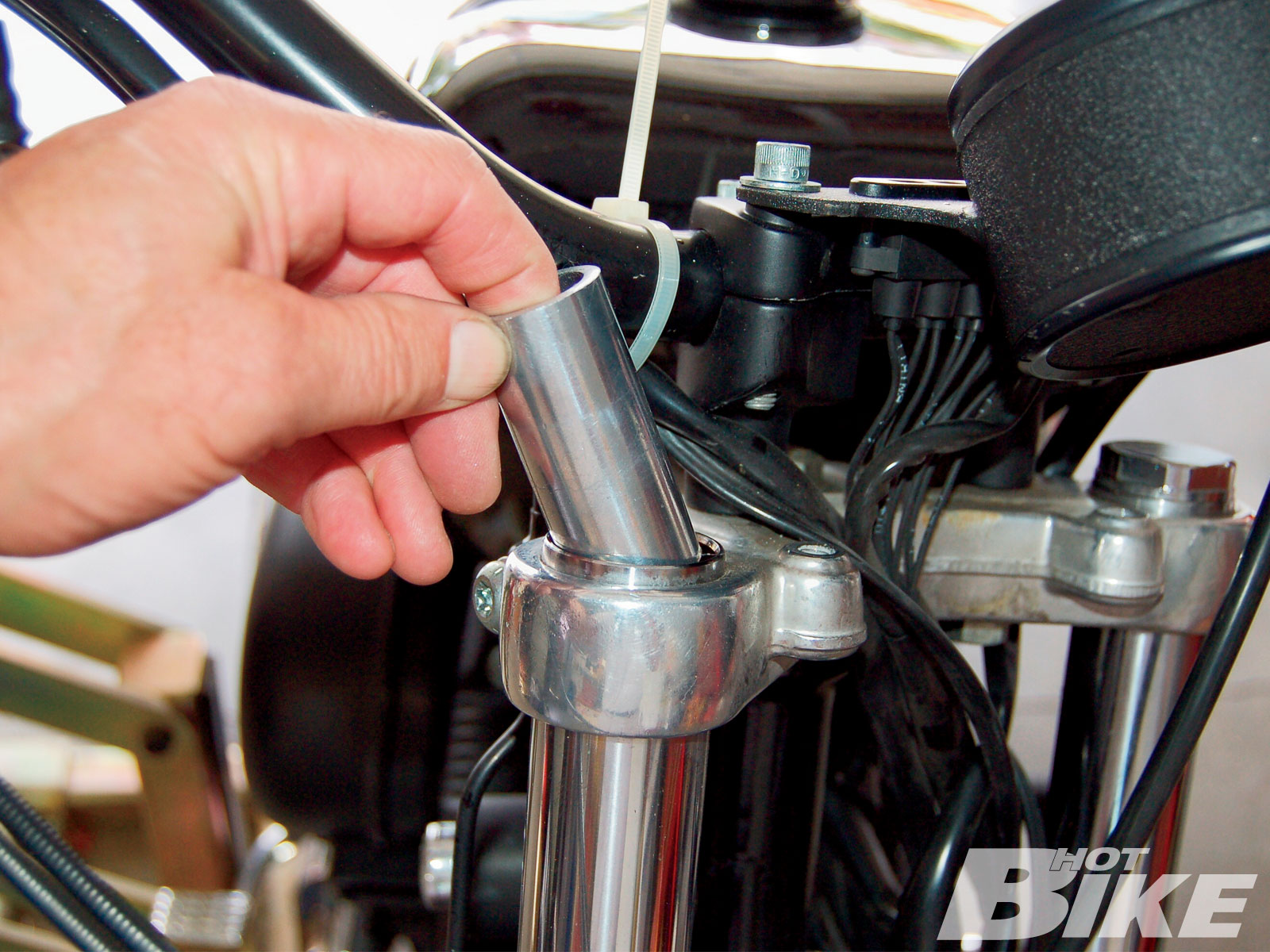 04. The proper amount of fork oil was poured into each leg. With the fork legs fully extended, the spacers were then inserted. The tops of the spacers were shaved to keep them flush with the top of the fork tube. 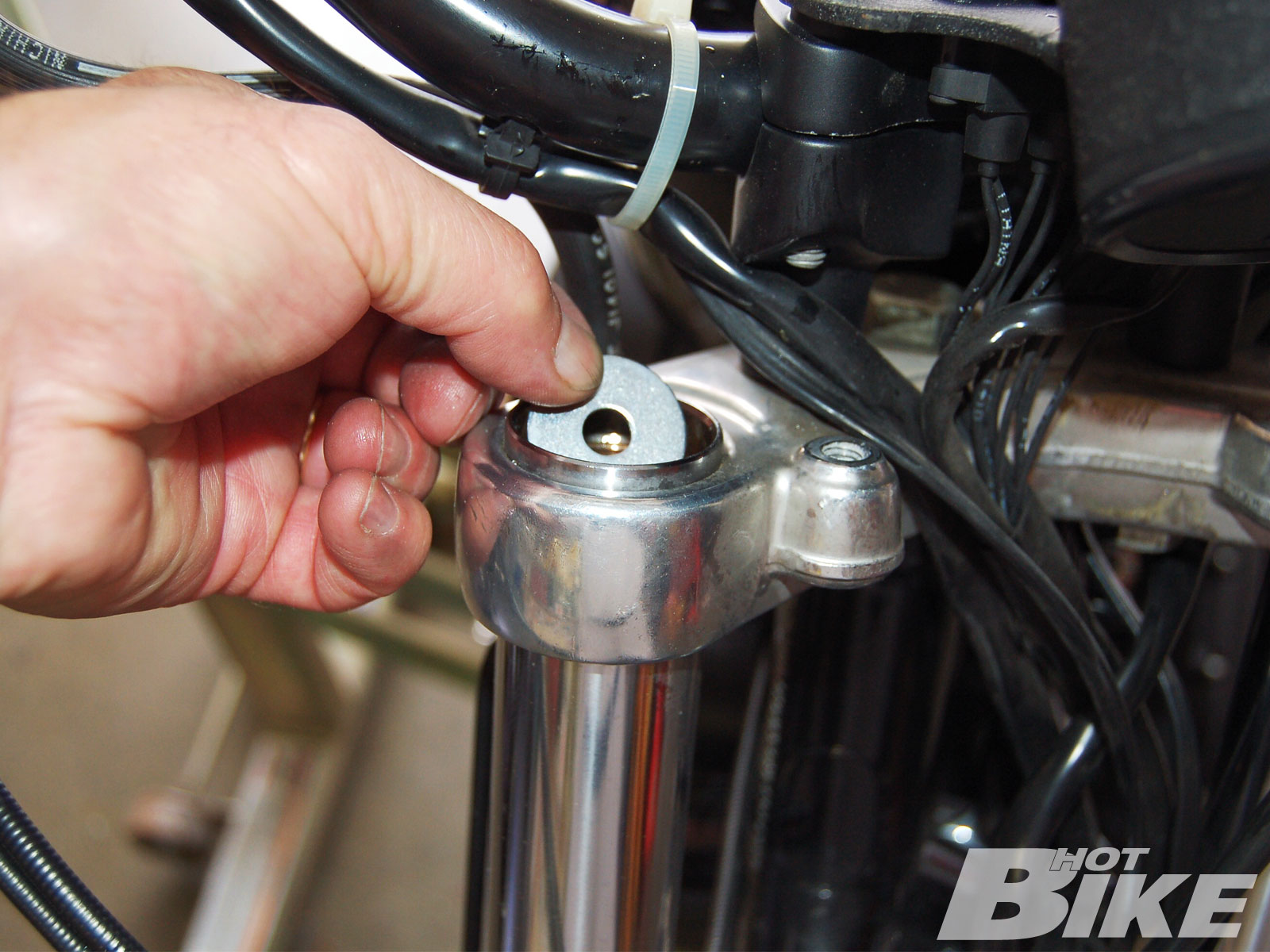 05. This spacer washer was placed between the spacer and the fork cap. 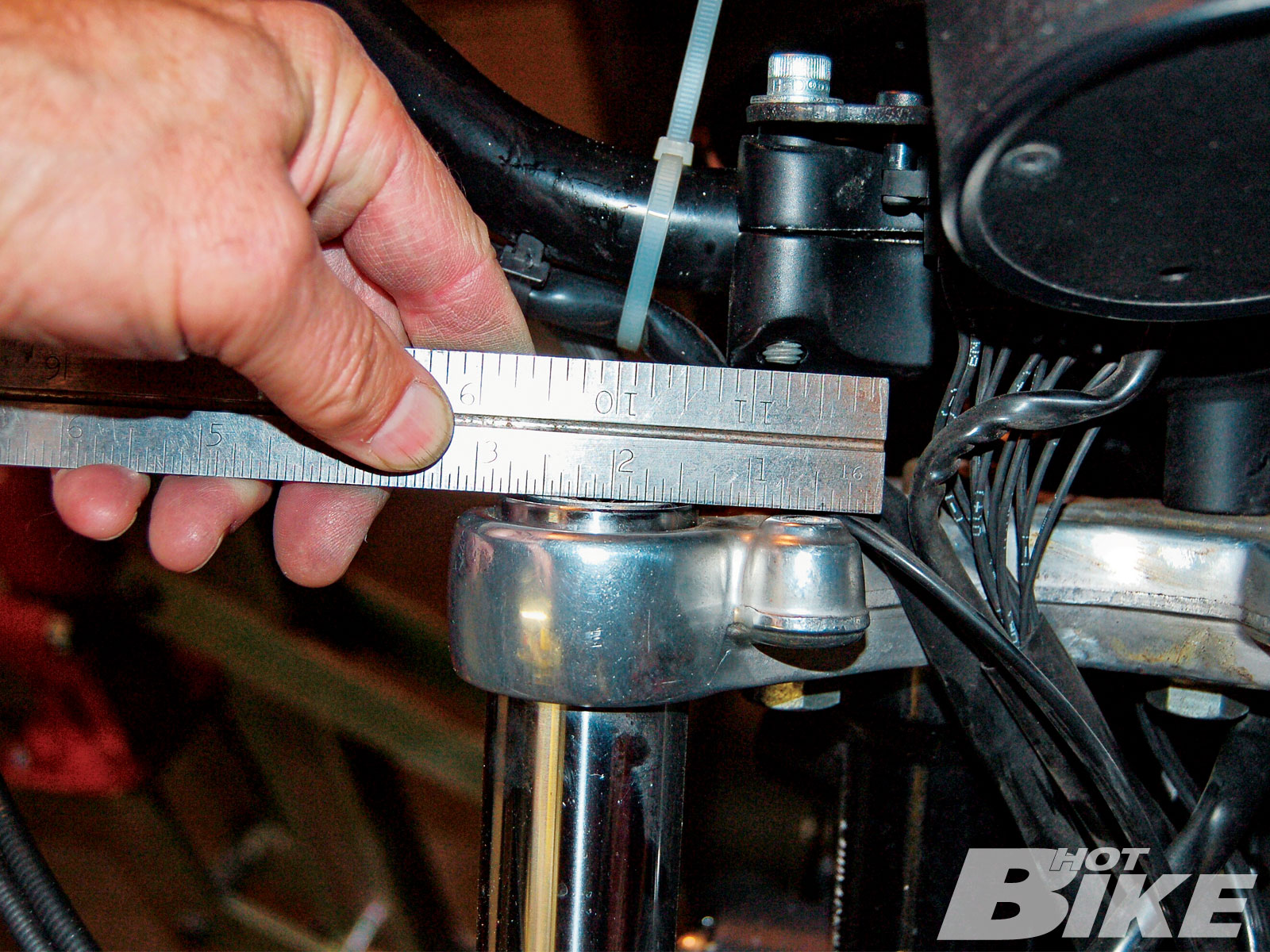 06. A straight edge was used to check that the spacer was flush or below the top of the fork tube then the cap was tightened down. 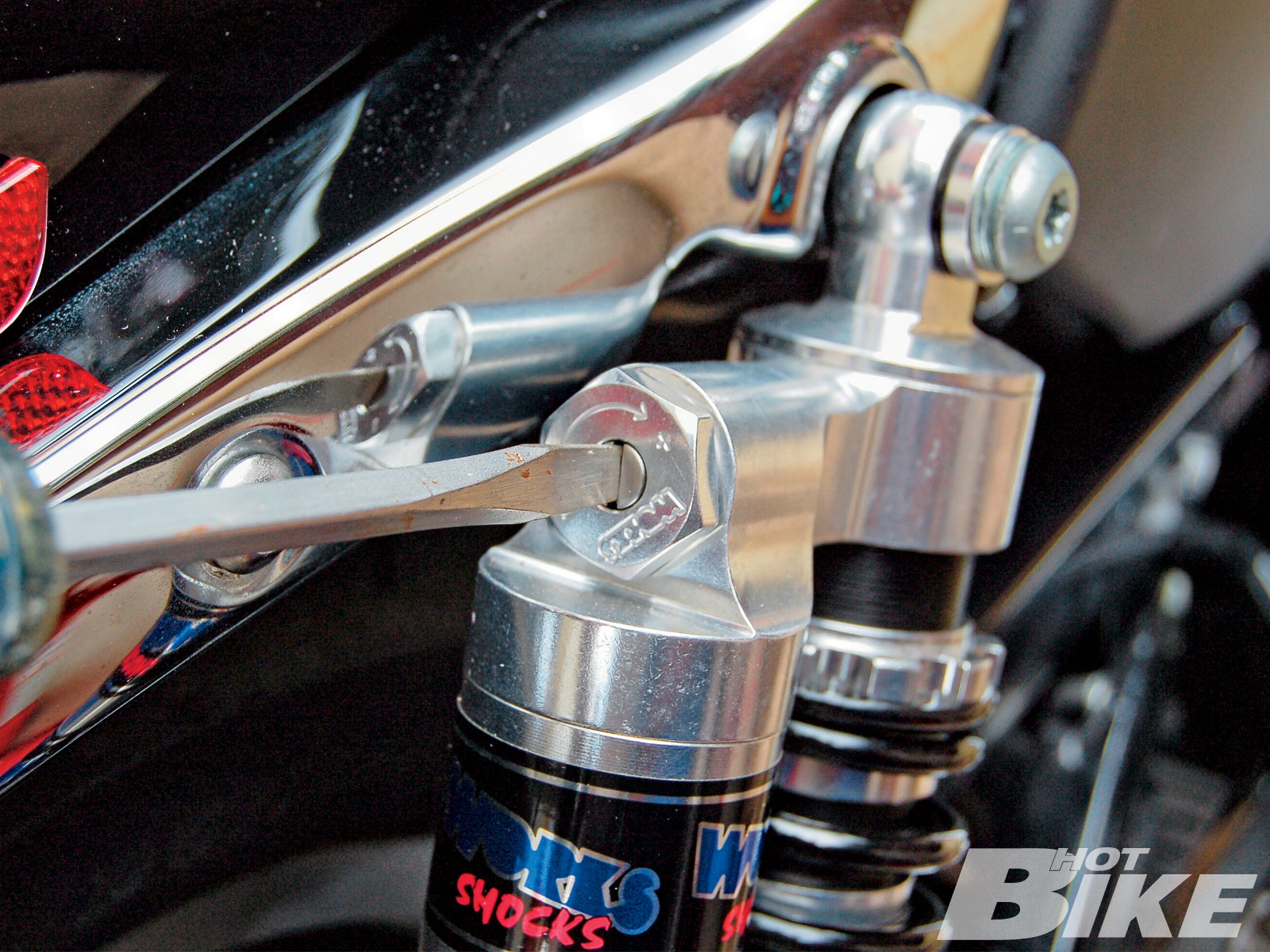 07. The Works Performance Pro Piggyback shocks are easy to adjust. A flat-blade screwdriver was used to adjust rebound damping. 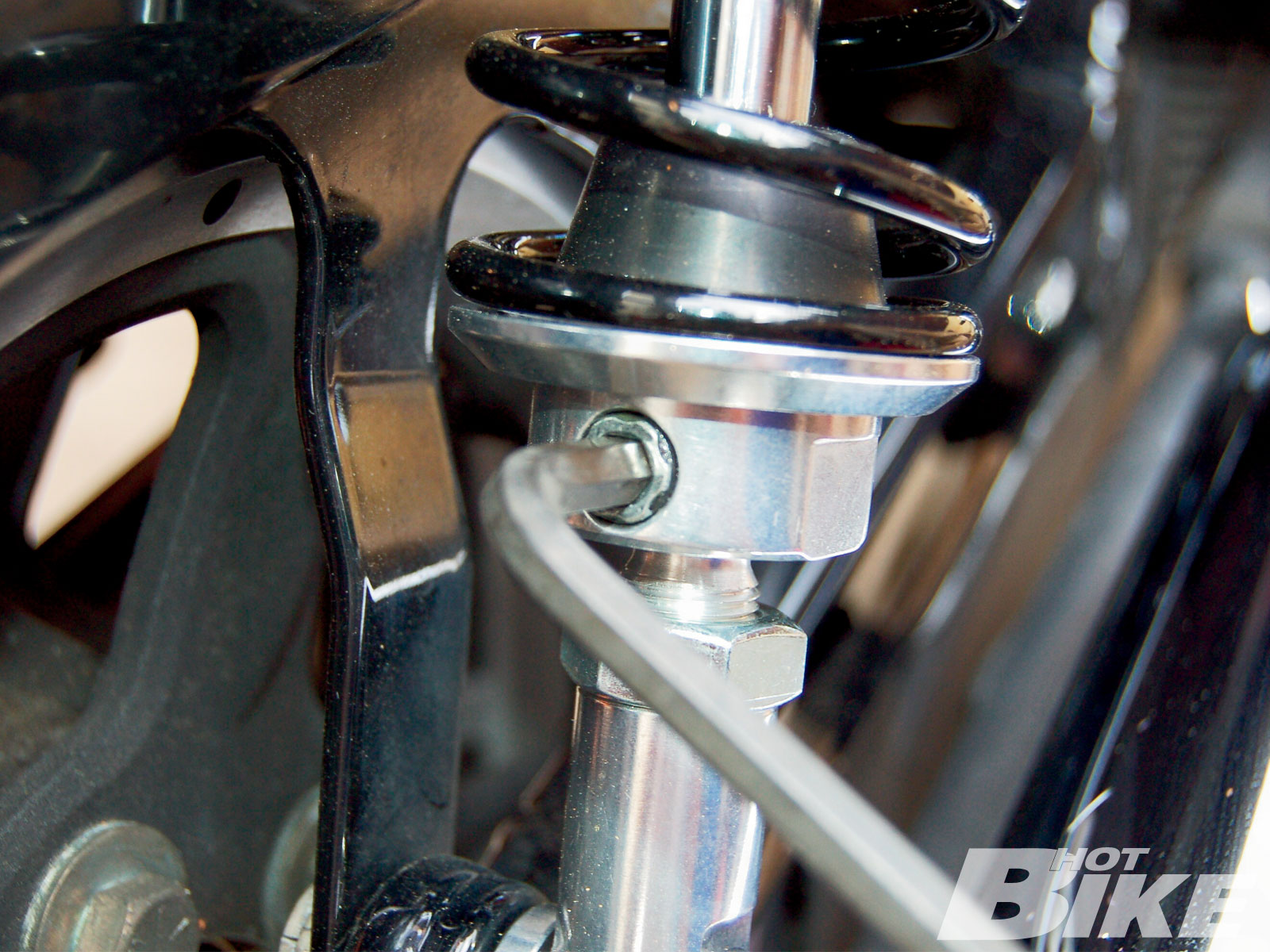 08. An Allen head wrench turns the compression damping knobs that are located at the base of the shock body.

09. The threaded preload collar allows for precise spring preload setting. It’s important to make sure both springs have identical settings.

10. To have more cornering ground clearance the XLRCR’s Pro Piggybacks are half an inch longer than stock.

12. Tommy welded the seams on the frames then welded four threaded studs to the backside so the vents could be mounted to the side covers.

13. We double-checked the length of the vent’s studs to make sure they cleared the oil tank on the right side.

14. The side cover is ready for paint. The original finish was flat black; I used Eastwood Company’s gloss black to match the bike. After the covers were painted, the vents were secured to the side covers with four ny-loc nuts.

15. Here’s a glimpse of what the XLRCR is going to look like. The guys at Rock & Roll Custom Paintworks rocked with this paintjob. We’ll show you the café racer seat and a few other features next issue.

Through the years Willie G. Davidson has penned some provocative models for Harley-Davidson. The ’71 FX Super Glide, ’77 FXS Low Rider, and ’80 FXB Sturgis are landmarks, but among my favorites is the XLCR of 1977-78 vintage. Sadly, the XLCR was a sales flop both years it was on the market, even though café racers were in vogue at the time.

I was hoping that the Motor Company would celebrate the Sportster’s 50th anniversary in 2007 with a tribute XLCR, but that wasn’t to be. And thus began my notion to build my own tribute Harley café racer, a bike I dubbed XLRCR, the middle R giving a nod to the bike’s retro status.

Actually, the idea to build the XLRCR had percolated inside my gray matter for many years. The idea began its slow brew in 1977 when I was the editor of HOT BIKE and we road tested the first XLCR for our December 1977 issue. About that cover bike we stated: “The bike is not a nimble café racer. No, it still favors some of its Harley blood, and cannot be thrown into a corner.” The report also gave demerits to the XLCR’s wobbly suspension and slippery Goodyear tires. A proper XLCR, I concluded at the time, deserved proper suspension and tires.

So a couple years ago when my friend Junior at Lifestyle Cycles in Anaheim, California, said he had a used ’06 XL883R for sale, I bought it figuring that it made the perfect platform for me to resurrect the spirit of the XLCR. The 883R’s wrinkle-black engine cases and cast aluminum wheels are reminiscent of those on Willie G.’s design, making it the perfect donor bike. To expedite the project after Randy Morton’s whiz-bang painters at Rock & Roll Custom Paintworks in Orange, California, applied an eye-catching black-with-checkered-flag paintjob, Mike Weber and the crew at Lifestyle’s service department performed the sheetmetal parts swap, but only after I installed and tuned the suspension.

I went with Patriot Suspension for its innovative dual-spring Genesis fork springs to beef up the frontend. And for the XLRCR’s backside, I chose Works Performance’s (WP) Pro Piggyback Adjustable shocks. These shocks have remote reservoirs for adjustable damping rates (compression and rebound), and threaded collars to set spring preload precisely.

If you special-order the shocks, WP can tailor the spring rates to your weight. Before you make any further adjustments, though, record the settings as applied by WP. Check to see how many clicks from full soft (there are about 15 compression and rebound damping clicks) were given to the shocks’ damping settings by the factory. Do the same for the shock preload, measuring the distance from the threaded preload collar to the reservoir body. That way, should you change settings, you can always return to “ground zero” as recommended by WP.

Proper suspension without good (read: sticky) tires is about as welcome as warm beer on a hot day. And so to help XLRCR chill out through the turns, I wrapped the wheels with Avon Venom tires (100/90-19 front, 150/80-16 rear), but I did so only after Mag Masters polished the cast aluminum hoops’ machined surfaces. XLRCR wasn’t going to be the most colorful bike on the road, so I decided a little spit and shine here and there would visually liven things up.

Next issue we’ll show you some of the other modifications, including the Harley parts that we incorporated into the project, and the cool custom-made café racer seat from Saddlemen.

MEDINA, MN (July 15, 2010) – Victory Motorcycles is proud to return as an official sponsor of the Legendary Buffalo […]