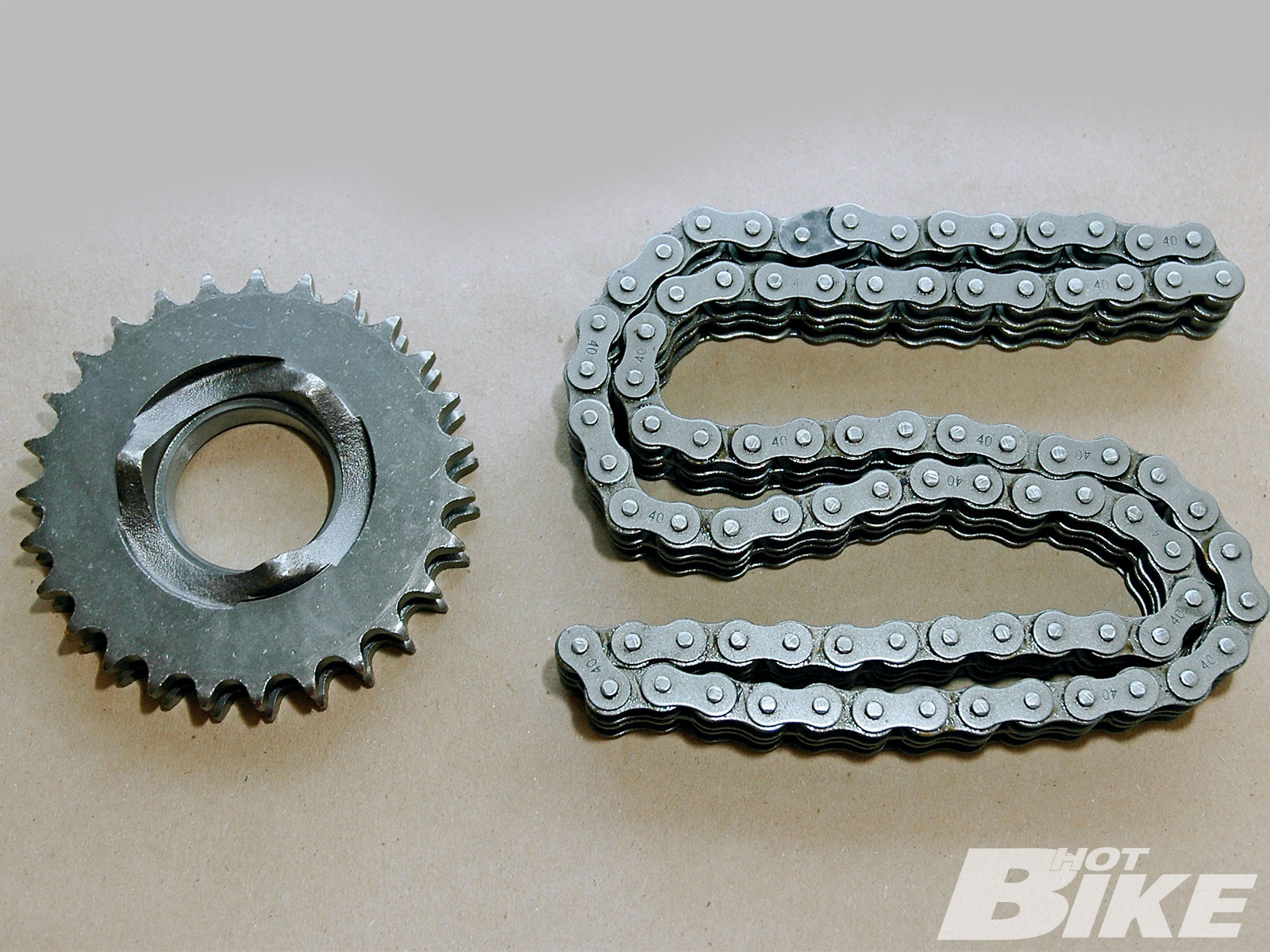 03. To begin, Steven put his bike on the lift and disconnected the negative battery cable, then drained the primary, then removed the primary cover. 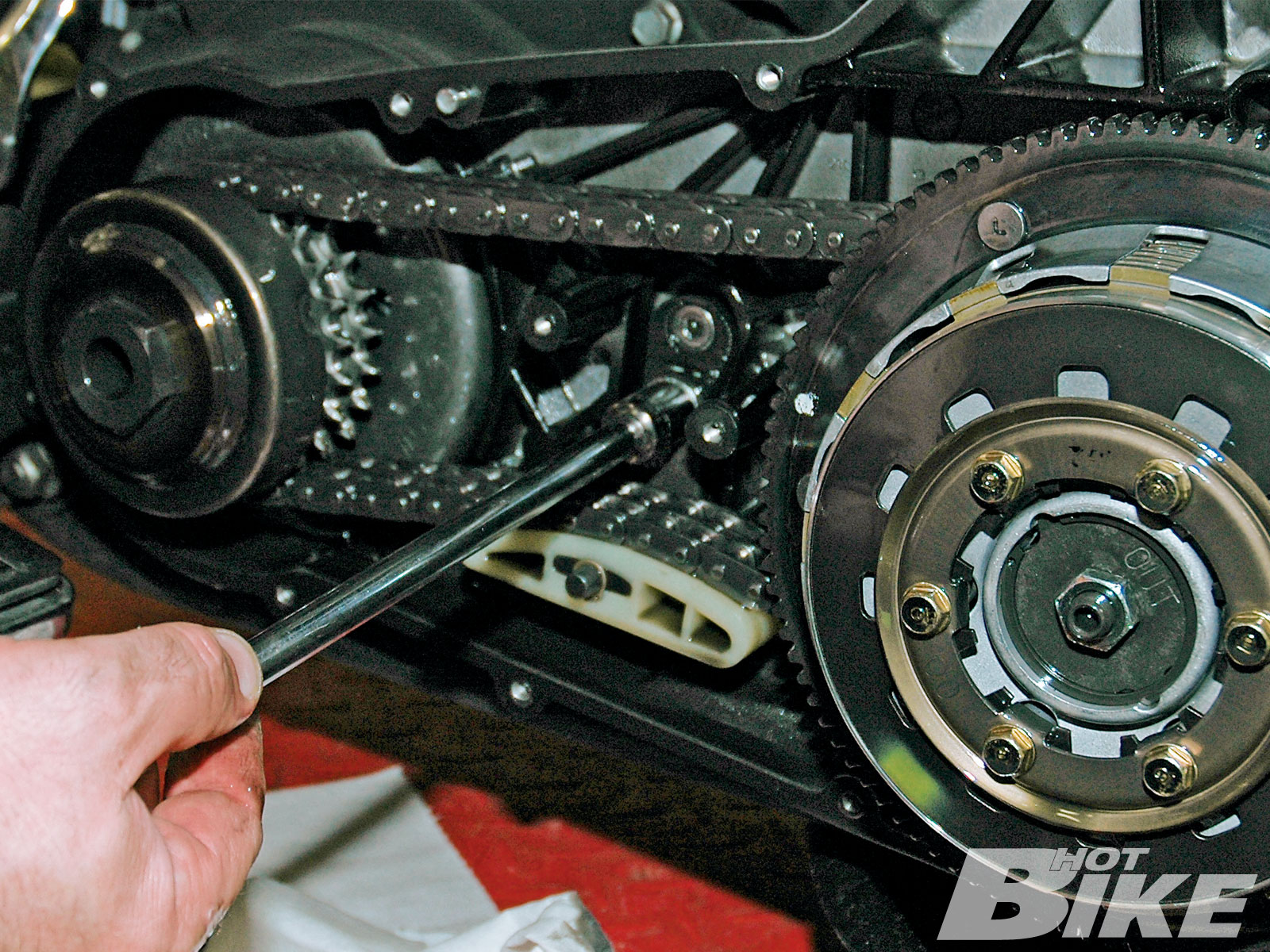 04. Steve loosened the top center nut from the chain tensioner, then pulled the tensioner shoe outward and slid it to the bottom of the primary case. 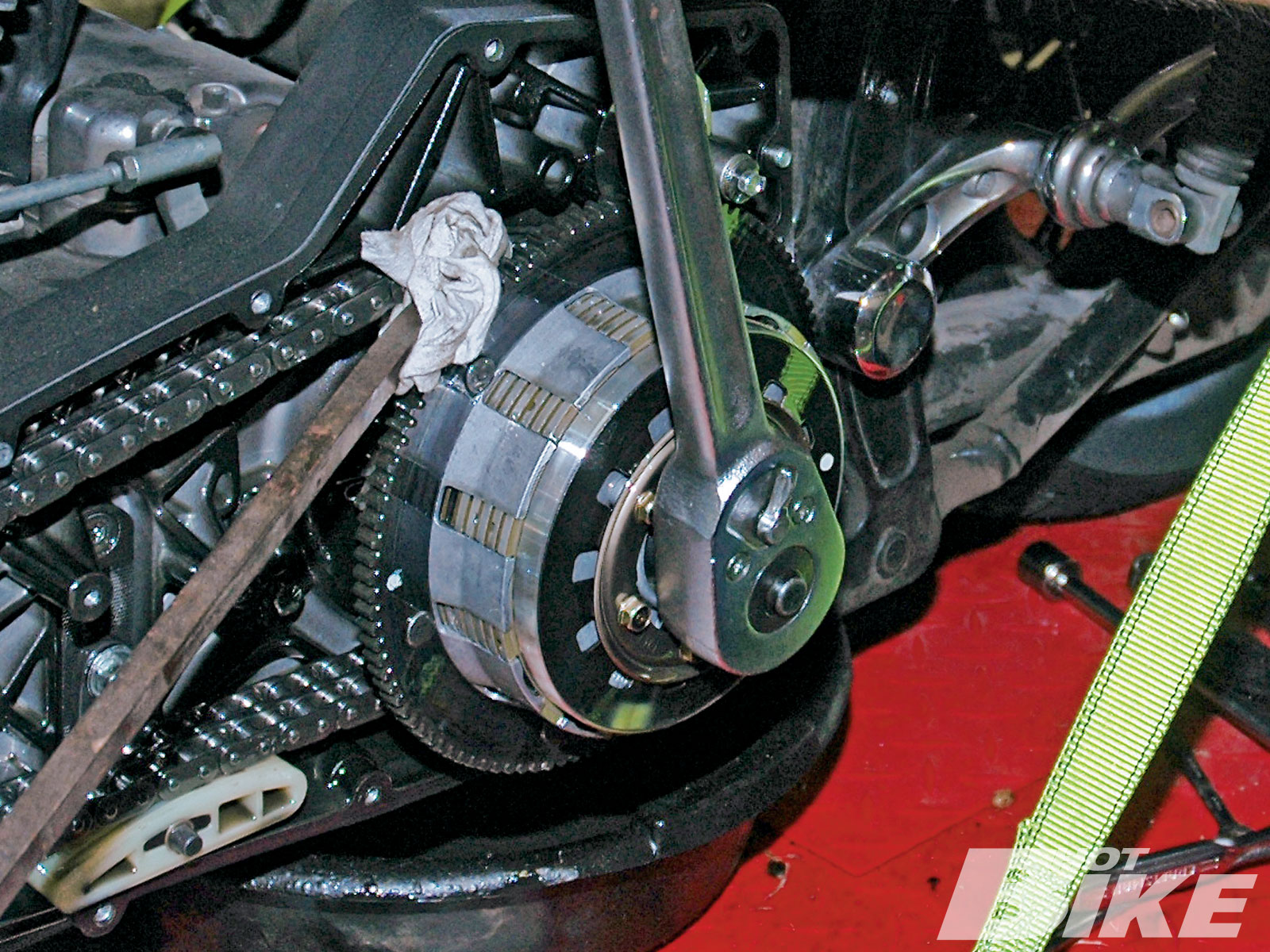 06. To keep the clutch hub from rotating, Steven wedged a large screwdriver and shop towel into the upper strand of the primary chain (or visit georges-garage.com for a host of tools). The clutch hub mainshaft nut has left-handed threads, so Steven used a 1 3/16-inch socket and large socket handle to turn the nut clockwise to remove. 08. He then removed the nut, cover, and sliding cam as a single assembly from the drive shaft. 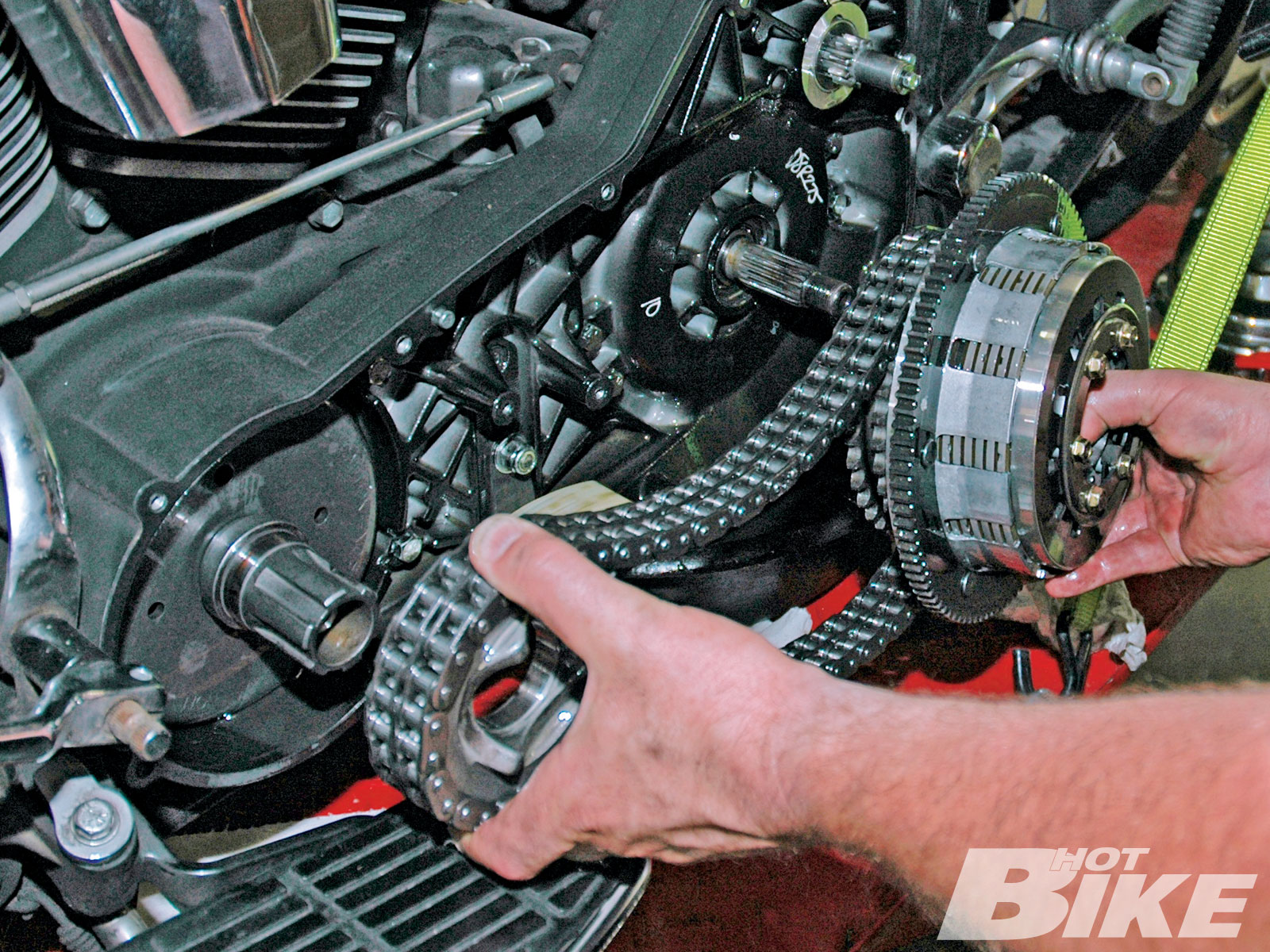 09. The compensating sprocket, primary chain, and clutch hub were then removed.

11. With all the parts removed, Steven cleaned all the gasket surfaces and inspected the shafts and chain tensioner for wear. Using the Illusion sprocket and chain and stock clutch hub, he slid the assembly back into position.

12. He then added a couple of drops of red thread locker to the sprocket nut and torqued it to 150 lb-ft. This time the screwdriver and rag were wedged into the lower strand of the sprocket.

13. Moving to the clutch hub, Steven applied red thread locker and torqued the mainshaft nut to 75 lb-ft. He then replaced the release plate, retaining ring, and jam nut. The word “OUT” stamped on the release plate should face outward.

14. Steven adjusted the cold primary chain to 5/8 inch deflection on the top and tightened the tensioner nut.

15. Next, Steven installed the primary gasket on the two outside pins (one shown by red arrow) and applied the two inspection bolt gaskets to the standoffs inside the primary (yellow arrows).

16. Steven then installed the primary cover and tightened all the outer bolts according to spec, and then added the required amount of H-D SNY3 synthetic lubricant followed by the inspection cover and clutch cover.

Under Budget
Some of our riding buddies complain that their five-speed transmissions require high-motor rpms to maintain highway speeds more than 65 mph. They also complain that these high rpm’s create excessive, uncomfortable vibration and kills their fuel mileage. They want to know how to reduce engine rpm at cruising speed. Since drive ratios govern the relationship between engine speed and bike speed, one popular cure is to add another gear by installing a six-speed transmission. However, that is an expensive and extensive conversion. Another option is to use a larger transmission pulley or a smaller rear wheel pulley. But these require changing the drivebelt, another nasty job.

To provide a less expensive and easier-to-install solution, Illusion Motorsports offers its 27 Tooth Motor Sprocket Kits. Illusion has three kits: for ’90-06 Softail and Dyna (except ’06 Dyna), for ’94-06 FXR and FLT, FLH, and for ’93 down using a 26-tooth motor sprocket (it’s best to contact Illusion for proper fitment). Each kit contains a 27-tooth (i.e. larger-than-stock 25-tooth) motor/compensating sprocket and a new custom-length primary chain (MSRP $122.09). Changing the compensating sprocket and primary chain only takes a couple hours.

The compensating sprocket is the front sprocket in the primary drive. Installing this larger compensating sprocket will change the primary and final drive ratios and result in higher speed at a given rpm, or conversely, lowers rpm at a given speed. Illusion claims its kit will increase highway speed by about 8 percent . That amounts to about a 5-mph increase in speed or a drop of about 200 rpm for a given cruising speed. To learn more about primary, secondary, and final drive ratios, check out “Drivetrain Basics” in the tech section of hotbikeweb.com.

Illusion sent us its Softail kit because our friend, Steven, wanted to smooth out the highway cruising on his ’05 Softail Heritage Classic. We hustled over to his garage where he did the complete install in less than two hours. Prior to that, Steven made a data run and noted his rpm’s at 50, 60, and 70 mph. After the install, he made the same data run.

Here are the results:

All drive ratio changes are trade-offs and the downside here is a slight reduction in low-end torque. However, Steven reported no noticeable loss on his testrides.

How To Mount Your Phone To Your Ebike

A phone mount can improve your ride with access to maps, camera, and music. Amazon Smartphones are a vital tool […]

01. Here is everything we used for the swap: (A) rotary tool with a flex shaft attachment, (B) large screwdriver, […]

Own an Indian Motorcycle Scout FTR750