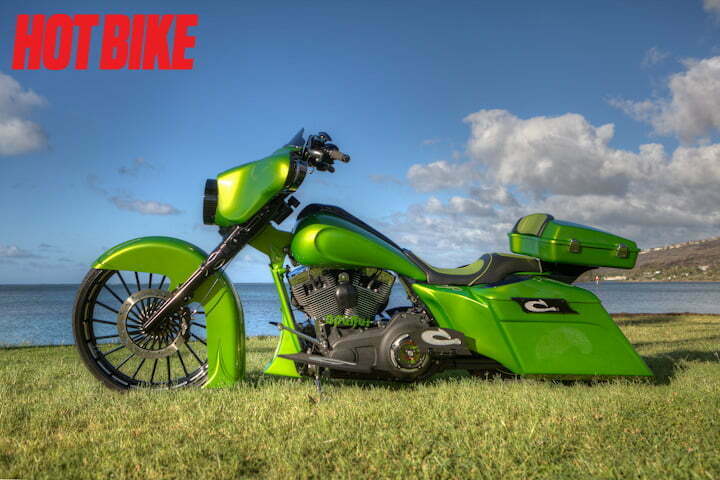 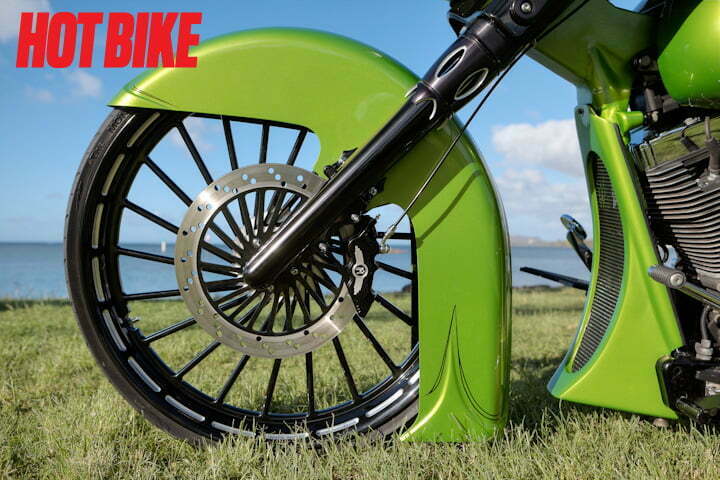 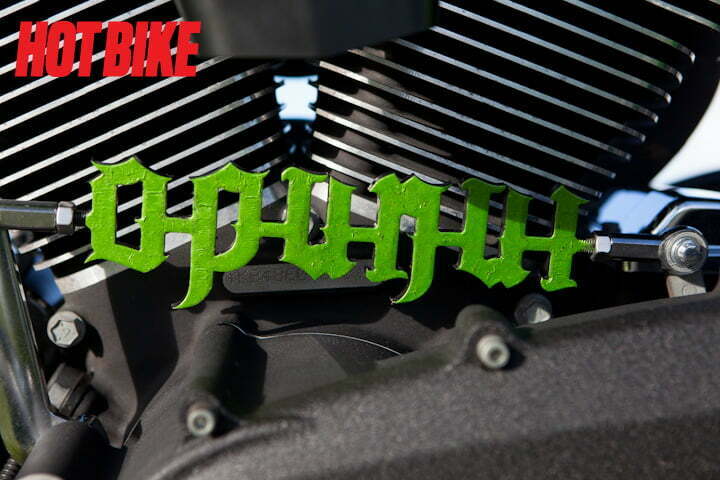 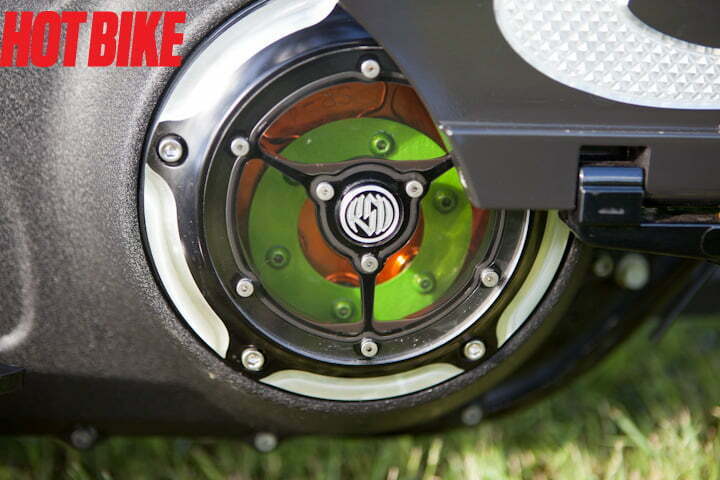 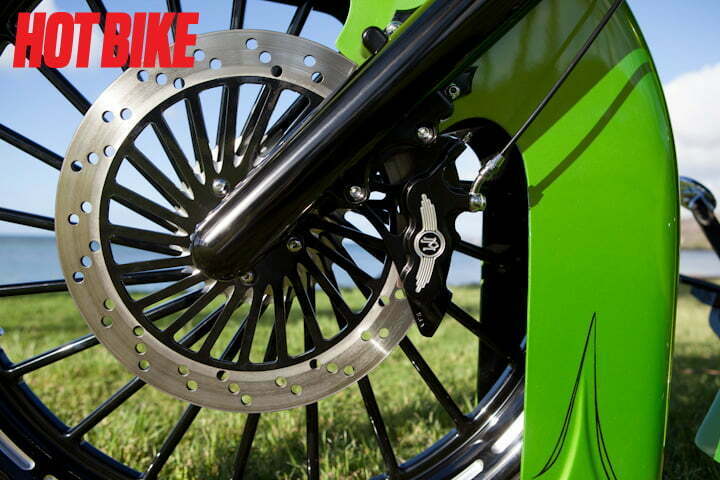 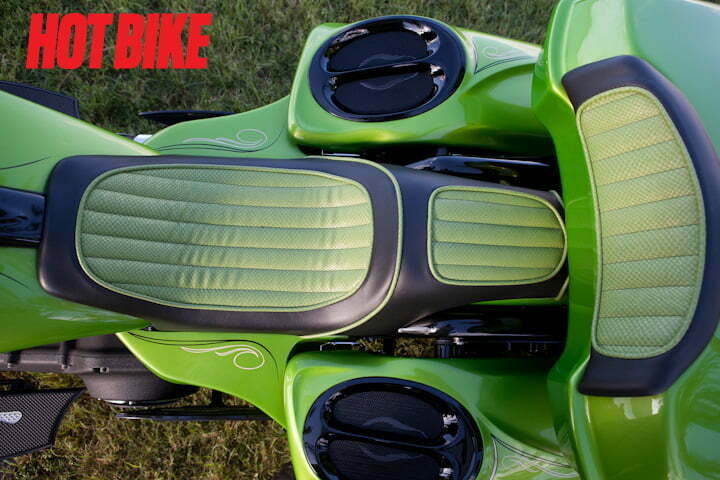 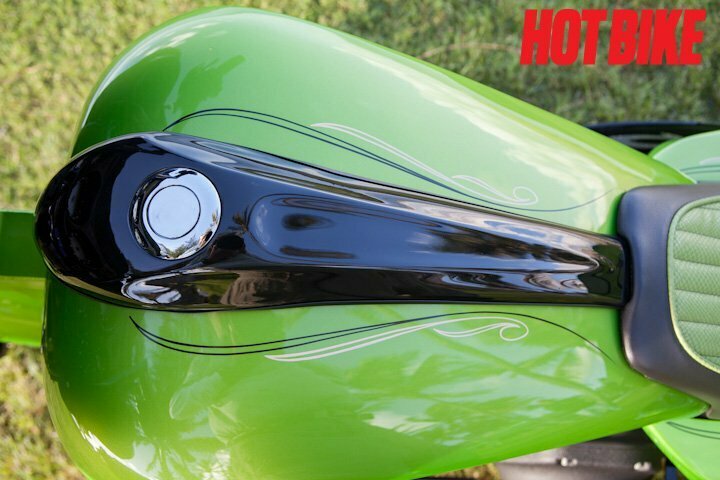 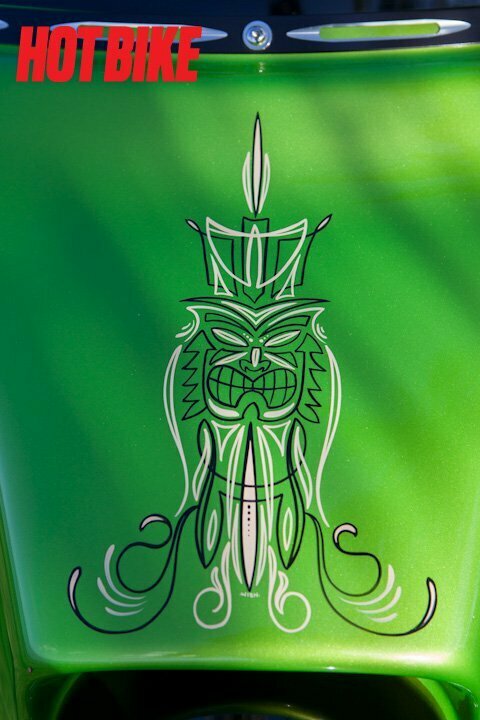 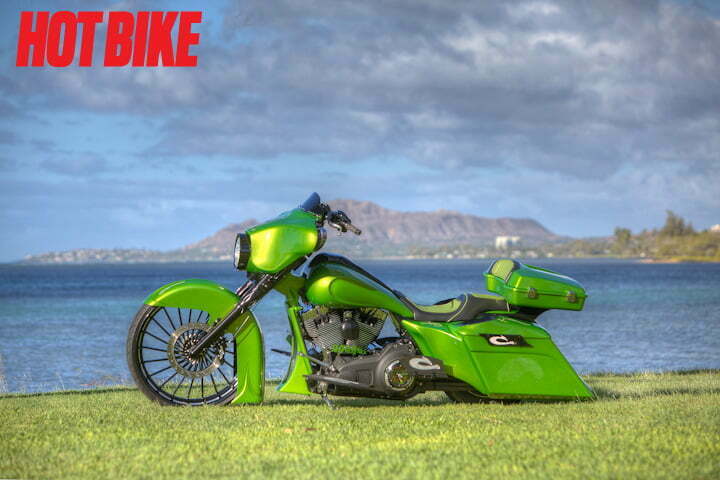 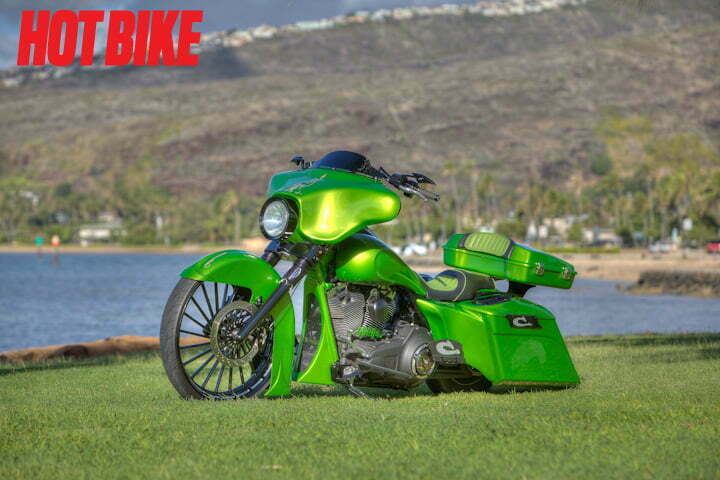 When Bobby Spry first bought this bike it was a new 2008 Street Glide and the idea was to have a daily driver. Bobby had other bikes but they weren’t conducive to traveling back and forth to work every day. This was 4 years ago before baggers became what they are today. However, as time went by he started thinking about doing a custom bagger. Back then no one was building custom baggers in the Islands. Even his friends just told him “Bobby, we don’t do that kind of stuff.” So he thought “OK, I’m going to be the first.”

Bobby was raised in Hawaii and is also an avid fisherman- so he wanted to have a Hawaiian theme. That’s were the fishhooks and the “Opa Nui” comes in. “Opu Nui” means “big belly” in Hawaiian

and the name comes from his fishing boat. That’s also why there’s ghost koi on the saddlebags and other spots on the bike. There are “Olukai” fishhooks on the floorboards. To the ancient Hawaiians the bone fishhook represented strength, prosperity, abundance, and a great respect for the sea.

He started ordering parts to fit that theme but he didn’t like the way they looked when they arrived. The more parts that came in the worse they seemed. He just hated them; “They just didn’t fit what I had in mind for the bike, so I ended up modifying almost all of them.” He stretched the bags, molded the side covers, cut the rear fender in half, and changed almost everything that he ordered. He wanted a 52-degree angle on the bags and rear fender so he had to modify the entire back end. By the way, all this is happening in his garage.

He boxed the frame and raked it out – it’s 44 degrees from the stock 26. The chin spoiler is from Camtech Baggers in South Carolina originally but he didn’t like the lines so he modified that. Tracy Wilkerson from Tracecave Customs in Alabama made the floorboards and bag latches. He also came up with the Olukai fishhook design that came out cherry; it’s one of a kind.

Bobby put overlays on the tank and dash. He installed a custom stereo, hid all the wiring in the frame rails, made the chin spoiler, customized a Sinister fender with a Sinister 26 in front wheel. It has Arlen Ness lower legs, Eddie Trotta cowbells with hidden Trotta signal lights. The front fairing is stock with a raked bucket from Headwinds to keep the light at the same elevation.

Chad Morisato from A Touch of Air applied the paint and Dennis & Mad Mike at Cosmic Airbrush pin striped it. The color is “2008 Dodge Viper Snakeskin Pearl”.

Bobby always thought he would love to have a Dodge Viper but he knew he couldn’t afford one. However, he definitely could afford the $300 in Dodge Viper paint, and that’s how the color came about.

The pipes are Paul Yaffe; Bobby got them from Kendall Johnson in South Carolina. Kendall tested the pipes on a dyno machine and told Bobby they were great pipes so he got a set of first-class used pipes for an excellent price.

The Air cleaner, grips, and derby cover are all from Roland Sands. Bobby added the PM mirrors and PM hydraulic clutch. He got the cut down tour pack from a guy in Pennsylvania. The mold and the quality were pretty good so he used that as his pizza box. Benji from Legacy Baggers made the custom speaker grills and Guys Upholstery in Arizona did the seat.

Bobby holds an engineering degree so his day job is an engineer. He has always tinkered since he had a mini bike with the old sting-ray banana seat back in the late 60’s early 70’s. He would cut the forks and shove the front end out with the matching banana seat, and don’t forget the baseball cards and cloths pins on the spokes for the sound effects.

Most of the fabrication Bobby does is in his shop in the garage. He doesn’t need to send anything out; he does all his own machine work. Bobby says part of building a custom bike is adapting and modifying the parts, “You can’t get frustrated with parts that don’t fit or look right.” He just took his time – it took five months to build it.

The air ride system is off a 1964 Corvette.He also designed a new air system for the front that he’s waiting for the patent and liability insurance on. He will be putting that on and also will be producing and selling them as custom front air rides. He has already lined up a manufacturer and has about 250 on order. The first 25 are coming to Hawaii and he will be installing them on friends’ bikes. Bobby says the quality is top of the line and the ride is unreal.

Of course he gets compliments everywhere he goes. Bobby loves riding the bike, and if the weather cooperates he’s always on it. But he says he doesn’t ride it in the rain because it’s such a bitch to clean – so much for that daily rider idea.

It rubs the polish on the Brough or else it gets the hose again. Courtesy of Jay Leno’s Garage Jay […]

Speed’s Spotlight: Sealed Power Photo: Joe Kress When you want that little bit of extra power, performance, and peace of […]

Paughco is now offering a complete selection of direct fit and custom, superior quality 80-spoke rim assemblies for a wide […]

5 Multi-Tools And Kits For Your Next Roadside Repair