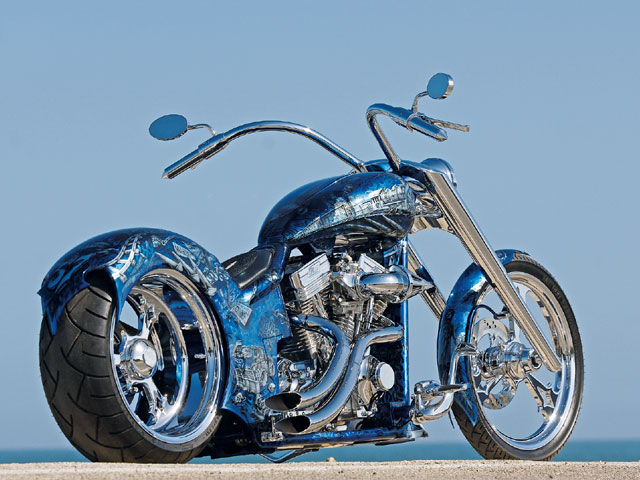 This bike, named “Krime of Passion,” came to life during a meeting amongst friends at a local watering hole. After owner Bill Frank tried unsuccessfully to buy a famous TV builder’s bike, he turned to his friend Dave Aulita for some helpful advice. Dave’s an ex-New Yorker who relocated to sunny Sarasota, FL, to open his own custom shop, Xtreme Cycles of Sarasota. Xtreme’s been set up as a do-it-all V-Twin shop, providing services from tune-ups and parts to one-off ground-up customs.

During early discussions, Bill and Dave brainstormed ideas for the custom project. As the concepts and ideas came together, Bill decided to place no limits on what Dave and his crew could do-a blank check, so to speak. After another trip to the Beer Church, one of Bill’s friends suggested that the bike’s paint should tell Bill’s life story. Apparently, Bill has led quite the interesting life, and the stories consumed much of the night. We’re not at liberty to discuss all of the details contained in the paintwork, so you’ll have to ask Bill the next time he’s out cruising the big, bad, blue bike.

Once some of the preliminary details of the build were worked out, Dave ordered an RC Components single-sided swingarm frame that was stretched 2 inches up in the downtubes and 2 inches out in the backbone. Dave formed the downtubes and created a “cow catcher” at the bottom that conceals all of the bike’s electronics. Not seen until actuated are hidden turn signals that are concealed within the chin spoiler. The 40-degree raked neck combined with a sleek Roger Goldammer frontend was the perfect candidate to show off the RC Warlock billet wheels. On the rear, the wheel and the 240 Metzeler skin really shine in all their glory with a clean right side, thanks to a swingarm that attaches only on the left side of the frame. Keeping the right side even more clean was the addition of a combination brake rotor/belt pulley on the left side. A chromed four-piston Hawg Halters caliper clamps the unit. Up front, the brake line was hidden in the forks by carefully drilling a passageway connecting the master cylinder and the caliper. All was going well until a fire in Dave’s shop slowed down the production of Bill’s dream sled.

That event added time to the Krime of Passion build, but Dave and Bill were undeterred by the setback. While the smoke cleared, Dave put in a call to TP Engineering to get his hands on a fire-breathing 121ci Evo motor. Packed inside the cases are TP’s own flywheels and rods that spin big-bore pistons inside the polished cylinders. Sitting atop the cylinders are TP heads joined together through a Mikuni carburetor, which breathes through an Xtreme air cleaner. Showing off the motor as well as emptying the heads of combustion byproducts is a set of Martin Bros. pipes. They look good by themselves, but they really highlight the beautiful mill as the front pipe passes over the cam chest before paralleling the rear pipe. All of that power is transferred to the Baker six-speed transmission via a 3-inch BDL open-belt primary. This primary comes complete with outer bearing support as well as containing the oil filter, keeping it out of sight. A belt secondary drive links the tranny output to the rear pulley.

Dave went all out when it was time for the sheetmetal. The gas tank was created to flow smoothly and not detract from the sleek lines of the bike. Aside from holding the gas, it also serves to hide all of the bike’s plumbing and wires that pass beneath it. A close-fitting front fender hugs the 21-inch Metzeler rubber, attaching to the forks through hand-formed bar stock. For added style, Dave cut out sections of the front and rear fenders. Extensive metalwork and molding flow the rear fender into the seat-pan area, along with side covers on either side of the bike that extend almost to the ground. This was done both for aesthetics as well as to conceal the oil tank. To make servicing the bike easier, specially created access panels were incorporated into the side covers. What you see here is the result of many different iterations of sheetmetal, arising out of what looked best to Bill and Dave.

Before the skins were covered, Bill wanted to take a trip from his home in Pennsylvania to Florida to make sure no further changes were needed. In preparation for the maiden voyage, Dave added the necessary parts to get the bike out on the road. A clean set of Climax Cycle controls was added above the top triple-tree, seeming to flow perfectly with the frontend. These slick handlebars come with hand controls with internal reservoirs and internally wired microswitches for an ultra-clean look. Flanking the bars are Maximum Products mirrors with digital gauges built into the glass. Foot-control duties were left to Eurocomponents, with the brake side having a built-in master cylinder. Hitech handled the brakelight, taillight, headlight, and license-plate bracket duties, while a stingray seat by Hoyts rounded out the accessory package. Bill was very happy with how the bike looked and ran-leaving only the paint for the bike to be finished.

Dave and the Xtreme crew disassembled the bike in order to have the frame and sheetmetal molded and painted. It turned out that Bill had met a painter, Matt Willoughby, who lived close by and who could handle the intricate work that Bill demanded. The Chrysler building in New York City, where Bill used to work, was the first item painted on the tank. After six months of painstaking painting that added elements of Bill’s life, the sheetmetal was sent back to Florida so the bike could be completed. Once reassembled, the bike was ready for Bill to pick up during the famed Daytona Bike Week. That was just the start of the bond between Bill and the Krime of Passion, as he regularly rides the bike. He can be seen rolling along the roads of Pennsylvania and proudly displaying this one-off Xtreme Cycles machine.

MILWAUKEE (April 1, 2012) As part of its “Upgrade Your Ride” Spring promotion, Harley-Davidson® is introducing a new Seat and […]