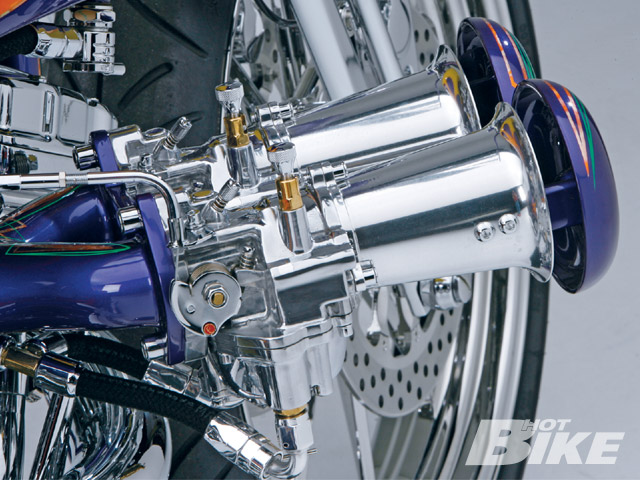 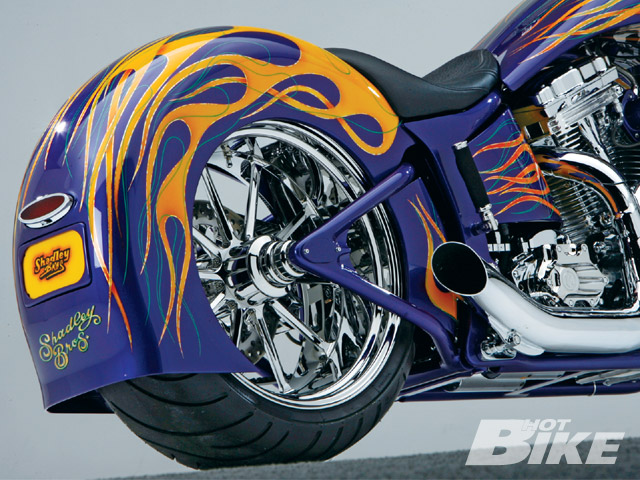 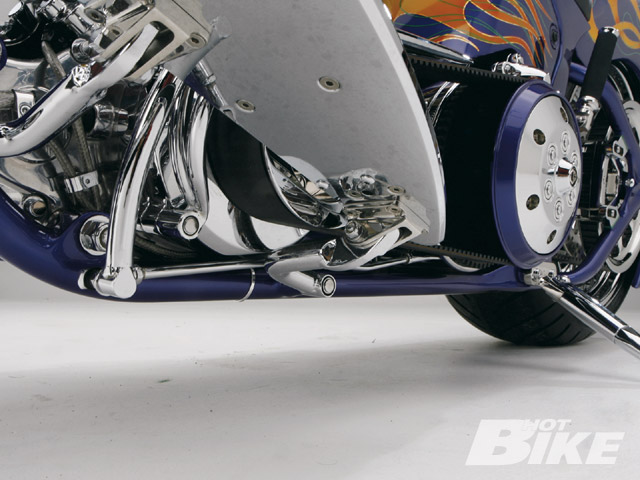 Paul and Mark made their own foot controls which allowed them to run the s,hift linkage under the left side floorboard for a cleaner look. 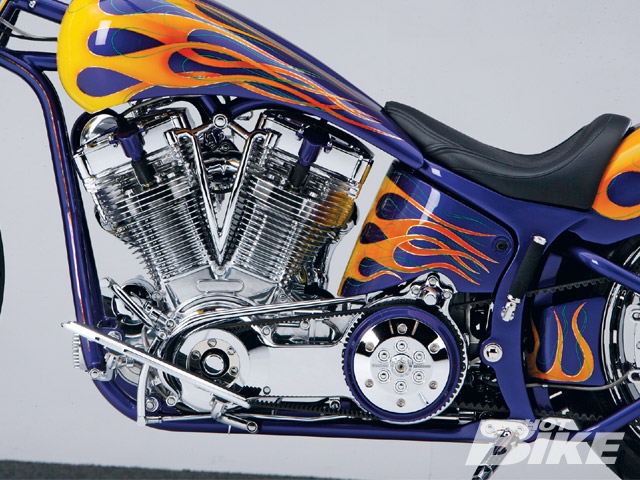 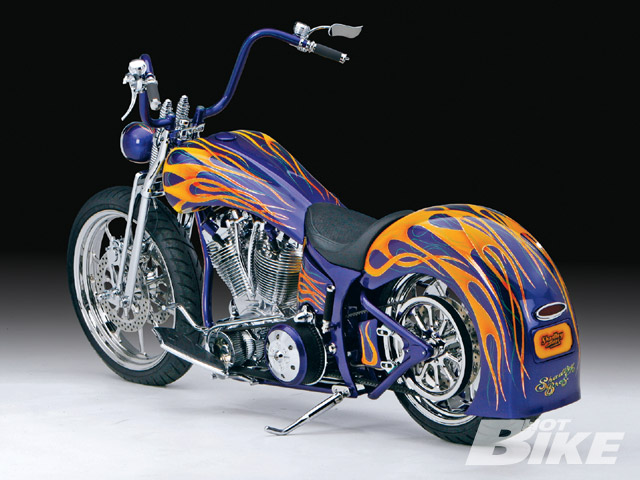 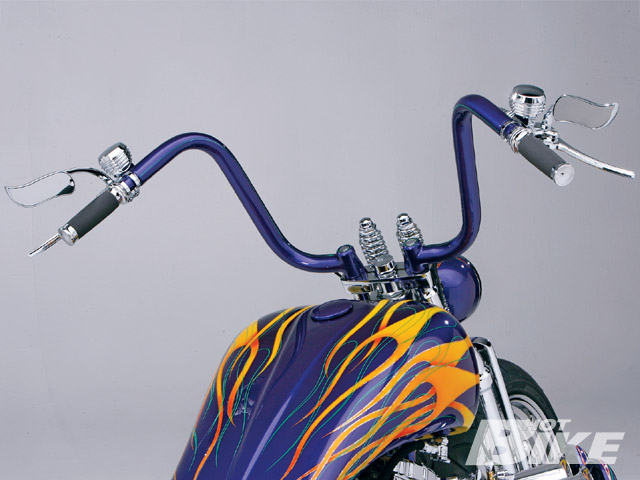 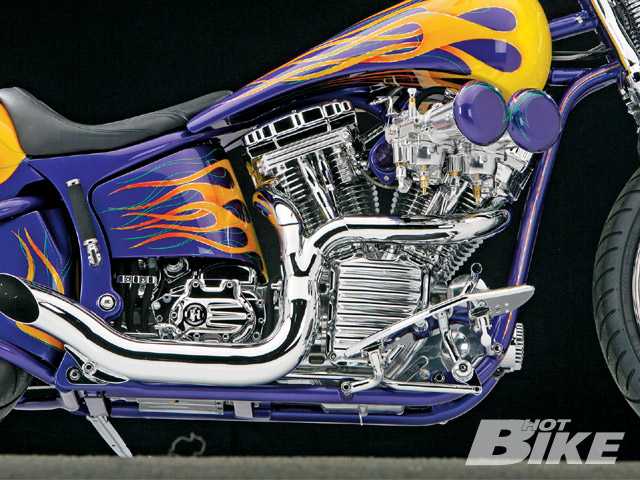 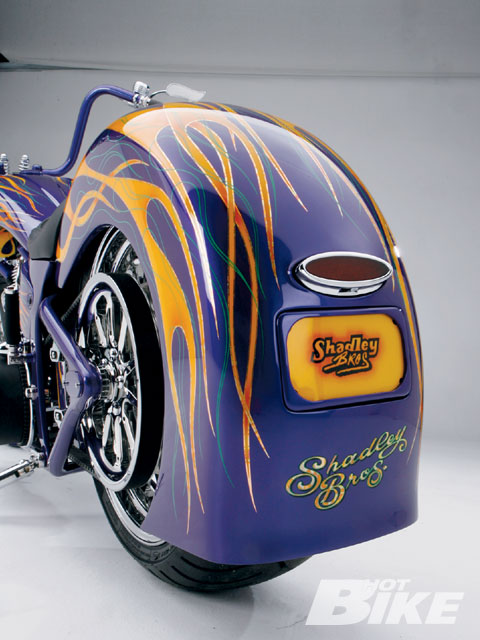 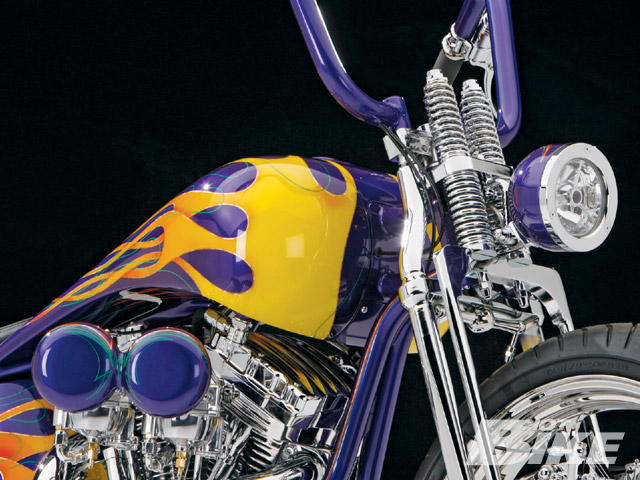 Offsetting purple with yellow is Design 101, but it takes skill to shape flames and stripe gold leaf. John Hartnett did the former, and Gregg Hegar took care of the latter.

Taking in a stray is usually pretty straightforward; some food, a litter box, and/or an intervention before you turn it back over to its parents, and you’re good to go. In Paul Shadley’s case, though, it was a little more complex. Paul and his brother Mark took in an abused Harley and turned its life around.

Paul and Mark co-own Shadley Bros in Hanson, Massachusetts. They had just sold a long chopper and were hungry to make something more rider-friendly. At the same time, though, they wanted to avoid all the EPA regulation that comes with scratch-built iron. That’s what sent them to the local bank, where they found a beat-down 2001 Fat Boy. Some merciful repo man rescued it from the previous owner and it just needed a home.

The Shadleys took the Fat Boy into the family, re-raising it as their own; well, mostly Paul’s. Stock Harley frames are made for neutral ergonomics; the Fatty gave Paul instant comfort (versus the chopper they’d just sold). That said, Paul also wanted something that would catch eyes a decade down the road. Neutral rider position? Sure. Stock everything else? Not so much. The Shadley Bros were pretty busy when we called, so we conked Paul on the head, duct taped him to a chair, and asked him about his bike.

Hot Bike: What happened after you stripped down the bike?

Paul Shadley: We started by making a wishbone front section and de-raking the frame. We also lowered the neck 1-inch and stretched it 2 more inches.

HB: And out back?

HB: You shaved the frame, but what about the Springer forks?

PS: It’s a 2-inch-under DNA Springer, with a headlight mount we fabricated.

**HB: **That’s a good start to a snub-nosed bike, but what about the stretched gas tank. What’s the deal?

PS: The gas tank started out as a fuel-injected Fat Boy tank. We cut the bottom out, stretched the top and sides, and made a weld-in dash. We also flattened out the bottom for a smooth look. We hid all the mounts and made a lower panel to close off the frame tube.

HB: The back fender looks clean, too. Tell us about that.

PS: It was a Ness 11.5-inch steel Tail Dragger. We reworked the inside of the fender by adding steel plates for strength. Because it’s so long, we didn’t want it to break. We also made a set of internal fender struts for a clean look on the outside. The taillamp is an Alloy Art side plate assembly. We cut the plate bracket off and fit it into the rear fender. The plate bracket was frenched into the bottom of the fender.

HB: Sounds like you really went to town sanitizing the metalwork.

PS: Yes. The oil tank was lengthened in the front; the sides were stretched and fitted to the frame. We removed and relocated the oil lines under the tank.

HB: What about the motor?

PS: It was a stock 88 Twin Cam B. Mark pulled it apart, had the engine case polished, and rounded the cylinders and heads. The heads were ported by Jim “The Blade” Dougan at Shadley Bros. Mark assembled it with a 95-inch kit and Wood Bros. Knight Prowler cams. The twin S&S; E carb and intake manifold were built by Mark, too.

HB: Right then, we broke for lunch. By the time we were back, Paul had ridden off on his bike. Note to self: buy better duct tape.

The Legendary Buffalo Chip® Thanks Customers, Past and Present with “30 Years Strong – Sturgis Buffalo Chip”