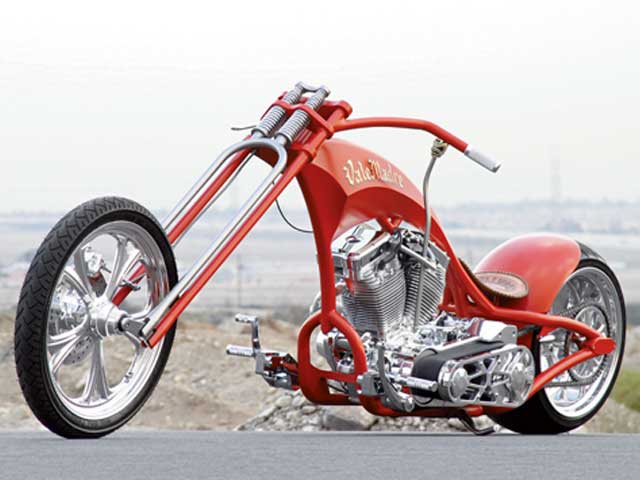 Today’s motorcycle marketplace is certainly a buyer’s dream-choices are everywhere. Open up a phone book, from Juneau to Anywhere, USA, and you’re likely to find numerous listings for chopper shops; bike shops; and shops with references to pigs, hogs, hawgs, and eagles, serving up healthy portions of chrome and steel to feed your steed. All of these places, big and small, are vying for the hard-earned cash of potential, current, and future customers. Some prefer the big corporate dealerships with neon lights, espresso machines, and an army of dutiful employees to cater to your every motorcycle need. You’d hardly notice it’s an actual bike shop if it weren’t for the guy with dirty fingernails sneaking around the back of the clothing department. At the other end of the spectrum are the smaller Mom and Pop shops that cater to the rider who likes to have a more personal involvement with both his motorcycle and the people who work on and build it.

Over the past few years we’ve had the opportunity to see many of the bikes built by a motorcycle shop that’s located away from the big-city lights and television cameras of Los Angeles. Situated in the high desert community of Hesperia, CA, is Trollworx Choppers, owned and operated by the Marino family. The wife-and-husband team of Dorothy and Terry serve as the core that has seen Trollworx grow from a small garage operation to a full custom fab and service shop. Although the Marinos, with sons Bobby and Todd, have built choppers under the Trollworx name since around 1990, early 2002 saw the company move from the Marinos’ garage to its current location. The location might have changed, but the bikes are still built with the same passion and attention to detail as those that were put together in the Marinos’ garage. Todd does all of the painting on Trollworx’s custom choppers, as well as much of the metalwork. He learned how to paint from Terry at an early age and continues to do it for a living. Motorcycle riding and building have been in the Marino family for three generations, and the fourth generation is already gaining interest in it. Terry and Dorothy’s nine-year-old granddaughter, Snobia, works as a part-time receptionist, answering phone calls at Trollworx when she’s not in school. She also rides a dirt bike and wants a mini chopper. As you can see, this really is a family affair.

Even though Trollworx is a small company, the Marinos feel their bikes can compete with those of any other bike builders because they’re built one nut and bolt at a time with an attention to detail that sets them apart from some of the larger bike builders. Each one of the company’s bikes is one of a kind, built with the customer’s input and personality in mind. The Trollworx crew values quality over quantity. With that in mind, the Marinos decided to build a new bike-not for a customer, but for themselves. It all came about as a collaborative effort of the whole family, with each member pitching in ideas and then jumping into the build. As the project progressed, details would be changed depending on what everyone thought looked good. One main goal was keep it simple or, to put it more clearly, simple-looking-no outrageous paint, nothing extraneous.

An early priority to getting the build going was to get a frame for them to work with. After seeing the original Curves-framed bike that the guys at Redneck Engineering built, Terry tried to persuade them to sell him that one. Since the Redneck bike was already fully built, the Trollworx crew decided to take the second Curves frame that was manufactured. This particular frame was raised 3 inches in the downtube and stretched 6 inches back while meeting the frontend with a hearty 48 degrees of rake. Speaking of the frontend, the “built to work”-length (although Terry estimates it’s about 8 inches over) Springer was also procured from Redneck but modified by Trollworx to hold the one-off handlebars. The holes that normally hold the risers were welded up, and the bars were then welded directly to the area under the Springer’s top clamp. This keeps the top of the forks completely clean and gives the appearance of the handlebars growing out of the forks. To match the stance of the bike, a set of Xtreme Machine wheels was bolted up to the frame and forks. Keeping it simple meant no front fender, making the forks appear even larger than they already are. A low-profile 280mm rear tire was used to fill up the rigid tail section of the frame, while offsetting that girth was a skinny 21-inch Metzeler extending far in front of the frame.

Trollworx’s biggest challenge was fabricating the fuel tank, oil bag, and rear fender to be one with the frame: no seams, and no nuts, bolts, or tricky mounting tabs needed. To accomplish this feat, 16-gauge sheetmetal was massaged and molded into a gas tank that matched the shape of the frame’s backbone. The angles of the tank were mated perfectly with the neck angle at both the backbone and the downtube junctions. It had to match, as the tank was seamlessly TIG-welded to the frame. A custom oil tank was fabricated in-house and similarly welded to the area beneath the seat pan and in front of the contiguous rear fender. They were both fabricated as one piece. The only real indications that this is a functional unit are the copper oil lines that exit from the side of the tank. Many of their customers doubted they’d be able to pull off such a job when they described it, but the Trollworx crew pulled it off without a hitch.

Once all the welds were done, Todd prepped the frame and sheetmetal for paint. He carefully sprayed a burnt-orange Valspar acylic enamel basecoat in preparation for the graphics to be laid down. Terry contacted Mike Schartel, his friend of 20 years, to apply the variegated gold-leaf treatment to both sides of the sleek tank. Mike is one of those throwback guys who does all of his handiwork freehand. It’s amazing how both sides of the “Vale Madre” moniker match up, considering that no templates were used for the lettering. He’s been at it for more than 30 years, applying his trade to fire trucks, among other wheeled machines.

Todd also painted the spring legs of the forks, left motor mount, and the shifter cage and arm with a pewter-colored paint that had a flattening agent added in to give it a dull appearance

With the hard work done, the finishing touch was adding the 96-inch S&S; motor into the chassis. Filled with S&S; goodies, including a Super E carburetor, the mill is more than enough to propel the rigid quickly down the tarmac. A loud rumble emanates from the Trollworx custom-bent sinewy exhaust pipes. They were ceramic-coated to retain their appearance, with a short stretch of header wrap added to the front pipe to shield the rider’s leg from the heat. A six-speed tranny was mated to the motor and is actuated by a hand-shift setup fabricated by Todd. What’s the story behind the Tiki-looking head adorning the top of the shifter arm? It’s been in the family for years. The origins of the head are a mystery, but Todd acquired it from a ’56 Chevy station wagon he once owned. The head was used for the shifter on that old Chevy, so they thought it was an appropriate addition. It also reminded them of the masked Mexican wrestlers, fitting well with the Mexican-inspired name of this bike. The BDL clutch is controlled by an Accutronix hydraulic foot-operated lever.

So, you ask, “What does ‘Vale Madre’ mean?” In its most easily translated and intended way, it means “fuck it,” kind of useless, no good, who cares. It’s for all the naysayers who didn’t believe the Trollworx team could produce the bike they had in their minds. It was done their way, understated-devoid of the flash often associated with custom scoots. It’s what they wanted and they made it work; you have to look at the bike carefully to see how trick it is.

01. The Blazing Bikes lowering kit ($109) is comprised of a pair of split collar spacers, new cup washers, and […]

Ribs? Wings? The theme for each day’s Road Grub competition varies, so you’ll have to show up and see for […]