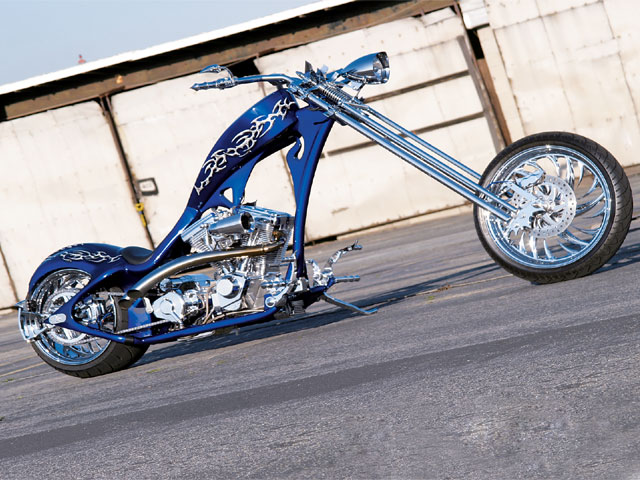 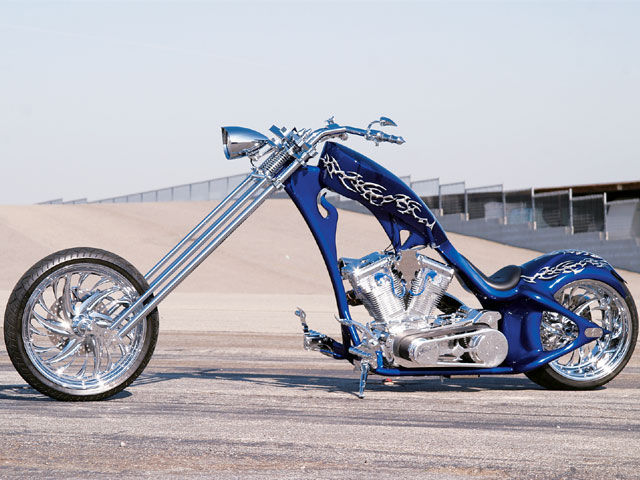 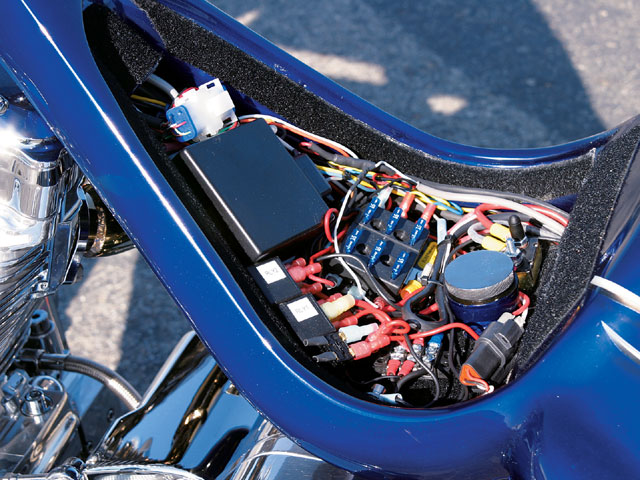 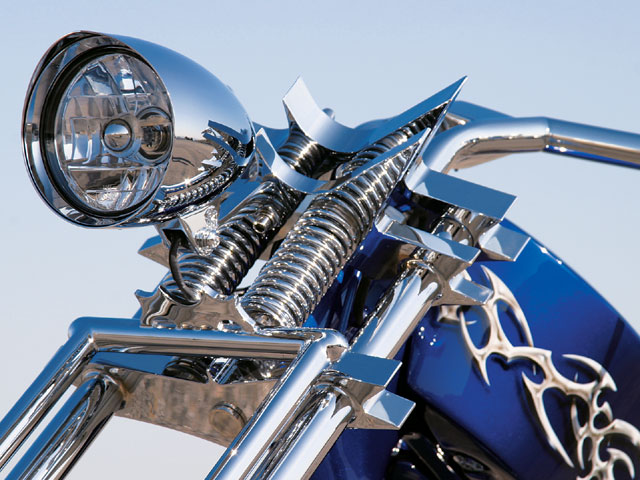 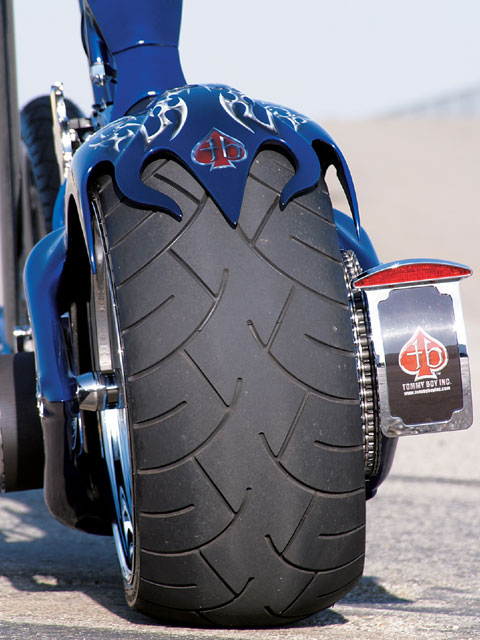 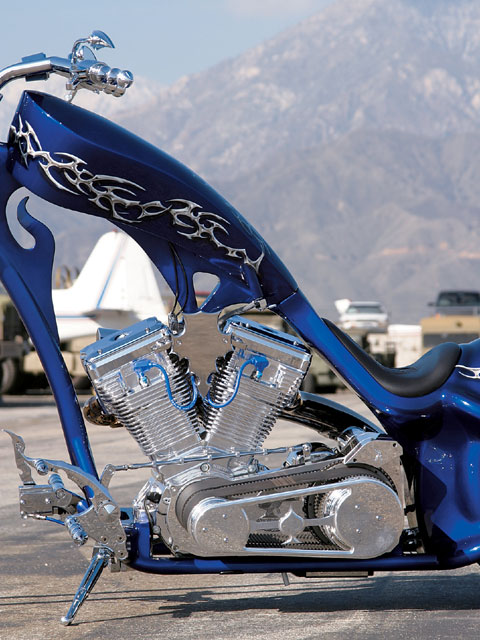 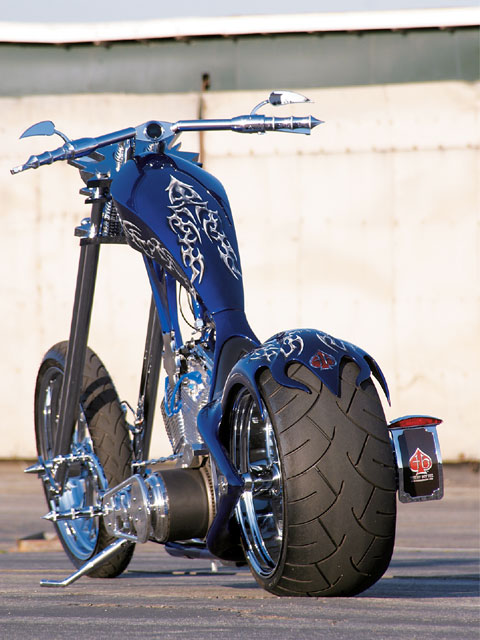 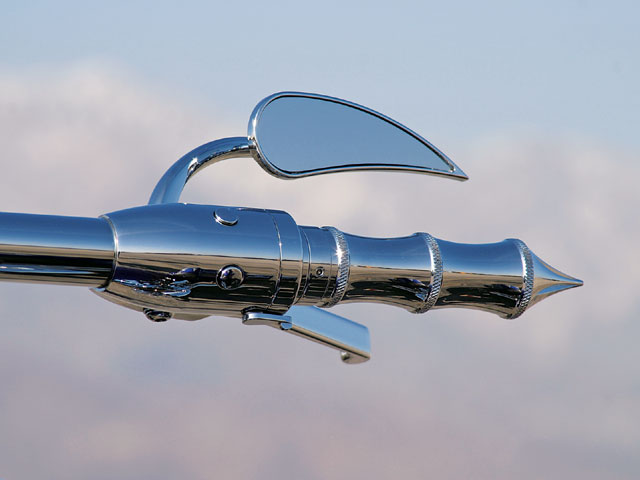 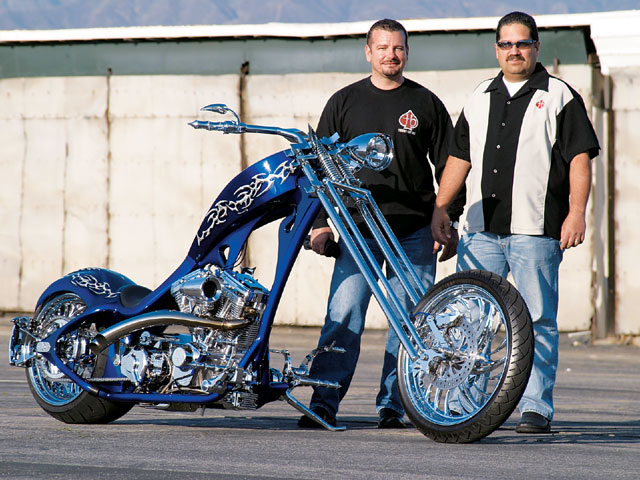 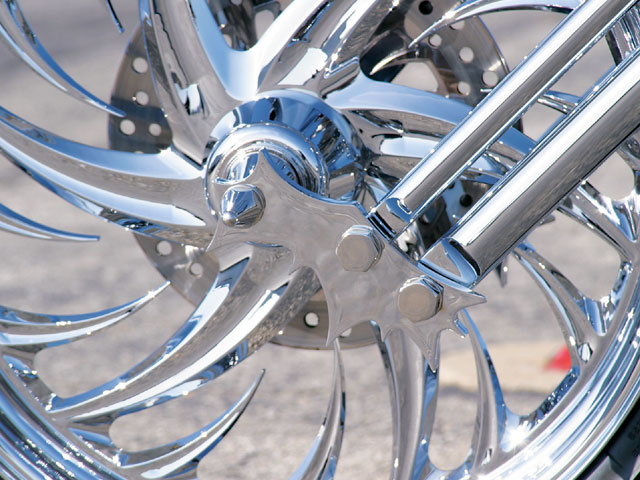 If the candy-blue base with silver tribal graphics, sky-high neck, extremely long Springer frontend, and fat rigid rear section of this bike look vaguely familiar, it’s most likely because you saw it splashed across the TV screen while watching the Speed Channel’s American Thunder show back in ’05. During the course of several episodes, the V-Twin-centric TV show highlighted the shop building this bike (Tommy Boy Inc. [TBI], located in Rancho Cucamonga, CA) followed the build, and even ran several minutes of film of Renegade star and motorcycle enthusiast Lorenzo Llamas test-riding this stretched-out, wide-tired chop.

Not too bad for a company that had just barreled out of the custom motorcycle gates. We guess the whole “right place at the right time” thing is true.

We had briefly caught a few seconds of the test-ride episode and were mildly impressed with the bike. However, a few months later while at the Laughlin River Run, we were about to turn the corner and make our way down the next row of vendors when a blinding glint of chrome shot off the neck of this super-stretched Springer.

After rubbing the stars out of our eyes, we dodged our way in and out of the path of gleaming chrome and made our way over to the bike. We were immediately impressed. The bike put off this ’60-’70s chopper vibe, only compiled with modern components.

Not only was this one of the longer frontends we’d seen in a while, but the neck was kicked up so high in the sky that the ol’ chopper gods had to be smiling. After inspecting the bike for several minutes, we were approached by Mr. Tommy Boy himself, Tom Amini, and his business partner, Harold Miller. We spent the next 25 minutes listening to the two of them discuss their debut tribal chopper.

Tommy and Harold chose to start with a Brighton Bike Works frame because it has the look and feel of a heavy piece of machinery, which was the overall intent for this bike; massive and durable with a tribal theme. With dimensions of 8 inches up, 10 inches out, 45 degrees of rake in the neck, and a rear rigid section wide enough to stuff a 280mm tire into, the Brighton frame met their criteria front to rear. Also, because of Brighton’s oil-in-the-frame design, it made for a low seat height, which only exaggerates the look of the extended height of the neck.

For that old chopper look and to keep an even plane between the lower framerails and the ground, TBI utilized a 10-inches-over Springer from Jeri’s Springers. Then, to incorporate the tribal theme of the bike into the frontend, TBI collaborated with Jer to cut a tribal design into the trees. When it came to the rolling stock, TBI got a sharp tribal look by using a set of Ego Tripp Impaler wheels.

With such a wide rear tire, the drivetrain was balanced out by running a Baker RSD six-speed transmission, which was tied to a 125ci Patrick Racing motor with a Karata 3-inch open beltdrive. TBI worked closely with Stainless Steel Creations to create a tight set of polished stainless-steel pipes (not chromed) that accented the lines of the bike.

When it came to paint, the guys at TBI wanted to make a statement but not overshadow the rest of the bike, so they had Jerry Gomez lay down all the wet stuff. To finish off the bike, TBI added tribal-themed Custom Cycle Controls hand controls and Accutronix grips, forward controls, and footpegs.

After listening to Tom and Harold talk about the debut chopper for their new company, it was obvious that they were excited and proud-as they should be. This first bike got them a lot of national exposure, both on American Thunder TV and in this feature in Hot Bike.

Some folks just like the way rigid frames ride and look. I am one of them. Words and Photos: Jeff […]