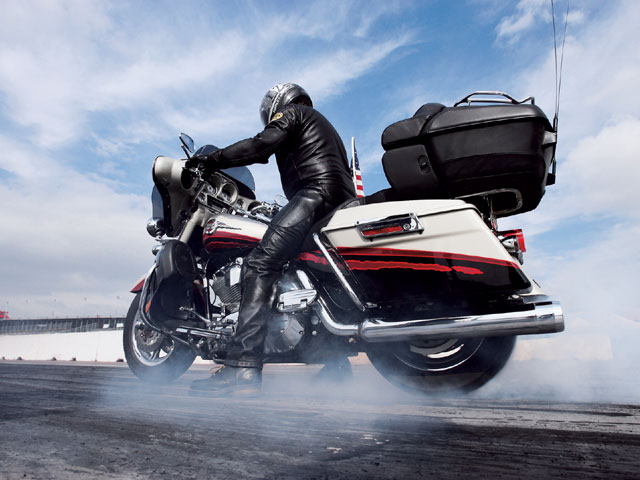 For years now Harley-Davidson has been known for making some of the best touring bikes anywhere. If you’re looking to ride long days as you roll up the miles on the odometer, you would be hard-pressed to find a better place to park your backside than on the saddle of an Ultra or one of Harley’s other touring models. It’s for that reason that for the ’06 lineup the guys in the CVO division have been busy designing and building an Ultra Classic with not only all the creature comforts you’ve come to expect but more…lots more.

CVO stands for “Custom Vehicle Operations,” which was started back in 1999, when Harley decided to turn a bunch of the P&A; guys loose and see what they could come up with. What has developed since then has been a team approach, with the likes of Willie G. Davidson and Louie Netz themselves having a hand in the design aspect. What began just a few short years back as a “what if?” project has turned into an elite department of the company turning out a varying number of highly anticipated, limited-production motorcycles.

It’s no secret that a lot of guys ride baggers these days. Just check out any rally or dealership, and you will see more touring machines than you ever thought possible. The problem a lot of riders have is the fact that so many of them look the same. In the past the remedy for this problem was to pull out the P&A; catalog and dig deep into your wallet as you dressed your bike up or down to suit your needs. Well, times are a-changin’. In addition to a couple of companies out there modifying some of the best of what Harley has to offer (Klock Works, www.kustomcycles.com; and Fat Baggers Inc., www.fatbaggers.com), the Motor Company has once again decided to offer a special CVO version of its Ultra Classic. If you are one of those guys who just can’t live without a bike outfitted with every bell and whistle, the CVO Ultra could be just the bike for you.

One thing that really sets the CVO Ultra model apart from the rest of the touring line is the selection of parts used in the bike’s assembly. Not only is the bike decked out with numerous components that are different from the stock bike, many of these parts are designed specifically for the CVO version. This goes a long way in adding to the style of the bike.

Other than all the bling, the most obvious departure from the stock bike is the use of H-D’s 103-inch stroker motor. Going with the proven Twin-Cam-style motor, the internal dimensions have been increased to add an additional 15 inches of displacement, giving the mill a 3.875-inch bore and a 4.37-inch stroke. Other differences include Screamin’ Eagle high-flow heads and Screamin’ Eagle 253 cams that are unique to the CVO 103. Lift on both intake and exhaust is .530 inch. On the outside, the motor wears a protective silver powdercoat and is adorned with some good-looking chrome covers denoting use of the Screamin’ Eagle model.

Getting the reported 100 lb-ft of torque to the five-speed transmission is the job of a wet-chain-drive primary and a hydraulically operated high-performance clutch. A standard Gates carbon-fiber-reinforced poly-chain belt makes the connection between the 32-tooth trans pulley and the 70-tooth wheel pulley.

The factory stuck with the stock tire sizes but decided to jazz up the wheels with the addition of a set of 16-inch six-spoke chrome slotted wheels at both ends. In addition, the braking system is a mixture of stock bagger components-four-piston calipers both front and rear, but it gets an added level of performance with a pair of 11-1/2-inch chrome floating rotors at the front and a single 11-1/2 incher at the rear.

Sheetmetal on the bike gets cleaned up by stripping all the trim from the front fender, while the hard saddlebags sit adjacent to filler panels set between the bags and the rear fender. Special tank badging and a smooth dash panel are added to give the fuel tank a distinctive look. And it doesn’t stop there-a front fairing complete with a chopped, smoked windshield; leather panel; and spun-aluminum-finished gauges finishes things up front, while down below a set of adjustable louver lowers keeps you warm in the winter and cool in the summer. Speaking of warm, the CVO Ultra comes complete with not only a set of heated grips but also a dual-control heated seat for both the rider and the passenger. Making sure the passenger has plenty of support is a wraparound backrest set into the leather-covered tourpak.

Harmon/Kardon designed and built the audio system that fits into the fairing. In addition to AM/FM, the system receives signals from XM, Weather Band, CB, single-disc CD, MP3 player, and intercom. Mounted in the lower portion of the passenger backrest is a pair of speakers. Making sure there is enough power to really pump out the sound is a 40-watt-per-channel amplifier.

The bike is available in three different paint schemes. Ours wore the Autumn Haze and Vivid Black paint combination. In addition to more chrome and billet goodies than you can shake a stick at, the bike is set up with a chrome-covered oil cooler, braided brake and clutch lines, cruise control, pushbutton gas-cap door, rider backrest, dual-bulb halogen headlight, front air deflectors, and 4-inch chrome mufflers complete with billet end caps. We could go on and on, but you get the idea. Check out Harley’s website for all the details.

Anyone who has ridden any of the bikes in the touring family will feel right at home on the CVO Ultra. This bike was meant to be ridden, and ridden hard. The firm saddle is a great place to navigate from. All the controls are within easy reach, but like so many other Harleys, this bike seems to be set up for folks under six feet tall. A quick flip of the ignition switch, and the On switch set the fuel pump in motion as the EFI system anxiously awaited. Once started, the bike ran smoothly with only an occasional cough when cold, but performance once warm was flawless. The additional 15 inches of displacement makes a huge difference on the heavy bike, especially when hauling a passenger or while loaded down. Speeding down the highway at 70 mph, the tach indicated the motor was spinning at 3100 rpm-not bad, but for a bike of this magnitude there is no excuse for anything other than a six-speed transmission.

For a big bike, the CVO Ultra is deceivingly nimble at both high and low speeds. We did scrape the floorboard mounts on a regular basis, but that’s what happens when you ride the bike hard. Fortunately, when the mount touches down it does not seem to upset the bike all that much. The short windshield has a tendency to swirl the air coming off it, resulting in a bit of buffeting around your head. This may or may not be an issue, depending on the height of the rider as well as what type of helmet (if any) is worn.

The ride comfort on this bike is second to none. The suspension’s ability to soak up bumps makes long days in the saddle a pleasure. Between the rear air shocks and the cartridge setup in the front, the bike eats bumps for lunch while leaving the rider able to enjoy his surroundings.

When you’re ready for a blast, just turn on the stereo and crank it up. The audio system does a very good jpb blasting out the tunes even at a high rate of speed, which is where many other systems begin to show their flaws.

If you’re looking for a bagger that will certainly stand out in a crowd while having the muscle to lead the pack, the Screamin’ Eagle Ultra Classic just might be right up your alley.

“The guys work on literally thousands of motorcycles a year.” Chances are you’ve already seen, and probably heard of the […]

Grind your coffee beans for a fresher, tastier cup of coffee. Any of these grinders will get the job done. […]

Adam Natonio Carey Hart We’re big fans of charitable organizations, especially when giving back pertains to the servicemen and -women […]