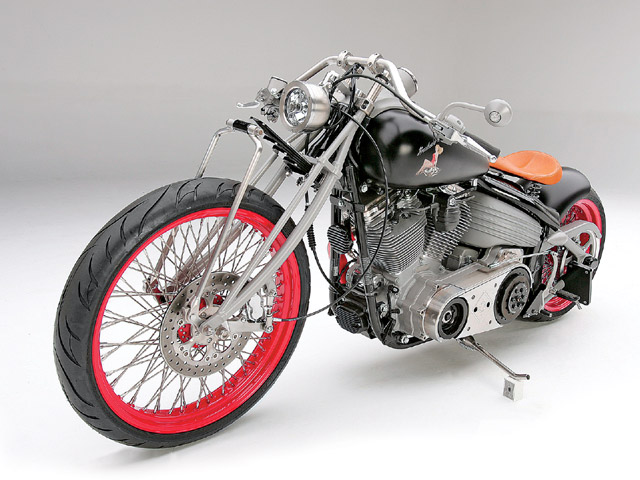 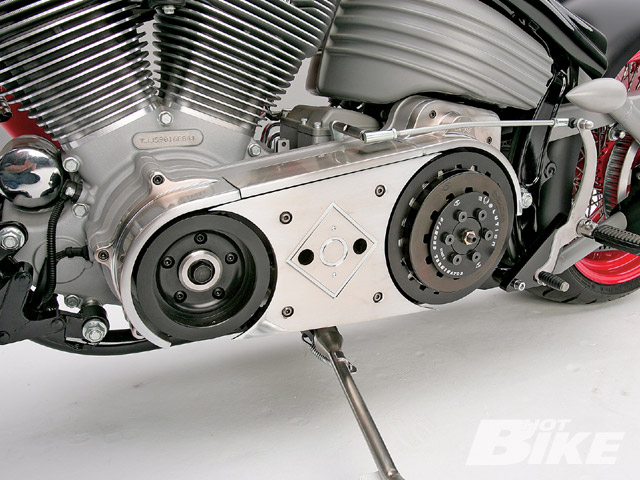 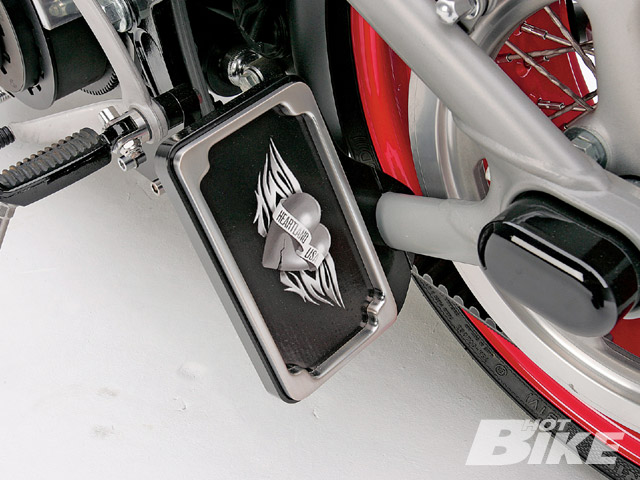 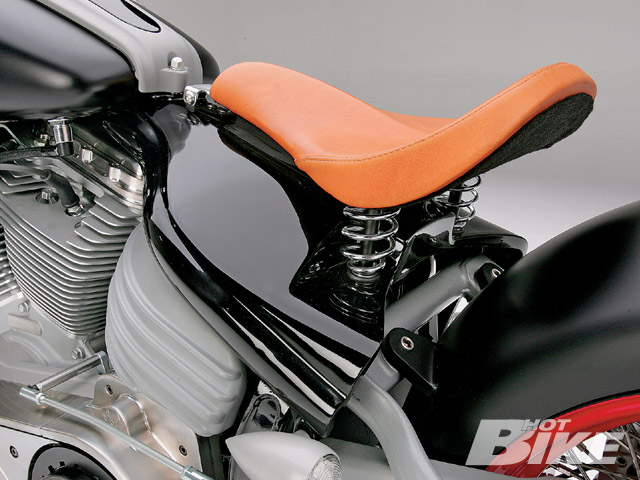 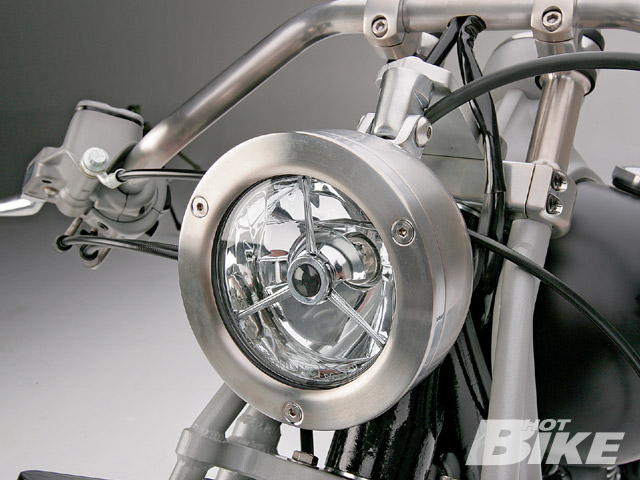 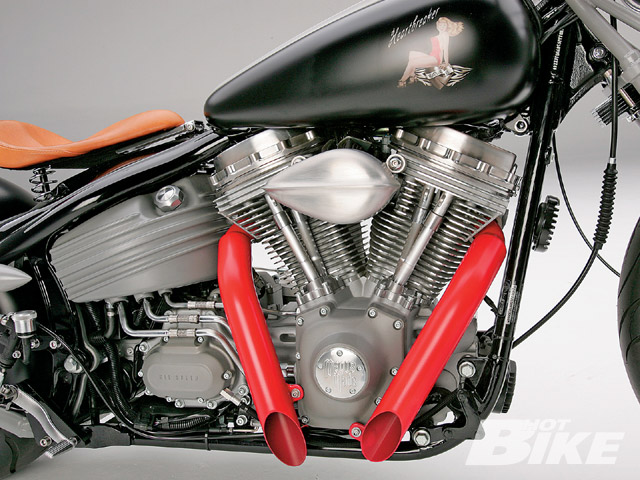 The combination of the Paughco Panhead rocker box covers and teardrop air cleaner cover, and the red coated MGS Lightning pipes help give this modern bike an old style look. 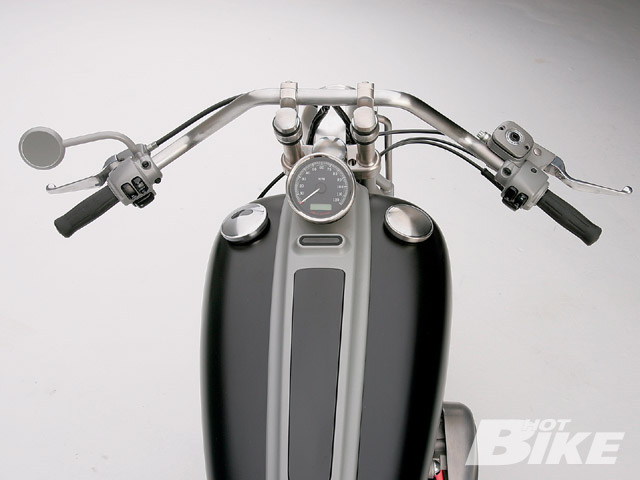 In order to get a more streamlined seating position Lonny mounted a set of Flanders bars upside down and backwards on a set of Custom Cycle Engineering’s Dog Bone risers. 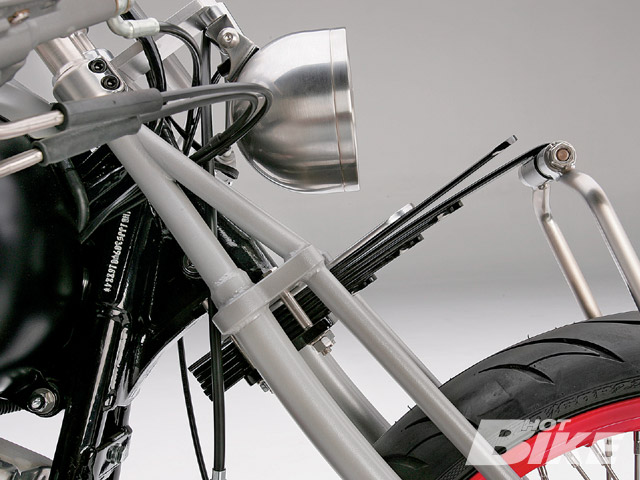 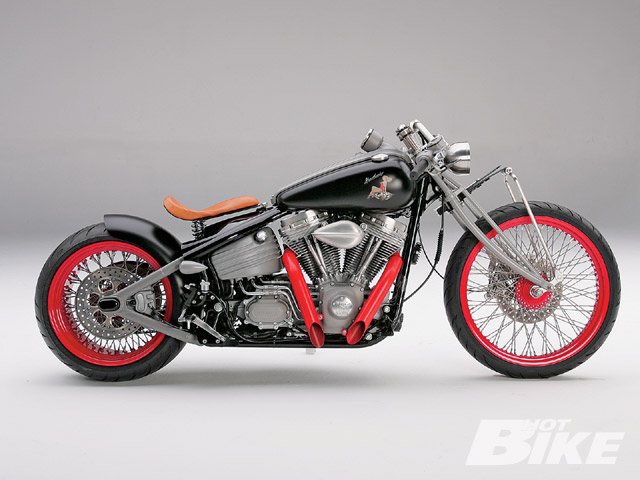 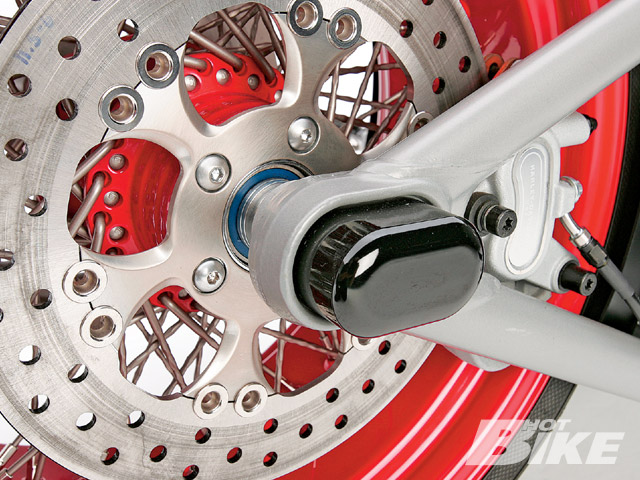 The Hearltand USA mirrors feature a blinker incorporated into the backside. However, with only the left front blinker/mirror on this bike apparently it’s only intended to turn left.

When the Rocker model was introduced back in July of 2007 as a new “radical’ direction for the Softail line it was met with mixed reviews. In fact, just like the V-Rod there are still those that just don’t “get it,” and never will. Some people will see a stock Rocker, walk right past it and go for something they can relate to or are more familiar with. Then there are those who see the Rocker as a challenge to try and make it into what might be a more appealing bike for the masses. Lonny Spiva, director of sales and marketing for Heartland USA falls into the latter category. We are not saying that Lonny thought that the stock Rocker was ugly, but when he first spotted it several years ago he definitely thought there was a lot of potential to turn the bike into a really good looking rider, not to mention a great opportunity to develop new parts and display the Heartland product line.

“I dreamt up this bike back in 2007 when I saw the new Rocker at the Sturgis convention center, during the Sturgis rally,” Lonny stated. “Later that evening, I spoke to Mike at Kiwi Indian over dinner and told him that I wanted to use one of his Leaf Spring frontends on a the new Harley Rocker and he liked the idea. So the concept moved forward from there. Once home and back at work I told my teammates at Heartland about the Rocker and what I thought we could offer the new model as an aftermarket parts supplier.”

One of the drawbacks to Harley introducing a new model is, who knows how long it can take for an interested buyer to actually get their hands on one. Sometimes waiting for a new model to arrive at your local dealership can be a good thing as it gives you time to save up a little extra scratch for that painful down payment. For Lonny the wait helped him continue to plan and design the build.

“With the basic idea in my head I Photoshopped a concept drawing so that I could see it on paper. There on the paper was the “Board Rocker.” It had an old boardtracker look to it, sleek and fast looking up front with a lay down rider position and the fat 250mm tire hanging off the back. I used this drawing to keep me inspired for the next 14 months until I could get my hands on a FXCW Rocker Standard. I talked to my friend Click Baldwin of Carolina Harley-Davidson about building the Board Tracker, but sadly Click passed away on his way to Sturgis in 2008. So I moved forward on the project with our Product Development Manager, Ted Parish.”

If you know anything about Heartland and its products then you’re familiar with its various 180, 200, and 250mm EZ Conversion and Bobber kits that come with fenders, struts, and seats for stock Softails. But Heartland also offers other items like lighting and mirrors and other accessories. Since a good portion of Heartland’s product line was developed around changing the look and stance of the ass-end of Softails, it seemed like a good place for Lonny to start with the Rocker.

“We already had products called 180/200 Bobber and 250 Bobber for existing Softails so once we were finally able to get our hands on a bike we refined the kit to fit the Rocker and called it the Rock-N Bobber conversion. This gave the rear of the bike the look I thought it needed.”

Through the development of the Rock-N Bobber kit, Lonny and Ted actually came up with two stages, depending on how much you want to change the rear of the bike or how much money you want to spend. Stage one consists of a leather seat (tan or black), a frame pan cover that hides the battery/electrical under the seat, and all the necessary hardware. Stage two incorporates everything from stage one but cleans up the back of the bike even more with a Bobber fender, billet teardrop LED taillights, plate holder, and a plate light. Once the rear section came together Lonny focused on the rest of the bike.

“I knew I wanted to use a patina finish on the chrome which would give the bike a semi used look, not too shiny. For the sheetmetal I wanted satin black paint with a pin-up girl on the tank like the bombers of WWII. As you can see from the side of the tanks, she’s called, The Heartbreaker. You have to love that nose art. I wanted to use enough of the stock bike so that the Rocker didn’t get lost in the build, but still have it all work in harmony with the newer parts. I wanted to give the bike a look as if you were racing a boardtracker in 2009, and in my opinion this is what it would look like. The normal forward foot controls wouldn’t work for the lay down position that is required for a racer. With the Flanders handlebars in place I came up with a riding position that was much like one of our co-workers’ Buell that he rides to work every day. With Buell foot controls in mind, we went online and bought a set on eBay and then Ted made the mounts that would allow us to bolt them to the bike and tie everything together.”

So after first seeing the bike in 2007, the dreaming and drawing for 14 months until he could actually turn his sketch to metal, Lonny and the Heartland USA team worked ’round the clock to get the bike ready for its debut at the 2009 V-Twin Expo in Cincinnati. And that’s exactly where we saw the bike and for the first time since the new model came out, fell in love with a Rocker.

“After finishing the bike and looking back at the concept drawing, it looks just like the drawing. I love it when a plan comes together. God Speed Click. The world misses you.”

Texas Hill Country is known for its scenic, curvy roads, and this time of year, plenty of wildflowers. Bryan Harley […]

Victory Racing experienced some highs and lows with racing this weekend after Project 156, ridden by Cycle World Editor Don […]